QAnon lunacy about harvesting live children plus the world of incels

QAnon lunacy about harvesting live children for  fictional super-powerful psychedelic, adrenochrome which came from Hunter S. Thompson, plus the world of the wacky incels.

Breaking news will be posted on the bottom of page. 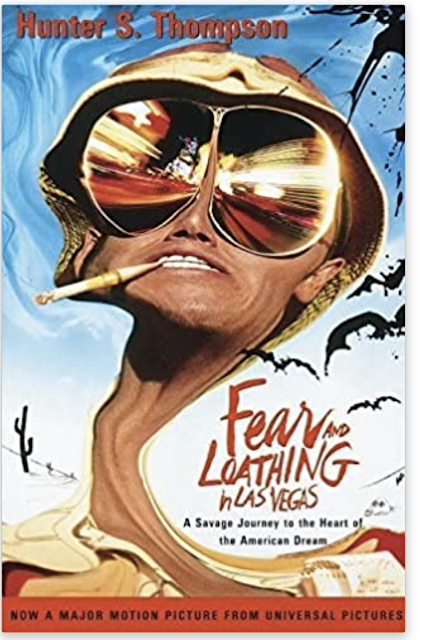 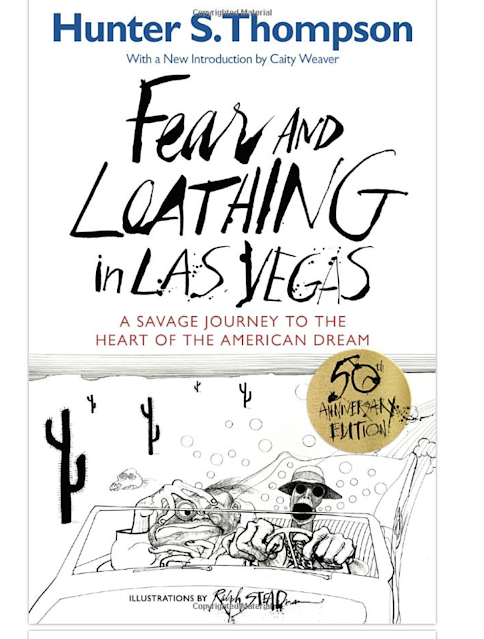 We now know where a belief central to the QAnon list of certifiably insane claims comes from.

Thom  Hartmann, American radio personality, author, former psychotherapist, businessman, and progressive political commentator took a deep dive into the "dangerous mental illness" of Donald Trump and how he has spread it to his followers. In doing this he reveals where one of the most bizarre claims coming from QAnon originated.

It came from the mind of American journalist and author who founded the gonzo journalism movement, none other than Hunter S. Thomspon.

The following is the portion of this long Thom Hartmann article which explains this.

When I was young my favorite writers were Ernest Hemmingway and Hunter S. Thompson, and my favorite Thompson novel was his Fear and Loathing in Las Vegas. Which is why a caller last year who started on a rant about Democrats harvesting “adrenochrome” from children caused me to both cut him off the air and go back to my copy of the novel to see if my memory was right.

Sure enough, there it was. Thompson was bemoaning running out of hashish and being almost out of opium when his “fat Samoan” sidekick offered an alternative:

“As your attorney,” he said, “I advise you not worry.” He nodded toward the bathroom. “Take a hit out of that little brown bottle in my shaving kit.”
“What is it?” “QAnon lunacy about harvesting live children came from Hunter S. Thompson,” he said. “You won’t need much. Just a little tiny taste.”
I got the bottle and dipped the head of a paper match into it.
“That’s about right,” he said. “That stuff makes pure mescaline seem like ginger beer. You’ll go completely crazy if you take too much.”
I licked the end of the match. “Where’d you get this?” I asked. “You can’t buy it.”
“Never mind,” he said. “It’s absolutely pure.”
I shook my head sadly. “Jesus! What kind of monster client have you picked up this time? There’s only one source for this stuff…”

He nodded.
“The adrenaline glands from a living human body,” I said. “It’s no good if you get it out of a corpse.”

When Thompson pushes his “attorney” about where the adrenochrome came from, the fictional character tells the fictional tale of having once been hired to represent a child molester/murderer who’d presumably extracted it from one of his victims:

“Christ, what could I say?” Thompson’s sidekick told him. “Even a goddamn werewolf is entitled to legal counsel. I didn’t dare turn the creep down. He might have picked up a letter opener and gone after my pineal gland.”

That little seed, entirely fictional, planted in the national subconscious back in the early ‘70s, has now blossomed into a full-blown flower of a belief held by literally millions of Americans.

As Rightwing Watch documents, uber-Trump cultist and “journalist” Liz Crokin explains in one of her many videos:

“Adrenochrome is a drug that the elites love. It comes from children. The drug is extracted from the pituitary gland of tortured children. It’s sold on the black market. It’s the drug of the elites. It is their favorite drug. It is beyond evil. It is demonic. It is so sick.”

People who have been ensnared by the

QAnon cult and are gullible enough to believe this kind of thing are the explicit targets now in Trump’s crosshairs....

There is another group being courted by Trump which is every bit as weird as the QAnan cray-cray. These are young men who consider themselves to be proud and superior Incels.

This is explained in this Salon article: 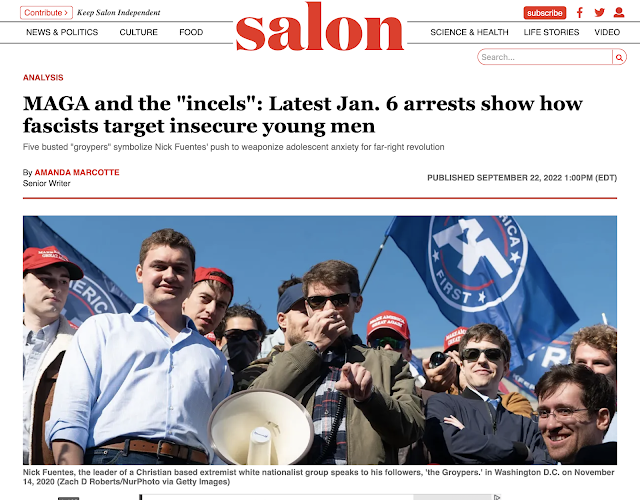 The affidavit blandly describes America First, an ardently pro-Trump group, as motivated by "a belief that they are defending against the demographic and cultural changes in America." The deeper truth is this group — whose members call themselves "groypers" — is among the most shamelessly fascist of the many far-right gangs that invaded the Capitol that day. Their leader, Nick Fuentes, has declared that "Trump was awesome because he was racist," engaged in Holocaust denialism and heaped praise on various historical dictators, including like Joseph Stalin and Adolf Hitler. Indeed, he did the latter at a conference attended by Republican Reps. Marjorie Taylor Greene of Georgia and Paul Gosar of Arizona, signaling how far Fuentes' fascist worldview has crept into the Republican Party.

It's not just that Fuentes and other groypers identify as "incels," a nickname for the virulently misogynist online movement of "involuntary celibates." Fuentes has tried to reinvent "incel" as an aspirational identity, telling his followers that pursuing sex with women is degrading and will only distract groypers from their true calling as warriors for the brand of white nationalism (mixed with far-right "trad" Catholicism) he's peddling. As Tess Owen at Vice reported in July, "Fuentes has called himself a 'proud incel,' urged his supporters to abstain from sex, and made bizarre assertions like 'all sex is gay.'"

No, seriously, this is his argument for why heterosexual sex is "gay": "Think about it this way: What's gayer than being like 'I need cuddles. I need kisses … I need to spend time with a woman.' That's a little sus."

Wikipedia hasn't been able to copyright the term Wiki so it isn't surprising that there are lots of websites using the word, and there's even this one: 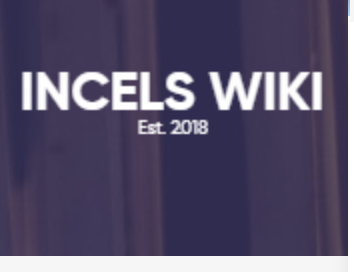 Two from the BBC:

The woman who founded the 'incel' movement 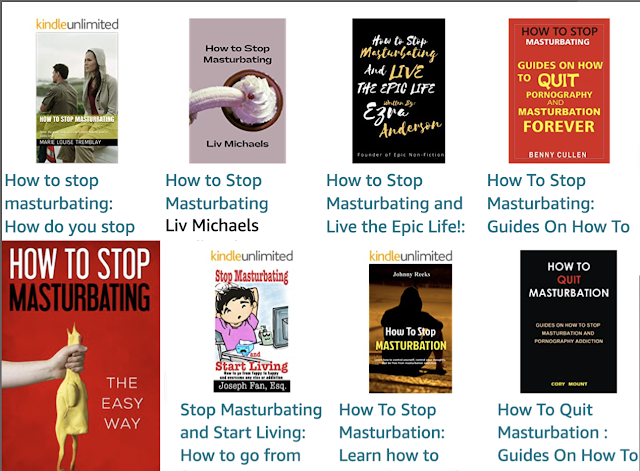 Instead what will inevitably happen is that almost all of the men in the group of incels will eventually go stark raving mad with pent up sexual frustration unless they decide to pursue healthy sexuality whether it is with solo sex or with a partner.

Rioting on January 6th might have been a temporary sexual release, but how many of these men went to bed that might and had a wet dream about storming the Capitol and experienced an orgasm when they marched like maniacs carrying their stupid Trump flags? 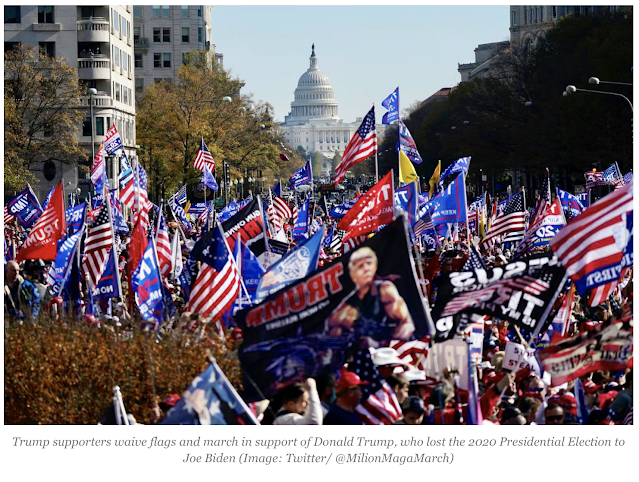 Search Google for Trump flag images.
Perhaps is is ironic that Trump is a serial molester of women and adulterer. He is their titular leader if not their divine gift from God or the Second Coming and may or may not be currently involuntarily celebrate depending of what sexual favors Melania deigns to bestow on him.
I have an impression that he likes golfing because using his little putter is for him a phallic symbol which he  believes demonstrates his sexual prowess whenever he sinks a ball. 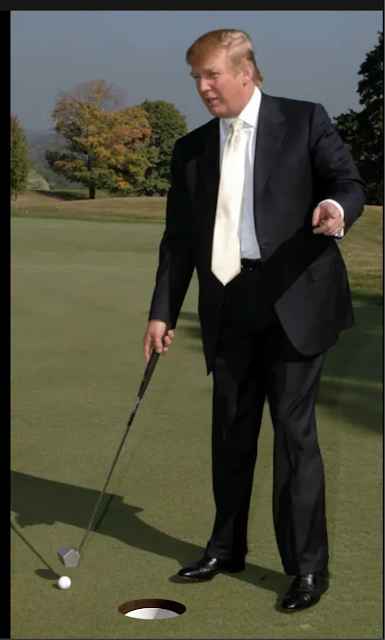 That was one crazy romp.
Offering, that masturbation as a means of relief or relaxation, whether male or female, is so poorly understood by people who cannot figure out that vaginal sex without protection leads to pregnancy (and STI). They don't get it.
People who read, people who can comprehend the way reproductive biology works in mammals get it, but the people who are following Orange One seem to have trouble understanding a potato.
Truthfully, incels needn't worry about getting a girl pregnant.
Most girls wouldn't waste the time of day on these killer clowns.
Still a pretty insightful tour of Hunter Thompson's weirdness.