with due credit to Mother Goose and Lewis Carroll

Read all of Chapter Six here.

More of the above excerpt:

And only one for birthday presents, you know. There's glory for you!'

Humpty Dumpty smiled contemptuously. 'Of course you don't — till I tell you. I meant "there's a nice knock-down argument for you!"'

'When I use a word,' Humpty Dumpty said, in rather a scornful tone, 'it means just what I choose it to mean — neither more nor less.'

'The question is,' said Alice, 'whether you can make words mean so many different things.'

'The question is,' said Humpty Dumpty, 'which is to be master — that's all.'

If you don't recall the final demise for Humpty, here it is:

'I shouldn't know you again if we did meet,' Humpty Dumpty replied in a discontented tone, giving her one of his fingers to shake: 'you're so exactly like other people.'

'The face is what one goes by, generally,' Alice remarked in a thoughtful tone.

'That's just what I complain of,' said Humpty Dumpty. 'Your face is the same as everybody has — the two eyes, so —' (marking their places in the air with his thumb) 'nose in the middle, mouth under. It's always the same. Now if you had the two eyes on the same side of the nose, for instance — or the mouth at the top — that would be some help.'

'It wouldn't look nice,' Alice objected. But Humpty Dumpty only shut his eyes, and said 'Wait till you've tried.'

Alice waited a minute to see if he would speak again, but, as he never opened his eyes or took any further notice of her, she said 'Good-bye!' once more, and, getting no answer to this, she quietly walked away: but she couldn't help saying to herself, as she went, 'of all the unsatisfactory —' (she repeated this aloud, as it was a great comfort to have such a long word to say) 'of all the unsatisfactory people I ever met —' She never finished the sentence, for at this moment a heavy crash shook the forest from end to end.

Indeed the crash shook the forest from end to end. Democracy and truth loving Americans can only hope for such a story tale ending to befall (pun intended) Trump and his MAGA Republicans including all the Tweedledees and TweedleDums who like, in "Thorough the Looking Glass," never contradict each other, even when one of them, according to the rhyme, "agrees to have a battle". Rather, they complement each other's words.

Look closely, it does say MAGA on their caps.

Of course we have quite a few of these: 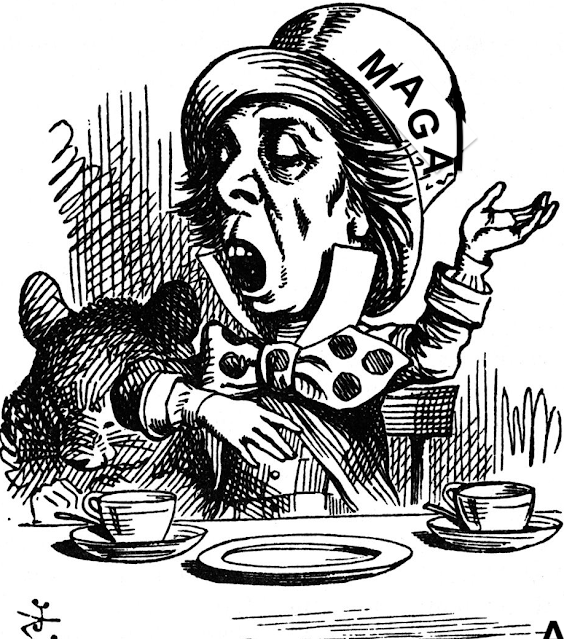 Don't get me going on who the Queen of Hearts would be. Hint: He screams a lot. 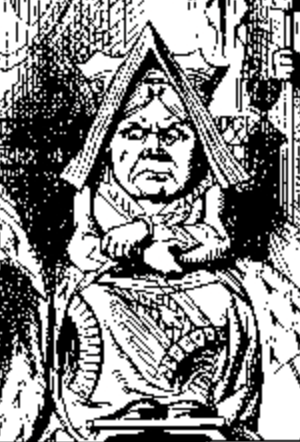 I'm not the first to compare the United States under Trump and his cult to being something even Lewis Carroll might have had trouble believing could happen in real life in his own England or the fledgling democracy across the ocean which had fought a civil war during his lifetime and was becoming one of the world's greatest democracies when he died in 1898. (He wrote Alice's Adventures in Wonderland in 1865) and its sequel Through the Looking-Glass in1871.)
I haven't given up on Elon Musk. Comic 6 is here.