Can Trump resist starring in the drama of testifying?

Can Trump resist starring in the drama of testifying?
By Hal Brown
Previous editions in archives >>>: 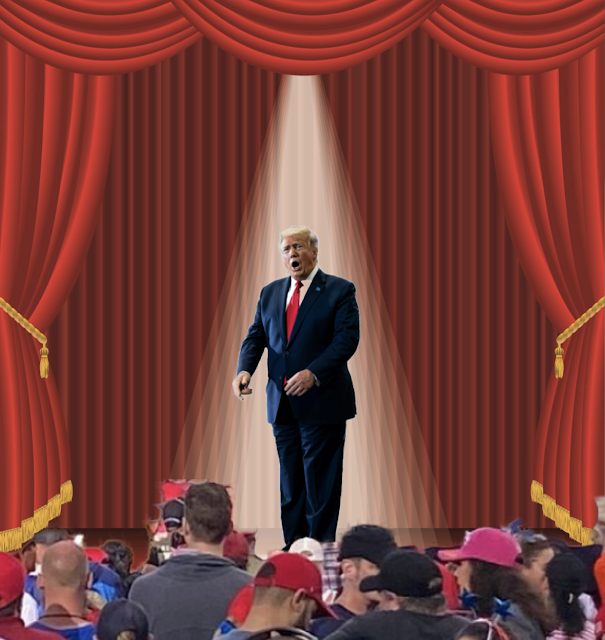 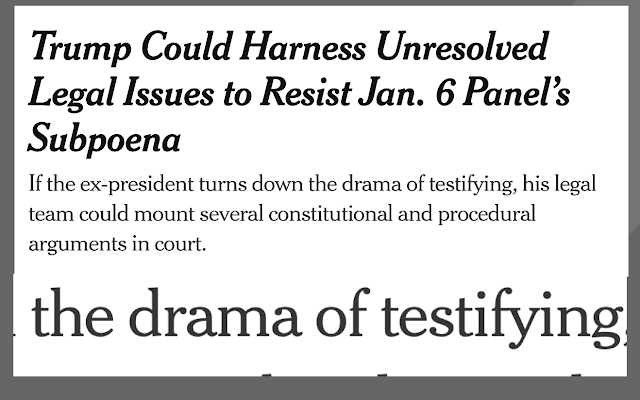 From The NY Times: In the most basic sense, any legal arguments seeking to get Mr. Trump off the hook would merely need to be weighty enough to produce two and a half months of litigation. If Republicans pick up enough seats in the midterm elections to take over the House in January, as polls suggest is likely, they are virtually certain to shut down the Jan. 6 committee, a move that would invalidate the subpoena. NY Times

A few words (my bold) in The New York Times subtitle ("If the ex-president turns down the drama of testifying, his legal team could mount several constitutional and procedural arguments in court") of all that I've seen, comes the closest to addressing my speculation though there's nothing about it in the article itself.

The photo they used does suggest how much Trump likes to have the spotlight on him. 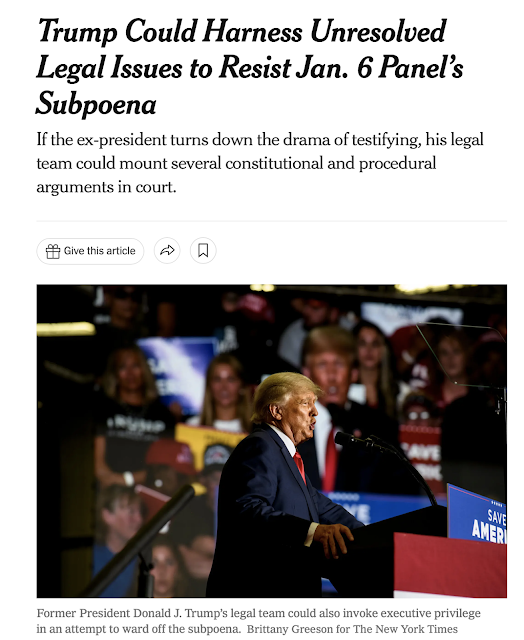 I am stuck on this subject because it seems that anybody with a public forum is saying Trump will wait out the clock hoping that the GOP takes control of the House in January and dissolves the J6 Committee.

This presupposes he doesn't want to have the ginormous megaphone which such testifying would give him as long as the Committee acceded to his demand that his appearance be televised live. I am hearing that he could end up testifying for two or three days.

Accepting the subpoena and testifying live would make must-see television for both his cult who want to see him make fools of his interrogators and those who want to see the J6 Committee members and their lawyers eviscerate him.

He does have another option, albeit a lesser one, aside from insisting his testimony be live.

What Steve Bannon did after his trial, which wasn't televised, gives him another way to gain public attention. 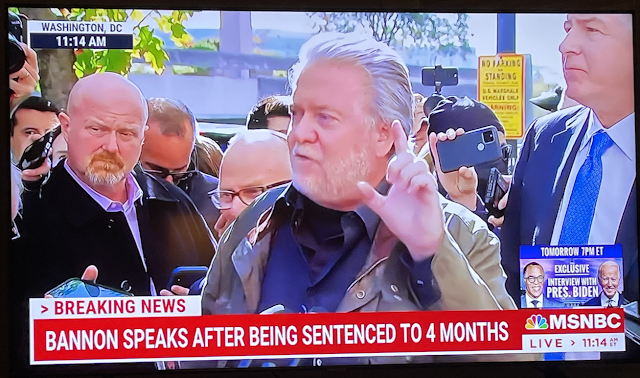 Steve Bannon is a boisterous buffoon and I doubt many hardcore Trumpers take him all that seriously. Some may even wonder why Trump allows himself to have his photo taken with him, even when it looks like he's holding his breath so as not to inhale the noxious fumes I can imagine emanating from the man who looks like he hasn't bathed in a week. 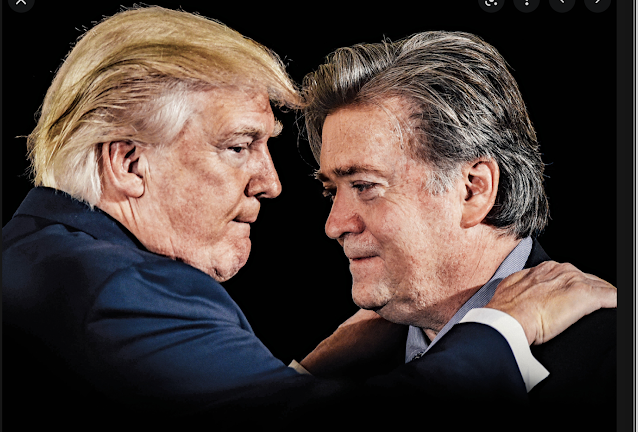 You may notice that if you do an image search for the two of them most show them a fair distance apart from each other.
Donald Trump, to his cult, is their epideictic emperor, not that many even know the meaning of the word epideictic.

Trump could decide that he could testify behind closed doors because he knows that he'd have the opportunity to say anything he wanted and have his remarks (or rant) televised on every station afterwards.

Bannon took only a few minutes but Trump could go on like he does at his rallies for as long as he wanted to. He knows that networks, even Fox News, have stopped broadcasting his rallies.  I am sure Trump misses this. Each network just broadcasts what they think are newsworthy snippets.

Trump may not be willing to admit it to himself, at least not fully, but at some level I think he knows he needs to revamp his act because his performance has gotten stale to all but his most loyal cult members.

If he made a speech after testifying in private I think it would be covered, if not in its entirety, for a long time on most networks. I can see MSNBC and other stations cutting away if and when he starts repeating himself and lapses into an unhinged string of lies and grievances.

Regardless, he would be able to star in his own show without being interrupted by pesky interrogators and, like Bannon did, he'd refuse to take questions from reporters 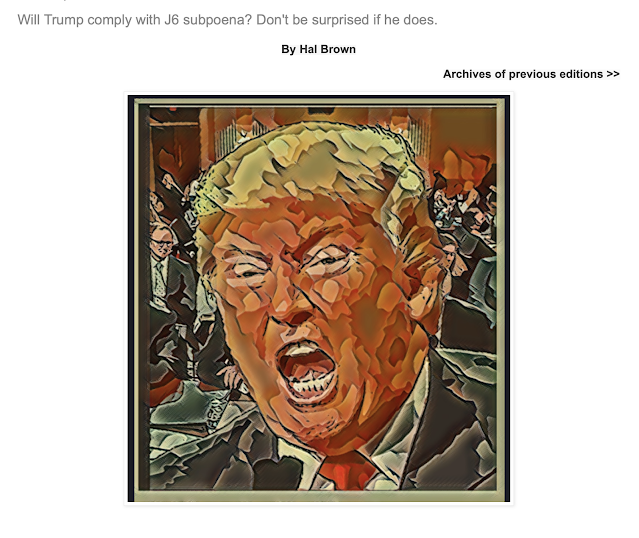 Just announced: Bannon will get four months in prison and minor $6500 fine but can stay out of prison while he appeals and this could take a year.

It is being reported that his appeal will rely on his claiming he relied on an a "advice of counsel" defense.

First his lawyer spoke and said they had a "bulletproof" appeal. 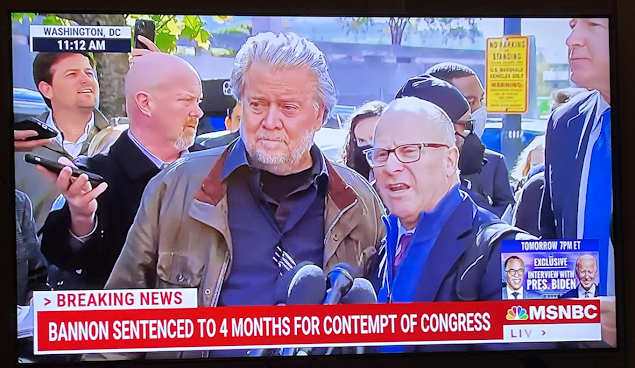 Then Bannon took to the microphone and made a diatribe. He lambasted the Democrats and Nancy Pelosi. He said the Biden regime will end after the election and Merrick Garland will be the first attorney general to be brought up on charges and impeached. 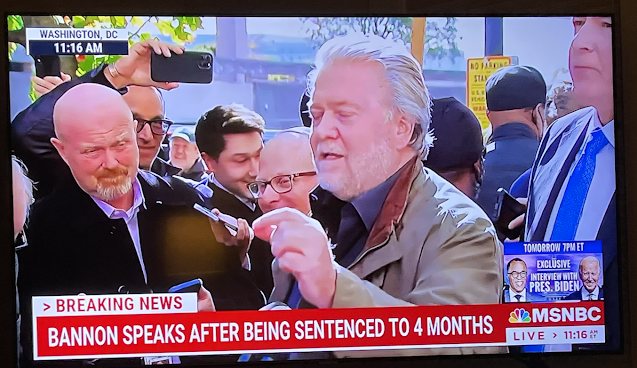 My impression of Bannon's affect and demeanor belied what his words were saying. He seemed far more subdued than usual. He claimed he'd win an appeal but he isn't delusional. He knows that the chances of winning the appeal are slim despite what his lawyer said and down the road there is a very good chance he will spend time in jail.
Where would be held if he was indicted?
"Since contempt of Congress is a federal misdemeanor being prosecuted in DC, White suggested that Bannon would be held in the DC Jail for lockup. The jail holds inmates who either have been sentenced for a misdemeanor, or are awaiting trial. However, depending on space and other factors, the Bureau of Prisons could decide to send him to another minimum security lockup outside of the District." Reference. 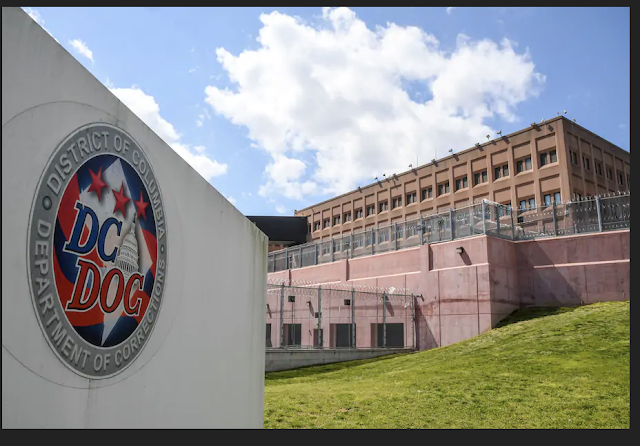 It's obvious that the accommodations are a far cry from what he's used to. Four months isn't four years. It isn't even a year. He might even get time off for good behavior. Still, any time spent living in a cell and having to comply with orders from prison guards will be a new experience for Bannon. 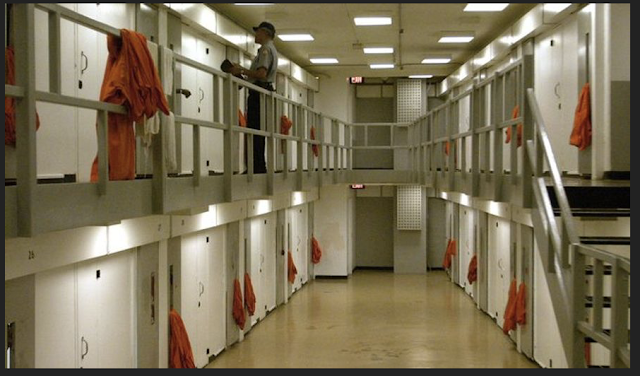 This is where Bannon lived in Washington: 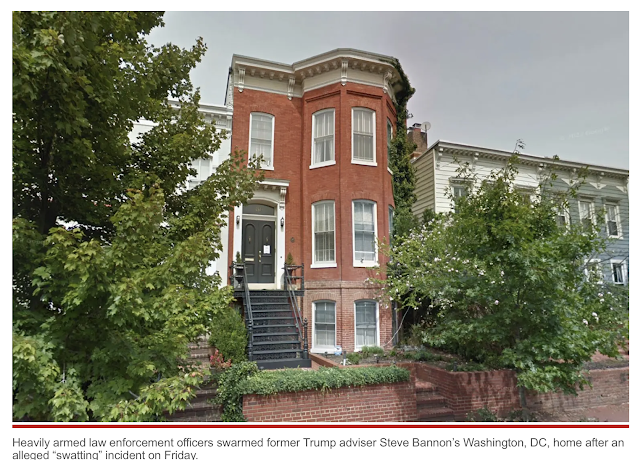 (From https://nypost.com/2022/07/08/armed-police-swarm-steve-bannons-dc-home-in-swatting-incident/)
It isn't a mansion but obviously non-too-shabby compared to the DC slammer.
Remember this Steve Bannon form November 16, 2021?

This is an explanation of why this conviction and sentence matters from CNN:

It was a victory for the House Jan. 6 select committee as it continues to seek the cooperation of reluctant witnesses in its historic investigation. It was also a victory for the Justice Department, which is under intense scrutiny for its approach to matters related to the Jan. 6 attack.

Bannon is one of two uncooperative Jan. 6 committee witnesses to be charged so far by the Justice Department for contempt of Congress. Trump White House adviser Peter Navarro was indicted by a grand jury last month for not complying with a committee subpoena and has pleaded not guilty.

Lot's on news when I started watching TV this morning about how much jail time Steve Bannon will serve this morning. Below is Bannon expressing his usual defiance before entering court this morning:

I was looking forward to seeing his being led out the the courthouse in cuffs to the Department of Corrections paddy wagon. Unfortunately because this is a misdemeanor he won't be taken into custody immediately. Rather he'd be given a date when and where he has to surrender to the authorities.

Bannon lost this Hail Mary Mother of Me pass (below): 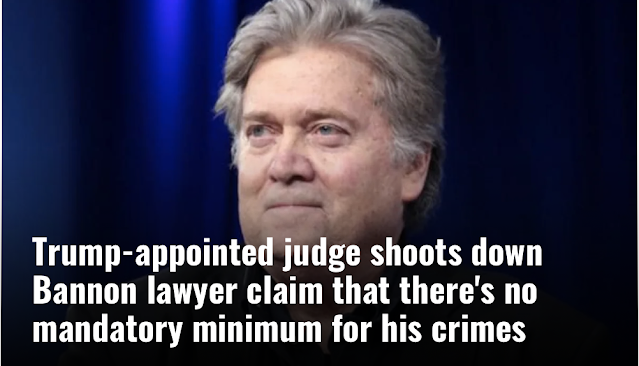 Then there's this from the Above The Law website:

The subtitle says it all: Good luck, buddy.

In preparation for Steve Bannon’s sentencing hearing Friday, he and the government both submitted sentencing recommendations today. Unsurprisingly, they have very different thoughts on what should happen to the rightwing podcaster after a jury found him guilty of two counts of contempt of Congress for defying a subpoena for documents and testimony from the January 6 Select Committee.

Prosecutors suggest six months in the hoosegow plus a $200,000 fine, emphasizing that Bannon has “consistently acted in bad faith and with the purpose of frustrating the Committee’s work.”

Here's more from this article:

Perhaps cognizant that promising to go “medieval” on his opponents and describing Judge Carl J. Nichols as conducting “the Moscow show trial of the 1930s” does not necessarily bespeak chastened regret, Bannon’s brief exhorts the court to look beyond the law and dream big.

The ear of a sentencing judge listens for the note of contrition. Someone was convicted. Did they learn their lesson? This case requires something more. It involves larger themes that are important to every American. Should a person be jailed when the caselaw which sets forth the elements of the crime is outdated? Should a person be jailed for the doing the exact same thing that was done by the highest law enforcement officers in this country, yet they received no punishment?

Bannon seems to be both threatening the judge and daring him to do something about it. It doesn't seem to be an indication that he is thinking rationally. The judge ultimately will decide his sentence.

I am hoping he gets the full six months that the prosecution is asking for.

We should know soon. Currently this is what is on MSNBC with report that the outcome will be announced any.moment. 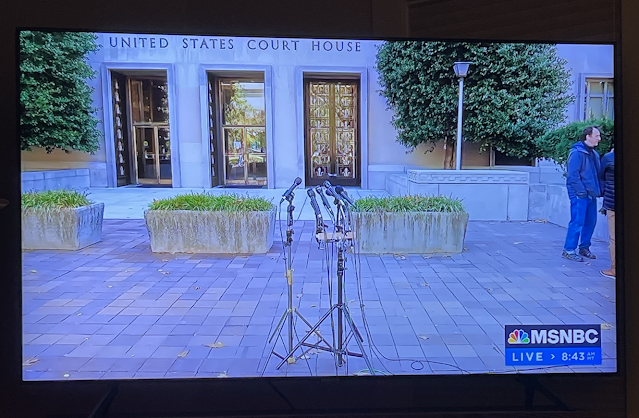