Is there a vaccine to inoculate America against the smart and sane fascist anti-woke Ron DeSantis?

Is there a vaccine to inoculate America against the smart and sane fascist and anti-woke Ron DeSantis? The hypocritical culture warrior, fascist, and overall  P.O.S.  just did a 180 on Covid. 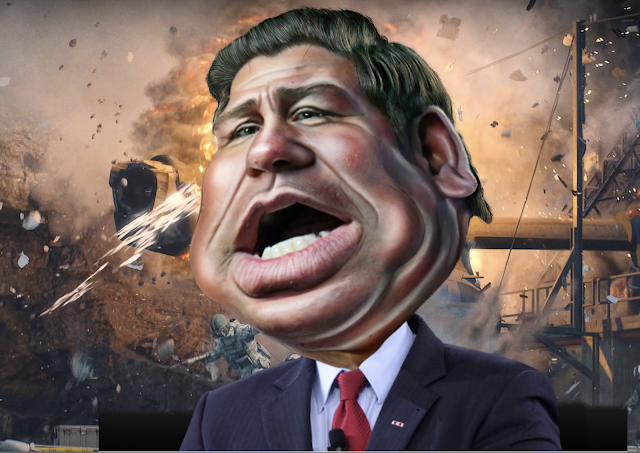 Preface: A big thanks to DonkeyHotey

The caricaturist who goes by the name DonkeyHotey (pronounced Don Quixote) has already provide writers with numerous illustrations for articles about the man who is looking like he will be the GOP candidate to president in 2024.

I have used his caricatures numerous times as have many well known websites. Here's a story about his best 2021 caricatures.
Note the illustration he posted on Dec. 11th on Who, What, Why of Trump here.
You can follow DonkeyHotey on the sites below:
flickr.com/photos/donkeyhotey/https://whowhatwhy.org/author/donkeyhotey/https://twitter.com/DonkeyHoteydonkeyhotey.com
@DonkeyHotey@mastodon.coffee
About DonkeyHotey
Today's story
Ron DeSantis is Trump without the stupid red MAGA cap to cover up is male pattern baldness. He has full head of hair. He still believes that to make America great it has to go back at least 100 years.
We know DeSantis will take any position, and change any of them, if he thinks it will help him achieve his political ambition to be president. Here's an example from the news today.

This was then: DeSantis recommends getting vaccinated 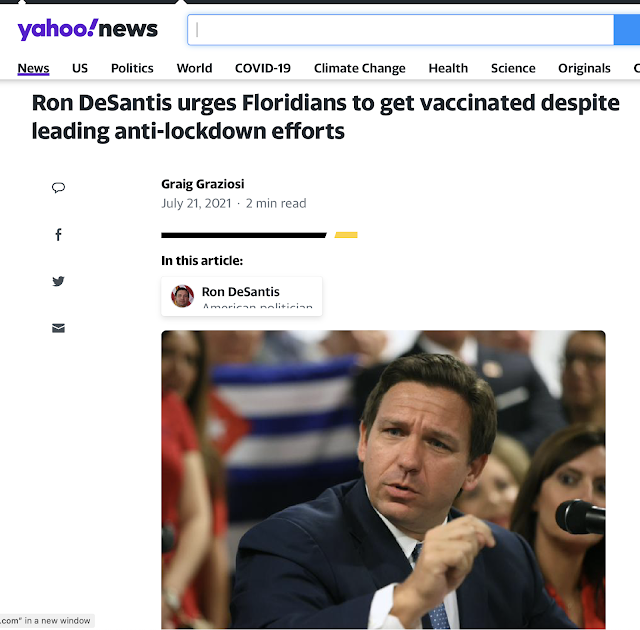 Democrats can't do a damn thing about which Republican ends up running. Most of them who I've read or heard believe Trump would be the easier candidate to defeat. They can wish Trump would be the candidate, but the various iterations of the saying "if wishes were fishes..."  applies here.
It will be interesting where never-Trump Republicans will come down if the candidate is DeSantis. By now it is a political trope to say that DeSantis is an intelligent and sane version of Trump. He's not about to cozy up to the likes of Ye and Fuentes. He won't tweet barely coherent paranoid rants.
Pundits are not only saying he is more likely to win against Biden or any other Democrat should Biden not run than Trump, but polls support this: 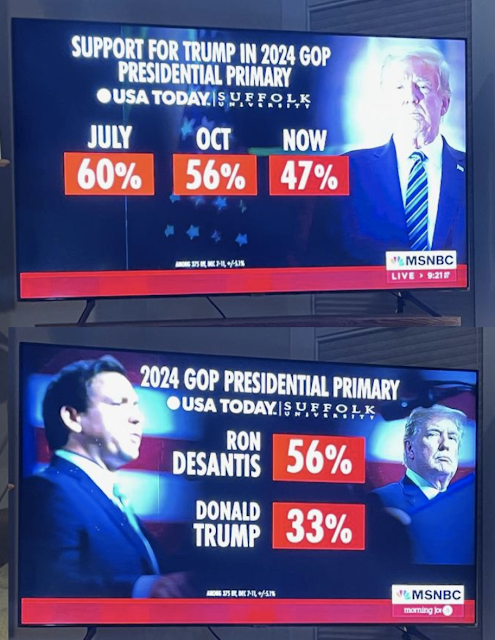 My impression from reading and listening to never-Trump Republicans is that most of them want to see a tradition conservative run rather than someone who is waging culture warfare and wants to be an anti-woke autocrat.
Nicholas Kristof was on Morning Joe this morning discussing his NY Times column from Dec. 10th Trump Struggles but American is Still Feverish. 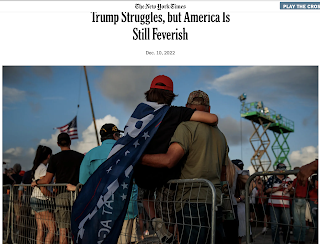 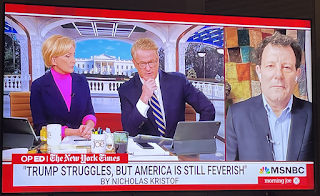 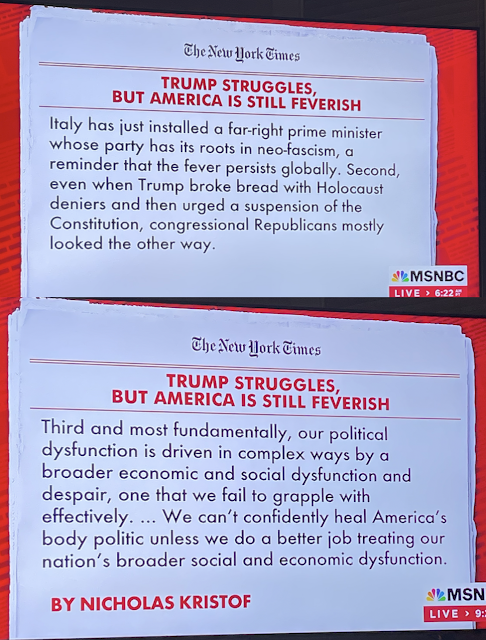 Excerpt addressing whether the defeat of Trump endorsed and Big Lie supporting Republicans means the fever has finally broken:

But I may be wrong — and I worry that it’s premature to argue that the national fever has broken. We as a nation still face arguably the greatest peril since the end of Reconstruction, for three reasons.

First, remember that this extremism goes beyond Trump and even beyond the United States. Italy has just installed a far-right prime minister whose party has its roots in neo-fascism, a reminder that the fever persists globally.

Second, even when Trump broke bread with Holocaust deniers and then urged a suspension of the Constitution, congressional Republicans mostly looked the other way. When leaders of one of our major political parties struggle to defend the Constitution or condemn neo-Nazis, America still feels feverish.

Third and most fundamentally, our political dysfunction is driven in complex ways by a broader economic and social dysfunction and despair, one that we fail to grapple with effectively.

If DeSantis runs, and wins, I think it will demonstrate that like the chicken pox virus does, it went dormant in the body and then emerged as a horrible case of shingles.
There's a vaccine, Shingrix, to deal with that. It requires two doses several months apart to be effective. If you have had it or know anybody who has, you are well aware of how bad it is.
If we extend this metaphor, and I haven't met many metaphors I'm not willing to extend if they make sense, we can say that America got the first dose of anti-fascist conspiracy theory destroying vaccine to deal with the disease of Trumpism. Now they need the second dose to prevent infection with DeSantisism.
Update: 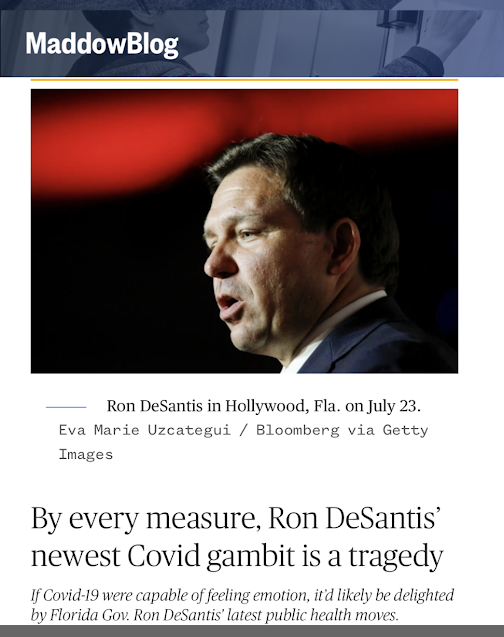 By every measure, Ron DeSantis’ newest Covid gambit is a tragedy

In this fanciful hypothetical, we could probably imagine what the politicians would be told to say and do by Covid’s lobbyists. Officials would be encouraged to, among other things, question the efficacy of vaccines, while rejecting the findings of public health authorities.

Or put another way, if Covid-19 could hire its own lobbying team, it’d be delighted by Florida Gov. Ron DeSantis and his latest announcement.

Addendum:
Thanks to A. my partner and percipient proofreader for reminding me of this.
There is one outcome we can hope for, though we can't to anything to make it happen. This is that Trump loses the primary, whether to DeSantis or anybody else, and decides to run as an Independent. His psychopathology strongly suggests he would do this. He doesn't have any loyalty to the GOP or anyone in it with the exception of his dwindling number of sycophants.
Doing this keeps him in the public eye until Tuesday, Nov. 7th 2023 when he splits the vote assuring an easy Biden win. He can have his rallies and spew his hate speech and paranoia to his cheering cult.
at December 14, 2022 No comments:
Email ThisBlogThis!Share to TwitterShare to FacebookShare to Pinterest
Labels: 2024, 2024Election, DeSantis, DonkeyHotey, Hal Brown, Nicholas Kristof, Ron DeSantis, Trump
Older Posts Home
Subscribe to: Posts (Atom)