After 1700+ posts Daily Kos bans me for life

Saying goodby to Daily Kos where I've been banned from posting stories for life.

I reviewed Daily Kos on this website.
Please scroll down to the bottom of the page to read and make comments.
There's a big difference between advocating for violence, which should be verboten on progressive websites where readers can post, and writing about violence and your attitude about self-defense if your community is threatened by armed insurrectionists.
I've been posting on the progressive website Daily Kos (read Wikipedia page about it) for several years. I've put on more than 1700 stories. Any member of their community, i.e., those who have registered there, can post a story. Quite a few of mine had the distinction of being on the Recommended List, and in the past year this was changed to a Trending Stories list of 18 reader posted stories.
Of the last five I posted three made this list including the one I put on a few days ago. That's the one that got me banned.
If you tried to read the Daily Kos story illustrated as shown below a few hours after I posted it you'd have gotten an access denied or other similar message because it had been taken offline. There was with no explanation as to why this was done sent to me.
It turns out that I have been banned, suspended, cancelled, rendered kaput, and unceremoniously dumped there. I supposed whoever made this decision would say I burned my bridges if I ever had more than one, or my solitary bridge to the world of Kos, but from my point of view they burned the bridge for me.
I was one of the very few community members who ever posted an original opinion, idea, perspective, or thought however lame some of them may have been. I'd say that my absence is their loss. I was also the only experienced psychotherapist to regularly post essays about the psychopathology of Donald Trump.
This ban not only means that I cannot post my own stories on Daily Kos where on a few occasions as many as 2,000 readers looked at them, but I can't comment on any of the other stories there. I can still read them and see the comments other people post.
Nobody can see the story that prompted this. I tried to recreate elements of it here but unfortunately didn't copy it so I am unable to post the original.
You can help share my story by emailing the link to this blog to your friends or putting it on social media. I put if on twitter myself here.
If anyone happens to be able to post on Daily Kos wants to risk being banned themselves they can post a story along the lines of "What the hell happened to Hal Brown" and post a link to this blog page. 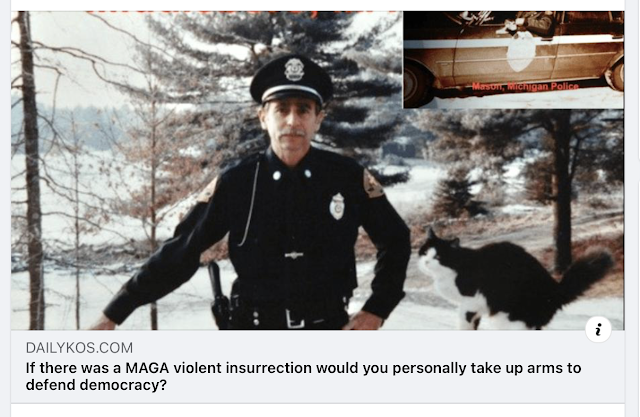 Here's the full photo of me as a reserve police officer, which I was for 20 years, both in Michigan and Massachusetts. 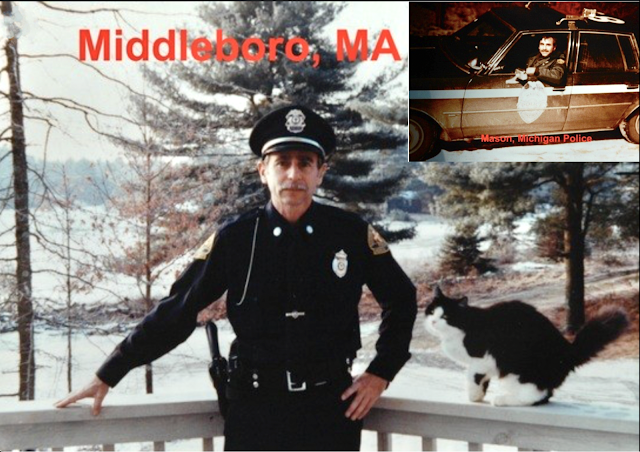 The  reason I used the police photos of me, a much younger version, was to explain my own experience with law enforcement and firearms. While never in the military I was trained to use a them as a reserve police officer. I had occasion to draw my revolver (we all used them before police departments switched to semi-automatic pistols) a few times when on foot patrol we entered dark store when we found open doors. I also drew my weapon once while in the woods look for an escaped country jail prisoner and stood by the road with a shotgun when we backed up sheriff's deputies who had stopped a carload of men on the expressway.
Here's the screen I got when I tried to look at the story:

Here's a screen grab of my profile on Daily Kos (click any image to enlarge):

Even though you can't read the story shown above you can still read any of my other stories here. I have been banned but I haven't been erased.
I am quite sure someone flagged my final story because they thought I was advocating violence which I assuredly wasn't. I expect I was banned permanently because if you are suspended temporarily you are sent a message explaining why and for how long. I'd been suspended before, each time for a week. On those occasions the stories that got me banned stayed online. Most recently it was for the last sentence in this recent story about Judge Cannon. Several years ago it was for a 2018 story about homosociality which was banned because someone erroneously thought it was homophobic: The Term "Homosocial" Describes Autocrat Admiring Misogynist-in-Chief Trump to a "T"
I don't think whoever read it grasped the nuance of my story when I was banned for posting it - Daily Kos is not big on nuance. Not only is my story offline but unfortunately I didn't copy it to post on my blog, something I generally do. Therefore nobody can look at what I wrote to judge for themselves whether in any way, shaped or form I was advocating violence.
I told the personal story of how the other day I was sitting on my girlfriend's fourth floor balcony which overlook a row of duplexes in our continuing care retirement community where we live. I live in one of the duplexes. We were talking about the potential for violence here in Portland what with the fact that groups like The Oath Keepers and Proud Boys being attracted to our liberal community where in the past they engaged in violent clashes sometimes with Antifa members.
Now of course they have escalated their threats to warn of armed violence should Trump be indicted and there are articles about what could happen if Trump is reelected as far as what is often called a new civil war.
I wrote about how her balcony offered a good spot for a snippers nest where if it came to it I could get dirt from our resident gardens and fill sandbags and buy a deer rifle at the nearby gun store. I wrote that if the leader of an armed group threatened our little mostly liberal community of elderly folks, taking out the leader as he marched down the street could make the others turn tail and run.
I suppose one could say that is advocating violence. I contend it is using violence as self-defense.
As I think of why someone at Daily Kos banned me with telling me why all I can come up with is that a reader flagged my story as break the rule against advocating violence and an administrator gave the story a cursory reading and decided to ban me without telling me they were doing so, and to remove the story entirely, judging that I was advocating violence.
It should be a no-brainer that I was writing about self-defense, albeit from a rather dramatized and I wouldn't argue if someone might say it conveyed a macho viewpoint although friends would tell you I come across as anything but macho.
Before it was taken offline it moved to about No. 12 of 18 stories on the Trending List, thus showing that lots of readers were interested in it. 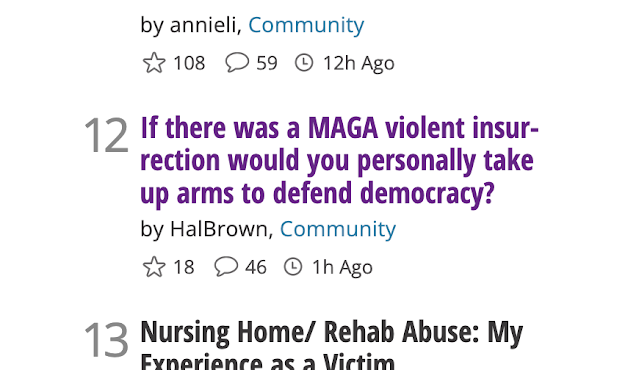 The are numerous stories posted on Kos and very few make this trending list. Three of my last five including this made the list. The story before it got removed had something like 50 recommendations, and over 80 comments with few exceptions agreeing with what I wrote.
About 450 people took the poll (which indicates about how many people read it) with about 90% saying that if it came to defending democracy against an armed insurrection they personally would seriously consider fighting back with their own firearms.
These numbers are very high considering it had only been online for several hours.
I doubt I will ever be able to post political opinions on Daily Kos but will continue to post them on my blog. I hope those of you who liked what I wrote on Daily Kos will read what I post on my blog.
I am not up to trying to recreate the story at this time. Instead, below are the images I used and which are related to the story which related my thinking of an imaginary situation where the retirement community where I live was attacked by armed insurrectionists and I was on a balcony where I could use a sniper rifle to slow them down or make them turn tail and run. It was pure fantasy and by no means was I advocating violence.

I referenced how Portland became a magnet for groups like Proud Boys and Oath Keepers and that I lived in the closest retirement community to the end of one of the light rail stations from downtown Portland.

Each of the following photos fit into the narrative of my story. The gun shop website is for a store a few blocks from where I live. 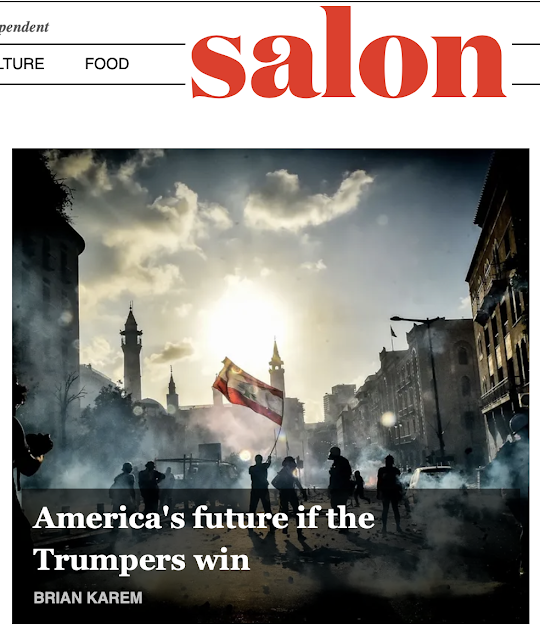 Link to above Salon article. 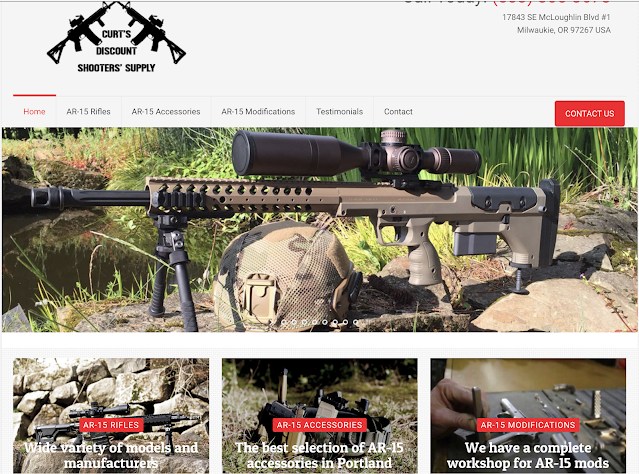 Above is website screen grab for gun store, one of two which are less than a mile from where I live. 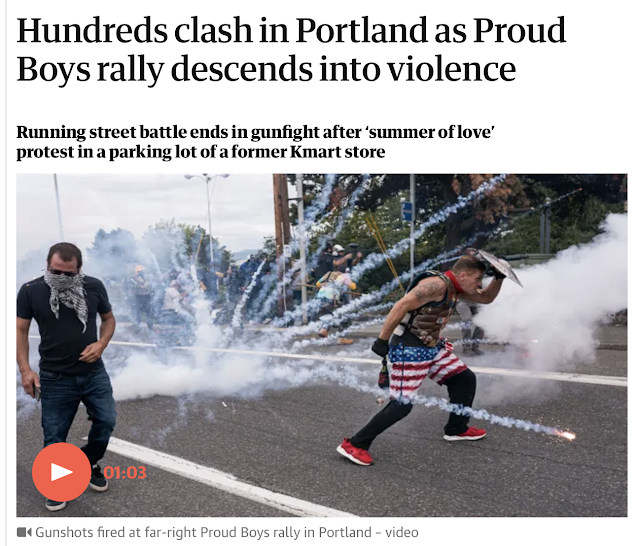 This is the link for the above article. 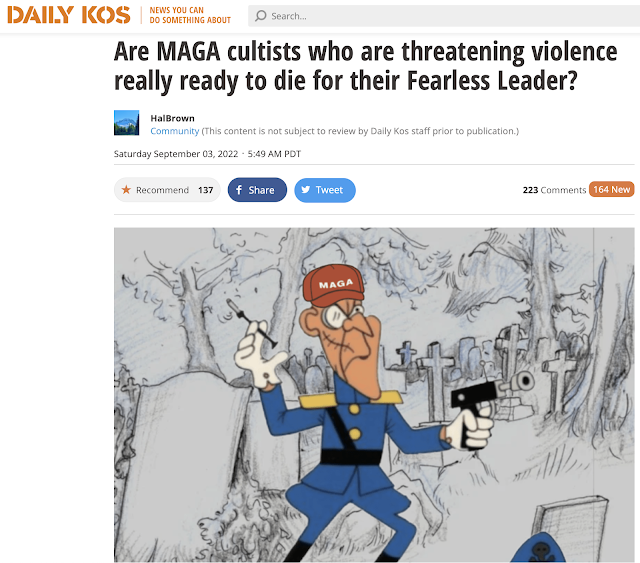 Link to above story 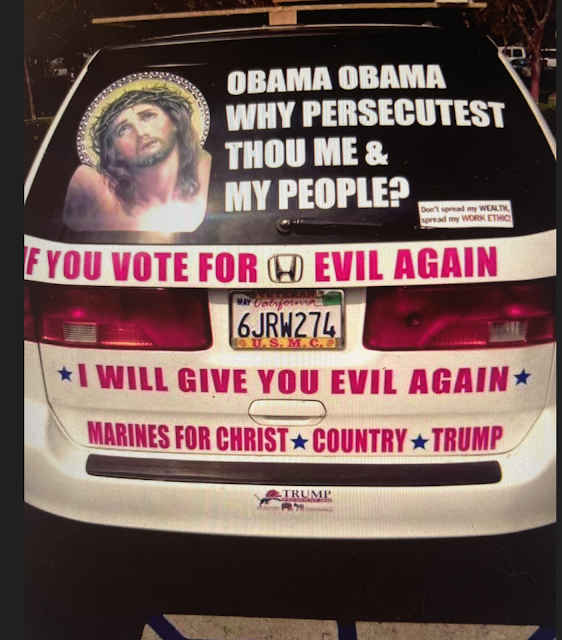 Photo I took of a car in front of me. 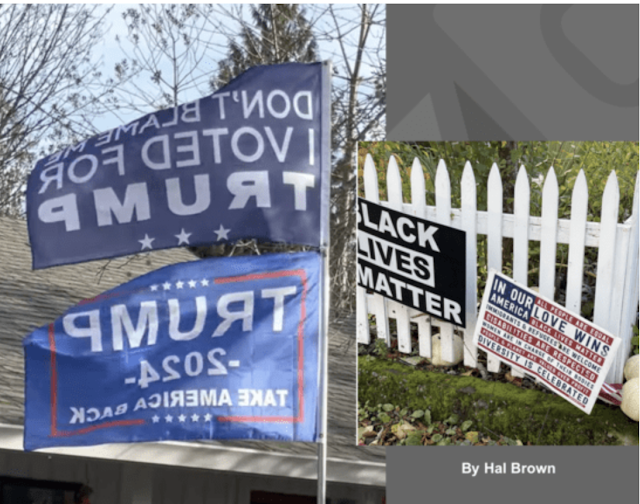 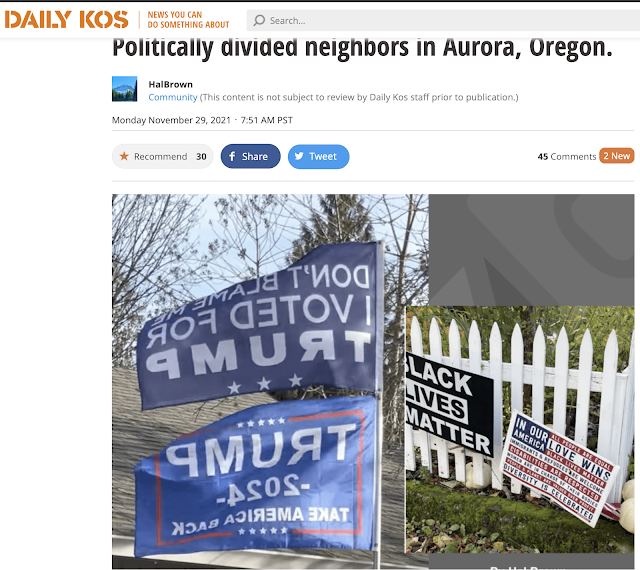 Link to above story/ 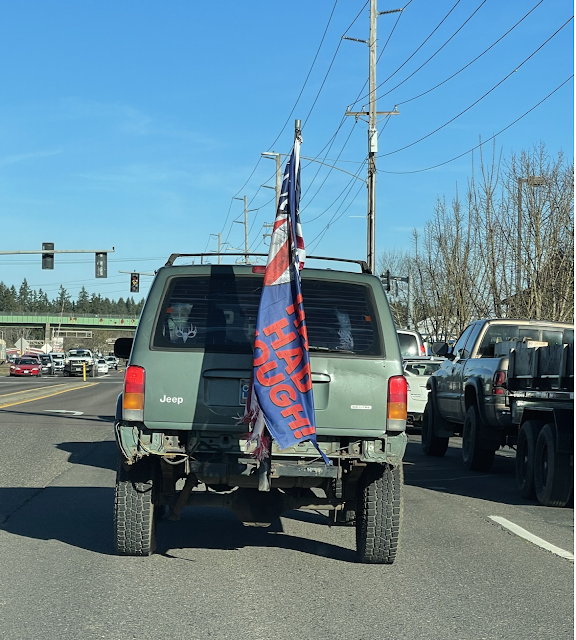 Another Trump vehicle in front of me. 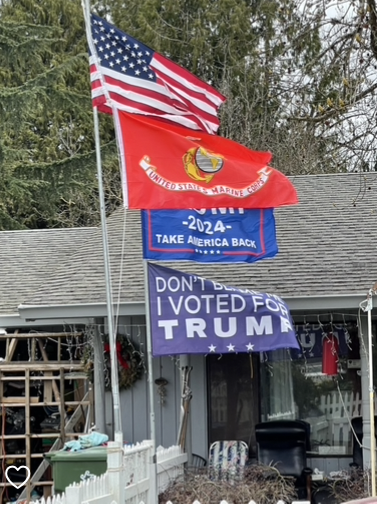 Below are photos I took of the cars in front of the Trump flag man's house. 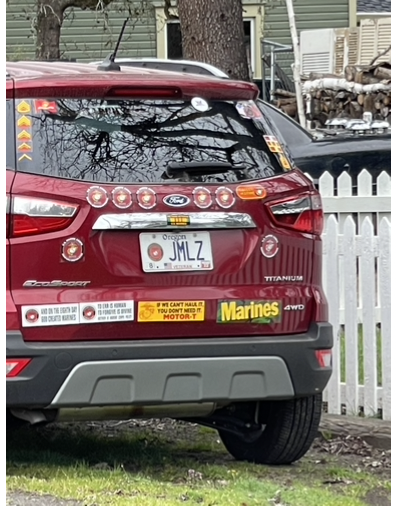 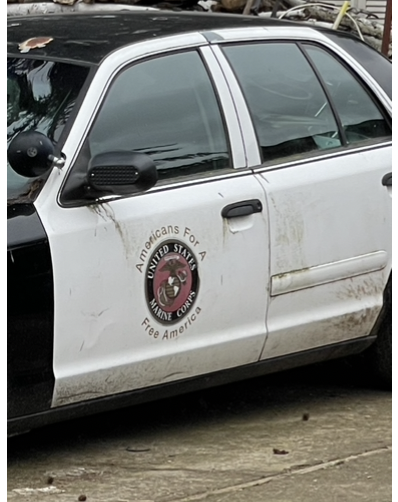 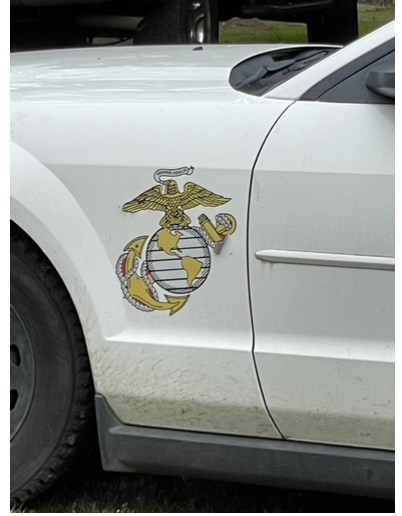 If anyone has their own website and wants to republish anything I posted on Daily Kos let me know and I am sure in most instances I will give you permission to do so.
Most recent blog readership by country. 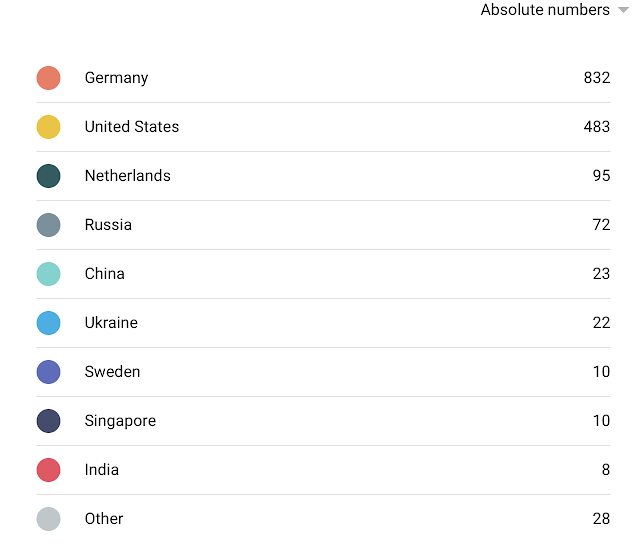 Posted by Hal Brown at 5:33:00 PM
Email ThisBlogThis!Share to TwitterShare to FacebookShare to Pinterest

Thanks for the info. I wondered what happened. I enjoyed reading your diaries on DKos and I hope you continue to write here.

Thank you. I hope more people avail themselves of this comment feature.

People are definitely reading or at least looking. I noticed a spike in web traffic over the last couple days but I can’t remember where I saw the chart.

There was a spike probably because I posted links on my won and another Facebook page and on Twitter. The counter is in the upper right of the website.