About my career and about the Mason Mental Health Center ||||| My 1400+ Daily Kos political stories are here || Open just this page || Back editions (archive) in right column. 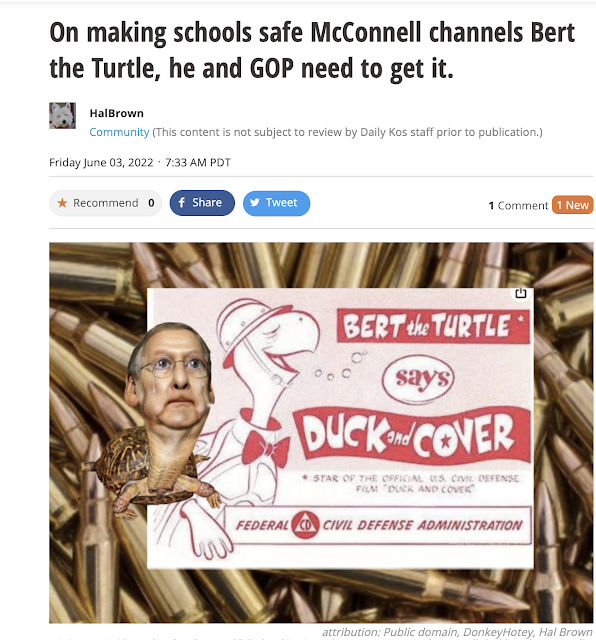 For those of you too young to have experienced the actual duck and cover drills during the 1950’s which I remember well, or haven’t read about them, here’s a bit of history:

“Duck and Cover” – Futile Measures, or a Life-Saving Plan?

Here’s the nine minute video those of us in school at the time were shown in our assemblies:

During the Cold War period we were all afraid of a nuclear attack. I lived in a New York City suburb and remember thinking that drains my bedroom shades at night might protect me if the Russian bombed the city.

I won't show the photos in this diary of children hiding under desks because they are really too upsetting for some people to look at. You can see one example here. Not to state the obvious, but hiding under a desk if there’s a shooter armed with an assault rifle in a school would be about as effective in saving lives as it would be is there was a nuclear attack.

To extend the analogy, McConnell and the GOP solutions to mass shootings which don't address access to assault guns would be similar to saying that the way to have resolved the world coming to the brink of nuclear war was to have everyone have quick access to a bomb shelter instead of working on a nuclear disarmament treaty. Considering the mindset of Republicans I suppose the likes of Marjorie peach tree Greene and Lorena Boebert might argue that it was mutual assured destruction that saved the world so this would justify having teachers wear body armor and carry AR-15’s.

Of course McConnell blamed a "maniac" for Texas killings, doesn’t address possible solutions to recurring mass shootings that might actually be effective and in his three minute Senate speech didn’t even mention guns.

McConnell has several nicknames and just earned himself a new one:

The backstory: In the aftermath of two mass shootings in Texas and Ohio in August 2019, the hashtag #MassacreMitch trended on Twitter.

The nickname came from critics who placed much of the blame for the shootings, which claimed 22 lives in El Paso, Texas, and nine more in Dayton, Ohio, at the feet of McConnell, who has blocked gun control legislation in the past.

How McConnell reacted: Following the El Paso shooting, McConnell wrote in a tweet on Aug. 3 that the the "entire nation is horrified" by the "senseless violence." A few days later, McConnell said in a statement that Senate Republicans were ready to "engage in bipartisan discussions of potential solutions to help protect our communities without infringing on Americans’ constitutional rights."

McConnell did not directly comment on the "Massacre Mitch" nickname. 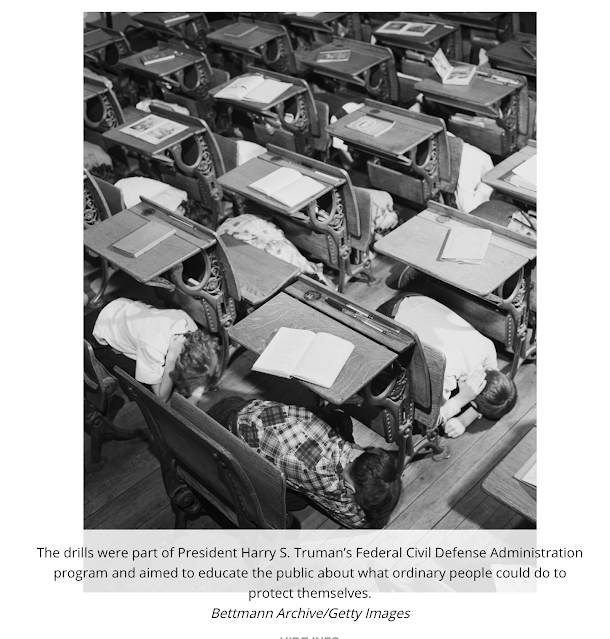 at June 03, 2022 No comments:
Email ThisBlogThis!Share to TwitterShare to FacebookShare to Pinterest

Updated: About my career and about the Mason Mental Health Center ||||| My 1400+ Daily Kos political stories are here || Open just this page || Back editions (archive) in right column. 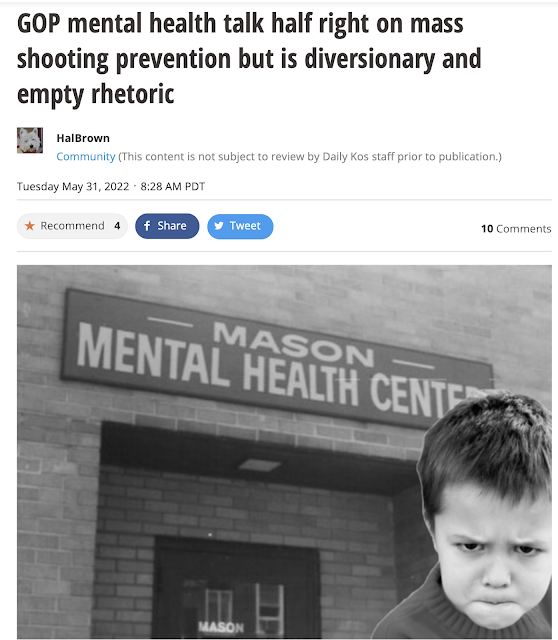 As you’ve probably heard, Gov. Greg Abbott said the following: "We as a state, we as a society need to do a better job with mental health. Anybody who shoots somebody else has a mental health challenge. Period. We as a government need to find a way to target that mental health challenge and to do something about it." Texas ranks as the worst state in providing mental health services. (ABC News). Abbott just serves as an example which is typical of Republican governors when it comes to how they spend their states money. For example (from The Washington Post):  “In April, Abbott transferred $211 million away from the state’s Health and Human Services Commission, which oversees mental health programs, as NBC News has noted. The money was transferred to support Operation Lone Star, the governor’s controversial deployment of National Guard and law enforcement resources to the border.”

All the sensible actions actually addressing guns should be taken. For example: make the AR-15 type assault rifles and high capacity magazines illegal, mandate background checks for all firearms sales, not allow people judged to be dangerous to buy any guns, and stop sales to anyone under 21. Even if such action were taken tomorrow, and others like assault weapon buyback programs, the results would take a long time to show an effect.

The Republican proposal of what they call “hardening schools” is just a symbolic gesture that would have only one benefit: it would give children a sense of security. It would not stop resourceful potential school and other mass shooters who could still decide to thwart security measures inside of schools or make their attacks elsewhere.

The substantial increase in mental health services both in the community and counseling in the schools would have an almost immediate impact.

Although parents may see signs of developing violent tendencies in their children they are sometimes in denial. When they do see this they should have resources readily available to them. Teachers are often the first people who see signs in a child that could be indicative of a mental health condition that could lead to violent acting out.

Regardless of whether anyone sees more obvious signs of violent behavior such as bullying, or precursors to violence such as being bullied, developing, school based services for other behaviors which should be assessed such as being withdrawn, anxious, or easily distracted should be also referred to the counseling department. Sometimes the squeakiest wheel gets the grease, but this shouldn’t lead to others in need being underserved.

Based on my own experience as the director of community mental health programs I’ve concluded that at a minimum community mental health program and school counseling programs ought to have close relationships and ideally liaison people who meet together on a frequent basis and whenever there’s a problem. Ideally every community should have a program like Clinton County, Michigan had when the heads of all agencies serving children met together to work on addressing issues related to children. This was called the CAN Council (for Child and Neglect). The members were the mental health center director, the director of Protective Services, the chief assistant prosecutor for the county, the Friend of the Court, the head of the school counseling  department, the chief county detective, and the juvenile court director. This cost nothing but an hour of each agency’s time but was crucial in assuring excellent services to at risk children and families.