Elon Musk put a Tesla in space, now he wants to end a war, and other stories

Elon Musk put a Tesla in space, now he wants to end a war, and other stories 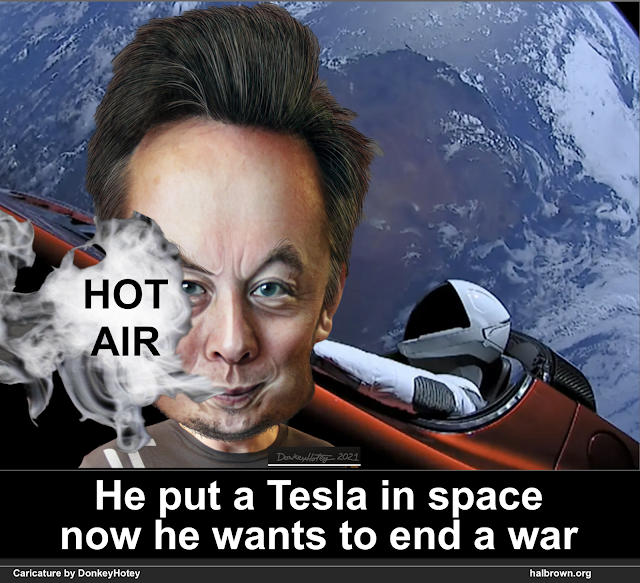 You've probably been keeping up with this story: 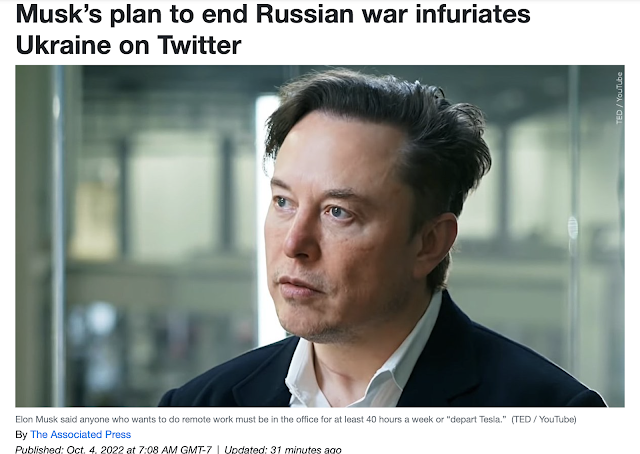 I don't have any particular insights into his motivations for advocating for this plan in a series of tweets (here). 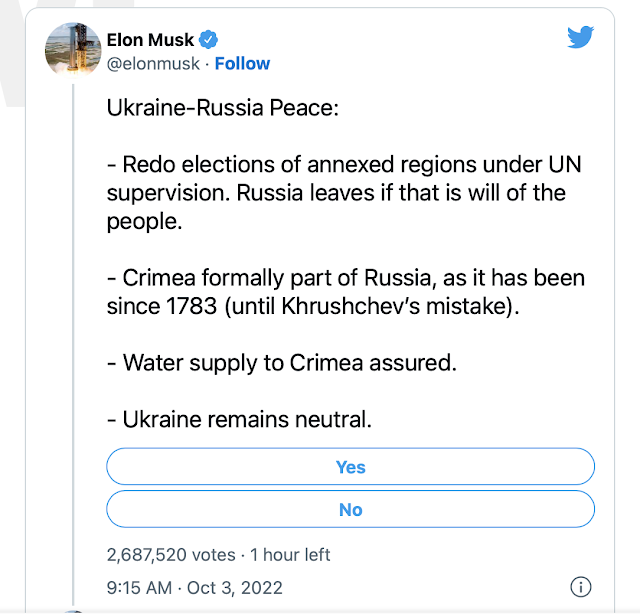 Here are a few replies to the tweets (click to enlarge image): 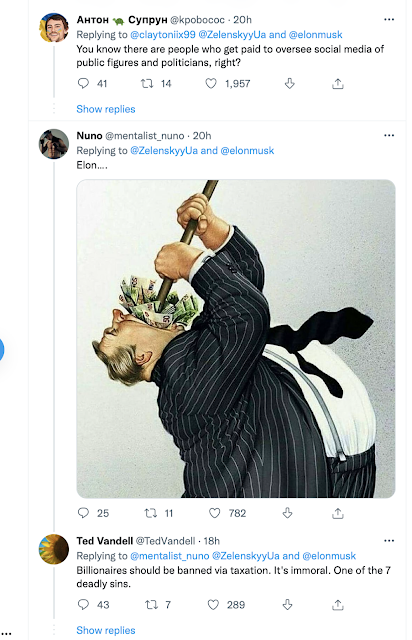 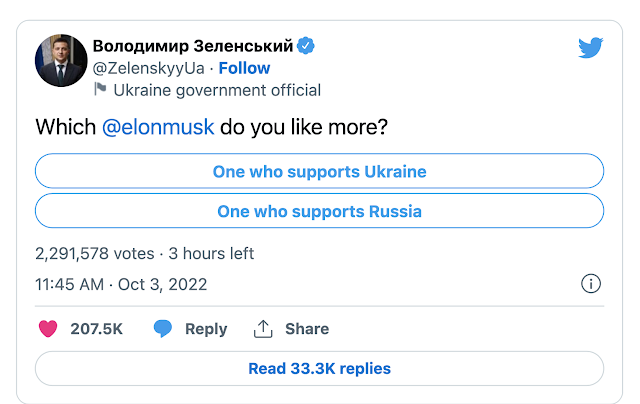 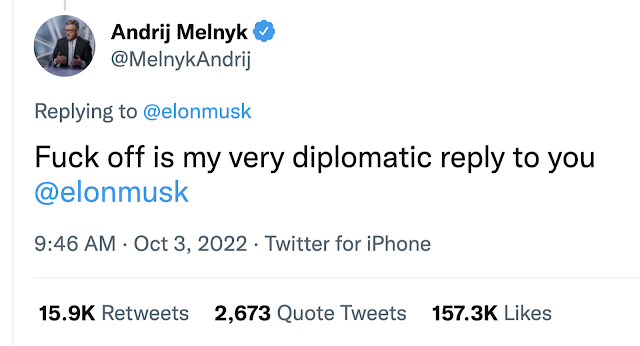 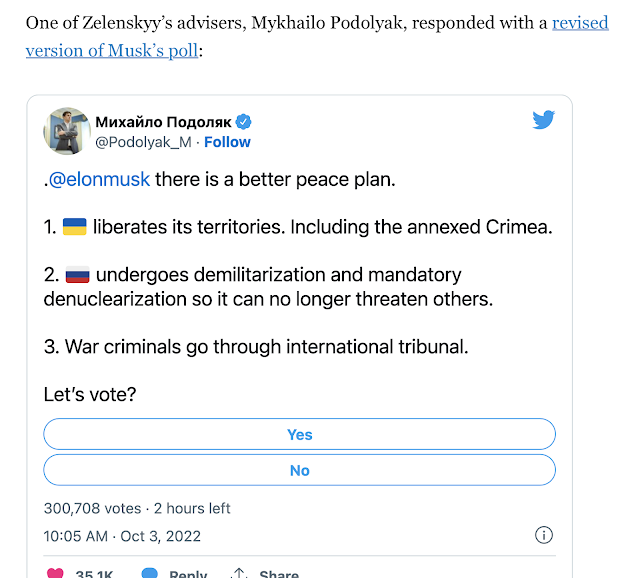 I don't think it's an outlandish assumption to think Musk believes that being the world's richest person he may have the world's biggest brain (we've heard that before).
Why not, then, shouldn't he be able to come up with an idea that will end the war of Russian aggression in Ukraine?
No dummy,

and the winner of the Nobel Prize in Chemistry  had no background in medicine or medical research.
I suppose in a world where on one extreme we have a former game show host and rule breaking real estate developer becoming a mentally imbalanced woefully uniformed president and on the other extreme we have a comedian becoming a heroic  president of another country everyone's idea should be judged on their merits.
Other news of the day
This story is also related to Ukraine though in a very different way:

The Conservative Political Action Conference parroted pro-Kremlin propaganda about Ukraine in a since-deleted tweet, fitting a disturbing pattern in the GOP. 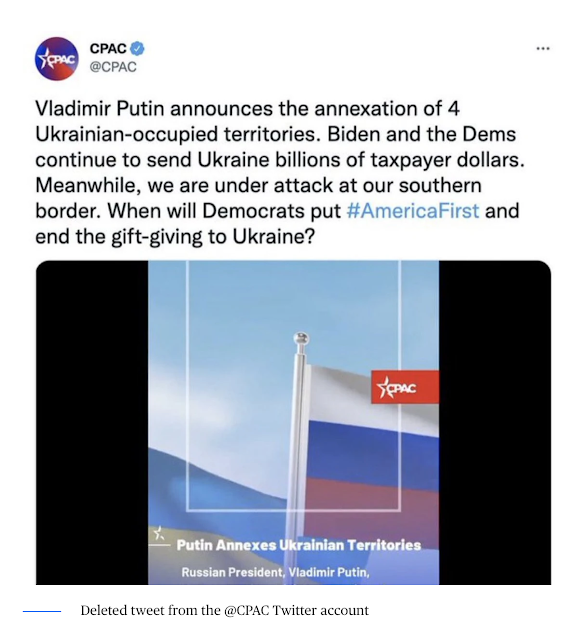 Below: Let's hope dog lovers in Pennsylvania not supporting Walker, where some people may still decide to shoot their dogs when they are unable to hunt anymore, decide that they can't vote for someone who tortures dogs and other animals. They may be able to say let bygones be bygones for paying for his girlfriends abortions or not be bothered by reports that he was a wife beater but hopefully they draw the line at cruelty to animals.
While on the subject of totally unqualified Senate candidates, how about the breaking news about Hershel Walker denying he ever paid for a girlfriend's about claiming this is a total lie? As you may have read in his book he revealed he suffered from multiple personality disorder:

He may be telling the truth as he knows it, or more specifically as he remembers it. In my 40 year career as a psychotherapist I treated five clients with this disorder, currently called dissociative identity disorder. A hallmark of this disorder is that among the various personalities, called alters, there are various kinds of amnesia. In many if not most cases certain personalities can take over with other personalities not having and awareness of what they are doing.
A true cure for this disorder come about when all the identities or alters are integrated into one and there are no amnesiac experiences when one personality is in control and the others aren't and in fact are totally unaware of what is happening.
Walker claims he's been cured but there's no way to prove this. It is an exceeding difficult disorder to treat let alone achieve cure. In my experience the best a therapist can do is try to keep the self-destructive or dangerous personalities from acting on their impulses or desires.
It is quite possible that the personality or personalities that arranged for and funded the abortion blocked the memory from the other personalities. Unless all the personalities are now integrated along with all of their memories, there is a chance Walker is telling the truth as he knows it about the abortion.

RawStory paraphrases profanity in this title of this story: 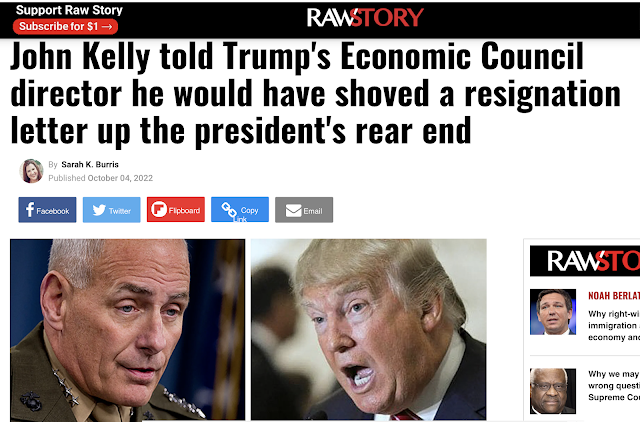 Trump, who plainly did not want to lose his top economic adviser, told Cohn he should feel free to publicly voice his disagreement, and encouraged him to go to the briefing-room podium and say whatever he needed to."
"You’ll do the right thing," Haberman writes that Vice President Mike Pence said, while putting an arm around Cohn like some kind of mafia movie.

"Cohn said he would complete his efforts to pass a tax bill, which had been his passion throughout the year, and not stay much longer," the book continues. "'But you should assume I’m done,' Cohn said. He still had his resignation letter in hand, undelivered and unaccepted. As Cohn left the Oval Office, Kelly whispered to him, 'If I were you I’d have shoved that paper up his f*cking ass.'"

Another excuse to make an illustration: 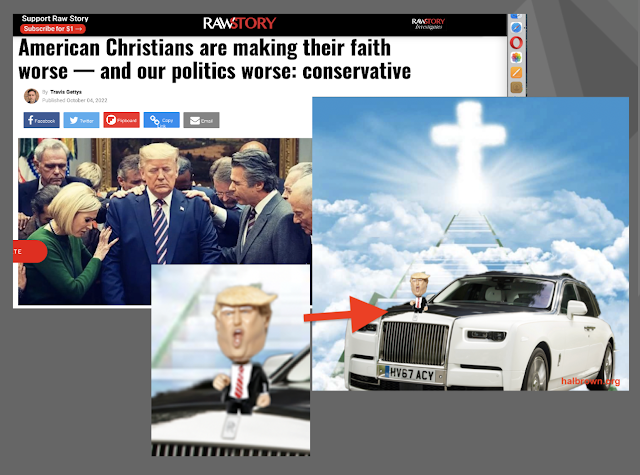 "Increasingly core to a lot of people in the Christian faith, and particularly in the white evangelical world, is politics and culture," Wehner said, "and in a sense, faith is engrafted. It’s a secondary issue. A friend of mine uses the term 'hood ornament — that faith becomes a hood ornament: It validates these pre-existing attitudes and ideologies. But the way it’s being done is that people are unaware of it, because they’re going through and, in my experience and in my observations, is they’re proof-texting their preordained political, cultural, sociological beliefs, and then saying this is what the Bible says."

Totally out of left-field...
... because Portland is my adopted hometown I thought I'd share a lesson learned by some crooked strip club owners here. You may know that Portland is known for it's many strip clubs, some of which vie for the title of the quirkiest: 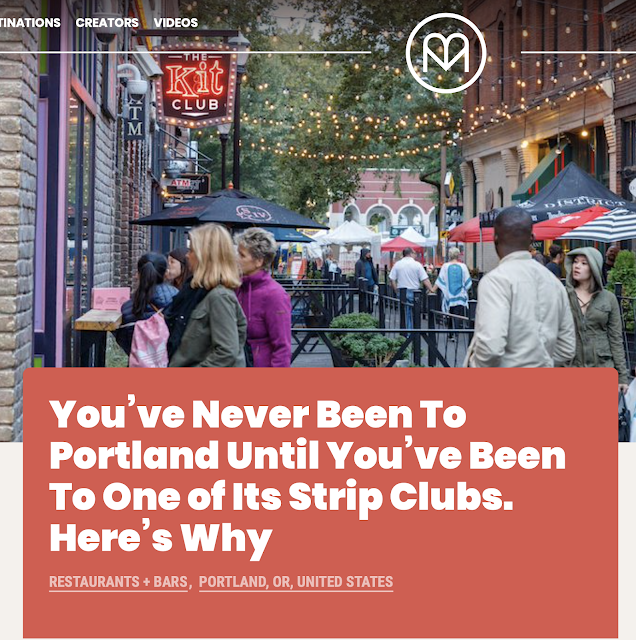 I suspect that these businesses take in a lot of cash, not only because patrons stuff greenbacks into the performers g-strings, but because men don't like to pay using credit cards for obvious reasons. Since I've never been to one I can't say I observed this in person.
Here's the local story about how trying to avoid paying taxes on cash can come with serious consequences: