My illustration added this image to one of Jim Jordan which I modified from a color photo.: 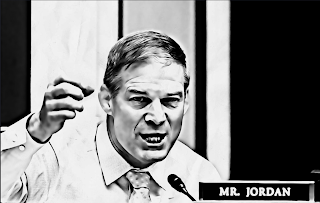 DOJ signals to Jim Jordan that it won’t share information about pending investigations from The Hill, but it could be on any of the various stories about this announcement from the Justice Department.

I have no doubt that the bloodthirsty Jim Jordan is salivating at the prospect of pouncing wolf-like onto his Democratic Party victims and devouring them with his incisive incisors.
This DOJ announcement is more than a "not so fast buddy boy." The Department of Justice is telling him in no uncertain terms what the J in DOJ stands for. They are telling him that he is not the king of the hill (and The Hill) that he fancies himself.
My understanding is that the DOJ may comply if asked, or subpoenaed, to provide information about other matters besides ongoing investigations, in other words, about concluded investigations. The fly in in ointment for Jordan is this from The Hill:

Assistant Attorney General Carlos Uriarte said in the letter, obtained by Politico on Friday. “Longstanding Department policy prevents us from confirming or denying the existence of pending investigations in response to congressional requests or providing non-public information about our investigations.”

If I am interpreting this correctly, all the DOJ has to do is refuse to provide information without explaining why they are doing so.
If or when the DOJ provides information I think Jordan will find that he is on a snipe hunt, literally a fool's or jester's errand. They will bluster and bloviate about all the damning evidence of malfeasance they'd uncovered, but like with Benghazi time will show that there was no there .
The same goes for attempts by the Oversight Committee looking into the so-called weaponization of the DOJ,    as they spin their wheels investigating the U.S. withdrawal from Afghanistan, Dr. Anthony Fauci, the origins of Covid, Big Tech, oh, and the biggest nothing-burger, Hunter Biden.
No - there - there... not here, not here, not here, not there, not there, not there, sorry dudes and dudettes, not anywhere.
Jim Jordan, the former wrestling champion in the 134 lb. weight class,  and OSU wrestling coach accused of covering up sexual abuse at the college (something that earned him the nickname of Gym Jordan) likes to fleck his muscles.
Like the typical winning wrestler on the mat, Jordan is very aggressive. I had a couple of friends in high school who wrestled. One of them went on to be a college wrestler. He handily pinned me in about a minute in an intramural wrestling competition. I can attest to the fact that although very aggressive when in a match, they were mild mannered everywhere else.
Not so with Jim Jordan. Not only is he aggressive but obnoxiously so. If he was the least bit likable we might have cause to be a tiny bit worried. The same goes for just about every prominent House Republican. For example, likable in the same sentence with Marjorie Taylor Greene, Lauren Boebert, Matt Gaetz, Paul Gosar, and others, is the very definition of an oxymoron.
Update: On MSNBC commentary, an observation that if DOJ refuses to give some information the House committee can take it to court, but these cases can take months or even years to resolve. 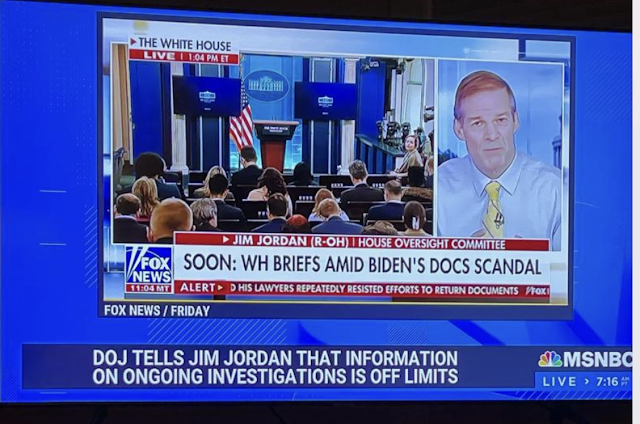 Republican never-Trumper Stewart Stevens just noted what I did mentioning Marjorie Taylor Greene and (I think) Paul Gosar saying that they aren't even likable people and who would want to be sitting next to them. 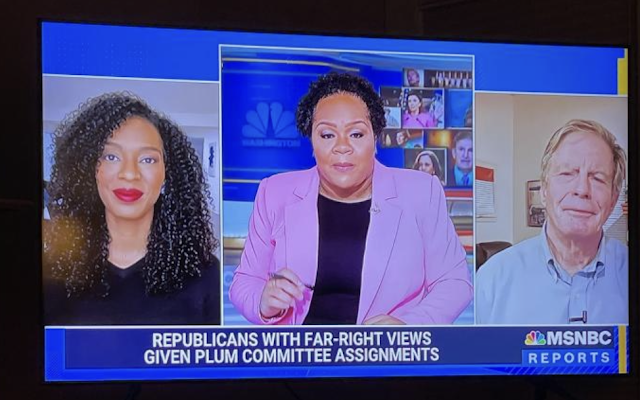