Ron DeSanctimonious may be Trump's best insult yet

Ron DeSanctimonious may be Trump's best insult yet
By Hal Brown Trump is known for coining insults to use to against his enemies. He often tries them out at his rallies to gauge audience response. Most of them are juvenile, although the mental midgets at his rallies will cheer anything. He may have applause meters to see which one's are the best.
Only kidding. He'd doesn't need an electronic gadget to discern which insulting appellations elicit the loudest and most energetic cheers and of course boos from his audience. For Trump, the louder the better.
Today Trump referred to Ron DeSantis as Ron Desantimonious as he has been doing for several months. This got me to thinking that to give begrudging credit where it is due, this a damn good insult.
This is from 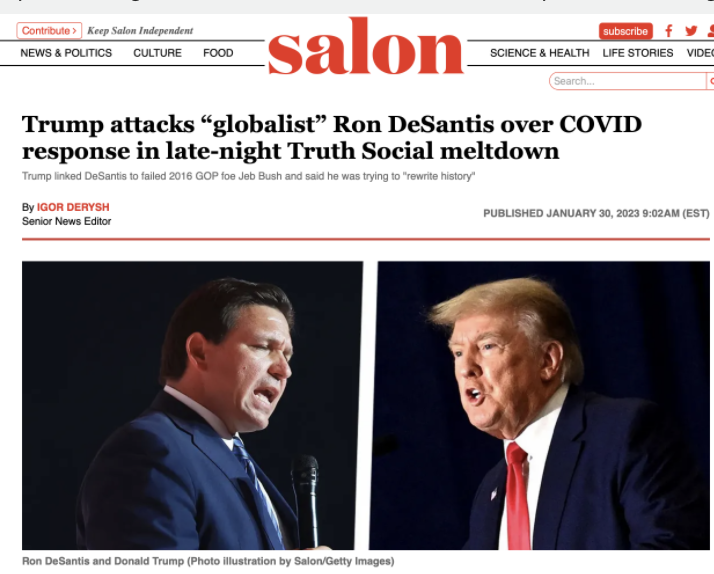 EXCERPT: Trump lashed out at the group and DeSantis in a Truth Social post shortly before 1 am on Monday.

"The Club for No Growth is a GLOBALIST group that I have been taking to the cleaners for years," Trump wrote, adding that "Ron DeSanctimonious, who I made Governor in BOTH the Primary & the General, is also a Globalist, & so are his donors."

"Jeb 'Low Energy' Bush was next to him last week," Trump wrote, referring to his old 2016 GOP primary foe. "Check PAST!" 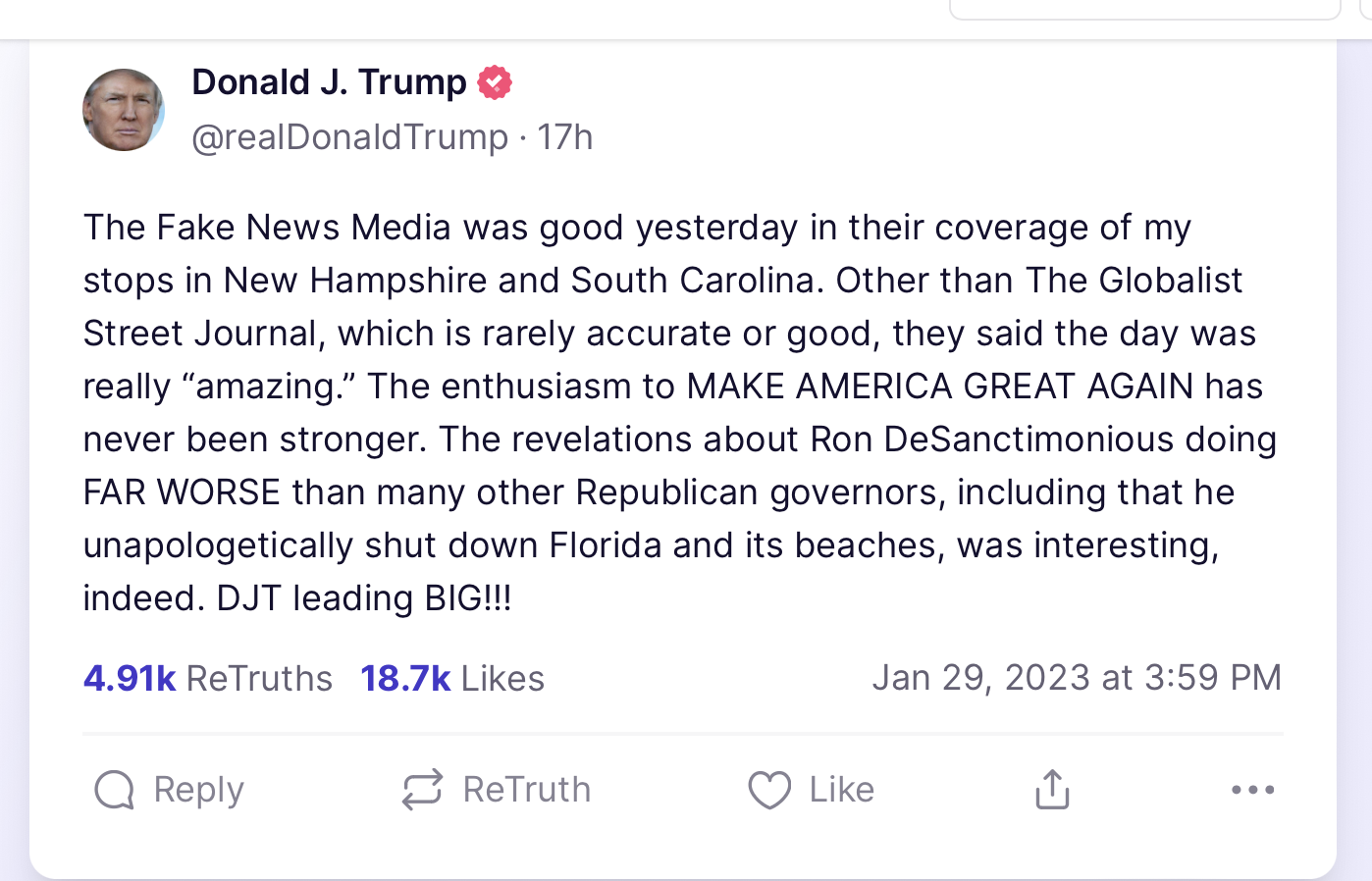 The name he is called Ron DeSantis may be his best yet. True, Trump throwing the term "globalist" in there is a distraction since most of his cult members don't know it means a person who advocates the interpretation or planning of economic and foreign policy in relation to events and developments throughout the world. They do know it's "bad" and believe it's anti-American.
Trump posted this on Truth Social

The Club For No Growth is a GLOBALIST group that I have been taking to the cleaners for years. We worked together for a period, but they couldn’t get away from China, Europe, Asia, and part’s unknown. They know I won’t play that game, I am America First all the way. That’s the ONLY way we will MAKE AMERICA GREAT AGAIN. Ron DeSanctimonious, who I made Governor in BOTH the Primary & the General, is also a Globalist, & so are his donors. Jeb “Low Energy” Bush was next to him last week. Check PAST!

Trump  writes "I am America First all the way." He could have come up with a new insult with the opposite of Make America First, that is Make America Last, and called these enemies "make America lasters" - I sure hope he never uses that since I don't want to think I may have provided him with an effective insult.
Back to the insult of the day:
This is from a web search of the name Ron Desantimonious: 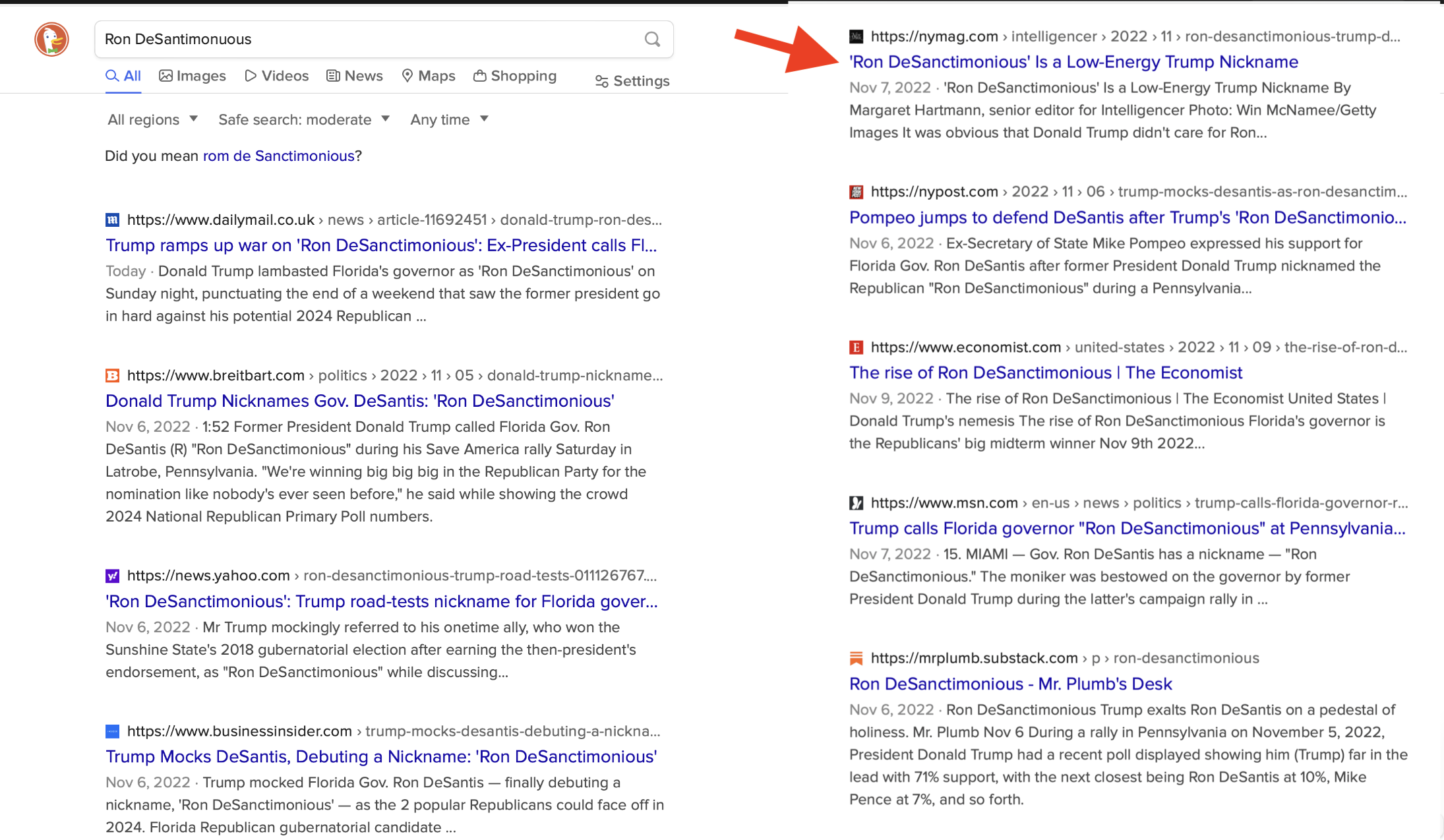 There were mixed reviews for this name, for example (red arrow) NY Magazine called it low energy. This being said, his merely trying out this nickname got himself a lot of publicity.
For example Fox News:

I think this is actually one of, if not his more effective insulting nicknames for someone he thinks is an enemy. While not a word many, if most, of Trump's screamers and booers could define exactly, i.e., someone who makes a show of being morally superior to other people, they could tell you that it means someone who was obnoxious and acts superior.
Trump acts like he has the biggest brain and is superior to everyone but members of his cult believe he has every right to do so because all this is true. They never find him obnoxious.

What counts here is that, first, it is a "big word" showing how smart Trump is for using it, and equally important, it fits well enough with Ron DeSantis to make it resonate. It's almost but not quite a rhyme.

The website The Focus took a deep dive into Trump's using this nickname.

As soon as Donald Trump uttered the two words “Ron DeSanctimonious,” the nickname took over Twitter. In fact, on October 25, a Twitter user speculated over what nickname Trump would give Ron DeSantis, receiving more than 1,000 likes and hundreds of responses in the comments. 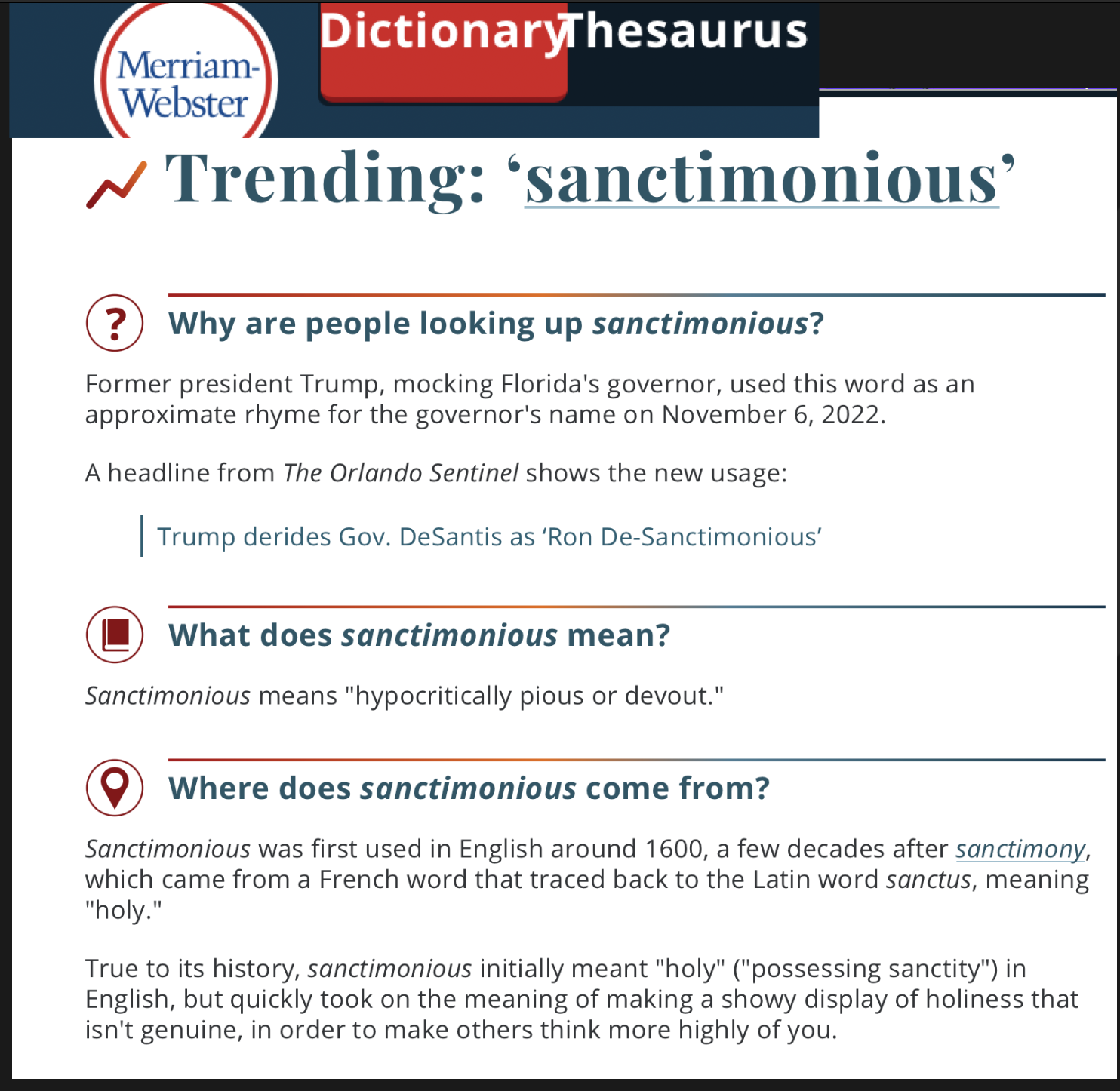 I wouldn't be surprised if Trump is the only person to have a Wikipedia page devoted just to the nicknames he has used to insult and describe people.
In scanning the list the only one that I think comes close to Ron Desantimonious is Sleepy Joe. While it is hardly clever it does play to his base effectively as depicting President Biden as someone persistently dozing off because he's too old and lacking in the energy needed to be president as opposed to Trump, the young and vital energetic macho-man he likes to portray himself as. At present DeSantis is Trump's biggest rival for the nomination. Should he run against Biden I think he'll have to do better than "Sleepy Joe" to insult him. I have a few ideas but I am not about to share them.
Trump used the word "little" (or "Liddle' " for Adam Schiff) 23 times as insults. These include Little Marco and Little Rocket Man (for Kim Jon Un). The later is probably the best of his "little" insults since it is used with "rocket man." Otherwise he's just making fun of someone's height. Of course he never called the 5' 7" Putin Little Vlad.
Below, read more with links to articles about Trump calling DeSantis Ron DeSantimonius:

At a rally Saturday Pennsylvania rally Trump had polling numbers on a big screen and said:

I assume Mike Pence doesn't even warrant a nickname... when he does we'll know Trump feels threatened by him.

This set off some criticism from conservatives, for example from Matt Walsh (profile): 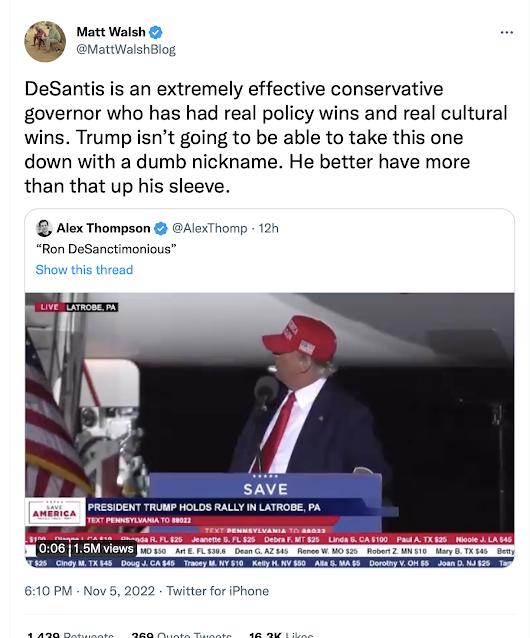 I wonder if Trump made this up himself or someone made it up for him.
In fact, it wouldn't surprise me if he couldn't even define the word. He used to say his favorite books were the Bible and The Art of the Deal.

It's a common question every presidential candidate is asked: What are your favorite books? It's more than just a curiosity about a candidate's personality; the answers tend to shed light on a would-be president's interests and intellect.With this in mind, I was fascinated to see Donald Trump's answer to this question yesterday.

It's one of the most Trump-like answers Trump has delivered all year. Asked to name his favorite book, the Republican candidate used to say the Bible. Now, he's dropped the pretense: Trump's favorite books are the ones that have his face and name on the cover. Because for Donald J. Trump, everything is always about Donald J. Trump.In the same interview, he added, "I love books. I love reading when I get a chance to."Whether or not one believes this is a matter of perspective. I, for example, find it difficult to see Trump as a voracious reader. Several months ago, asked to name the last book he read, the Republican candidate said, "I read passages, I read areas, chapters, I don't have the time."But even for those inclined to accept Trump's claims at face value should pause to appreciate the narcissism that goes into a perspective like this. MSNBC

The dictionary wasn't on the list. Well, duh, I wonder if he ever owned one, even before the Internet when students all had a copy he probably paid other students to do his work for him.
To be fair, saying the dictionary is one of your favorite books when asked doesn't come to the mind of many well-read people because they consider it a given.
Even if he could define sanctimonious,  I don't want to be snobbish but I  have my doubts many or most of his MAGA crowd would know it was an insult but couldn't define it.
Oddly, Trump himself isn't sanctimonious in the sense that he believes he is morally superior to other people. Morality doesn't matter to him. Could he even define it? Ask yourself....
They are pesky impediments to getting what he wants. I think he considers morality a "woke" Democratic Party concept. He simply believes he is superior to everyone in all the ways that count.
I think Ron the Con might have had more of a ring to it and people would understand what it meant, though when it comes being a con-artist Trump has no peer. His MAGA cult likes the fact that Trump is a con, they see it as a good thing because they don't grasp that it is them that he has conned.