One person train wrecks and a huge traffic pileup

Is it any coincidence that all of the people who have become one person train wrecks and the large group that has become a huge highway traffic pileup are Republicans? I can't think of a Democrat but would be happy if readers can find one to add to my list.

In a quick glance at RawStory this morning I saw these articles: 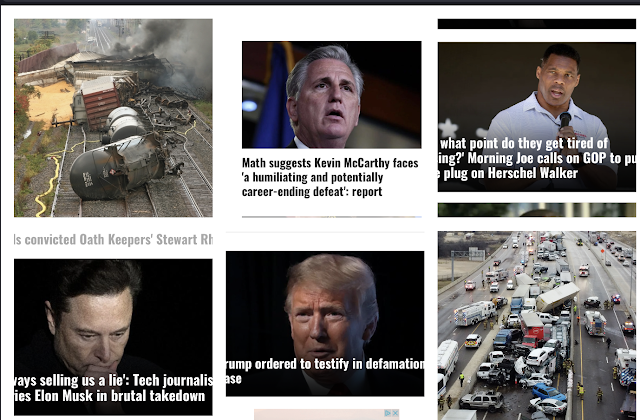 The first one is about the coming battle in the House for who will be Speaker. I consider this just the beginning of what will be a huge traffic pileup for the House GOP as they begin their investigations into Hunter Biden, who everyone has heard of but few care about, to Alejandro Mayorkas who nobody has heard of but will once the hearings start.  Their eventual goal may be to try to impeach President Biden, an effort that might be successful in the Republican controlled House but will go nowhere in the Senate.
What it all adds up to is a gridlocked (to use another traffic term) legislative agenda in the House which you better believe Democrats will publicize to their advantage when popular bills go down to defeat.
The individuals who have the most ginormous train wrecks Donald Trump and Elon Musk who are the most publicized. The lack of judgment and self-defeating grandiose narcissism of these two is
If Herschel Walker loses he will be added to the list. Hell, if he wins, covering his putting his foot in his mouth as a Senator will prove irresistible to media.
Other train wrecks who make the news who come to mind are Kari Lake (read story) and Ye (who is apparently going to run for president with

Nick Fuentes and Milo Yiannopoulos helping in his campaign ).

I predict that there will be many opportunities for the likes of Jim Jordan (read yesterday's blog story about the soon to be chair of the GOP Judiciary Committee) and other House Republicans, especially those in the Freedom Caucus who crave attention like Marjorie Taylor Greene, Lauren Boebert, and Matt Goetz, to vie for the dubious distinction of becoming headline grabbing train wreck of the day or week.
The reason some of the individuals who will crash and burn will be due to calculated attempts to gain notoriety and to stand out in a crowded field. Keep my highway metaphor, compare it to someone driving 100 MPH in attempt to beat everyone else to a destination.
Most of them also just happen to meet the many of the clinical criteria for having a narcissistic personality disorder.  This is from The Mayo Clinic:

Symptoms of narcissistic personality disorder and how severe they are can vary. People with the disorder can:

At the same time, people with narcissistic personality disorder have trouble handling anything they view as criticism. They can: