There is no longer a "We the People of United States" 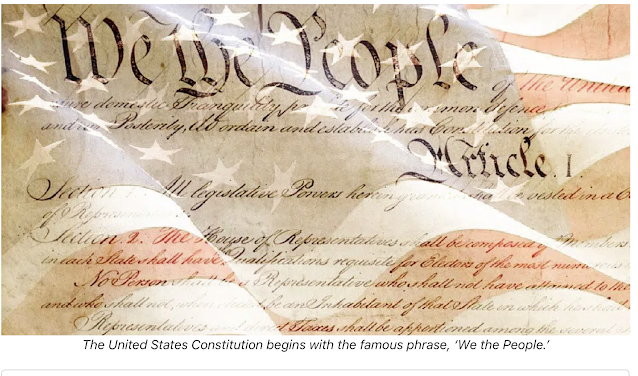 The morning after Halloween I envisioned zombies dancing when I read title of this column this morning:

America must step out of this self-destructive zombie dance 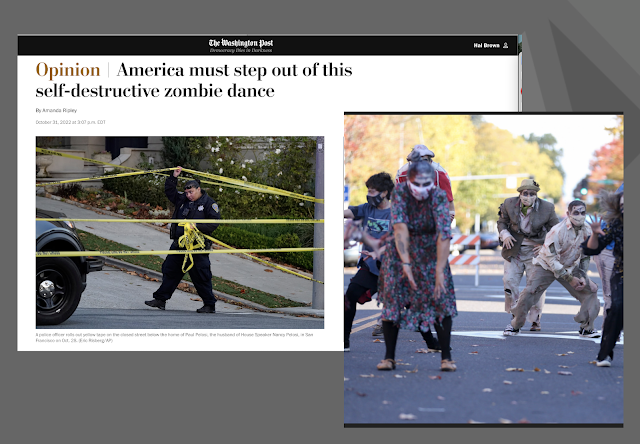 The title of the column by Amanda Ripley (the author of “High Conflict: Why We Get Trapped — and How We Get Out”) suggests she is going to give us an answer.
Here are a few excerpts:

High conflict — the kind that is self-destructive and stubbornly resistant to resolution — is not mysterious. And we have much more wisdom about how to respond to it than we think.
The only good option is to do counterintuitive things. We must step out of the zombie dance we are in... One lesson I’ve learned in covering dysfunctional conflict for the past five years is that most people, even very violent people, want to live. And they want their families to be safe. That is one thing we all have in common. Horrific incidents such as the one at Pelosi’s home offer an unusual (and fleeting) opportunity to invite people to do something differently.

Here's where she began to lose me as she explained solutions The bolds are hers.

First, sign the contract. All over the world, the U.S. government has pushed politicians to sign codes of conduct in times of conflict. Gang-violence interrupters do this every day in Chicago and other cities — urging combatants and their supporters to join a nonaggression pact. It’s time to invite American politicians and pundits to do what we’ve long asked other people, in far more harrowing circumstances, to do.

Uh oh, with the word "invite" my wishful thinking alarm just went off.
She went on:

In politics, this might mean pledging not to dehumanize one’s opponent on social media or elsewhere (by saying they are evil or hate the United States, for example). The codes could include vows to accept the results of the election after reasonable due process and, of course, to condemn all acts of violence, especially when they are perpetrated against a member of the opposition.

Really? What world is she living in?
Going down the rabbit hole to her next highlighted paragraph:

Walk the walk. Part of how we got into this mess is by watching politicians and pundits gleefully attack each other on TV. Part of how we get out of it is by doing the opposite: having credible messengers from each side demonstrate human decency.

She concludes that section with:

One thing Americans still do exceptionally well is to produce original, creative content. We tell stories that move people to imagine a better world. Now is the time to tell a different story, one of courage and decency alongside honest debate.

This is true, but assuming this content is produced, where does it go to reach the people who need it the most? Fox News, the fever swamps of social media? I don't think so.
Here's her next suggestion:

Right-size the fear. One predictable cause of collective violence is collective fear. When threat levels are high and fear is mixed with contempt, disgust and humiliation, humans will feel they have no choice but to annihilate one another.

This is what disturbs me in the last paragraph of the essay. Who are the "we" (my bold) below?

We, the public, are being manipulated by conflict mongers. We are being turned against each other and we are all suffering, to different degrees. It is time to question these storylines, to question our fears as often as we have learned to question truth. And then demand something radically different, something that will enable us to coexist. We know how to do this.

There is no collective "we" in the United States and other countries where there is a battle between a group, call them "bad people" who want a facisist country as long as their side is in control, and "good people" who want democracy where, to be corny, the Gold Rule prevails. Here and in countries like Brazil the most recently, the good people barely outnumber the bad.
There is, alas, no "we the public" - just as there is no longer a "we the people" as in the first paragraph in the U.S. Constitution.

We the People of the United States, in Order to form a more perfect Union, establish Justice, insure domestic Tranquility, provide for the common defence, promote the general Welfare, and secure the Blessings of Liberty to ourselves and our Posterity, do ordain and establish this Constitution for the United States of America.

Democratic and Republican politicians have taken to holding up their pocket sized copies of the U.S. Constitution. Here's something Trump and Obama have in  common. Someone decided it was worth publishing pocket Constitutions with them on the cover. The Obama is $9.99 and Trump's is $14.99. It's as it if has become a prop. 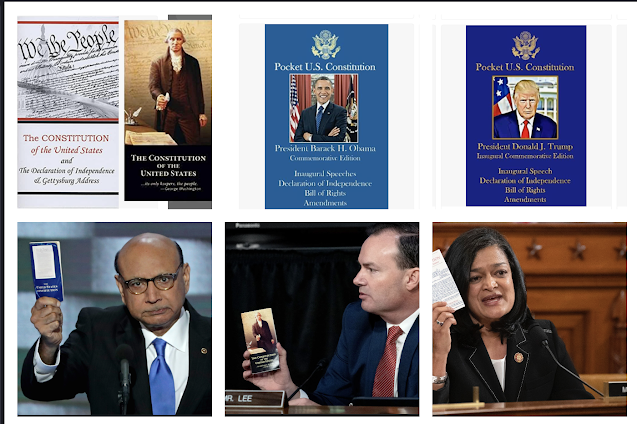 Historians and constitutional scholars correctly debate what the Founders meant by "we" and the words in the preamble to the document.

It certainly wasn't everyone in every case in every way. But it was clear that they wanted "a more perfect union" and to insure a mechanism for amending the Constitution over time. Perhaps some like George Washington,  Benjamin Franklin, John Jay, and Alexander Hamilton  envisioned the 13th Amendment freeing the slaves would be ratified  about 100 years later in 1865.

It is now up to the Supreme Court to interpret what the Founders meant and how it should be applied to the issues of the day. The basic question remains: what is the meaning of "we the people?"

Clearly, there is a significant segment of the population that doesn't want "we" to mean everyone.