Trump's weirdest, most stupid, and cruelest idea may have been for the US-Mexican border moat

Trump thinks he's fantastically fabulous. He is really both cruel, stupid, and if he's fabulous he's a fabulous fabulist. 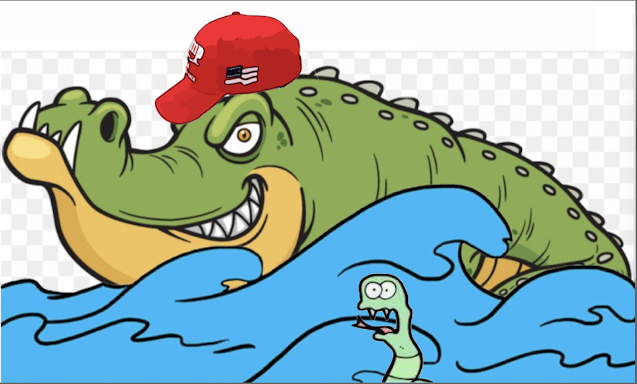 As usual, you can click images that aren't links to enlarge them.

Note that archives of all editions are on the right >> 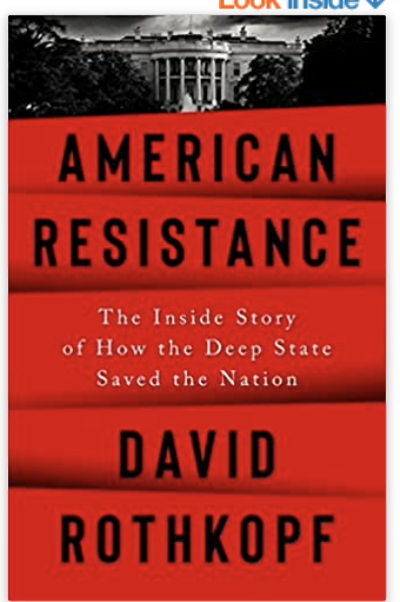 American Resistance: The Inside Story of How the Deep State Saved the Nation

As I was fitfully drifting off to sleep last night slowly but hopefully surely recovering my bout with pneumonia. I was listening to David Rothkopf (Wiki profile) being interviewed about his new book on NPR. This is from Amazon:

t could have been so much worse: a deeply reported, insider story of how a handful of  Washington officials staged a daring resistance to an unprecedented presidency and prevented chaos overwhelming the government and the nation.  Each federal employee takes an oath to “support and defend the Constitution of the United States against all enemies foreign and domestic,” but none had imagined that enemy might be the Commander-in-Chief.  With the presidency of Donald Trump, a  fault line between the president and vital forces within his government was established.  Those who honored their oath of office, their obligation to the Constitution, were wary of the president and they in turn were not trusted and occasionally fired and replaced with loyalists.  American Resistance is the first book to chronicle the unprecedented role so many in the government were forced to play and the consequences of their actions during the Trump administration. From Lt. Col. Alexander Vindman and his brother Yevgeny, to  Ambassador Marie Yovanovitch, to Bill Taylor, Fiona Hill, and the official who first called himself “Anonymous”—Miles Taylor, among others, Rothkopf examines the resistance movement that slowly built in Washington. Drawing from first hand testimonies, deep background and research, American Resistance shows how when the President threatened to run amok, a few key figures rose in defiance. It reveals the conflict within the Department of Justice over actively seeking instances of election fraud and abuse to help the president illegally retain power, and multiple battles within the White House over the influence of Jared and Ivanka, and in particular the extraordinary efforts to get them security clearances even after they were denied to them.   David Rothkopf chronicles how each person came to realize that they were working for an administration that threatened to wreak havoc – one Defense Secretary was told by his mother to resign before it was too late – in an intense drama in which a few good men and women stood up to the tyrant in their midst.

You can follow David Rothkopf on Twitter here. He is the host of "Deep State Radio" podcast. I expect we'll be seeing him interviewed on MSNBC and other stations about the important, and frightening, revelations in his book. On Sept. 26 he was on Lawrence O'Donnell's show talking about Russia and Ukraine. Here's the transcript.

I wonder if Fox News would dare put him on.

You can listen to the interview here:

In the interview one of the comic book weird, think DC Comics Bizarro World where everyone has overdosed on LSD, one idea he mentioned was this:

I wondered what a nuclear physicist with hurricane expertise would say what the ramifications of this would be. At least this flight of fancy wasn't manifestly cruel.
But Trump had another series of ideas for handling one of his major obsessions and these were downright sadistic. It involved his solution for dealing with the influx of brown-skinned people into the United States across the border with Mexico.
One idea also involved employing heavy ordinance. When he heard about caravans headed toward the country he asked top military leaders if we could shoot missiles at them. Somehow he was disabused of the idea that firing explosive missiles into an allied border nation was a good idea.
This came after he inquired about whether he could deploy the U.S. military to shoot people who approached the boarder and was told they weren't allowed to do this he asked whether our troops could just shoot them in the legs.
His most bizarre idea involved digging a coast to coast moat along the boarder. He suggested that alligators and snakes be put there to deter people from crossing. I dismissed the notion of putting highly lethal snakes in the water after doing some web searching. Water moccasins (or cottonmouth snakes) aren't particular aggressive and not that poisonous. Maybe Trump had the idea that he could import aquatic cobras from Africa but even I didn't know there was such a snake until I looked it up.
This is how Task and Purpose covered the story: 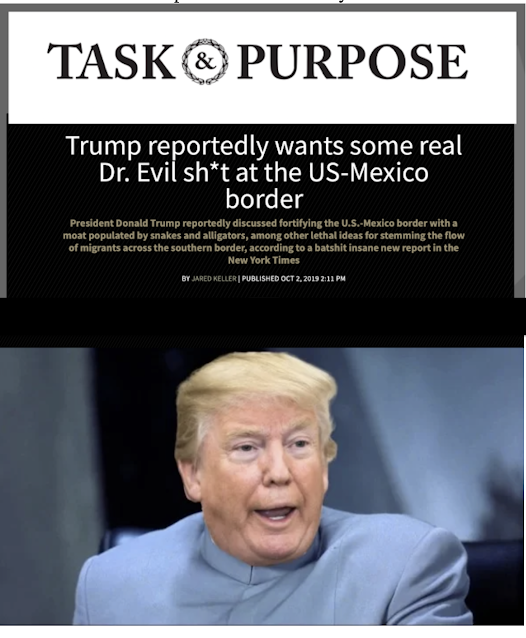 I thought about how brain-dead an idea this all was. For one thing people could just use boats of various kinds to cross even if there were alligators and snakes, and for another where would he get all the alligators and snakes? Another aspect of using these creatures is what would they eat beside the unlucky people they could devour?
On the plus side, watching so many alligators from the banks of the moat could be a tourist attraction. Vendors could set up there to hawk alligator wares and sell chunks of raw meat to feed them. On the US side they could sell shirts like this: 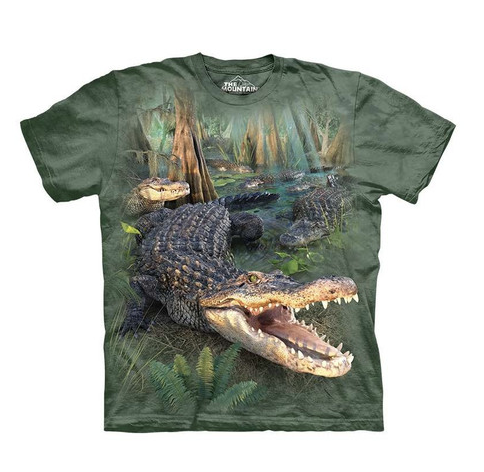 On the Mexican side they could see shirts like these: 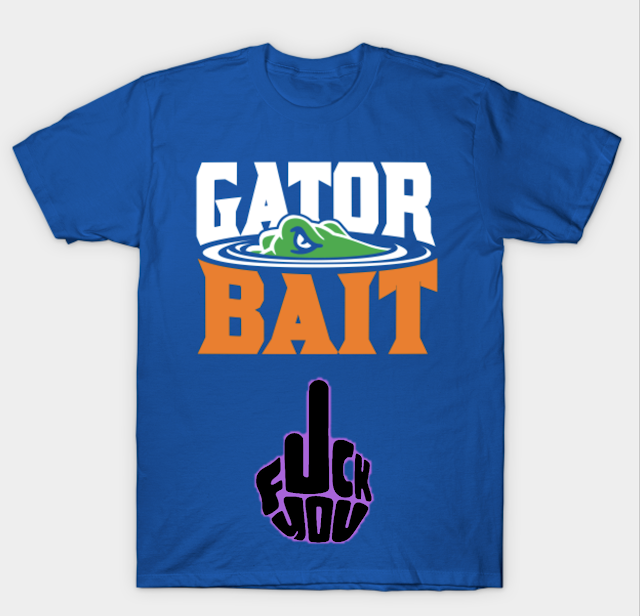 Of course let's not forget that alligator meat is a popular dish in many parts of the country so look for food carts selling many tasty versions as a local very fresh from the canal delicacy: 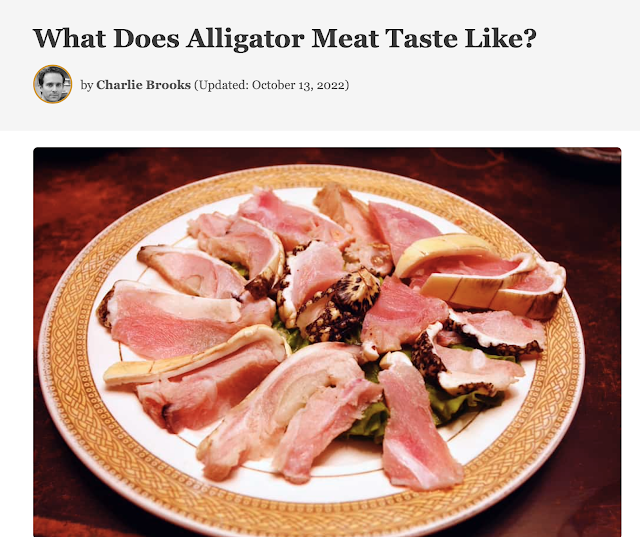 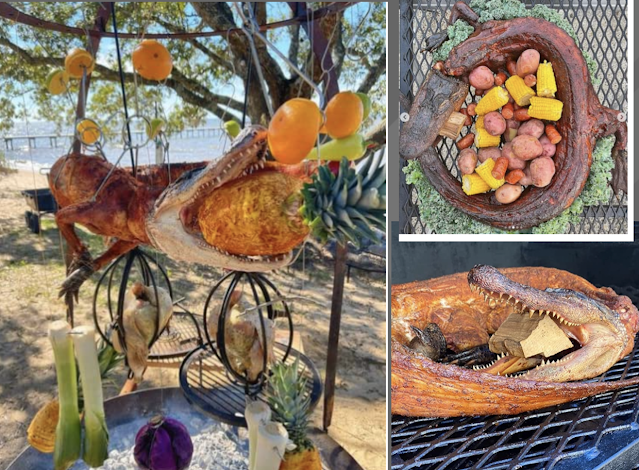 Above photo from Amazon.
IF THIS WAS BUILT IT COULD BE A MAJOR NATIONAL AND INTERNATIONAL TOURIST ATTRACTION.
For example there could be boat tours like this: 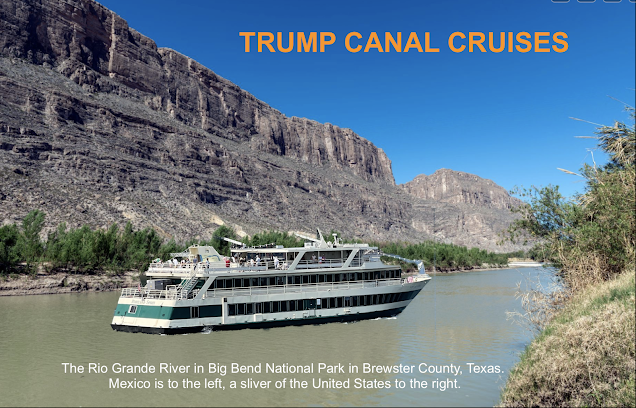 The background of the Rio Grande River is from this website The boat is The Portland Spirt. It is cut out from a photo I took near my house on the Willamette River (see original).
There's even more to this idea that piqued my interest along the line of just how much more stupid could this man be. By way of comparison the Panama Canal is about 50 miles long. The US - Mexico border is just short of 2,000 miles.
Even if the cost wouldn't be prohibitive what with moving contractor crews and their heavy equipment from all over the country there's a not so small matter of the differences in heights between the Atlantic and Pacific oceans. Depending on tidal cycles which differ between the two oceans the Pacific can be 20 feet higher than the Atlantic. This is why the Panama Canal has locks.
Hypothetically, let's say such a canal was to be build. It would mean that there would have to some sort to dam on the Pacific side to keep the water from flooding across our southern border. If there was no way to regulate this consider the possible effects aside from changing water levels and tides in both oceans. I have no idea what this would do.
Instead just look simplistically at what ocean tides flowing black and forth between the oceans would do if left uncontrolled.  To prevent erosion all banks of the canal would have to be reinforced to prevent the formation of bays and saltwater lakes on both sides of the border. Maintaining both sides of the erosion protection embankments would not be easy or cheap. Major storm and hurricanes could cause breaches.
If and supposedly when the giant Cascada Earthquake occurs the west coast would have other more serious problems but who knows what it would do to the Trump Canal?
The solution, cost be damned, is obviously a dam. This would have to be a world class damn, it would make Hoover look like a Hoover. 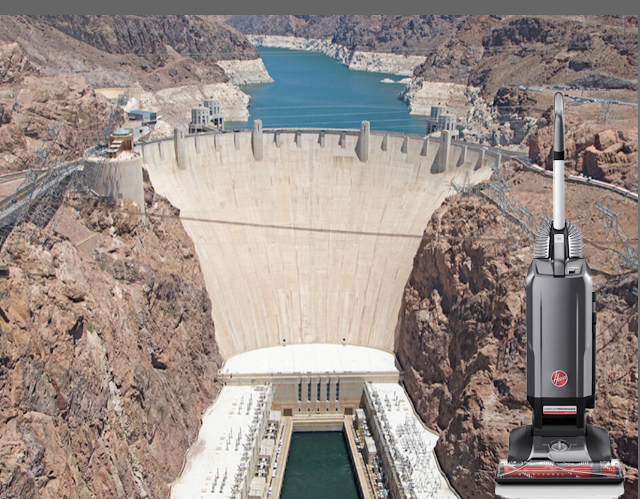 On another subject, here's my comment to this interesting article:

A neuroscientist warns: The war with Trump has just begun — and it’s deeply psychological

I don't think a third party stands a chance and is more of a distraction than anything. The Republicans have become the party of authoritarianism and in a sense the know-nothings of modern times. They are the perfect marks in their gullibility, their easily exploited fears of "the other" and their deeply rooted bigotry. Play on their insecurity, fears, and stupidity. That's the magic that has worked for Trump and his minions.

The Democratic Party is reality based and while not without flaws such as infighting and bad messaging, they are trying to maintain what used be values both they and Republicans could usually endorse.

I was hoping for some brilliant way to deprogram those member of the MAGA cult who have swallowed the Kool Aide - obviously they aren't reading articles like this on RawStory, other liberal websites, certainly not my own little blog, and wouldn't tune in to MSNBC even if they exclusively broadcast a no-holds-barred cage match between Trump and Nancy Pelosi. Okay, maybe they'd watch that. How many would read David Rothkoph's new book "American Resistance: The Inside Story of How the Deep State Saved the Nation" to learn just how cruel and stupid their Dear Leader really is. How many have or will listen to the Bob Woodward tapes and realize that Trump revealed just how dangerous his beliefs were.

Just how can those of us who see the dangers so well explained in this article to enough voters so they never elect Trump or a Trump clone?