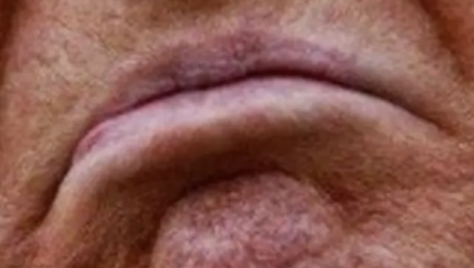 If it's really getting through to Donald Trump that the predictions coming from the likes of George Conway that he could actually end up in prison then the photo (below) used for the article in RAWSTORY about what Conway said on "Morning Joe" earlier today would be appropriate.

While I can't manage to muster any empathy for the malignant narcissist, sadist, and bully who has proved willing to do anything to maintain his dictatorial power, perhaps I can at least eke out a smidgen of sympathy for the poor man. Hmmm... is there anything smaller than a smidgen? 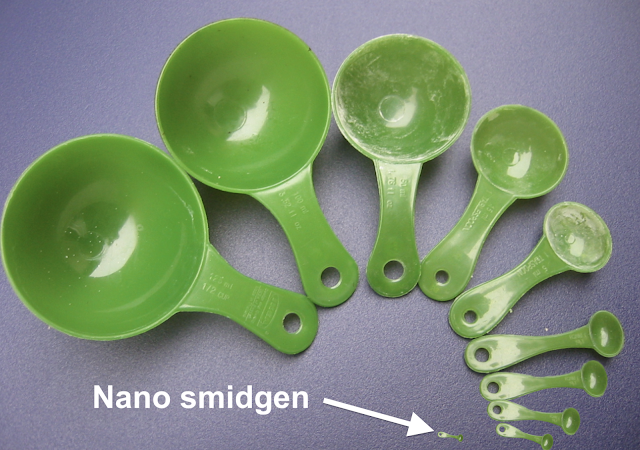 I want Trump to suffer the pangs of anxiety over the legal peril he is in,  but if he had a fleeting moment of angst and if, an if as big as the planet Jupiter, I wanted to cheer him up I'd have to reenforce his delusion of being invulnerable. In that remote or remotest possibility I'd tell him to turn his frown upside-down.

Here's the Rawstory article about what Conway said with my illustrative magic added. 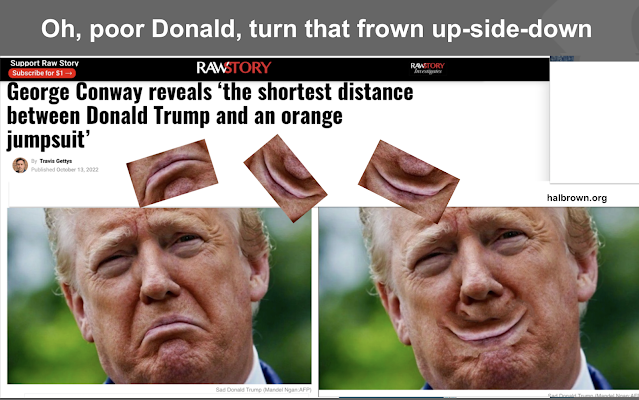 Conway told MSNBC's "Morning Joe" that although Trump's inciting the Jan. 6 insurrection was probably the most serious crime Trump has committed it would be a difficult case to prove. He said that the easiest case to prove was his likely violation of the Espionage Act. Conway said:

"That to me is the shortest distance between Donald Trump and an orange jumpsuit is that case. It's so simple. It's like the U.S. attorney trying to bring a big mob case against the Five Families and trying to connect it up to the boss and all of a sudden they get the call from the NYPD saying, hey, the big boss is loading jewelry on a truck at Kennedy Airport, and you know, that's what happened here."

"He's caught red-handed. Basically what he's done, refusing to give the documents back upon request is sufficient under the Espionage Act, and he's done that, and then you have the aggravating facts about how the volume of documents and the lying and how long it's dragged on. I don't know how they don't bring the case."

George Conway has been a thorn in Trump's side as his profile has increased as much as his girth since he became a Trump turncoat. He's penned OpEds and has been a frequent guest on MSNBC. 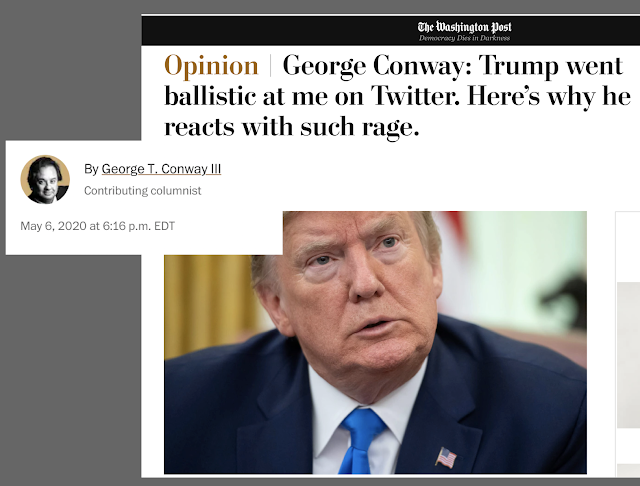 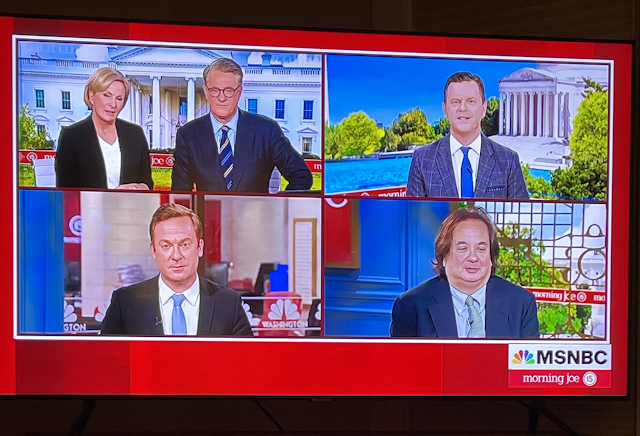 I can't find any recent articles about whether Trump still watches Morning Joe, however in 2017 it was clear that he did. This is from:

The president said Mika Brzezinski "was bleeding badly from a face-lift."

...to Mar-a-Lago 3 nights in a row around New Year's Eve, and insisted on joining me. She was bleeding badly from a face-lift. I said no!

Brzezinski appeared to respond to the president’s tweets with an image of a Cheerios box that says “Made For Little Hands.” 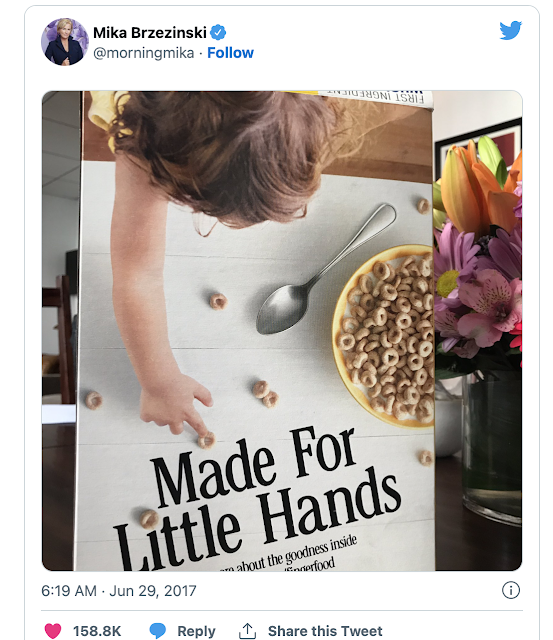 My sense is that while Trump, the inveterate television watcher, luxuriates in being praised on Fox News shows even he may not be able to resist checking in with "Morning Joe" to see what his nemeses are saying about him.

He knows that if he blasts out a Truth Social post about anything said about him on "Morning Joe" or any other MSNBC show, he'll only give them publicity so I think he'll be able to restrain his impulses since there isn't a damn thing he can do to shut them up.suits as his

Trump may avoid the wardrobe change into an orange jumpsuit, but if he's paying attention to what's happening in New York he may have to think twice about buying expensive new suits when can't squeeze into a girdle anymore: 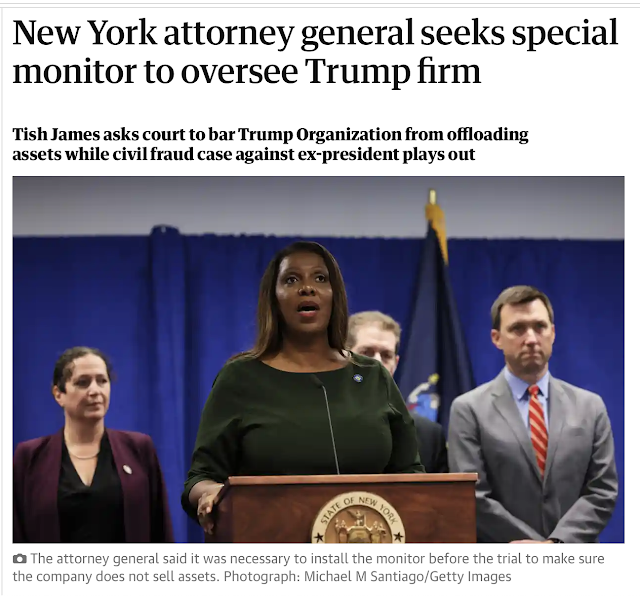 If Elon Muck buys Twitter, what with it's much larger audience than Truth Social has, I expect we'll see more impulsive tweets especially in the early morning when Trump may be groggy and not be able to sensibly resist engaging in a Twitter war with Joe and Mika. Assuming Trump come back to Twitter this will be fun to follow.

Here's a comment on this story from Ben Kalom:

Most of us would not wish him the Demolition Man one-liner I often quote to folks in jest, "Be Well, John Spartan!"
"I want Trump to suffer the pangs of anxiety over the legal peril he is in, ..."
Naw. a snarky "Naw!" I want his frown to become a perma-frown, like permafrost. I want his risorius muscles to atrophy to the point he cannot chew food properly, and a bolus migrates across the epiglottus into his cephalic tracheal opening and permanently obstructs it.
I want more than the pangs of anxiety.
I literally want the Big Mac attack to attack him.
I want his "Glorious, magnificent, stupendous, spektak-a-lur" bulls**t to end as a one liner obit, "Choked on a fried chicken bone..."
The only way this cult of personality ends is ...
The people need their human sacrifice. They need their blood lust sated.
Find him a bunker, let him join his "hero" Adolph in ending this sickness...
Then, maybe, just maybe, we can all recover... just a little bit... before we have to deal with the next anointed one...

The Conway interview has already made it into this Salon article: 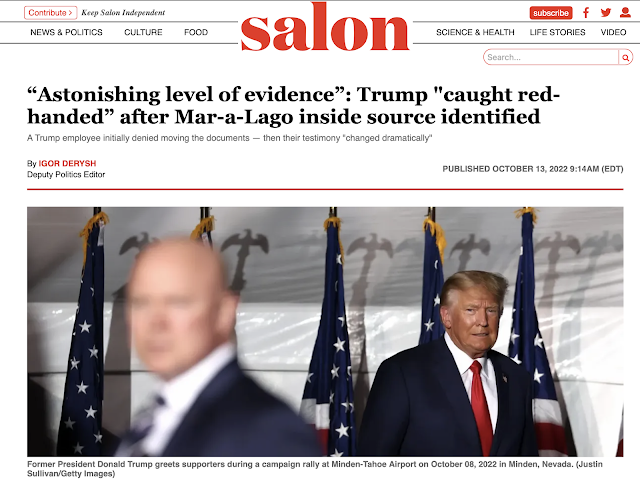 While some legal experts believe that there is evidence to charge Trump with obstruction, conservative attorney George Conway predicted that the "shortest distance between Donald Trump and an orange jumpsuit" is a case showing that he violated the Espionage Act.

"He's caught red-handed," Conway told MSNBC. "Basically what he's done, refusing to give the documents back upon request is sufficient under the Espionage Act, and he's done that, and then you have the aggravating facts about how the volume of documents and the lying and how long it's dragged on. I don't know how they don't bring the case." 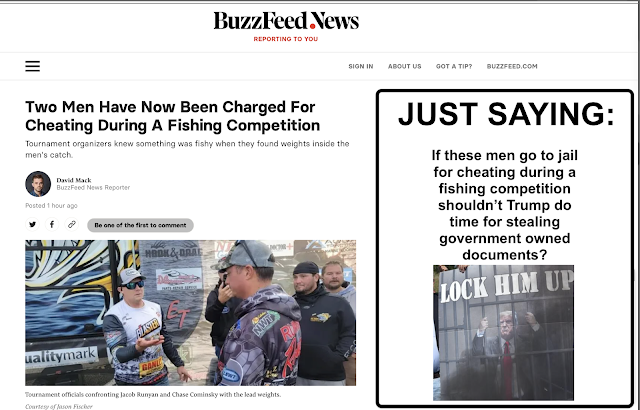 Viral video showed organizers cutting open the fish to reveal a total of 10 weights, each weighing either 8 or 12 ounces.

As Fisher yelled, "We got weights in fish!" the angry crowd booed the men, who were immediately disqualified.

On Tuesday, authorities seized a boat and trailer belonging to Comisnky that was used during the tournament.

If convicted, the pair could face a year in prison and a $2,500 fine on each of the felony counts.

The men are not expected to be arraigned until later this month, and it was not immediately clear whether they had retained an attorney. 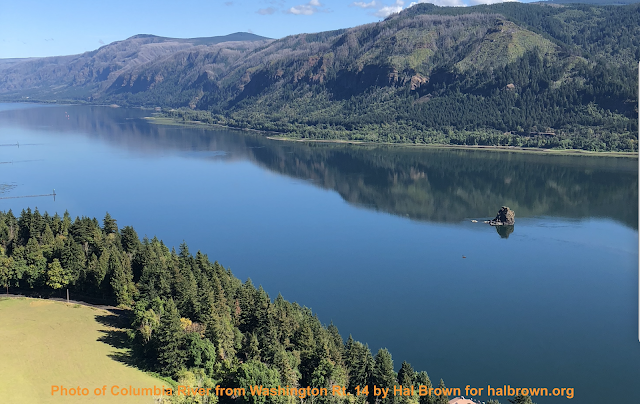