Is Elon Musk using psychedelic drugs? If not, should he?

Is Elon Musk using psychedelic drugs? If not, should he?
By Hal Brown
Follow on Mastodon

I looked at RawStory this morning and saw this on the subscription RawStory+ which I don't subscribe to.

The article is by Bobby Azarian is a cognitive neuroscientist affiliated with George Mason University and a freelance journalist whose work has appeared in The Atlantic, The New York Times, BBC Future, Scientific American, Slate, The Huffington Post, Quartz, and others. His research has been published in journals such as Cognition & Emotion and Human Brain Mapping.  Visit his website at www.bobbyazarian.com.

Even though to read this article from the RawStory website you need RawStory+,  you can read it without a subscription if you go the RawStory Twitter page here. 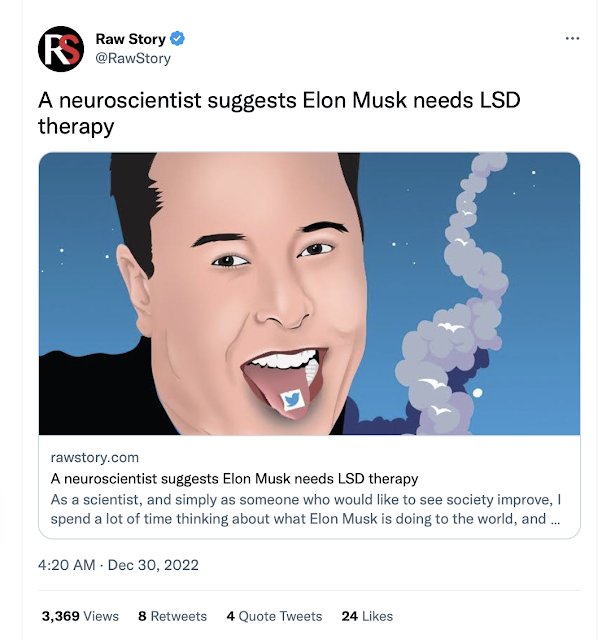 Azarian references this article which shows how taking LSD and similar drugs can increase empathy and political perspectives:

I think Musk has proved himself to be in a state of empathy deficiency. How he got there at some point in his psychological development is impossible to know. Perhaps his being on the autism spectrum has something to do this this. Consider:

What makes all this more than an excuse to suggest just that Musk needs an assist to enhance his empathy and taking psychedelics might be the key to increasing his moral and prosocial behavior, thus lessening or eliminating his immoral and anti-social behavior, is that Musk himself has promoted the use of psychedelics.

Going beyond Musk to other politicians who not only lack empathy but seem incapable of it the politician who comes to mind is Donald Trump, but clearly Ron DeSantis is also right up there. What we see in all three of these is an element of sadism and cruelty. The cruelty of Trump and DeSantis is evident in how they treated people trying to enter the United States at the Mexican border.

Trump is in my opinion and that of many other psychotherapists a malignant narcissist. I think DeSantis probably fits into this category as well. Musk is different in that while he is narcissistic he also is on the spectrum.

None of these people are about to get any kind of therapy, let alone psychedelic therapy.

Addendum: My state has just legalized the therapeutic use of psilocybin (aka Magic mushrooms).

I welcome comments to any of my blogs. Even though this page has a comment feature very few people ever use it. The best way to comment is to do so on Mastodon (but you have to join first) or on Facebook if have a page here.