Trump want's to imprison journalists if he's reelected. Would I make the cut? 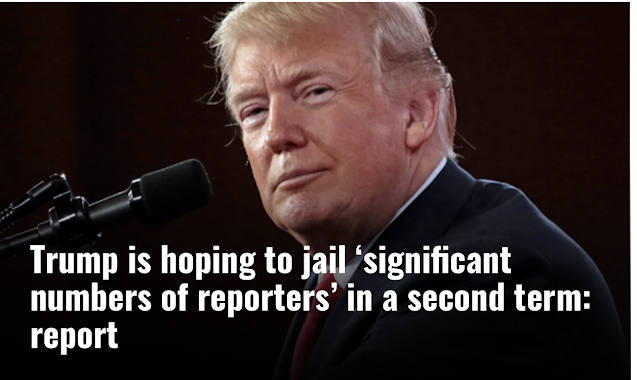 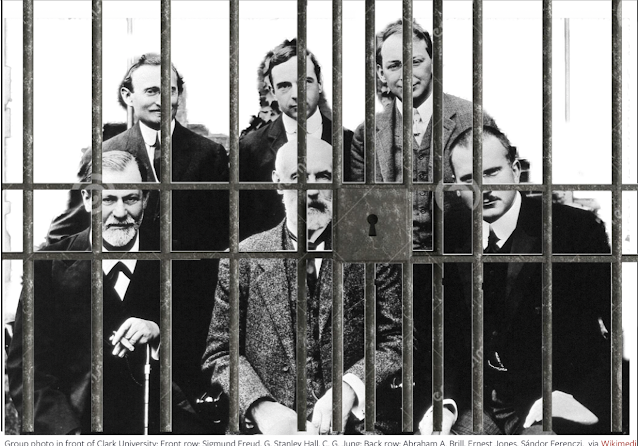 This is a photograph taken of Freud, and some of his earliest followers.
Reading "Trump is hoping to jail ‘significant numbers of reporters’ in a second term: report" by Bob Brigham in RawStory I thought about whether I might end up on his radar. After all, he may go after anyone who criticized him publicly and while I am a mere blogger, not really a journalist, I am also among many mental health professional who wrote about why his personalty disorders made him dangerous and unfit to be president.

Trump might be vaguely aware that a very large group of mental health professionals called him dangerous, or more likely he's oblivious to this but some of his zealous minions might inform him, therefore in addition to putting journalists in prison he might want to round them up too.

If he managed to lock up a significant number this would severely exacerbate the mental health crisis as therapists would be even harder to find than they now are.

One of the terms frequently used to describe Trump was malignant narcissist so his gestapo might get to web searching who wrote about him having this disorder.

If his lackeys Googled Trump malignant narcissist they'd have to go to page three to find something I wrote. Find me they would. Who is the guy they might say, never heard of him but what they hell let's show that nobody no matter how obscure they are can escape our reach.

I admit that I am pretty impressed with myself even making it onto page three of that Internet search considering who else's articles and publications precedes mine. 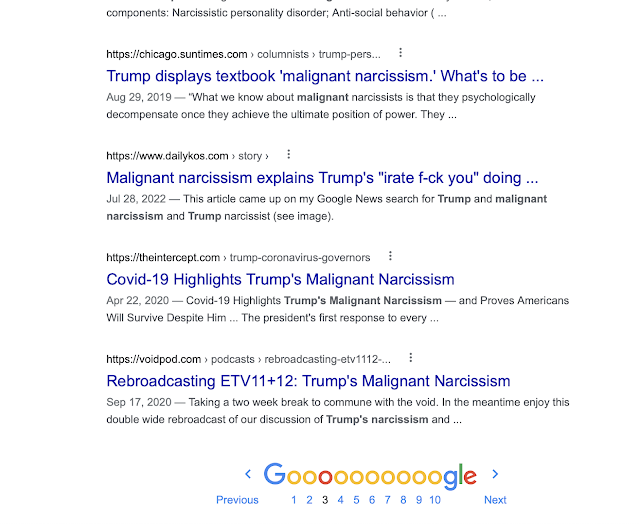 My story is third from the bottom shown above.

This is what I wrote. It clearly makes both Robert S. Becker, whose article gave me the idea for mine, and me candidates for Trump's new gulag or an expanded Guantanamo Bay although Becker is actually well known.

Only as an irate “F-ck You” does the mystery clear: why Trump fiddled for 187 minutes while the Capitol burned

Below are excerpts from Robert S. Becker’s (profile) “Nation of Change” essay which I recommend reading in its entirety.

When months later no plausible, tactical or rational explanation appears (for doing nothing to call off the rioters), must we not look to psychological derangement? Here was one profoundly sick puppy without a clue what served (or demolished) his best interests. When reasons evaporate, look to irrationality, thus I invoke pathology. Trump’s mob fulfilled his life quest to bellow forth the loudest “F-ck you” to as many people as possible from the greatest podium imaginable. And he was protected (he falsely schemed) by delegating the onslaught to moronic minions. The rampage against the Capitol was, to use Trumpian diction, the “perfect” volcanic explosion to suit volcanic rage. Finally, he found sufficiently cruel, destructive punishment against all “enemies” who ever injured his majesty, declaring “you are not lovable, even a monster; you are not the invulnerable, unstoppable world leader you fantasize; and your electoral temper tantrums will crash and burn.” These are unendurable messages for a deeply scared narcissist.

Thanks to Trump’s transparent parade of clinical deviance, those paying attention comprehend the basic dynamics of the malignant narcissist. It’s not that complicated: the sickest narcissist insists on being a big shot, though feels wounded (whatever the cause) and unworthy (terrified he’s just an ordinary putz). As a result, he (or she) cannot confront his internal contradictions (never therapy), defaulting to denial and self-deception. Trapped in this doomed dynamic, the narcissist tries every which way to fill the emotional (love) void but mistakenly with material success, status, treasure or fame. What Jan. 6 exposed is the malicious narcissist at the end of his rope: every phony election maneuver, from November through January, blew up in his face, doubling down the agony.

Trump aside – and so past his pull date he’s morphed into a political pestilence for both parties – there remains a glimmer of hope for past supporters willing to escape their fruitless messiah trip. True, loyalty to Trump after his execrable performances remain shocking to this day – as sobering as all those misguided, aggrieved 2016 citizens who judged this unqualified TV reality star/con artist a positive, constructive leader. Even take down the secular, urban, coastal elitists and the fabricated, demonic deep state. That turned out well – in fact, reinforcing establishment forces now pooling resources to put an end to the Trump terror.

Over time, multiple indictments and multiple trials, even a conviction or two, must occur before America can close out the terrible Trump treachery. How much resolution happens depends on how effectively current leaders, prosecutors and juries confirm for all time and for all who will listen who Trump was and what he remains. If not, the future is not just darker than we imagine, but darker than we can imagine.

Once again we see that Trump’s behavior is easily understood, and is predictable, based on an understanding of the psychopathology of malignant narcissism. (See Unpacking Malignant Narcissism)

A few readers of some of my diaries about Trump’s malignant narcissism have commented basically “so what, there’s no need for a diagnosis, he’s just pure evil, what are we going to do about him?” The answer I keep giving is that by understanding the dynamics of Trump’s we can predict what he will do, or try to do, and we can best develop ways to counter it.

We have already seen his rage directed at anyone or any entity he feels slighted or attacked by. We have seen him support lunatic fringe GOP candidates in some primaries who, if they win, stand little chance against their Democratic opponents. The enraged malignant narcissist often does irrational and self-defeating things.

These manifestations of a wounded ego, and indeed Trump as Becker puts it in his article, is a “profoundly sick puppy”, serve to vent some of his frustrations but they are not well thought out and many may be self-defeating. Consider most recently his trying to sue CNN over using the term “The Big Lie.” There’s no way this will accrue to his benefit, let alone end up in a legal win, but it will keep The Big Lie in the news.

His threat against CNN or something like it was predictable by understanding Trump’s malignant narcissism.

Trump will always be Trump. He is the ultimate narcissist and I rather doubt he allows himself to consider the possibility that someone he probably considers a wimp (this man)...

can ever bring him down. He will never change his core self, and if anything will be his undoing this will be it. 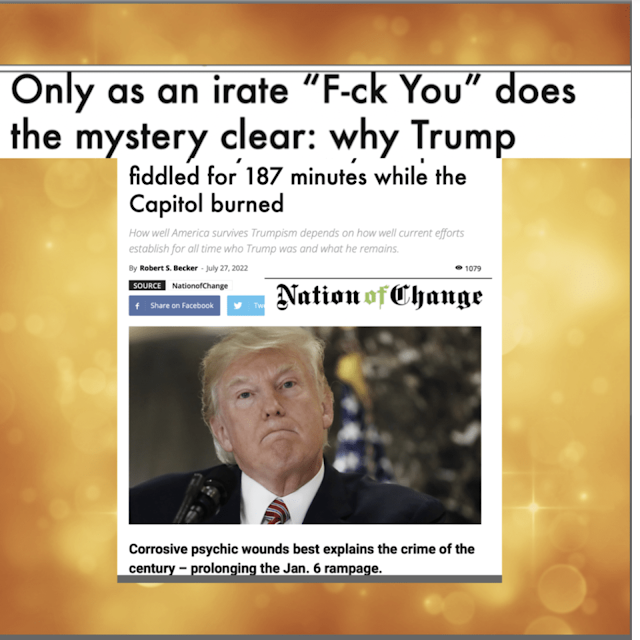