Trump's "very famous pollster" John McLaughlin isn't THAT John McLaughlin
by Hal Brown
Scroll down the page for news stories that break during the day which I think reader would be interested in. 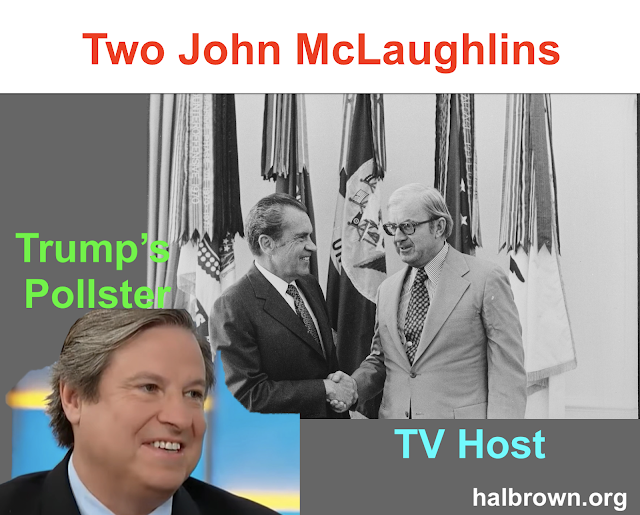 This is the HuffPost story that led me to see if Wikipedia had added breaking news to to profile of the only "famous" person named John McLaughlin I'd heard of:

Former President Donald Trump made a claim on Wednesday that was wild by even his lofty standards. He said he would’ve not only defeated an undead George Washington and Abraham Lincoln in an election, but would’ve wiped them out in a historic landslide.

Speaking at the Hispanic Leadership Conference in Miami, Trump said:

“I remember a very famous pollster, very well known, John McLaughlin, came to my office just prior to the plague coming and he said, ‘Sir, if George Washington and Abraham Lincoln came alive from the dead and they formed a president-vice president team, you would beat them by 40 percent.’ That’s how good our numbers were.”

Notably, Trump did not mention the condition of the zombie presidents in this wild scenario, which would mean a 70-30 landslide victory by Trump... 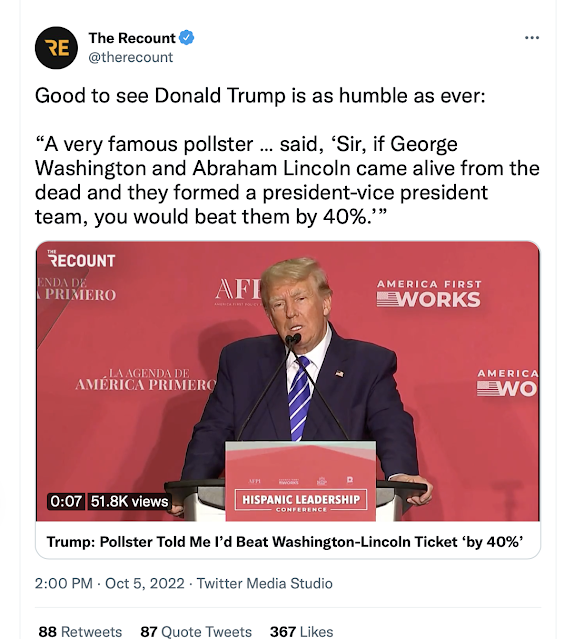 I remember John McLaughin as a TV host but I didn't know he was a pollster. I wanted to determine whether he was, and if there was any verification that he ever met with Trump to telling him about polls that showed him beating George Washington and Abraham Lincoln in a hypothetical race.
It took a minute to find out that there's another person with that name who is a pollster. 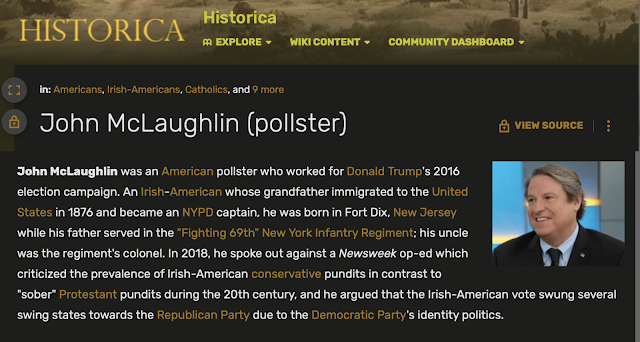 John McLaughlin was an American pollster who worked for Donald Trump's 2016 election campaign. An Irish-American whose grandfather immigrated to the United States in 1876 and became an NYPD captain, he was born in Fort Dix, New Jersey while his father served in the "Fighting 69th" New York Infantry Regiment; his uncle was the regiment's colonel. In 2018, he spoke out against a Newsweek op-ed which criticized the prevalence of Irish-American conservativ pundits in contrast to "sober"  Protestant pundits during the 20th century, and he argued that the Irish-American vote swung several swing states towards the Republican Party  due to the Democratic Party's identity politics.

We may never know whether Trump believed that his very own John McLaughlin was one and the same John McLaughin who was actually famous.

It is certainly possible that the meeting Trump described actually occurred and that pollster McLaughlin actually conducted the poll he told him about.

I wouldn't be surprised if this actually happened and since the McLaughlin in question is still alive I hope someone asks him about this.

What does surprise me is that assuming this incident occurred  Trump waited until now to tell this story. It is possible he forgot about it, though if he thought McLaughlin was really "very famous" it seems like he would have related this claimed poll result a long time ago. 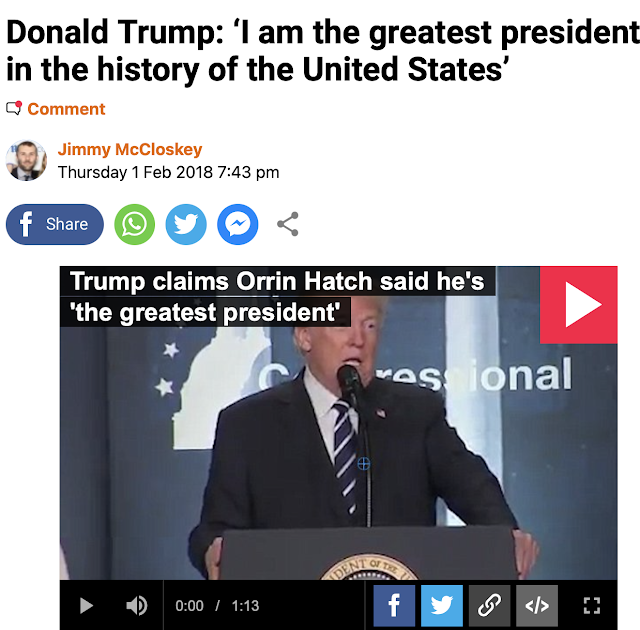 ... and then there are all the cartoons and photoshops of Trump on Mt. Rushmore (Google images): 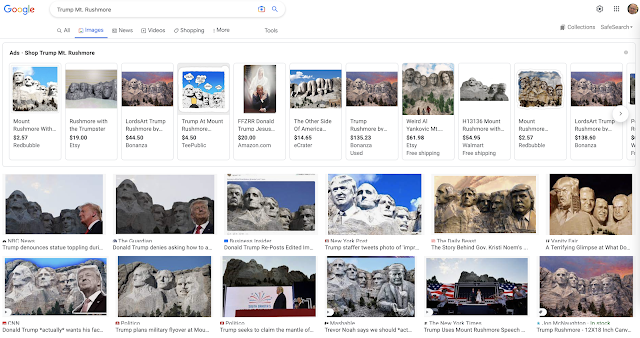 There are three basic kinds of narcissism. One is usually called healthy narcissism which is tied in with having a high level of self-esteem and which often motivates people to excel putting aside elements of self-doubt when faced with difficult tasks.

Then there is the pathological narcissism present in people who have all or most of the characteristics of narcissistic personality disorder which by now most reader are familiar with since numerous clinicians have explained how Trump fits into this diagnosis:

The Diagnostic and Statistical Manual of Mental Disorders, Fifth Edition (DSM-5) describes NPD as possessing at least five of the following nine criteria.[2]

Then there's a third kind which hasn't made it into the diagnostic manual. This is delusional narcissism.
Mary Trump explains as a clinical psychologist how her uncle fits into this category here:

Delusional narcissism is the stuff of fictional characters whose braggadocio or imagined grandiose view of themselves is magnified for comedic effect. Think of the Evil Queen who utters the famous line “Magic mirror, on the wall – who is the fairest one of all?” Of course, think of the preening narcissist Donald Trump: 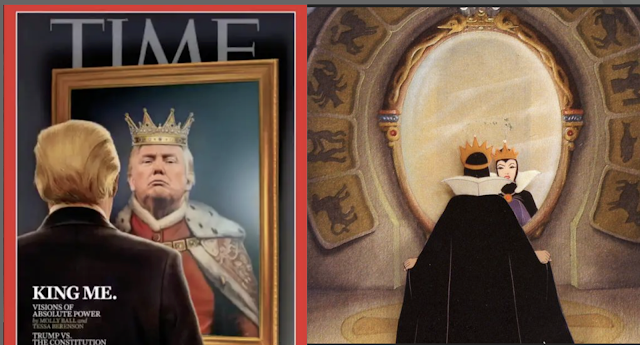 .....
While on the subject of narcissistic people in the news, there's Elon Musk, who I wrote about on Monday:
Of course he wants to own Twitter. He's the world's richest person so he doesn't need the money. This is all about keeping himself in the news. Once he takes control most of what I read says that one of his first acts will be to re-instate Trump's account.
Assuming Trump starts tweeting there, which I think he will, it will render his Truth Social platform just about worthless. I don't know if Trump has any of his own money invested in Truth Social but if he does it will be flushed down the toilet. Even if he doesn't loose money it will on the list as yet another of his failed ventures.
He'll spin his return to Twitter as a victory and revel in having a large audience for his tweets. However, what he will also have to deal with is the media republishing some of the most snarky of the replies to his tweets the way they post the tweets like those shown in the HuffPost article referenced in my story today.
I will post news stories which pique my interest as they break though the day. Here's some you may have missed.

Of all the details about Donald Trump in Maggie Haberman’s new book “Confidence Man,” the New York Times reporter said the former president was most riled by her reporting that he tore up and flushed papers down White House toilets.

“I think that was what upset him the most,” Haberman told Stephen Colbert on Tuesday’s broadcast of “The Late Show.”

“He had an immediate and pronounced and angry reaction to that reporting when I put it out many months ago,” she continued. “He issued a statement, it was a phone call to the world, and I think his exact statement was, his question was, ‘Who would know that?’ Which I think was actually a literal question that he was asking, but he asked it out loud.”

Trump in response to the story “spent some time asking his aides, ‘What do you think of that reporting?’” Haberman added. “Usually that’s because he’s trying to figure out whether something is damaging to him or not or how much more could be there.”

When Haberman initially broke the news, Trump denied the claim. The reporter later tweeted photographs of papers, with what appeared to be Trump’s handwriting on them, clogging up toilet bowls.

What world do we live in that a satirical outlet defends First Amendment rights better than police and our courts?

Feds say there's evidence to charge Hunter in relation to taxes and a gun purchase, but his enemies want to squeeze