Will he or won't he testify? Don't assume he won't.

Will he or won't he testify? Don't assume he won't.

As far as I can tell this (in my bold) is the common if not universal opinion being expressed in the media about the prospect of Donald Trump not complying with the Jan. 6 Committee subpoena and testifying:

The subpoena is not about getting former President Donald Trump to testify -- which almost certainly won't happen with 10 weeks or so left in this Congress and, in all likelihood, in the existence of the House Jan. 6 committee that voted on Thursday to issue it. (From ABC News) 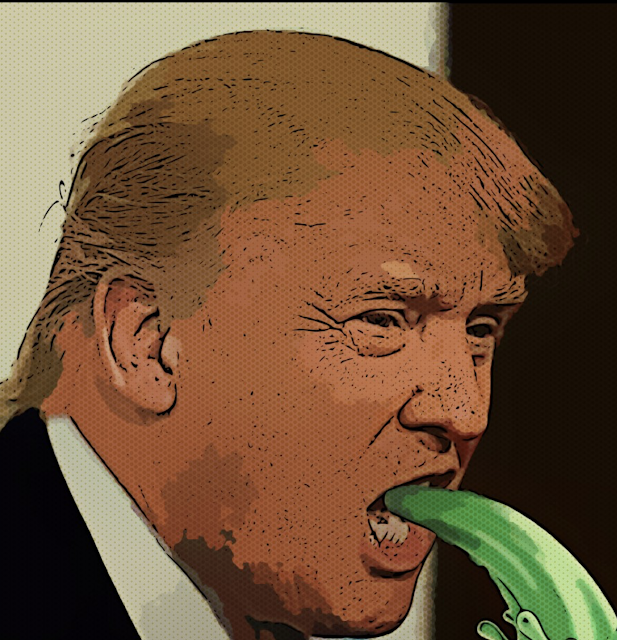 Updated below as news on this story breaks:

Maggie Haberman of The New York Times reported, "Since it became public that the House select committee planned to subpoena Trump for his testimony, the former president has been telling aides he favors doing so, so long as he gets to do so live, according to a person familiar with his discussions."

"However, it is unclear whether the committee would accept such a demand," Haberman noted.

This doesn't surprise me. He thinks by going live without a prior deposition he will be pitching a curveball to the committee, and the narcissistic part of his malignant narcissism thinks he will be able to outwit members of the J6 Committee.

He thinks he can showboat his way through a hearing and desperately wants a nationally televised megaphone. He knows that there are no scheduled further hearing but is well aware that if the committee agrees to having him testify they will schedule another one. He knows it will have a huge audience. Look for it being televised in prime time.

In his delusional grandiosity he doesn't think the committee will be prepared for him or will cower in his presence.

He is so very wrong.

He will be walking into a perjury trap if he lies, and if he takes the Fifth he will be announcing his guilt. If he tries this the committee should make him recite the Fifth in its entirety each time - not to tersely mutter "the Fifth" as others have done. Veiwers need to be reminded of this part: "I refuse to answer questions or provide information that might incriminate me."

So I say to Trump, bring it on.

After the Jan. 6 committee unanimously voted in favor of subpoenaing former President Donald Trump, he’s been telling those in his orbit he’s not opposed to the idea. “The former president has been telling aides he favors doing so, so long as he gets to do so live, according to a person familiar with his discussions,” The New York Times’ Maggie Haberman reported on Thursday evening. “However, it is unclear whether the committee would accept such a demand.” Not everyone in Trump’s circle is convinced that him testifying would be a wise idea, however. “He should not,” a Trump adviser who speaks regularly with the former president told The Daily Beast on Thursday evening. A Trump spokesperson didn’t immediately return The Daily Beast’s request for comment. Taking to Truth Social, Trump said he will share his response to the subpoena Friday morning, while claiming the committee is “a giant scam, presided over by a group of Radical Left losers, and two failed Republicans.” 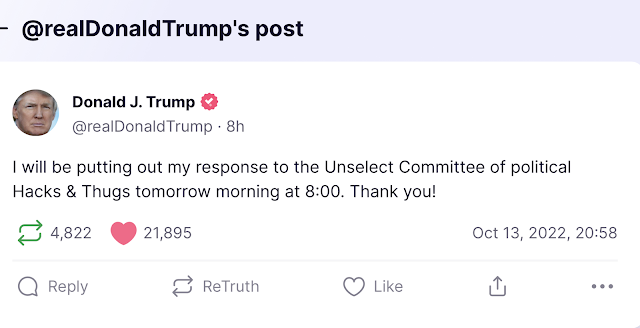 Trump posted this yesterday so the sis the morning Trump promised to respond to the subpoena. It's 5:08 here in Portland, Oregon, so it if Trump is true to his word here his decision should have been posted eight minutes ago... I'll post it when I find it.

This is now on Truth Social: 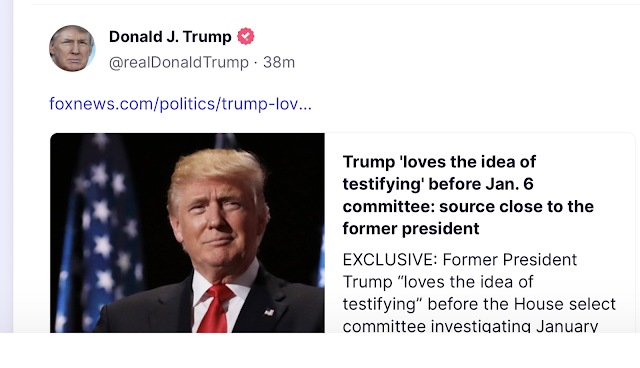 It links to this FoxNews story: 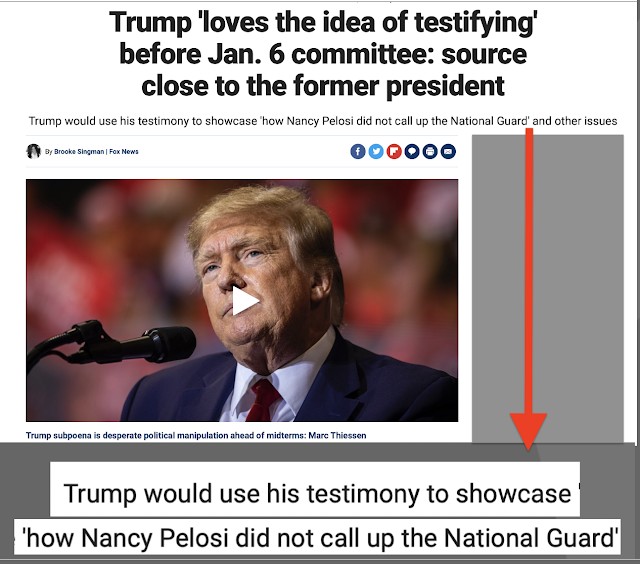 Excerpt below shows a major fly in the ointment also in the subtitle above and the idea that the one person who could have easily assured that the National Guard was expeditiously dispatched to the Capitol was Trump himself.

The source said that if Trump complied with the subpoena and testified, he would "talk about how corrupt the election was, how corrupt the committee was, and how Nancy Pelosi did not call up the National Guard that Trump strongly recommended for her to do three days earlier on January 3, 2021."

Videos taken by Nancy Pelosi's daughter Alexandra, a documentarian covering the Capitol proceedings on Jan. 6th, were shown for the first time in yesterday's hearing show Pelosi and Senator Schumer trying desperately to arrange for the National Guard to basically saved members of Congress from the mob and allow the certification to continue. 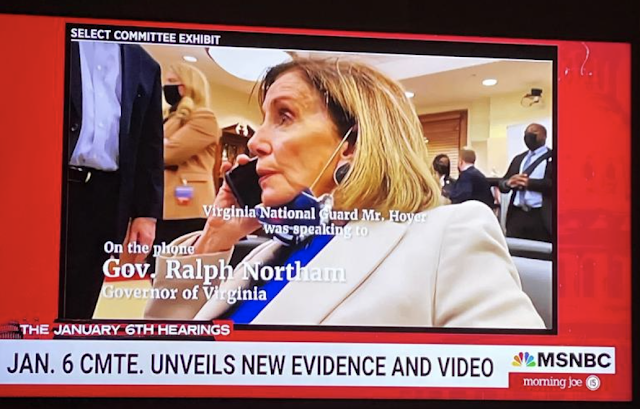 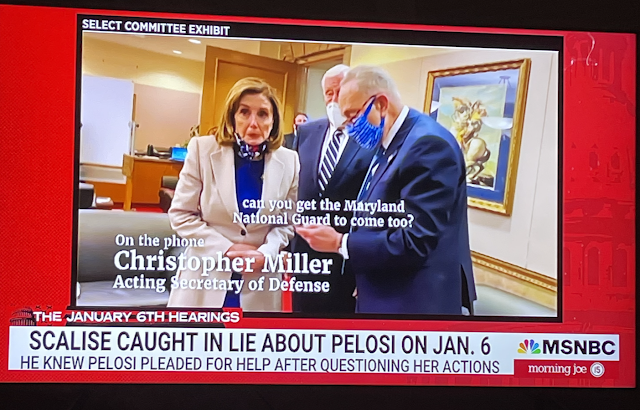 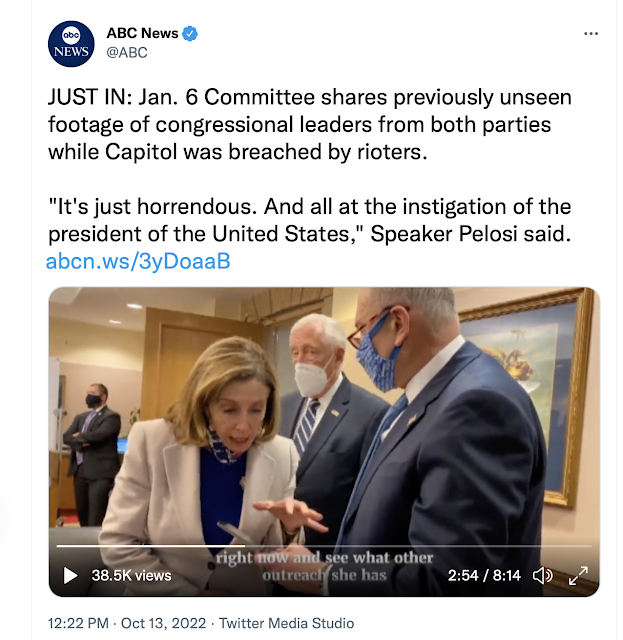