What does it mean when a former federal prosecutor say the DOJ should stop playing Trump's reindeer games?

What does it mean when a former federal prosecutor say the DOJ should stop playing Trump's reindeer games?

I didn't understand what was meant by the reference e to reindeer games in this quote the title and text from former federal prosecutor Glenn Kirschner who said enough is enough and the DOJ needs to indict him in the Katie Phang show in the above article:

"Donald Trump is now exposing himself as somebody who is willing to take property that he stole and leverage it to his own benefit for other information that he wants, that he has no right to, from the federal government," he elaborated. "I analogize it to a situation where your neighbor stole your TV, and then said if you want to back give me $500. Well in concrete terms, that's what Donald Trump was doing with these stolen documents."

The use of the term "reindeer games" puzzled me so I did some research. Here's the plot of the movie which takes place around Christmas.

I decided to look up the meaning and it then became clear why Kirschner used it.

Here's an excerpt from the article about the term.

As early as the 1960s, lesson plans suggest Christmas-themed reindeer games children can play, referencing the song (Rudolph the Red-Nosed Reindeer). These games, while allusive, are fun-spirited, whereas the phrase reindeer games took on a snarkier tone in mainstream culture as a term for the cruel or bullying actions popular in-groups used to exclude outsiders.

The 1988 dark comedy Heathers notably features such a use of reindeer games when a snooty clique leader (Kim Walker) delivers a threat to an unruly follower (Winona Ryder) to change high schools: “Transfer to Washington. Transfer to Jefferson. No one at Westerburg is going to let you play their reindeer games.”

Reindeer games also supplied the title of a 2000 thriller starring Ben Affleck and Charlize Theron. Set during Christmas, Reindeer Games is about a complex casino heist (the robbers dress up in Santa Claus suits) and the various manipulative “games,” or deceptions, they end up having to play to pull it off. Reindeer games, here, is used ironically for Christmas-set scheming.

Of course what Trump and his "clique" are doing is doing what Trump does all the time as a classic bully. He's a malignant narcissist whose stock in trade is being a bully.

Malignant narcissism is a psychological syndrome comprising an extreme mix of narcissism, antisocial behavior, aggression, and sadism. Grandiose, and always ready to raise hostility levels, the malignant narcissist undermines families and organizations in which they are involved, and dehumanizes the people with whom they associate  Wikipedia

Perhaps I am out of it when it comes to understanding some colloquial expressions, but I think many viewers of the Katie Phang show or readers of RAWSTORY won't know exactly what was meant by the reindeer games reference although in context it sounds like it is just a term referring to another nasty Trumpian manipulation.

Below, as I find stories, 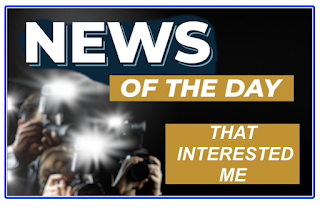 with my own comments.

Republicans are salivating about the prospect of winning one or both houses of Congress so they can open committee investigations into Hunter Biden. However, waste of time as this would be, ultimately whether he's prosecuted or not is a decision that rests with the DOJ. 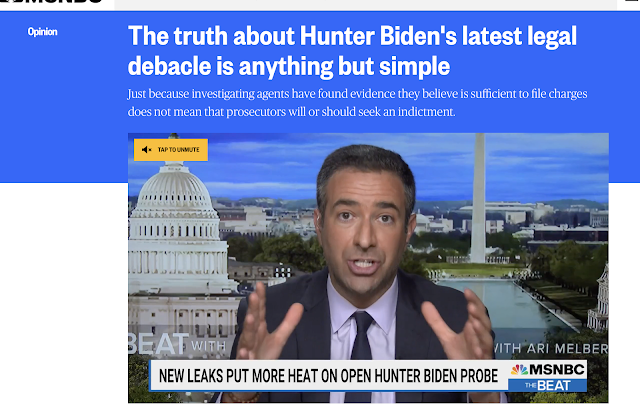 The decision about this is, as the headline above shows, is anything but simple. If the the. U.S. attorney who will make this decision follows the rules and usual procedure, it will be difficult to claim the fix was in. Here's why:

The decision of whether to charge the younger Biden will be made by David C. Weiss, the U.S. attorney in Delaware who was appointed by former President Donald Trump. Unlike other U.S. attorneys, he has not been replaced by Biden. Attorney General Merrick Garland has also promised not to interfere in Weiss’ decision. According to Garland,“We put the investigation in the hands of a Trump appointee from the previous administration.” 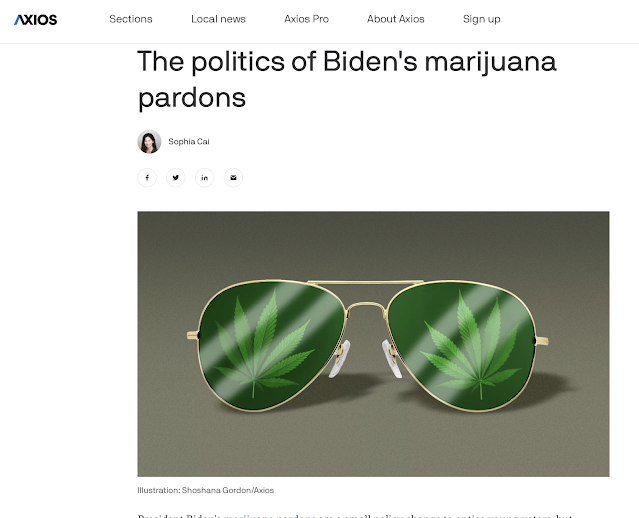 I suppose Gov. Abbott thinks most Texans smoke Marlboros or chew tobacco and figures nobody in Texas uses pot. 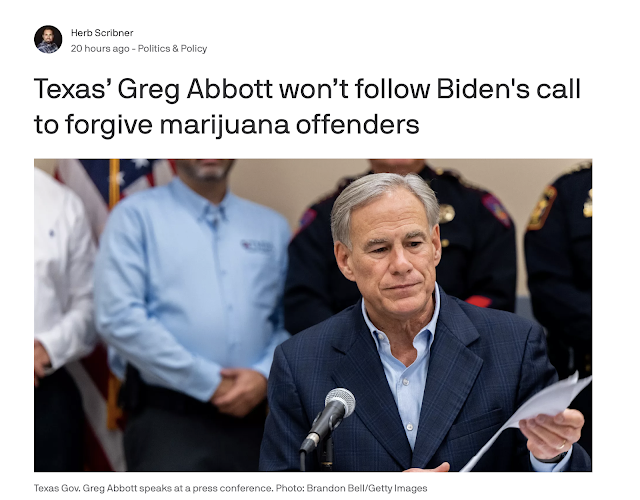 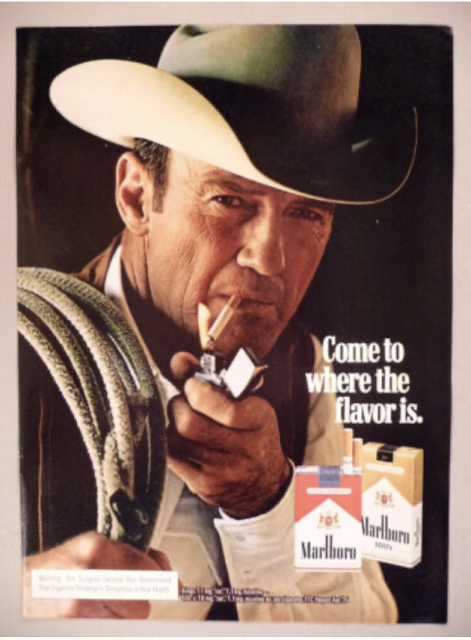 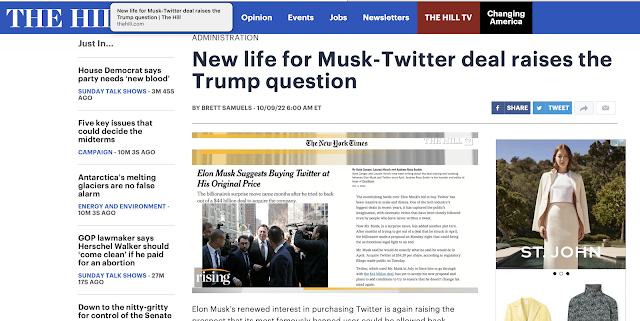 If Musk buys Twitter and allows Trump, who was banned, back will he succumb to having a much larger audience or be content to keep using the platform he had created just for him to get his message out. Perhaps he'd stay on Truth Social as the following quote from The Hill article says he will. Or maybe he has some much ego, or money, or both invested in his platform he will stick with it.

Elon Musk’s renewed interest in purchasing Twitter is again raising the prospect that its most famously banned user could be allowed back.

Former President Trump has been adamant that he will stick with Truth Social, the fledgling social media platform he helped found, regardless of whether he is welcomed back to Twitter. But experts and Trump allies believe the allure of the massive Twitter audience would be too great to resist, putting his future there front and center as the Musk deal shows new signs of life.

As things stand now just about all the posts he puts on Truth Social make the news so it may not mean much to him to be able to put the same messages on Twitter. Twitter has a major drawback for him. This is that his tweets generate many critical and sarcastic replies, some with snarky illustrations, with a few of the most biting or nasty being republished on various websites.

Here's a related article which is from The Miami Herald:

Behind the scenes of how Trump’s Truth Social was born, and how it could fall apart

Aside from losing face it's hard to see if Trump would lose anything else if Truth Social went under: According to the article the former president put up no equity but controls almost all of Trump Media’s stock.
With Trump not posting there, the platform which was supposed to attract a range of conservative posters failed to do so. It was primarily a way for Trump to get his message out to his cult. He's the one who is keeping it afloat.
From The Herald: In mid-August 2022, Trump was reported to have 3.9 million Truth Social followers. He previously had 89 million on Twitter and 34 million on Facebook before the twice-impeached president was banned for repeatedly claiming the 2020 election was “stolen” from him.

Michael Cohen, a tale of redemption, addresses the fate of Donald Trump

I was talking to a friend on the phone when Michael Cohen was on MSNBC. I said that he was a tale of redemption that I really believed in, or wanted to. I am generally cynical abut such things. I think of the inmates who find Jesus in prison to impress the parole board. With Cohen I think he is probably or mostly sincere even though taking the stance he has keeps him in the public eye and will help him sell books. 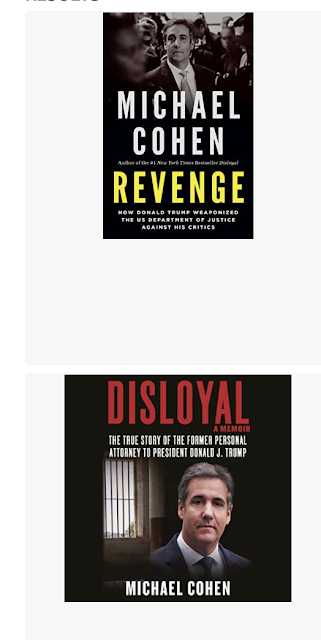 I'll maintain some skepticism which is why is say he's probably or mostly sincere. I still can't help liking the guy.

Below is an interview with him: 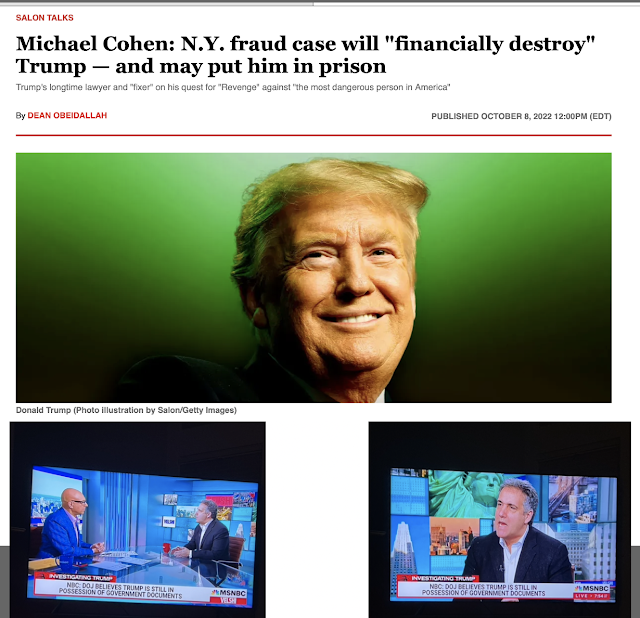 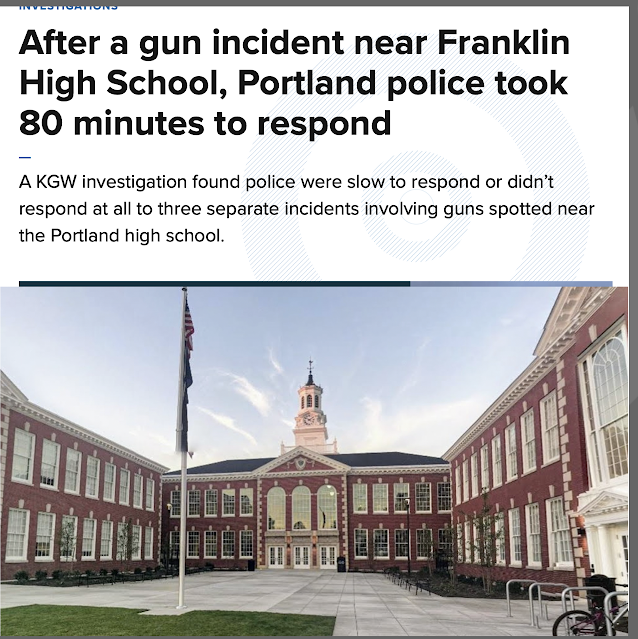 I'd like to know what the Portland police considered a higher priority than a call reporting someone with a gun outside a school, anyone, let alone a call from a school official. They should have responded within minutes with more than one car. Have an EMT unit respond also seemed appropriate. I know downtown traffic can be bad at times but Portland p0lice cars have lights and sirens. 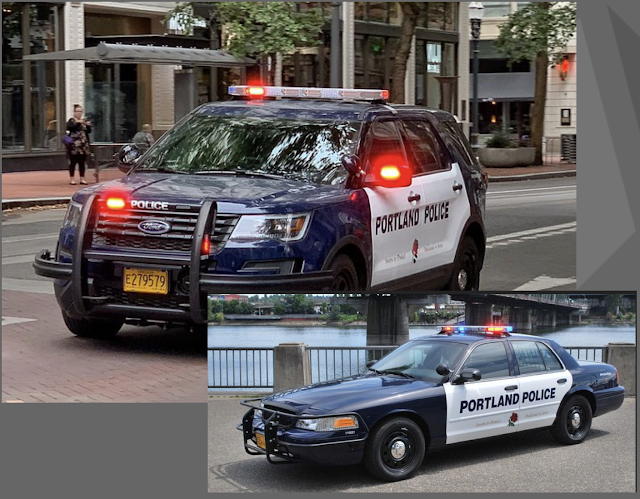 Thank you loyal readers! You got to the bottom of today's edition. Now if you haven't already done so, how about helping me promote this little blog with your friends by sending the general link, https://www.halbrown.org/ to your friends. I'd really appreciate it.
at October 09, 2022 No comments:
Email ThisBlogThis!Share to TwitterShare to FacebookShare to Pinterest
Labels: DOJ, Glenn Kirschner, Hal Brown
Older Posts Home
Subscribe to: Posts (Atom)