Salon's Chauncey DeVega once again tried to sound the alarm about just how dangerous Donald Trump is. Unfortunately Salon's alarm bell isn't nearly loud enough to wake democracy loving Americans  up so they do something to stop it. 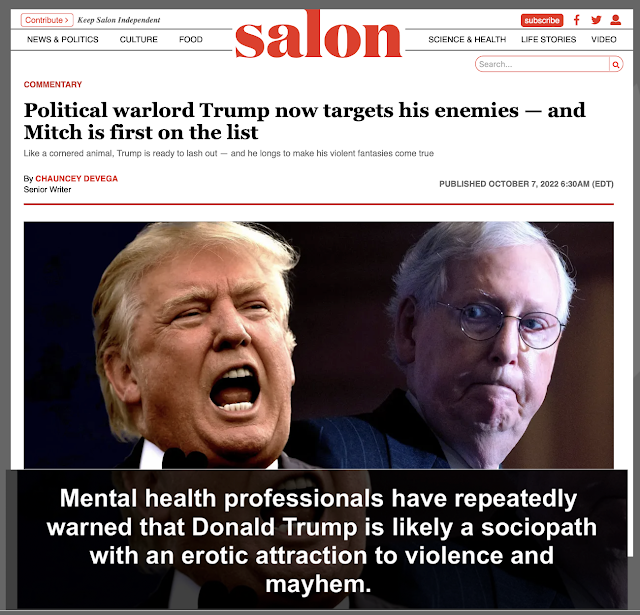 His message can be summarized in just the first two and the last paragraphs.

He has repeatedly shown that he has no regard for the rule of law, democracy, human rights or other restrictions on his behavior. He encourages his followers and allies to engage in acts of terrorism and other violence on his behalf. The most notable example came, of course, on Jan. 6, 2021. To this point, Trump has been limited by his cowardice. He prefers to have others engage in violence on his behalf instead of directly ordering such acts or participating in them himself.

This was the lead story in Salon this morning: 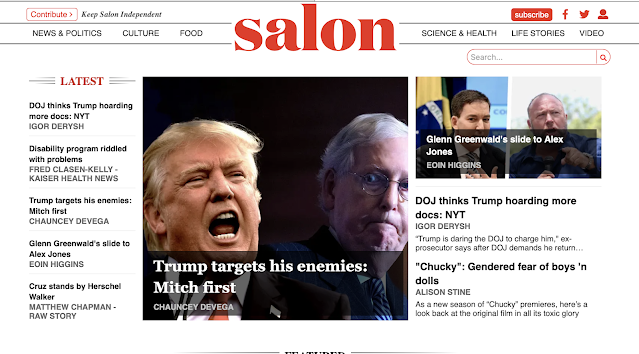 By way of comparison this was the lead on FoxNews' website this morning: 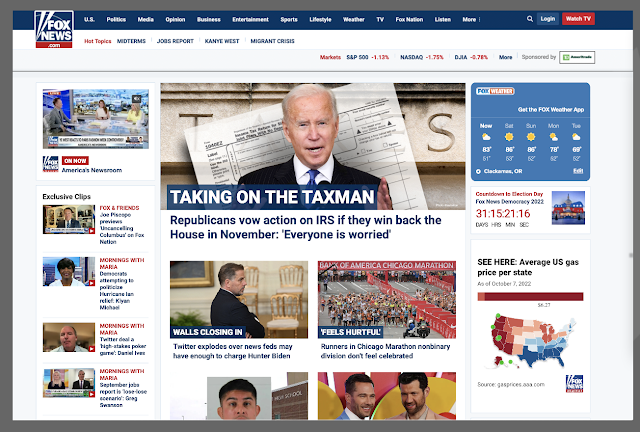 Alas, Salon's influence is less than nil when it comes to swaying opinion among the people whose eyes to the growing menace of Trumpian fascism in America couldn't be more tightly closed.
The story has been cross-published on RawStory (here) where it is trending and has, as of this writing, 167 comments.
I have written extensively about Trump being a dangerous malignant narcissist who revels in violent fantasies. In fact just the other day Trump's writing about Mitch McConnell having a "DEATH WISH" prompted me to write this story showing him as I think he fantasizes himself: 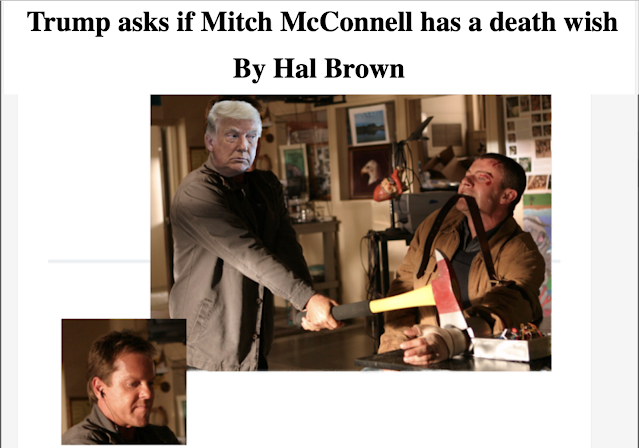 I am alway interested in what other mental health professionals have had to say about him, particularly the only one who knows him up close and personal. Chauncy DeVega quoted Mary Trump in his story.
I wanted to put her words into an illustration showing an angry Trump so I looked "angry Trump" up on DuckDuckGo and the Salon article came up first:
Here are the words I wanted to highly with the photo: 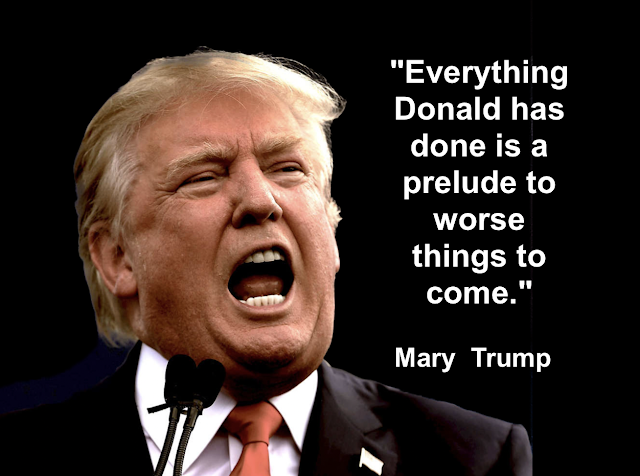 Aspiring warlord Donald Trump has told America and the world exactly what he and his movement intend to do. Unfortunately, the mainstream news media and other hope-peddlers have deluded themselves into thinking that it's all a misunderstanding or harmless hyperbole. We should take Trump at his word. On these issues, he does not prevaricate or tell lies. It will do no good to protest that you couldn't possibly have known. We all knew this was coming, and now it's here.

If the crisis to democracy isn't here right now it certainly is around the corner. Like Putin having amassed his troops for their so-called military exercise on the borders of Ukraine, Trump has readied his soldiers to do battle.  The signs are there. How big do they have to get? 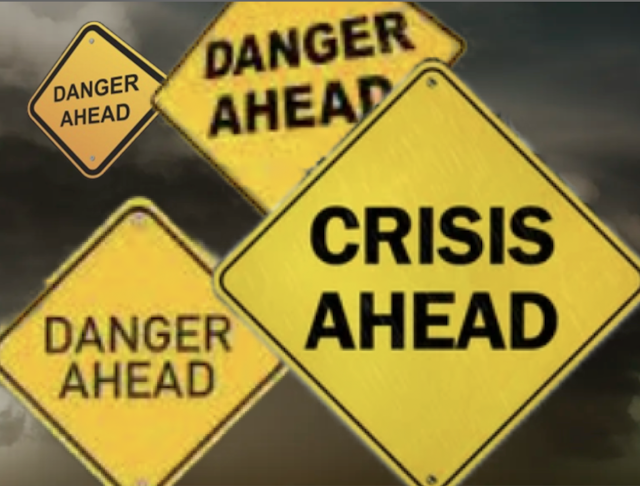 Whether it's the Boy Scout motto, Miguel de Cervantes, or the proverb "to be forewarned is to be forearmed" the message is the same... 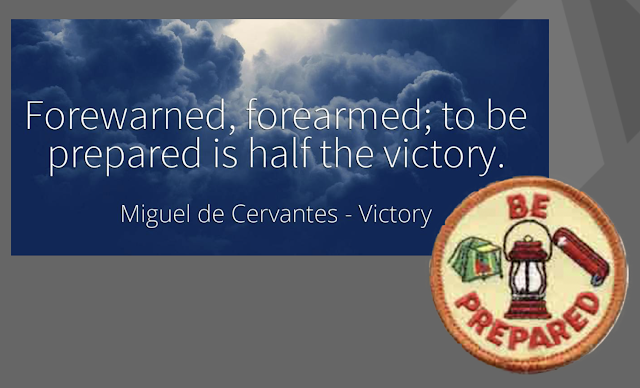 The proverb "to be forewarned is to be forearmed" should be applicable to Donald Trump.  For proverb and idiom mavens (from this website):

Many idioms that have no obvious source are often referred to, for no good reason, as 'old proverbs'. 'Forewarned is forearmed' has a genuine claim to be called such, as it dates from at least the end of the 16th century, and could be much earlier. The Latin saying 'praemonitus, praemunitus' loosely translates as 'forewarned is forearmed'. There's no evidence to show that the English proverb is merely a translation of the Latin though. The two sayings could easily have originated independently.

The meaning of the proverb is quite straightforward and literal - so long as it is understood that forearm is here the archaic verb meaning 'to arm in advance', rather than the noun forearm, that is, the part of the arm between the elbow and wrist. The saying is so straightforward in fact that it was originally simply 'forewarned, forearmed'. It is found in that form in Robert Greene's A Notable Discovery of Coosnage (a.k.a. The Art of Conny-catching), 1592:

Stories of the day that piqued my interest.

This article came out in February. It is now even more relevant than it was then:

The hypothetical look into what happens if Trump goes to prison

“I strongly supported Obama for President,” Elon Musk tweeted late last month, part of the spree of ideological comments accompanying his continuing takeover of Twitter, “but today’s Democratic Party has been hijacked by extremists.” Around the same time, he set the social-media platform ablaze by reposting a cartoon showing a stick figure comfortably on the center-left in 2008 redefined as a right-wing bigot by 2021 because the left-wing stick figure had raced way off to the left. Then this week, he expressed the same kind of thought in the abbreviated style for which the site is famous: “Twitter obv has a strong left wing bias.”

And now, at last, we have the news that he’s likely to allow Donald Trump to tweet freely once again.

All of these comments and promises align the country’s richest man with the rightward side in our culture war. But though I don’t know Musk — I’ve never interviewed him or hung out with him in any secret billionaire lair — I think I know enough about him, and I know enough Silicon Valley people like him, to suggest that neither his tweeted self-descriptions nor the criticisms being lobbed his way capture what’s distinctive about his position and worldview.

A term like “conservative” doesn’t fit the Tesla tycoon; even “libertarian,” while closer to the mark, associates Musk with a lot of ideas that I don’t think he particularly cares about. A better label comes from Virginia Postrel, in her 1998 book “The Future and Its Enemies”: Musk is what she calls a “dynamist,” meaning someone whose primary commitments are to exploration and discovery, someone who believes that the best society is one that’s always inventing, transforming, doing something new.

If you think this sounds uncontroversial, think again. First, the dynamist may not care where novelty and invention spring from: Unlike the purist libertarian, he might be indifferent to questions of public versus private spending, happy to embrace government help if that’s what it takes to get the new thing off the ground — and happy to take that help from regimes like Communist China no less than from our own. And he may be willing to risk much more than either the typical progressive or the typical conservative for the sake of innovation. Political principle, social stability and moral order are all potentially negotiable when discovery alone is your North Star.

Full disclosure: I have a Twitter account which I primarily use to try to promote stories I post on my blog. I fully expect Musk to allow Trump to resume tweeting. Aside from the negative of handing a victory of sorts to Trump, there are two positives. The lesser is that if he personally invested money in Truth Social that is gone since that platform will immediately go under. The greater positive is that every time he tweets something off the wall or outrageous (which will be most of the time) there will be numerous sarcastic, scathing, and snarky replies, some with contemptuous, mocking, and ridiculing illustrations which will be posted in articles about his tweet.

Related from BuzzFeed
We were on... 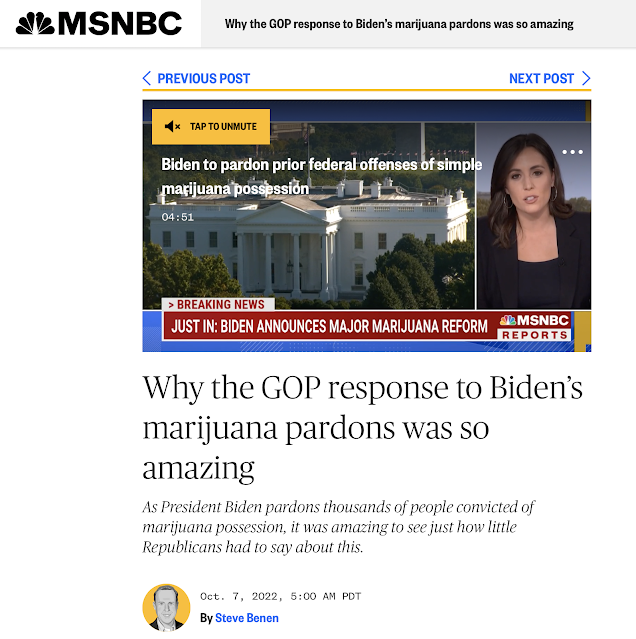 .... it was easy to imagine Republicans launching apoplectic broadsides in response to Biden’s sweeping and progressive pardons. The public would inevitably hear tired clichés about Democrats being “soft on crime” and failing to appreciate the seriousness of “gateway drugs.”

To be sure, it’d be an exaggeration to suggest that all Republicans sat on their hands. Sen. Tom Cotton of Arkansas, who routinely complains that not enough Americans are behind bars, made sure to register his disapproval yesterday. So did one of Fox News’ prime-time hosts.

But by any fair measure, the GOP apparently thought that the smart election season move yesterday would be to let Biden’s pardons go unmentioned.

My own opinion on this is that the timing coming prior to the November elections is smart. Biden has been characterized by the Right as being old and out of touch with the younger generations which these days seems to mean anyone not on Social Security. In the case of marijuana there are numerous potential voters left, right, and center who have used it in the past or who currently used it. Whether any of them are inclined to vote Republican might change their mind based on this issue alone is hard to say. However, it can't hurt and it may very well help some Democrats in close races. 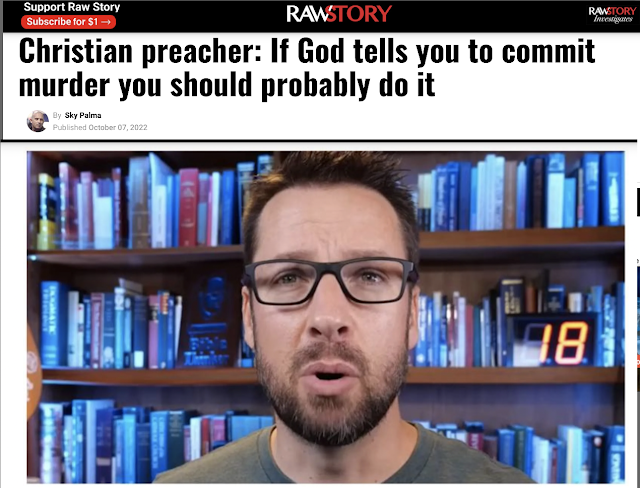 "...if God Himself actually tells you (to kill someone), and He’s like, 'Hey, I am the ultimate governor of all of life, and I have judicially said that person is going to die, and I’m telling you to do it,' yeah," Winger said. "Now, historically, as a Christian, do I expect this to happen? Not really.

"So, as a Christian, in principle, if God tells you to kill someone, yes, you should. It’s God."

"But in practical reality, I really don’t expect this to happen," he continued. "Not that there could never be an exception, but if anybody comes up to me, and says, 'God told me to kill so-and-so,' my default is to think they’re probably wrong, because there’s a lot more weirdos out there than there are people that God is telling to do something like that. There’s my answer."

Basically he's saying that it is "weirdos" who hear God telling them to kill people. In fact, anybody who actually hears voices whether they believe they come from God or a teapot is mentally ill. It doesn't matter whether the voices tell them to adhere to Christian values or run naked in the street, they are still auditory hallucinations.

This is bad news for the FBI and in particular Trump appointee FBI Director Wray: 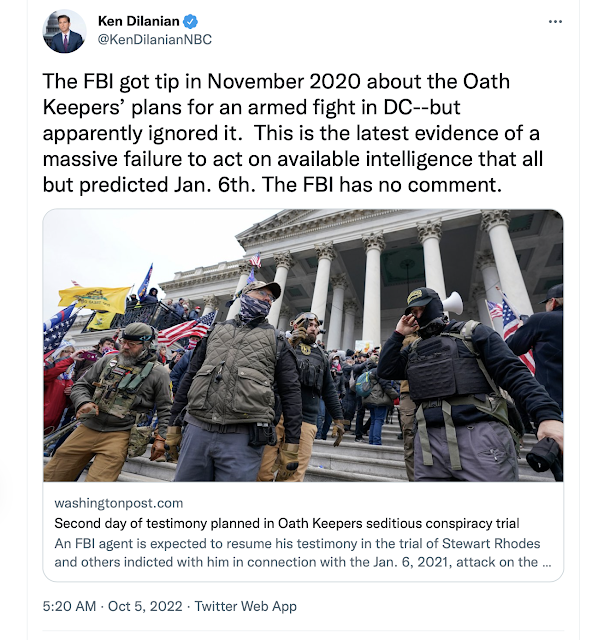 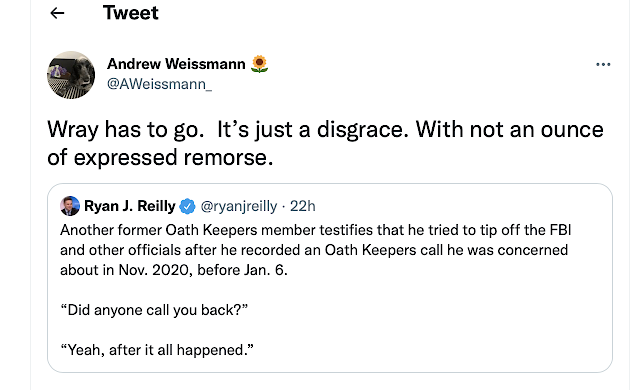 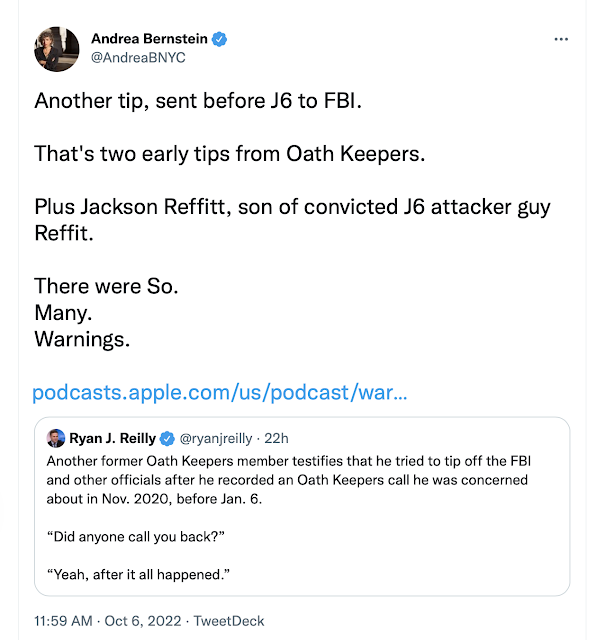 Read article about this in RawStory. It isn't just Director Gray that is under fire. Attorney General Garland is also being harshly criticized for the way is, or isn't, handling the documents investigation.
You probably don't read The Bulwark. If you don't look at from time to time you miss stories like this: 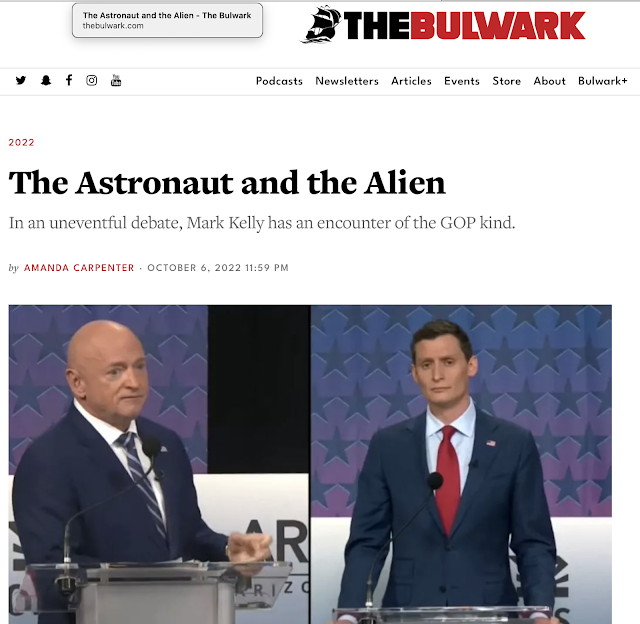 Masters was asked, point blank, if he thought the 2020 election was “stolen” or “rigged—in any way, shape, or form—enough to keep Donald Trump out of the White House,” and Masters replied:

Trump is 'daring the DOJ to come and get him' over more missing documents: NYT's Haberman...

She said ""The Trump team is basically daring the DOJ, once again, to come get him and we'll see what the DOJ does."
I am very skeptical this comes from Trump's team of lawyers telling him what they know is in his best interests. It may be another "team" of sycophants. If he hears it from his lawyers they are telling him what he wants to hear. I think this comes form Trump and is absolutely predictable because he is a malignant narcissist with seriously impaired judgment. He revels in the thought of a confrontation where he, in his grandiose delusional state, which he thinks he will win. He's bought into his own propaganda, into the iconography produced by artists hawking their wares to his cult. 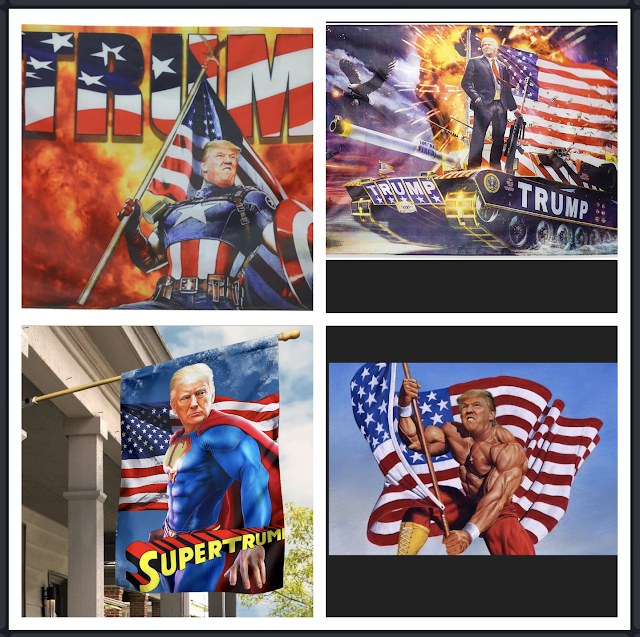 Here's a name from the past that I bet you forgot about:

Harvey Weinstein’s Second Trial For Rape And Sexual Assault Charges Begins Next Week. Here’s What You Need To Know.

After being convicted of sexually assaulting two women in New York, the former movie producer is facing criminal charges related to five other women in Los Angeles. 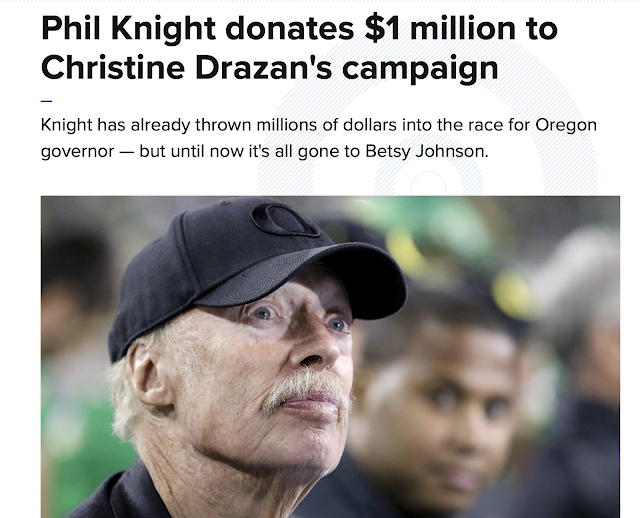