Santos leads the GOP in eliciting Schadenfreude, no doubt more to come

Santos leads the GOP in eliciting Schadenfreude, no doubt more to come
By Hal Brown, MSW 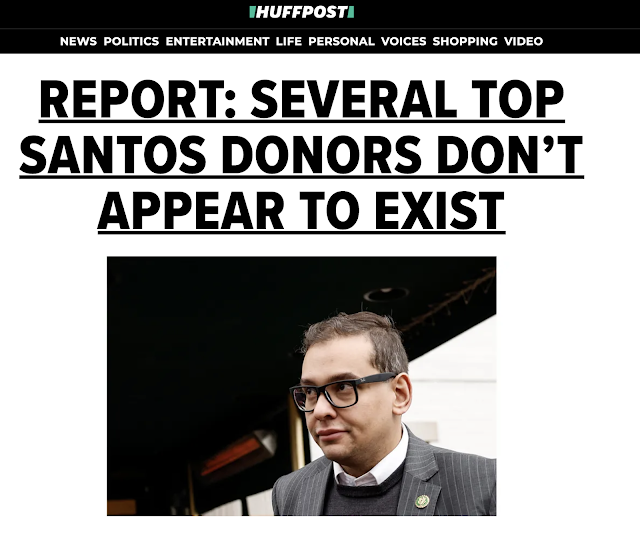 There's no word in English, or any other language for that matter, for the German word Schadenfreude. Following the German convention it is often capitalized, which is good since it means it doesn't need further emphasis here, although I am tempted to put it in bold.

I experienced a delightful feeling of Schadenfreude when I read this article: 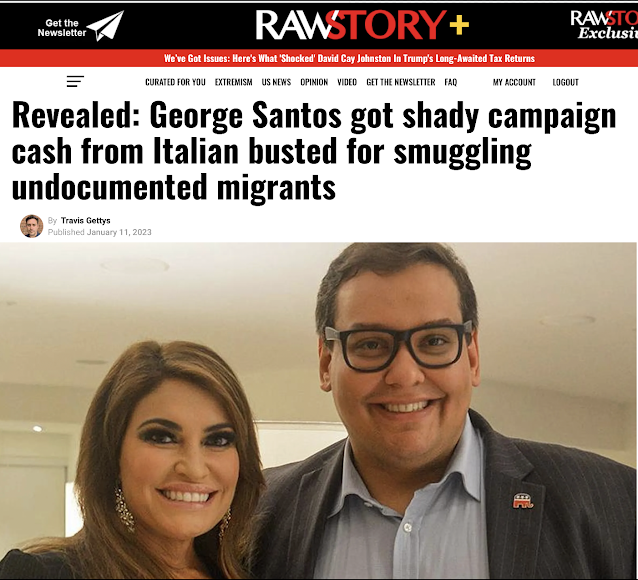 As far as I'm concerned, and I expect other Democrats too, the longer George Santos stays in the House the better. I am sure that many or most of the House Republicans wish he would just go away as quickly and quietly as possible. They may be able to sideline him but I have no doubt that he will make himself accessible to reporters eager to cover his every utterance. "If it bleeds, it leads" certainly applies to Santos, and he's hemorrhaging. 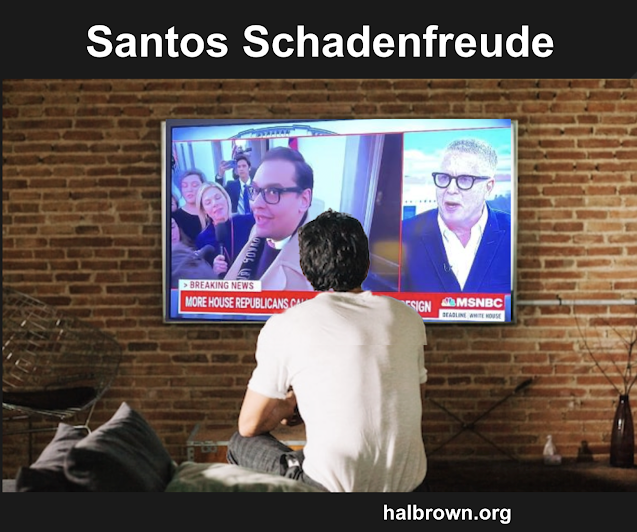 I am also watching reporters catching House Republicans being asked about Santos and enjoying watching them squirm as they deflect the questions.
Below top center, Steve Scalise: Like Icarus, he is flying too close to the Sun There's a hard-to-describe pleasure in experiencing Schadenfreude washing over you without a smidgen of guilt. If you feel any guilt, as a therapist myself,

I can offer only two words for you. As Bob Newhart's Dr. Hartley shouted

to a patient in a classic (for many therapists) clip: 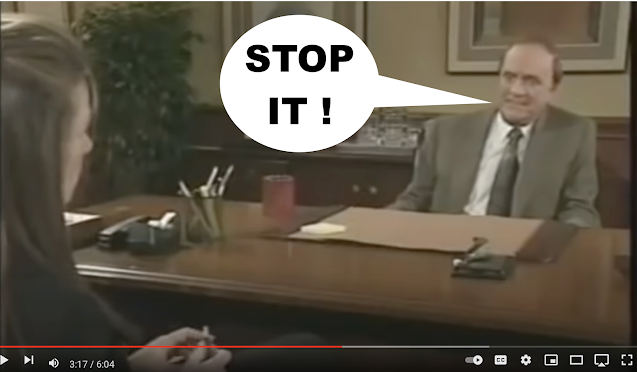 I don't think it is wishful thinking to be convinced that Santos will not be the first Schadenfreude inducer as the House Republicans in the Freedom Caucus, more appropriately called the Free-to-Be-Crazy Caucus, grind the necessary business of the House to a screeching halt as they go full-steam ahead on their vengeance train.
I don't wish death or literal injury on anyone but I am reminded of incidents like this when a train went much faster than the tracks would support. 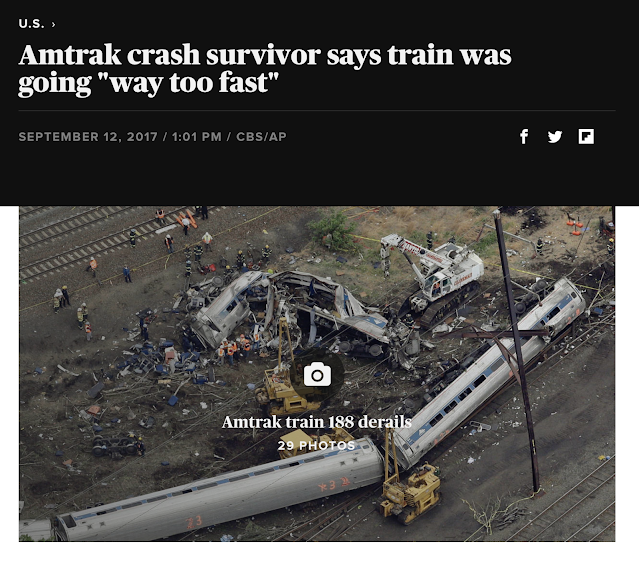 The more-or-less not mentally unbalanced GOP House members like Jim Jordan, for all his grimacing, screaming, and screeching may have stories like this written about him... 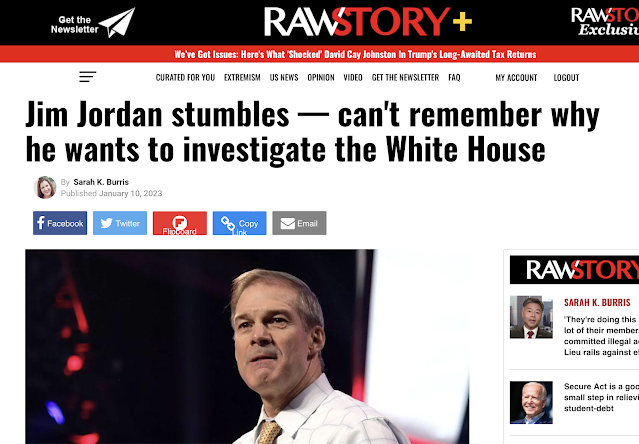 compared to the likes of Marjorie Taylor Greene, Lauren Boebert. and Matt Gaetz he's an exemplar of mental stability.
The Schadenfreude with Jordan probably won't come with his swatting at hallucinatory flying pigs during a televised hearing which he chairs. While I'd like to see him turn into a quivering mass of incoherence when one of the Democrats nails him I doubt it will happen.
What I think will occur over time is that these hearings and investigations, especially the ones on the so-called weaponization of the federal government (read why this is the most dangerous) and Hunter Biden turn into Snipe hunts. I call it Schadenfreude delayed. When it happens... 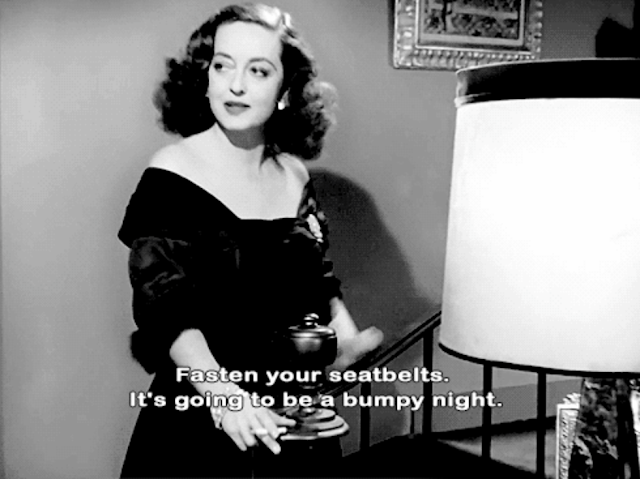 .... for Republicans, and not in a good way... it will be a nightmare filled sleep they can't wake up from.
Updates: I really hoped George Santos would stay in the House for as long as possible, his being there causing rizik tsores (Yiddish for huge suffering) for Republicans. Now it looks like his days may be numbered. The Nassau County GOP called on him to resign. This makes it harder for House GOP to dodge the issue. 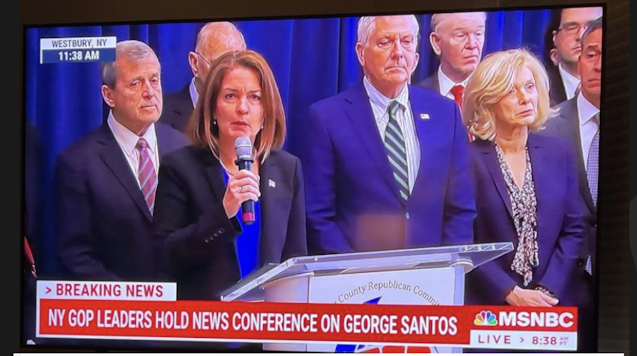 Here he is refusing to resign: 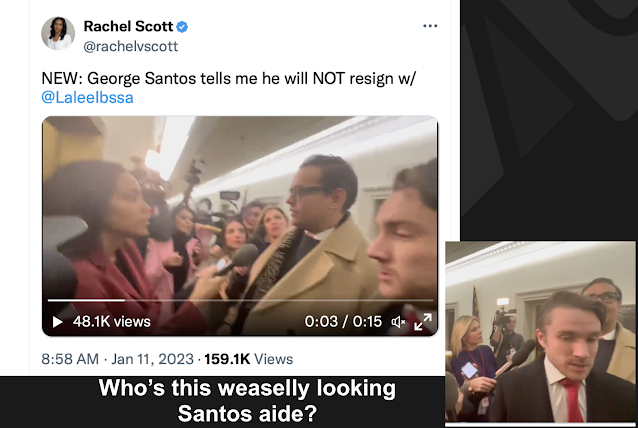 I wonder who the aide by his side, who gets in the elevator with him, is.

Worst case Senate and House go Gop. but assume it is just the House. 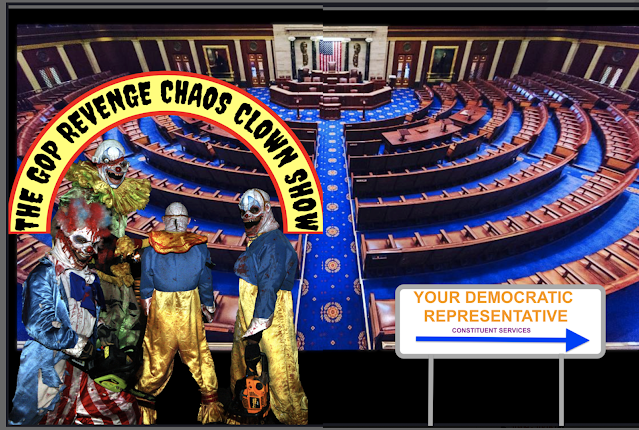 Worst case Senate and House go GOP, but let's assume it is just the House. Here's what I think we should expect.

If the new House Speaker, who (hate to remind you) would be next in line for the presidency after Vice President Harris, is Kevin McCarthy as seems likely, can't control his caucus expect two years of gridlock as far as legislation and a revenge chaos clown show.

There will be a clamor among the Trumpainiacs like Marjorie Taylor Greene and Matt Goetz to impeach Biden. They may have lost gun-totting Lauren Boebert who was armed and demented. (MSNBC has yet to call the election.) 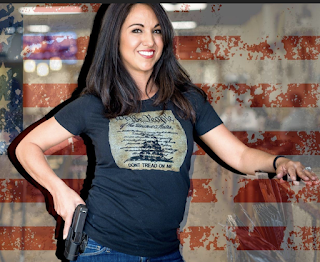 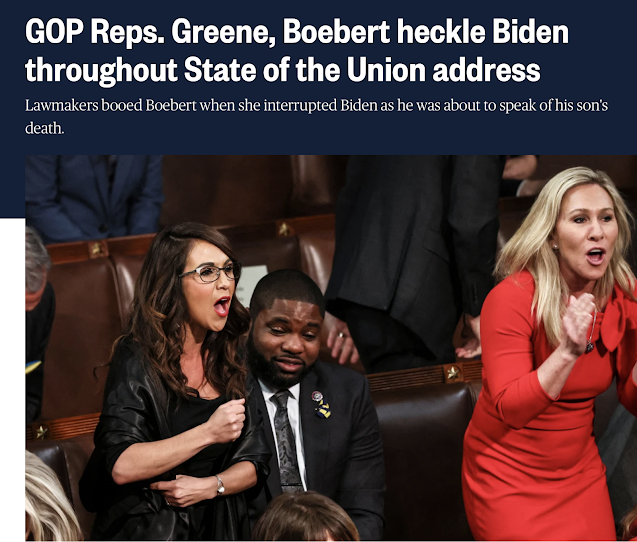 Most of the lunacy won't be on the floor of the House  itself. It will occur in committee hearing rooms where we will see, unless Kevin McCarthy can control the maniacs, efforts to impeach President Biden, Vice President Harris, and Secretary of Homeland SecurityAlejandro Mayorkas. The only cabinet secretary to ever be impeached was under President Ulysses S. Grant. This was William W. Belknap. He was impeached on March 2, 1876, for his role in the trader post scandal.

Of course there will be a major committee  investigation into Hunter Biden although even Trump pretty much gave up trying to demonize him since attacks against him didn't turn out to be a rally crowd pleaser, and they will cheer him for just about anyone he attacks..

In a day or two when the final results are in, unless the Democrats hold onto control of the house in which case expect a plethora of lawsuits from losing Republicans all or most of which would be denied in court. It is possible a judge could stay the results of a crucial election for short period of time.

I wouldn't be surprised if Democrats boycott all of these revenge impeachments hearings. The results will all be predetermined and nothing but a chance for the GOP loonies to showboat for Fox News which I doubt would bother giving them extensive live coverage if only because the only breaks for advertisers are during recesses. That is unless the chair decides to cut a deal with Fox and break for commercials every 10 minutes.

Once the House impeaches, as we all have learned, the determination as to whether or not to remove someone from office goes to the Senate for trial. Since a supermajority would be needed for conviction even if the GOP had a majority of a few votes there's no way any of these people would be convicted so I can't see the Democrats presenting an extensive defense, or even a defense at all.

If they did put together a defense team composed only of members of The Squad I thought this would stick it to the Republicans. While having AOC in the hallowed hall addressing them would really burn their butts, but she's isn't an attorney. The Squad member who is a lawyer is Rashida Tlaib who ironically went to Thomas Cooley School of Law, which is the same law school Michael Cohen went to. 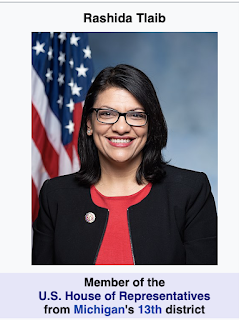 No matter who controls the Senate, if the GOP controls the House and it becomes useless for working on a legislative agenda this would provide plenty of time for Democrats to muster their resources to assure that all of them get reelected.

They can focus on constituent services, fund raising, planning strategy for the next election, and in districts where they might face major opposition making sure voters understand why they should be reelected.

A few representatives from safe districts where another Democrat would easily win if they didn't run and who would make good presidential, vice presidential, governor, or Senate candidates down the road could also work to elevate their national profiles.

The Democrats have a deep bench of such candidates  but some have negatives that might make a national run difficult, in part because Trump demonized them.  Anyone on the January 6th Committee would probably be ruled out. Others who weren't on the J6 Committee. There are lots to chose from. Katie Porter comes to mind as a standout. She could turn out to be a formidable candidate for national office. 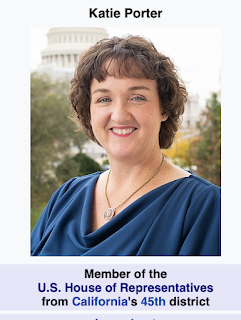