As I finished writing this and was watching MSNBC reporting on what Musk was doing on Twitter Mastodon was mentioned at least 10 times. I think it was Jonathan Lemire on MSNBC this morning who said you can take any story about how Elon Musk or Donald Trump, through aspects of their personality, thrive on creating chaos and substitute one name for the other and the story would still be true.

Yesterday I wrote about Trump and Musk here:

I wrote about how the media normalizes megalomania and other psychopathology here so I won't cover the same ground again.

I think that over the past week we have both Musk and Trump to thank for making things better in a sense since they, for want of a better metaphor, have gone from being a "mere" train wrecks to being train wrecks where the toxic and flammable tank cars exploded engulfing everything around them in flames and deadly chemicals.
With the World Cup final game approaching I wondered it it could end in a tie. I looked it up (here)

World Cup games can no longer end in a tie now that the tournament has advanced to the Round of 16. Draws are only permitted in the group stage where there is a point system used to determine who advances out of the group. If a game ends in a tie at the end of regulation time, the match goes into extra time with two 15 minute periods. There is no golden goal so teams are guaranteed to play both periods for a total of 30 minutes plus stoppage time. Here’s how FIFA explains the “overtime” rules.

Between Musk with his making the news for kicking journalists off Twitter and Trump and his card con it seems like they are in the extra time part of the World Cup for Chaos game.
Musk gets a goal, Trump gets a goal, Musk, not to be outplayed, gets a goal, Trump comes up with an insane kick and scores, and it goes on and on.
I tried to figure out (here) what would happen if a World Cup final game remained tied indefinitely. From all I could tell it would continue until one team broke the tie.
This could mean that a game would end when enough players died. In a one on one game Musk has the edge because he's younger and presumably likely to live longer than Trump. Not to wear out the metaphor, but if US marshals came to arrest Trump I think he would forfeit.
Addendum:
Here's a recent toot I made on Mastodon: 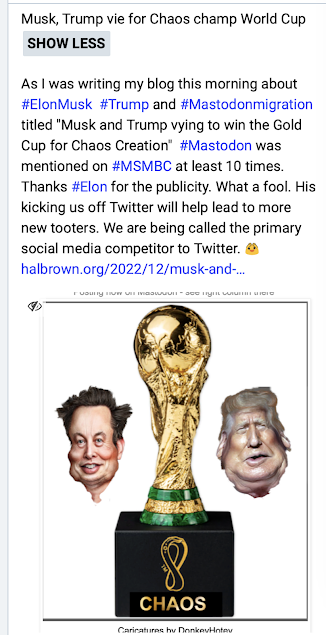