Pot and psilocybin mushrooms in Oregon

Two slightly related stories caught my eye on the website of a local Portland area TV station. Once I started writing about them my mind wandered far afield to cover other subjects. 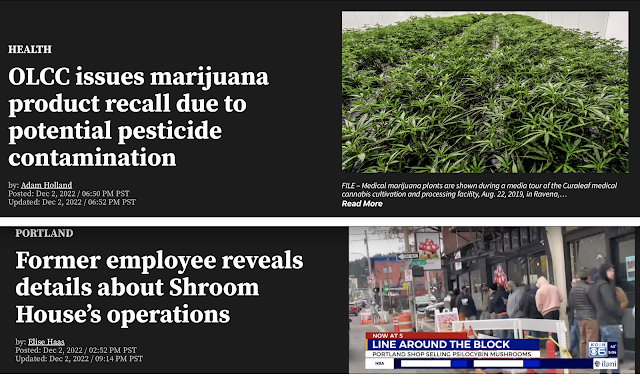 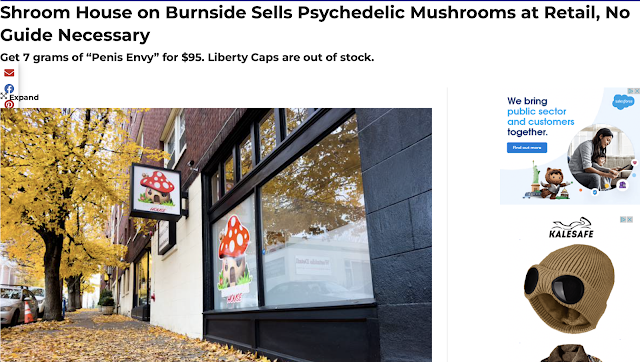 The use of psilocybin mushrooms will be legal in Oregon next year but apparently they are available now - the article concludes:

“I’ve never even seen this stuff before. So I’m trying,” said Scott Yon, a customer at Shroom House. “I understand it may not be legally up yet, but in Portland, it doesn’t seem like people get arrested for anything.”

Even though the Oregon Health Authority and police say this is not legal, the long lines seen outside the store show the simple economics of supply and demand.

I've considered trying psilocybin mushrooms once the clinics, where someone trained to help you navigate the experience will help you, to see what unexplored part of my mind was opened to my consciousness.
Since the psychedelic era there were two groups (not mutually exclusive) of people who used LSD and similar substances. Some belonged to the "turn on, tune in, drop out" group, a term popularized by Timothy Leary, and the others wanted to discover more about themselves. Some eventually followers of Richard Alpert who was Leary's partner, who became Baba Ram Das, and led a movement aimed at spiritual enlightenment.
When I was in college during the height of hippie and counterculture psychedelic times (1963-1967) I knew lots of people in the former group. There was a people's park I often walked through at Michigan State where students camped out and got stoned. Reference. 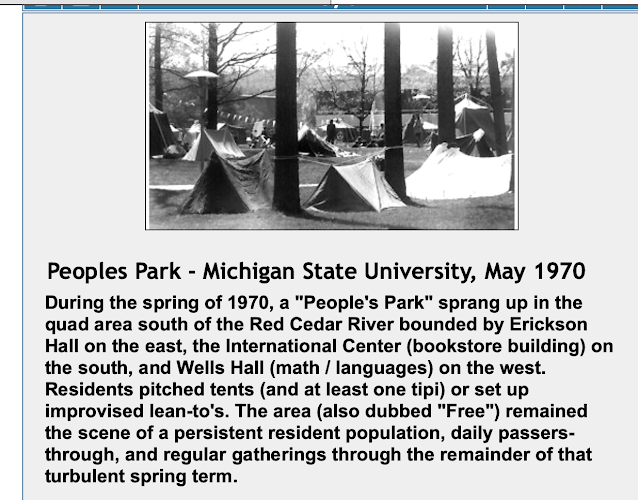 I have concluded that I don't want to take the risk of using psilocybin. I am leery of any substance that leads me to be out of control of where my mind goes. Once a psychoactive drug is in your brain there's no "off" switch. You have to ride out the experience.
I like to be able to embark on unstructured  mental journeys to see where my unconscious leads me, but I want to be able to exert some conscious control.
I have friends who meditate using one or another technique. Almost everyday I spend time just letting my mind wander freely. I am not sure whether this would be considered mediation but I like the experience.
Since my mid-teens I paid a lot attention to my dreams, what Freud called "the royal road to the unconscious" and in fact read two paperback books by Freud when I was in my teens. One was his "Introduction of Psychoanalysis" and the other was "The Interpretation of Dreams." Karl Jung agreed and wrote that “the dream is a little hidden door in the innermost and most secret recesses of the psyche.”
These readings led me to understand that there was much more to people, including myself, than they were aware of. This understanding always informed the kind of therapy I practiced for 40 years. I feel the crucial way therapy helps is the relationship between client and therapist, but that there are times with certain clients when it is helpful to facilitate insight into why they are distressed.
The following article should be both cautionary and reassuring to those using cannabis, which is legal for recreational use in Oregon:

While I've tried high in CBD cannabis edibles to help sleep through the night I find that I don't like the effect that even the amount of THC, usually about a third, has on me. I makes my mind race and causes near hallucinatory images. I don't use any cannabis at all now, but I live in a senior community where many friends and acquaintances use it. If you visit any of the  560 + Oregon pot stores you will see customers ranging in age from 21 to 91 or older.  You will see hipsters looking for a better high to elders with bad hips relying on budmasters, the pot store version of your pharmacist, suggest varieties to help with different ailments. 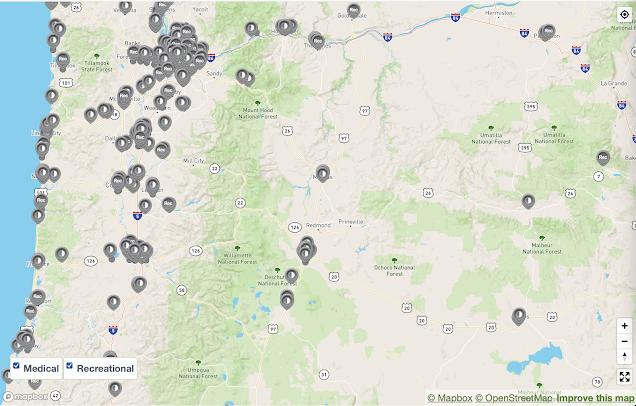 It should be reassuring to cannabis users that the state is testing the products, but it seems to be common sense that anyone trying a new variety realize that the testing takes time to find contaminants so they need to make changes with caution.
...
at December 03, 2022 2 comments:
Email ThisBlogThis!Share to TwitterShare to FacebookShare to Pinterest
Labels: cannabis, dreams, Freud, Hal Brown, marijuana, mushrooms, Oregon, pot, psilocybin, Psychology, psychotherapy
Older Posts Home
Subscribe to: Posts (Atom)