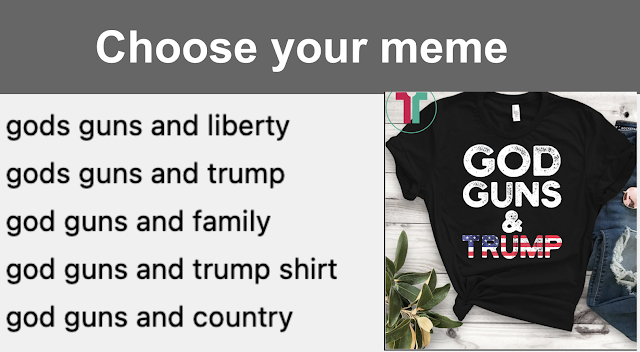 If you do a Google Image search for God, guns, and Trump this is what you see: 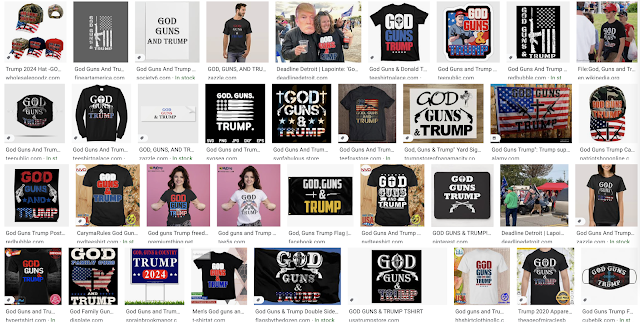 This story leaped out at me through the pain of a waiting for the ibuprofen to kick in after dental surgery:

"On the eve of the first game, which the Knights won, Kennedy was in Milwaukee being presented with an engraved .22-caliber rifle at an American Legion convention.'

Skip this section if you have no interest in guns.

I couldn't find a report whether the rifle was the kind usually used for target shooting and hunting small game or a tricked out version made to look and function like an assault rifle only with smaller and less lethal anti-person bullets. (Click images to enlarge) 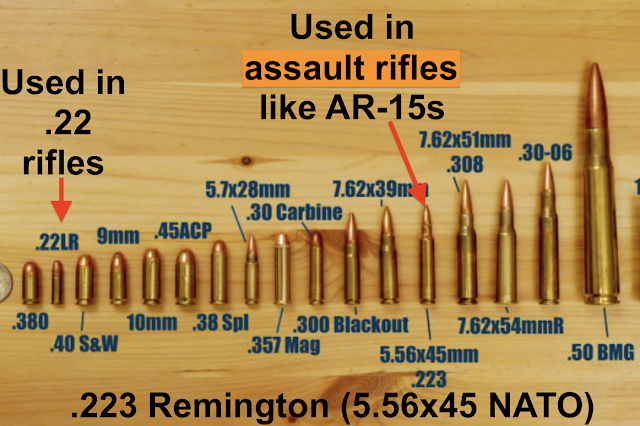 The other some friend and I were discussing the cache of silver coins one had stored in a safe that her late husband collected. She said that they might come in useful for trading should society fall totally apart. I said in fact the better item to hoard would be .22 caliber bullets since they are cheap ($40 for 500). They would be used for hunting small game for food rather than against people (unless it was a last resort). Lord knows, the country is awash in weapons designed just to kill people efficiently. 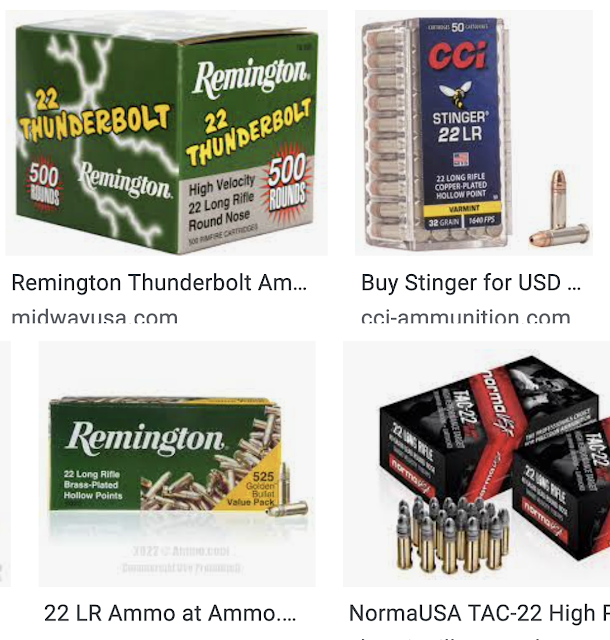 Back to the article, and the gun quote above...

It is is buried in this article: 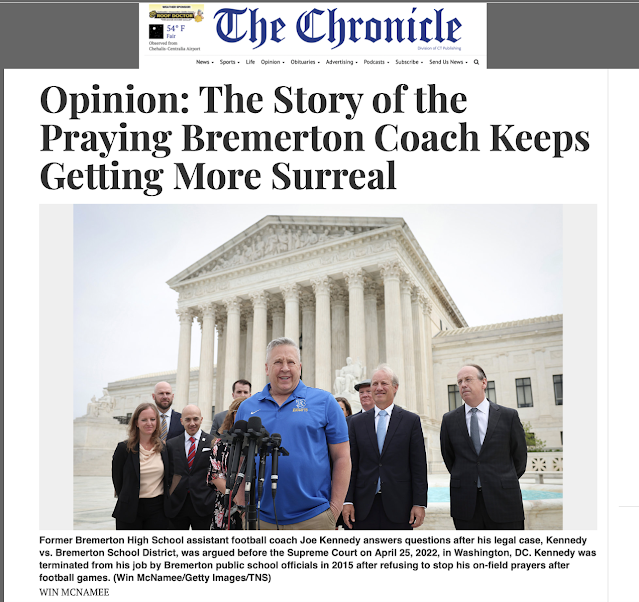 Here's yet another example of the Supreme Court predetermining a politically decision and ignoring arguments which would undermine the correctness of their ruling. An excerpt from the article:

The district's lawyers tried to correct the record, to no avail.

"You can't sue them for failing to rehire you if you didn't apply," one lawyer, Mercer Island's Michael Tierney, argued during a lower court session. "The District didn't get an application from him, had four positions to fill and filled them with people who had applied. It didn't fail to rehire him."

The Supreme Court simply ignored this inconvenient fact — along with a host of others. At one point during oral arguments, as a different school district attorney was saying the narrative that had been spun didn't fit with the facts — that the coach's prayers were neither silent nor solitary, nor was he fired — Justice Samuel Alito interrupted him, saying "I know that you want to make this very complicated."

Alito persisted in asking about the coach being fired — six times he said it, to the point that the lawyer finally corrected him. Which is a touchy thing to do with a Supreme Court justice.

The article concludes with these wise word from Justice Elana Kagan showering Chief Justice John Roberts for his defense of the legitimacy of the court.

This past week the Supreme Court justices were hand-wringing in public about why so many people seem to dislike them. The way Chief Justice John Roberts phrased it is that the public is questioning the "legitimacy of the court." He said people shouldn't base their views on whether the court's decisions are popular.

That's fair enough. The rule of law isn't supposed to bend with the winds. But Justice Elena Kagan got much closer to the mark.

"I think judges ... undermine their legitimacy when they don't act so much like courts," she pointedly said this past week. "And when they don't do things that are recognizably law, and when they instead stray into places where it looks like they're an extension of the political process, or where they're imposing their own personal preferences."

Your honors, I submit for the record, the Coach Kennedy case. Exhibit A.

As I look for references to God and guns I found this relevant article from The Trace:

As Midterms Loom, Right Wingers Are Revving Up the Faithful with Talk of Religion and Guns

The Trace which published this article describes itself as the only newsroom devoted to covering web violence.
Michael Voris, the president and founder of St. Michael’s media, Church Militant’s mother company, who moderated the convention described in the article reported on in this story. Here are some of his words:

Voris also hosts a web talk show in which he presents monologues for viewers. In one episode about guns, Voris begins by claiming that Democrats misrepresent religion and gender, and lack a “belief in God,” then transitions to a four-minute rant about how “Democrats and Marxist socialists” are eager to take guns away.

“Whoever has the guns, rules the country,” Voris says. “The forces of the so-called Great Reset have gathered, conspired, and laid out their plan.” The Great Reset was the World Economic Forum’s 2020 response to the global economic hardship brought on by the COVID-19 pandemic. It quickly morphed into a viral conspiracy theory that held that “global elites” would use the health crisis to destroy American influence and wealth.

At the end of his message, Voris asserts: “The bad guys hate God, and they hate you having guns for the exact same reason. It’s all about destroying your human dignity.”

But Empsall vehemently rejects that guns and Christianity are tied. “America is awash in guns and individualism, and that’s certainly not in the Bible or the gospel,” he said. “They started with the guns and they brought in the religion, not the other way around.” 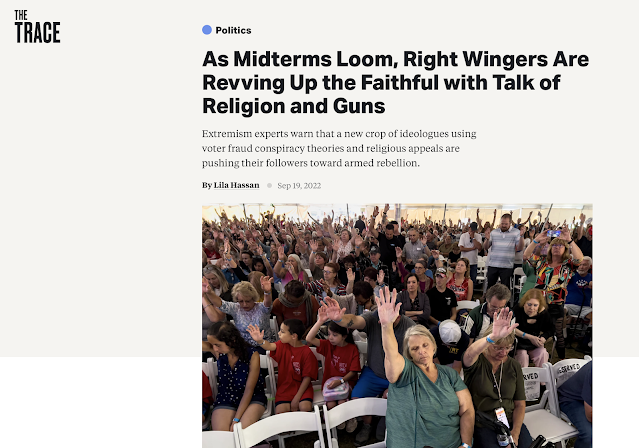 I am not an anti-gun liberal snowflake. While I consider hunting as a sport which people justify because they eat the game they shoot I still consider it a needless taking of life where you personally watch the animal die rather than the abstract denial of a typical omnivore who enjoys a good filet mignon. I just can't envision myself having a deer in might sights and deciding to end its life.
I can also see target shooting and working to develop in this as a benign activity that people enjoy, but I draw the line at non-soldiers practicing shooting so they hone their skill at killing people
People like the brothers Trump shooting large game sheerly for the pleasure and watching a tiger, water buffalo, or other majestic creature die, and then posing happily with photos of their kills, I consider to be an exercise of blood lust arising out of psychopathology.
In the interest of self-discloure: I have also carried a handgun as a part of my role as a reserve police officer for 20 years and believe in using firearms for true self-defense. In fact it was writing about this that got me permanently banned from posting on Daily Kos. I  didn't save that article so since they took it off-line I re-created it here with a justification for writing it.
The twisted belief of these evangelicals and violence threatening Trump supporters is that in their warped perspective they are convinced that if they use firearms it will be in defense of some perverted idea of liberty.