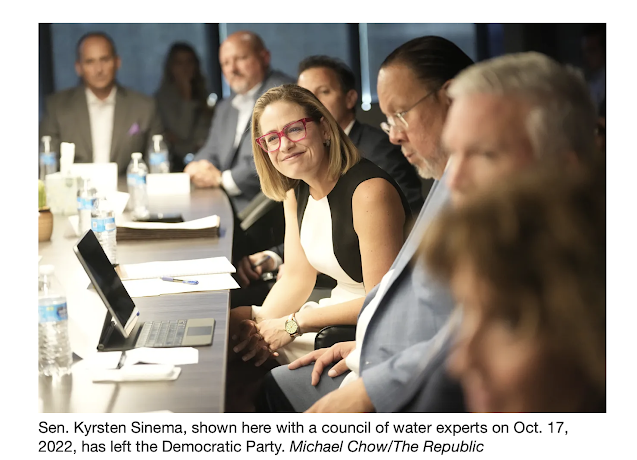 I posted this on Mastodon: 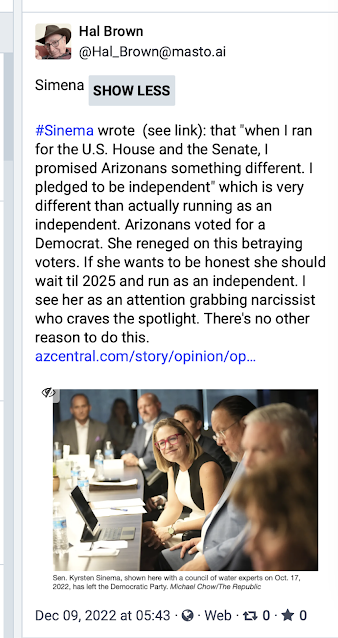 Sinema wrote (see link): that "when I ran for the U.S. House and the Senate, I promised Arizonans something different. I pledged to be independent" which is very different than actually running as an independent. Arizonans voted for a Democrat. She reneged on this betraying voters. If she wants to be honest she should wait til 2025 and run as an independent. I see her as an attention grabbing narcissist who craves the spotlight. There's no other reason to do this.

Then I looked at RawStory and read this article by Travis Gettys: 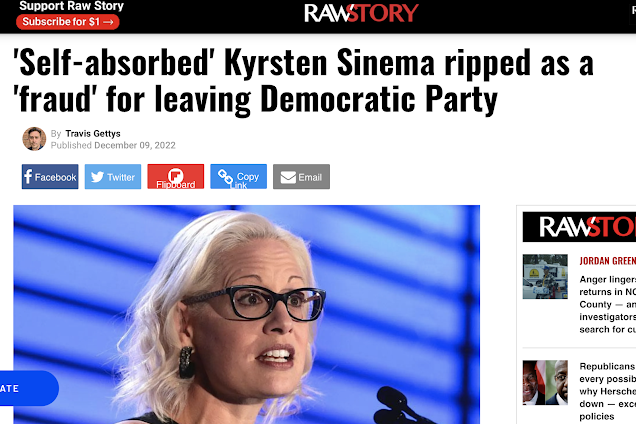 Living as I do in Oregon, I lived through a nail-biting campaign season where someone just as attention seeking as Sinema, Betsy Johnson, a former Democrat, ran as an independent in the governors race and nearly led to far-right candidate Christine Drazen beating the winner, progressive Democrat Tina Kotek.

Sinema cheated Arizona voters who voted for a candidate who was up front about being what most would consider to be moderate to conservative Democrat (being generally socially liberal but fiscally moderate-to-conservative.[119][120][121]

However, she ran as a Democrat, not an independent.

Once in the Senate, from that I can tell from Wikipedia, she began as a back-bencher without a national profile until she began her naysaying.

Consider that her committee assignments didn't lead to her getting national exposure:

This Time article illustrates how she discovered her path to being a political household name: 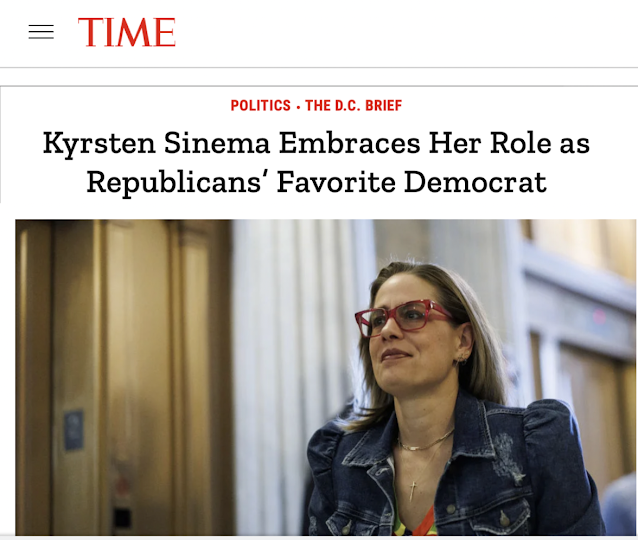 Sinema made the pilgrimage on Monday to Kentucky to speak at the McConnell Center at the University of Louisville, a familiar stop for Senate institutionalists to pay a polite nod to the chamber’s top Republican and master of its byzantine nature. And, once at McConnell’s alma mater, she was treated to a Brink’s truck of praise for her unwillingness to fall in line with the rest of her Democratic Party. It wasn’t entirely magnanimous.

“She is, today, what we have too few of in the Democratic Party: a genuine moderate and a dealmaker,” McConnell said in his introduction, which also described her as “the most effective first-term senator I’ve seen.”If obstruction is a proxy for efficacy, then there’s little room for argument. Sinema helped to tank changes to Senate rules that would have allowed for a simple-majority to advance certain measures that her party considered priorities. In turn, preserving the Senate tradition of lawmakers killing legislation by simply threatening to filibuster it derailed a voting rights proposal. She also wasn’t on board for President Joe Biden’s infrastructure packages or an effort by the progressive wing of her party to boost the minimum wage to $15 an hour.

In turn, she got a hero’s welcome from a host who similarly enjoys thwarting Democrats’ best-laid plans, including a Supreme Court nominee in 2016.

I put her in the same category as other narcissists whose core political beliefs are suspect.  This includes Betsy Johnson, who never became nationally well known, and others like Kari Lake who did. Nobody knows for certain what the likes of them and of Jim Jordan, Paul Ryan, and Matt Gaetz really believe. They would be obscure members of Congress if they didn't take outrageous positions.

Notable narcissistic headline grabbing political exceptions are Marjorie Taylor Greene and Lauren Boebert who may have delusional disorders and could believe the attention grabbing lunacy they spout.

It is important to note that there are two independents in the Senate who Sinema has now joined who are part of the Democratic Party caucus, Bernie Sanders and Angus King. Both of them ran as independents.

This article speculates on the real reason Sinema chose to become an Independent: 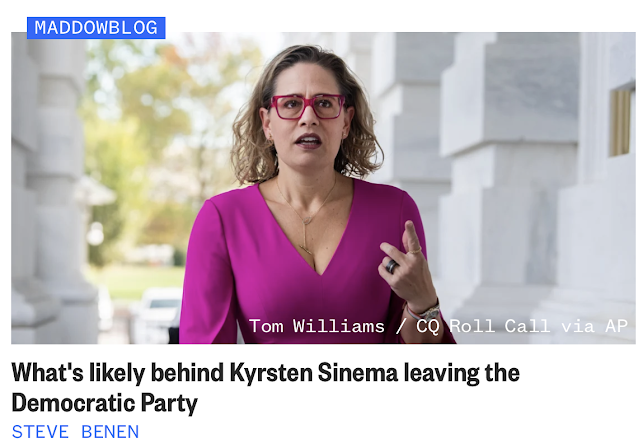 To put it mildly, Sinema has not endeared herself to Democrats in her home state. Earlier this year, Data For Progress polled Arizona Democrats and found the incumbent senator trailing Gallego in a hypothetical primary match-up, 74% to 16%. That’s not a typo: She actually trailed the popular congressman by 58 points.

With this in mind, Sinema very likely realized that she had a decision to make: She could (a) retire; (b) take steps to repair the relationship with the Democratic voters who elected her in the first place; or (c) take her chances as an independent.

As a tactical matter, settling on the third option makes sense. Sinema was very likely to lose a Democratic primary, her voting record made a run as a Republican implausible, and she didn’t want to walk away from Capitol Hill altogether. Becoming an independent is a sensible strategy.

Indeed, it’s not unrealistic to think it might very well save her career. 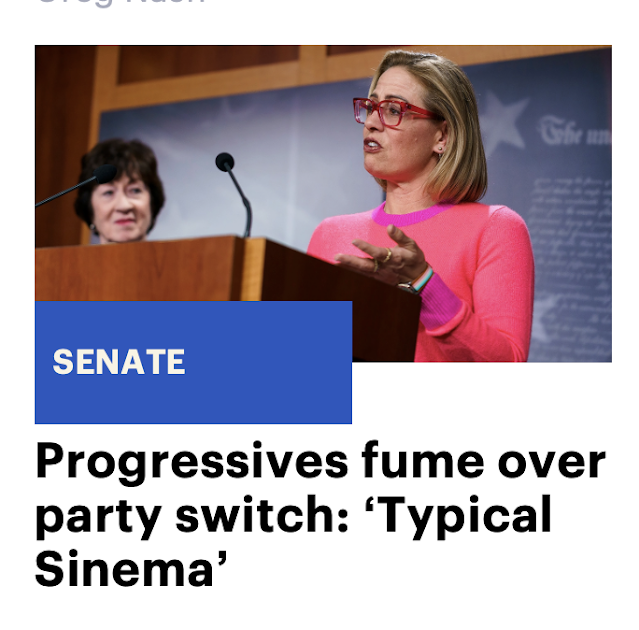 If you're new to the blog, the archives in the right column will take you back through the period when I began posting political stories and before that when the blog only had photo essays documenting road trips around Portland and Washington with photos of both scenery and unusual restaurants. Remember you can click the small images to enlarge them. These are from 2021.
I started the blog in 2012, here.