I was wrong, no chance Trump will testify live, but perhaps J6 Committee thought he might

I spent some time speculating in these blog posts (below) that Trump might decide he wanted to outsmart the January 6th Committee and run circles around them when he testified and have a huge national audience while he did this. Of course this was a grandiose delusion. 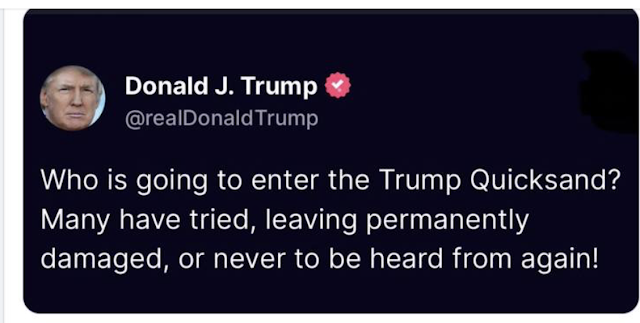 First it was reported that Liz Cheney said that there was no chance he'll even have an opportunity to try this.

"He’s not going to turn this into a circus," the House committee’s vice chair, Rep. Liz Cheney, said of the former president's subpoena.
Then this came out:

"The committee treats this matter with great seriousness," she said. "We are going to proceed in terms of the questioning of the former president under oath. It may take multiple days. And it will be done with a level of rigor and discipline and seriousness that it deserves."

The panel, Cheney continued, will not allow the former president to turn his testimony into "his first debate against Joe Biden and the circus and the food fight that that became."

“This is far too serious set of issues. And we’ve made clear exactly what his obligations are. And we are proceeding with, with that set out,” she added.

Cheney's office later clarified her remarks, making clear that she was not ruling out the possibility of Trump's live testimony.

So I don't know what to make of this. Was I right or was I wrong?
I might have been right in another way.
It's possible that the January 6th Committee thought he might actually agree to live testimony and knew that he would, as Liz Cheney said, turn his appearance into a circus or at least attempt to.
Perhaps Cheney and the committee knew what to expect and decided they wouldn't give him a megaphone to air his grievances, or at least make sure there were strict rules in place if they did allow him to testify live.
Perhaps they think the optics of refusing to allow him to testify live would look bad for the committee.
at October 24, 2022 No comments:
Email ThisBlogThis!Share to TwitterShare to FacebookShare to Pinterest
Labels: J6 Committee, J6 Trump subpoena, Trump testifying
Older Posts Home
Subscribe to: Posts (Atom)