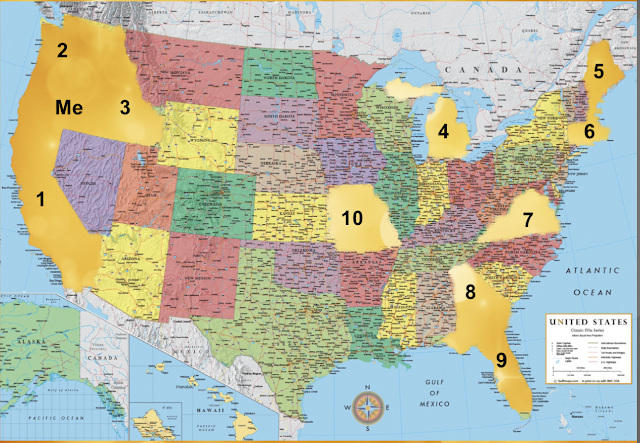 Above are the states aside form Oregon where I have old friends who I keep in touch with.

In following the election results this year unexpectedly I ended up anxiously watching the returns from my newly adopted home state of Oregon since the race for governor was a nail-biter with the right-wing candidate having a good chance of winning. Thank goodness she didn't so I will have Tina Kotek as my governor for the next four years.

I also paid particular attention to the elections in the 10 states where friends live.

Having lived in Michigan since college until we moved to Massachusetts I have lots of friends there. It was a relief to learn that not only did Gov. Whitmer win but so did all the Democratic statewide candidates.

Then moving to the other state where I have the most old friends, Massachusetts, despite the misleading headline, this tells the story:

In fact this is literally correct since this election was called before the Oregon governor election was called on Wednesday, but Tina Kotek is also a lesbian.
One of my late wife and my closest friends lives is in Georgia. The good news from there is that Herschel Walker didn't win, but the final chapter will be written when he competes in a runoff with Sen. Warnock. Unfortunately Stacey Abrams lost the race for governor to Brian Kemp.
My best friend from high school and my first wife lives in California. The good news from California is that it is solidly blue thanks to the fact that most Republicans live in the less populated eastern parts of the state.
The race for mayor of Los Angeles is supposed to be non-partisan but it pits Rick Caruso and Karen Bass against each other because  incumbent Mayor Eric Garcetti could not run for re-election due to term limits. "The New York Times' Jennifer Medina wrote that the race “has focused on voters’ worries about public safety and homelessness in the nation’s second-largest city” and could “become a test of whether voters this year favor an experienced politician who has spent nearly two decades in government or an outsider running on his business credentials."
My impression is that billionaire Caruso is much further to the right than Karen Bass who was chairman of the Congressional Black Caucus. 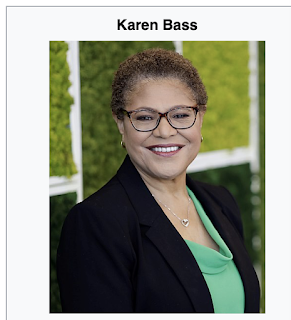 This is what Axios has to say about this election:

Why it matters: A first place showing for Caruso would send shockwaves across the Democratic Party and provide another data point that midterm voters in deep-blue places are fed up.

I have one old friend and a niece who lives in Washington. I don't know about local races there but the good news is that Democrat Patty Murray won 57% to 47% against her Republican opponent. The winners of House races will likely reflect the eastern red sections of the state where I expect there will be GOP winners.
I could even find one piece of good news from Florida where my dear toddler girlfriend lives. 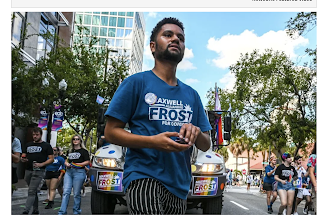 Florida Democrat Maxwell Alejandro Frost made history after he became the first member of Generation Z to be elected to Congress. 25-year-old Frost won his race for Florida’s District 10 with a sweeping vote, pulling in 59% of the vote from his Republican opponent Calvin Wimpish, who only gained 40% of votes from Floridians. Frost will now succeed outgoing Democratic Rep. Val Demings. Of course Demings lost to Marco Rubio who won 58% of the statewide vote to Demings’ 41%.
I also found a smidgen of good news where my childhood best friend, the son of my mother's best friend, currently lives. He lives n the liberal enclave of Sun Valley, Idaho. Of course Idaho is deeply red, but Republican incumbent Gov. Brad Little won easily over his Democratic challenger. What is significant is that he survived a GOP primary challenge from his Trump-backed lieutenant governor, Janice McGeachin.
I have two newly minted friends who live in Missouri. One of them is apolitical and I assume the other favors Democrats. I am not sure how they feel about the results from their state but while a Republican won the US Senate race of their two members of the US House the results were split with Democrat Cori Bush beating her Republican opponent Andrew Jones 72.82% to $24.38%. I think both of them are pleased  that voters approved recreational marijuana 53.11% to 46.89%.
One of my late wife's best friend from childhood lives in Maine where the important race was for governor. There Democrat Janet Mills will remain in office, beating GOP challenger Paul LePage. This is how The Guardian described LePage:

Paul LePage: is Maine ready to welcome back the ‘Trump before Trump’?

In Virginia, while there were no major races for Governor or Senate, one House race made the national news where Abigail Spanberger won reelection in what is being called a bellwether Virginia district. 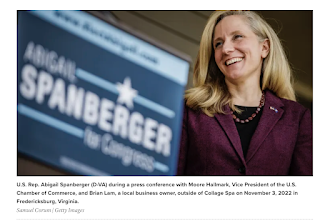 Now I am going to send this to the friends referenced here to see if they have anything to add from their home states elections.
at November 10, 2022 1 comment:
Email ThisBlogThis!Share to TwitterShare to FacebookShare to Pinterest
Labels: 2022 election, Hal Brown, midterm elections
Older Posts Home
Subscribe to: Posts (Atom)