I woke to the nightclub shooting on TV: Thoughts about the MAGA demonization of being woke

I woke to the nightclub shooting on TV: Thoughts about the MAGA demonization of being woke
By Hal Brown
I try to write something every morning but may not post something until later if I post at all today. I have to leave soon to go for mohs surgery on the tip of my nose. 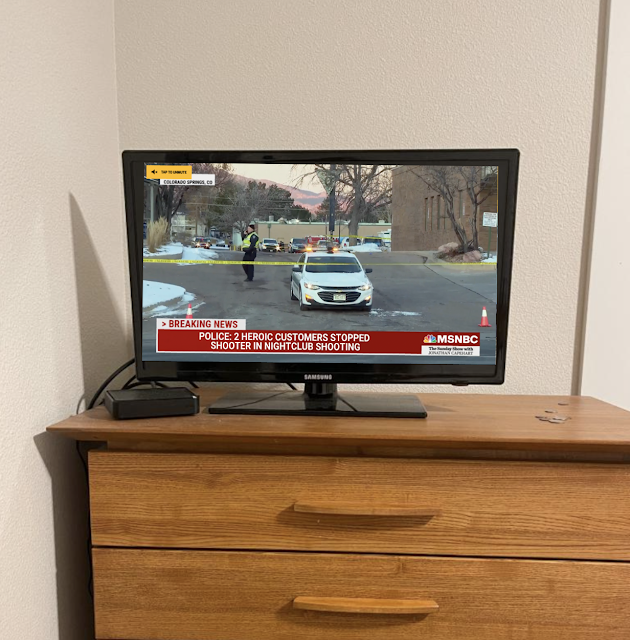 This is how Mirriam-Websters defines being woke:

Woke is now defined in this dictionary as “aware of and actively attentive to important facts and issues (especially issues of racial and social justice),” and identified as U.S. slang. It originated in African American English and gained more widespread use beginning in 2014 as part of the Black Lives Matter movement. By the end of that same decade it was also being applied by some as a general pejorative for anyone who is or appears to be politically left-leaning. 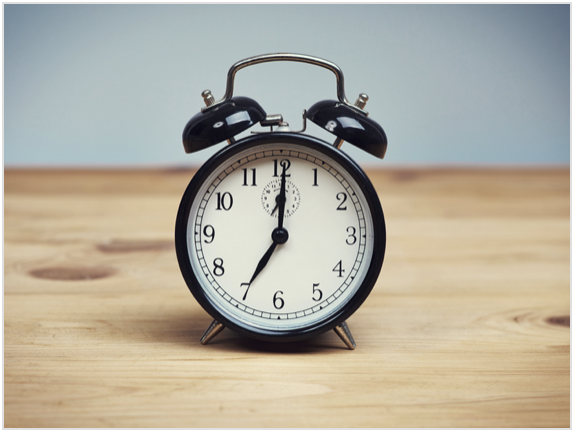 By chance they used the image of the clock above. I literally woke to this news as I turned on my bedroom TV. I thought about the new meaning of woke.

I thought about how MAGA politicians campaign against "woke" and how it suits them to play into the hate fueled prejudices of bigots. They can use anti-LGBT code words and dog whistles but Republican governors with Republican legislatures can actually pass laws.

If you are the presumptive alternative to Donald Trump for the Republican presidential nomination everything you say or do will gain national media attention.

More than any other politician, and this includes Trump, Ron DeSantis epitomizes the anti-woke movement. Consider this HUFFPOST story: 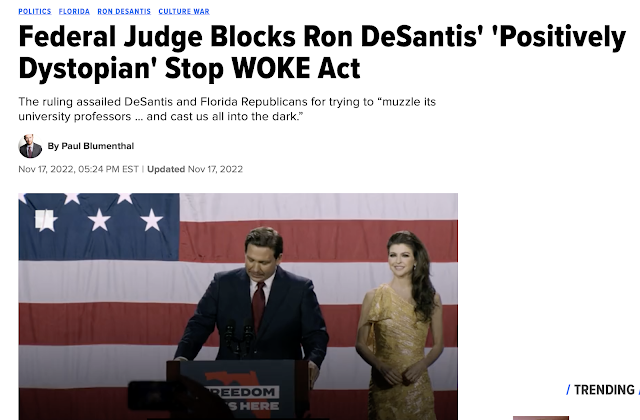 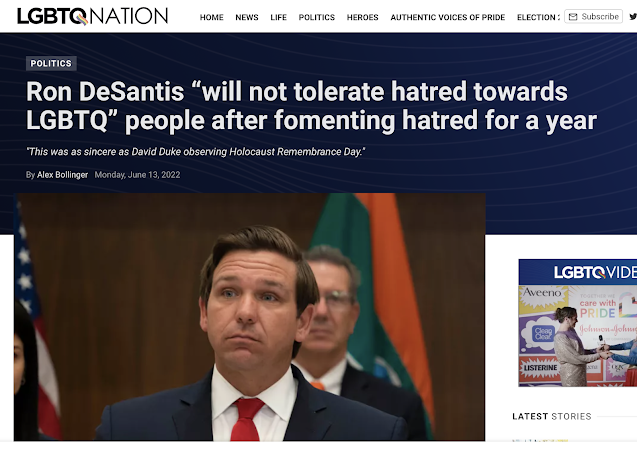 After spending the last year attacking LGBTQ people, Florida Gov. Ron DeSantis (R) claimed that the state “will not tolerate hatred towards the LGBTQ” community “of any kind” as part of his proclamation on the anniversary of the Pulse shooting.

On June 12, 2016, 49 people were killed and 53 people were injured when a gunman opened fire on the LGBTQ nightclub in Orlando. June 12 has remained Pulse Remembrance Day in the state. DeSantis ordered flags in the state to be flown at half-mast.

From the LGBTQ Nation story: 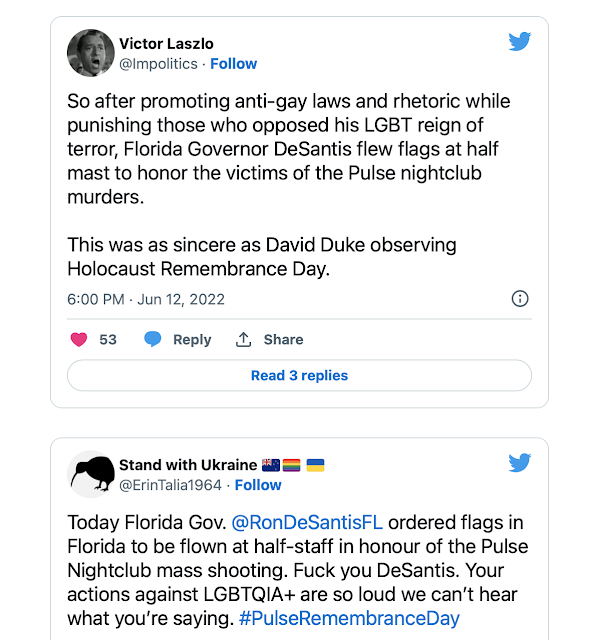 DeSantis is the ultimate hypocrite. He happily signed the "Don't Say Gay Law" while saying that “the state of Florida will not tolerate hatred towards the LGBTQ and Hispanic community of any kind, and together we stand united against terrorism and hate of any kind."

This is how DeSantis described his lopsided victory over Charlie Crist in his gerrymandered state:

If the Colorado Springs shooting happened in Florida like the Pulse Nightclub shooting, I wonder how DeSantis would have been parsing his words in order to condemn it while sending the message to his anti-LGBT supporters that he didn't mean what he was saying.

I suppose he could dust off what he said after the Pulse Nightclub shootings and order flags to be flown at half-staff.

It is a shame worth crying over that the notion that "woke" has been applied to the political left because I'd like to believe that there are many people who consider themselves to be non-MAGA Republicans who believe in the percepts of being woke.

Feeling people are proud to be woke.

This was on Fox News:

"How do we tamp down hate crimes across the board?" Neville wondered.

"I think it begins in our schools, our educational system," Rogers explained. "We have to do a lot of educating in elementary school with regard to, yeah, people may be different in your eyes but they're people, they're American citizens and they deserve to have the constitutional protections that all of us have."

"So, it begins at the elementary school level and we have to make sure that it continues throughout our entire lives," he added. "We need to stop the hateful rhetoric on the internet, by our politicians, by everyone! And we need to bring the temperature down and understand that, you know, we're all God's children and we have to respect each other."

And then there's her expression of feigned sympathy: 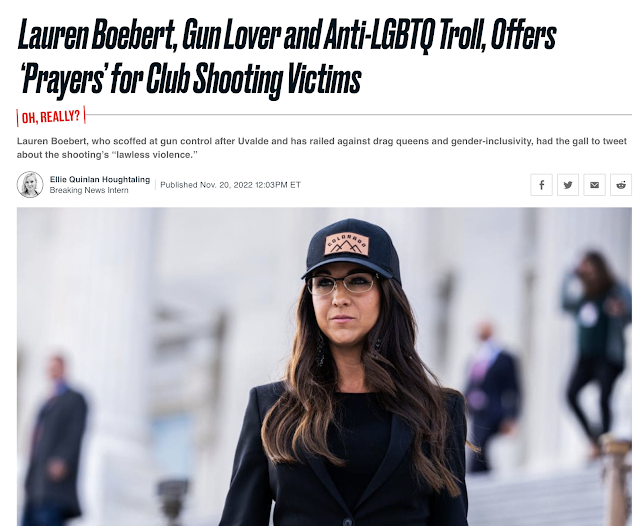 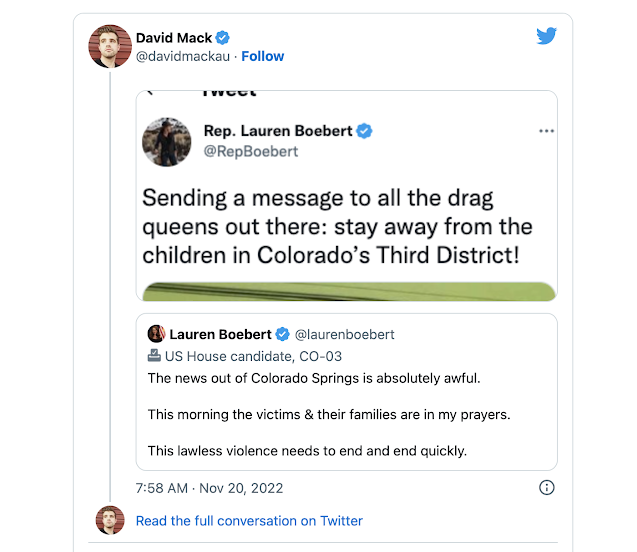