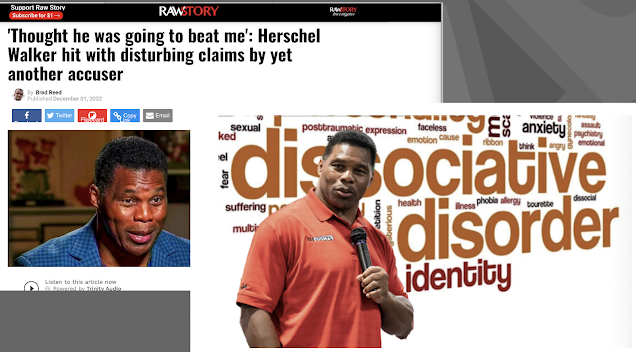 'Thought he was going to beat me': Herschel Walker hit with disturbing claims by yet another accuser

This is the comment I posted on the RawStory article, above, which led me to repost my blog stories about Herschel Walker and his claim that he suffered form Dissociative Identity Disorder, perviously called Multiple Personality Disorder.

I was a psychotherapist for 40 years and treated about five patients with the diagnosis, dissociative identity disorder (DID) - aka multiple personalities which Walker claims he was cured of (by a therapist that believes in demon possession). This is alway caused by severe prolonged childhood trauma, usually sexual abuse, and far more common in women than men. A hallmark of DID is that when one personality is in control the other often have amnesia for that that personality does. Another is that there are one or more personalities (called alters) that identify with the past abuser and are dangerous to the other personalities and sometimes other people.

Walker's abuse seems to be that he was bullied as a child. This doesn't fit the diagnosis. "Cure" means that all the personalities have been integrated into one. It means there are no amnesias.

DID is extremely difficult to cure. If, a big if, Walker really had DID, I believe he still has it. This would explain his saying he didn't do thing others attest to his having done. It means that another personality did it. The personality denying it might not remember doing it.

Herschel Walker, or one part of him, may be telling the truth

About the "therapist" Jerry Mungadze who Walker claims cured him.  He believes in demonic possession, the occult, exorcism and gay conversion therapy. One does not "overcome" a serious disorder like he claims to have had with help from God.

During my 40 year career I have treated five patients with dissociative identity disorder of DID. I could write a book about them and my experiences in trying to help them avoid engaging in the self-destructive behavior which was caused by one or more personalities, or alters, trying to hurt or even kill the others. In some cases these alters didn't know that killing the body of another alter or alters would also end their lives. The belief system of such alters sometimes didn't include a recognition that they resided in the same physical body as the other alters. In fact when in control these alters often had far greater physical strength than the others and didn't experience pain.

This being said I have come to a conclusion about Hershel Walker claiming that allegations of his paying for an abortion or abusing his ex-wife are lies may be the truth as he knows it, or at least as the Walker saying this knows or remembers it.

The best way to understand Hershel Walker may be to consider his own book about how he suffered from dissociative identity disorder (which until it was renamed it was called multiple personality disorder or MPD). You can read a good summary of it here.

To quote the article:

Everyone has various facets that make up his or her personality -- assertive, angry, comforting. But, experts explain, in DID, these various parts -- known as alters -- don't come together as one cohesive single personality. Instead, one or the other part of the identity takes over and determines one's behavior.

Asked how many different personality facets, or alters, he has, Walker replied: "To be honest, I have no idea." But in the book, Walker talks about a dozen. They're described by their roles or function: the Hero, the Coach, the Enforcer, the Consoler, the Daredevil, the Warrior, to name a few.

Some of these alters did a lot of good, he said. But others led to some extreme and violent behavior, most of which Walker said he doesn't remember. As a result, the disorder, or DID, led to the breakup of his marriage. "I lost the person that was like everything to me," he said. "I lost my wife and that's totally, totally devastating to me."

Walker said a competitive alter caused him to be a danger to himself, playing Russian roulette more than once. In the book he describes another incident, the very late delivery of a car, that made him so angry he had thoughts of killing someone. It was the moment he realized had to seek help, he said, which ultimately led to his diagnosis.

There are two crucial sentences above:

In the first sentence what is most important to note is that he admits to amnesia. In the second sentence he refers to a competitive alter engaging in suicidal behavior. Calling this merely a competitive alter minimizes the fact that this alter was dangerously self-destructive and malevolent. Having such an alter is, if not a universal trait in DID at least is very common. It is a personality that in order to protect the core personality or personalities identified with the aggressor.

The following is based on my own experiences with DID patients, extensive reading, and attending workshops presented by experts.

DID develops as a way to cope with extreme childhood abuse. It is usually sexual abuse of a female by an adult male in the family, usually a father, step-father, or other caregiver. DID in males in less common. The most well known case of a male with DID is Billy Milligan.

For reasons not known, some victims are capable of creating alter personalities which experience the abuse and then instead of developing totally amnesia for it create, through a kind of self-hypnosis, another personalty which has no memory for it.

Sometimes they never seek treatment because despite periods of amnesia they don't feel much distress.

It is an unfortunate aspect of the disorder that in the worst cases the patient has an alter that identified with the authority figure who abused the actual patient who is perceived by this alter as a different person. While originally a protector they can develop to be a destructive force in the patient's life.

A hallmark of DID is amnesia.  During many of the times when certain alters are in control other alters have no memory of what was happening.

Here's a clinical example from my own experiences (with all names changed). This client died about 15 years ago, officially ruled a suicide although it is possible that he aggressive malevolent alter attempted to kill all the other alters believing he would survive:

One of my patients first came to me with the presenting problem being that she was losing things, and when I pressed her to explain she reluctantly told me she was also losing track of time, sometimes entire days. In that first session I said matter-of-factly "is there someone here who'll tell me what happens when Alice doesn't remember what is going on. Alice was very puzzled by this question but I told her to bear with me and I asked again three or four times. She then changed her facial expression, looked me directly in the eyes, and said in a slightly different voice, "she's so stupid she doesn't keep her valuables in a safe place." I asked who I was talking to and my patient said "I'm Denise." Then I went on to talk to Denise and when I realized I was dealing with a full-blown case of DID I also ended up "meeting" the malevolent and dangerous personality who I eventually had to tell with in almost all of our sessions. This was George who eventually was created as a protector when Alice was being sexually abused by her father but when she was an adult also became her most destructive alters.

Curing DID is exceedingly difficult and those therapists who claim they have done this may be deceiving themselves. A complete cure means that all the alters have integrated into one, that the memories of being abused have been dealt with in therapy, and there are no incidents of present day amnesia. The reports of amnesia with someone with DID means that another alter or alters were in control during the period of lost time.

Back to Herschel Walker -

If Walker really had DID it would mean that at some point in his life he suffered severe abuse and that this was most likely prolonged and came from an authority figure. It could have been a family member or someone in the community like a church leader or coach.

If he now is a mostly functional individual who still has unresolved issues with DID, perhaps with several personalities present at different times but with the destructive  personality dormant, he would still have amnesia for things that personality did in the past.

If Walker had DID it is likely he still has it. He identified several different alters in his book. If Georgia voters elect the body and the brain that contains them they are electing all of them to be their senator. He could also create new alters as needed once he is a senator. This isn't deliberate in the way we understand someone consciously developing a persona. People with DID sometimes have alters who create alters because there isn't one central psychic entity. They don't exist as one person, they exist as a group of people/personalities some of which have no knowledge of the existence of the others. They live their lives in a way unique to people with DID.

There are a number of celebrities who claimed or are reputed to have or had DID. Marilyn Monroe, Britney Spears, Lady GaGa, Mel Gibson, and Roseanne Barr are among them. Here's a list which does include Hershel Walker.