Words that jumped out in Jennifer Rubin's column

Words that jumped out to me in Jennifer Rubin's column

Stories breaking through the day that piqued my interest are on the bottom of the page.

I am much more snarky in my writing than Jennifer Rubin and would have been tempted to used this illustration (not that the Washington Post would have allowed in the one chance in a billion I could ever write for them me to do so) for a similar column. 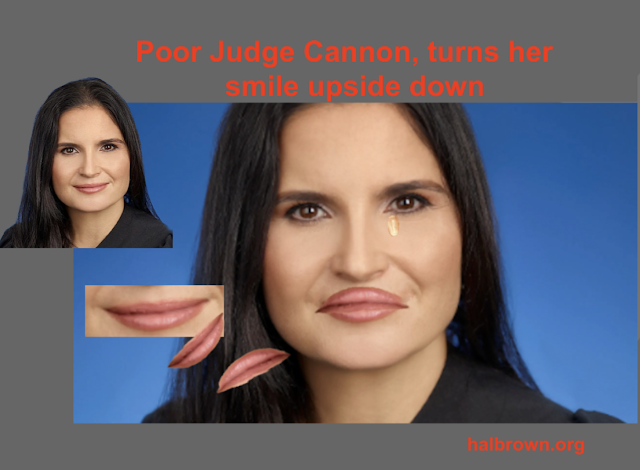 Her profile: Jennifer Rubin writes reported opinion for The Washington Post. She covers politics and policy, foreign and domestic, and provides insight into the conservative movement, the Republican and Democratic parties, and threats to Western democracies. Rubin, who is also an MSNBC contributor, came to The Post after three years with Commentary magazine. Prior to her career in journalism, Rubin practiced labor law for two decades, an experience that informs and enriches her work. She is a mother of two sons and lives with her husband in D.C. She is the author of “Resistance: How Women Saved Democracy from Donald Trump.” She earned her BA in history form University of California at Berkeley, and her law degree at the University of California at Berkeley, JD.
Many if not most of you have seen her on MSNBC: 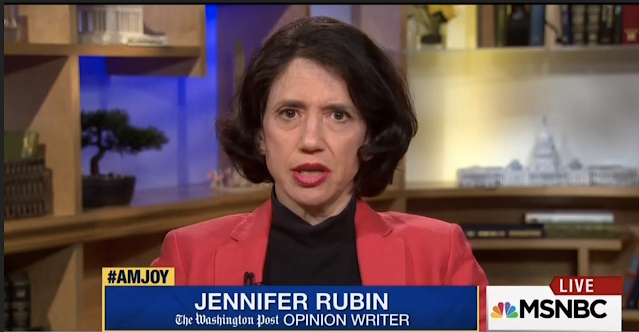 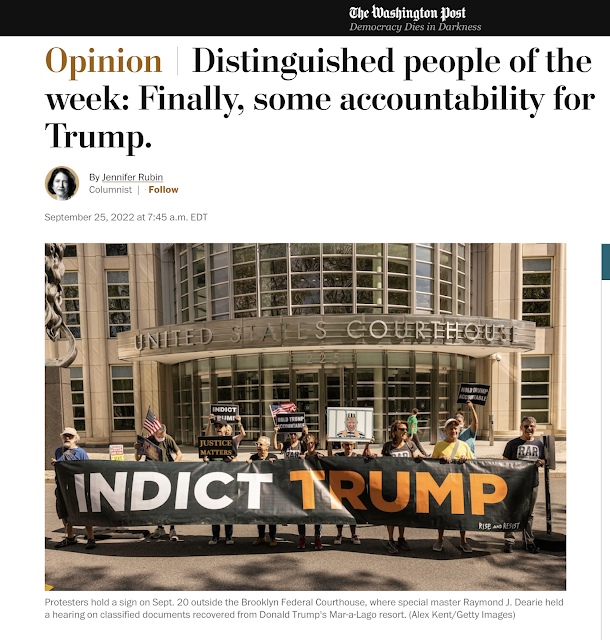 I also liked the photo used to illustrated the column.

(the three judge panel over-ruling Canon) helped restore some faith in our court system — and in democracy.

The word is highlighted. It reflects ambiguity. How much is "some" faith. My sense is she means a little faith. I wonder why she didn't put it that way..

In late Middle English "hap" meant "good fortune" so obviously adding -less means the opposite. There are synonyms she could have used, for example unfortunate  unlucky, luckless, out of luck, ill-starred, ill-fated, jinxed, cursed, doomed; unhappy, forlorn, wretched, miserable, or woebegone. I do like hapless, but I might have added woebegone (Middle English (in the sense ‘afflicted with grief’): from woe + begone ‘surrounded’ (past participle of obsolete bego ‘go around, beset’) a word used to mean sad or miserable in appearance. I'd be tempted to use the image I made of her where I copied her smile and turned it up-side-down and added a tear.

She wrote that the three judges "moved quickly to put an end to Trump’s stalling and nonsense."

Rubin could have merely written stalling, a typical legal defense tactic, but adding "nonsense" is something one rarely sees in descriptions of what defendants do.

I like that she is reminding rational readers about this paranoid claim aimed at his equally paranoid cult suggests to me, as a retired psychotherapist, that Trump may be clinically delusional.

She notes that the three-judge panel systematically dissected and discarded Cannon’s rulings...

This one led me to look up the meaning in a legal dictionary. "Equitable jurisdiction is a system of justice designed to supplement the common law by taking action in a reasonable and fair manner which results in just outcome. It is based on a set of legal principles namely equity for achieving natural justice. Under equitable jurisdiction no one is allowed to enforce his/her legal rights if it would be unconscionable for him/her to do so." This doesn't sound very good for a judge, especially a federal judge, to have this term applied to them by a higher court.

Ruben went on to write that this "should have been the end of it, but the panel did not spare Cannon" and she went on to write:  "In other words, the panel effectively said Cannon was acting without any legal or factual basis."

The key word to me here is highlighted. Rubin could have used a milder phrase like "with minimal" instead. "Without any" is much stronger.

Rubin writes “Plaintiff suggests that he may have declassified these documents when he was President. But the record contains no evidence that any of these records were declassified.” and then she adds "That’s legalese for: What in the world was Cannon thinking?"

Here Rubin suggests in layman's language what the three judge panel was thinking.  I wish I could have been a fly on the wall hearing what they said in private.

Rubin reminds us that the panel also found the idea of “irreparable harm” to Trump, which Cannon essentially found on the basis of his simply being a former president, was absent.

I think Rubin was restrained here in resisting a more colorful phrase like "utterly ridiculous." I probably would have written something far more snarky like "an exercise in ass-kissing sycophancy."

Rubin writes that "If Cannon flipped the legal system on its head, the 11th Circuit turned it right-side up." She goes on to note that a court cannot facilitate his antics by making up conflicts of law and fact where there are none.

The word "antics" comes from early 16th century: from Italian antico ‘antique’, used to mean ‘grotesque’ or bizarre. Can anyone remember any president who had this word used to describe his behavior?

Rubin concludes her column this way: "Perhaps Trump’s lies and bogus explanations really won’t protect him in a court of law. Maybe he is going to be held accountable for his conduct. If so, these judges will have repaired some of the damage his lawlessness has done to our democracy. For that, we can say, well done."

Again she uses lots of wishful words and phrases. Truly coming this far, the high court panel does deserve a hearty "well done" from those of us who believe nobody in America is above the law. 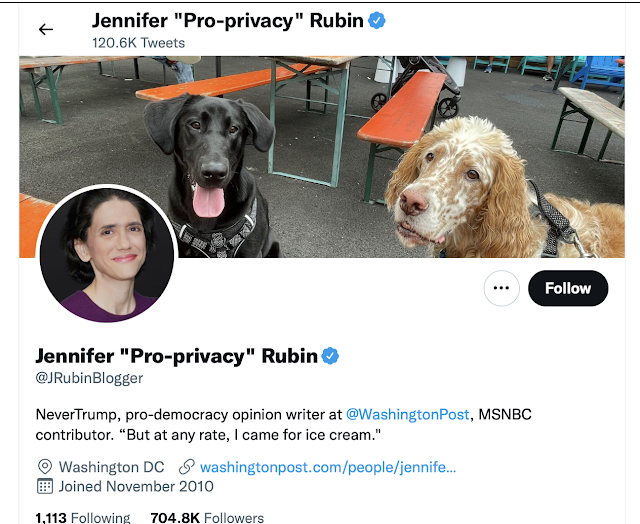 News of the Day

My Comment
Trump probably has an average IQ, or at least that's what my psychologist friends who used to do intelligence testing told me, and in fact they sai he might score less than average on a standardized test because of deficits in general knowledge and poor critical thinking ability. As a clinical social worker psychotherapist (retired) I think he learns pretty might like a lab rat does, by trial and error as well as by rewards and punishment, except that as a malignant narcissist punishments that would deter a normal person from repeating the behavior doesn't deter him. In fact, I think that what this expressed belief that he can use his mind to declassify top-secret documents means either he thinks he's mastered a kind of Vulcan Mind Meld for documents or he's Carnac the Magnificent strongly suggests is that he's clinically delusional. Click image to enlarge. 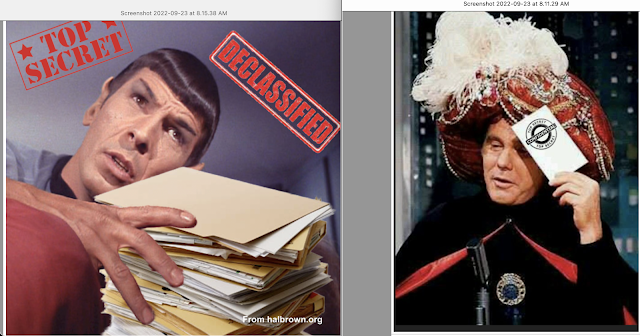 Back to Trump and his magic mind, I wrote about this here.

Here's a good one! 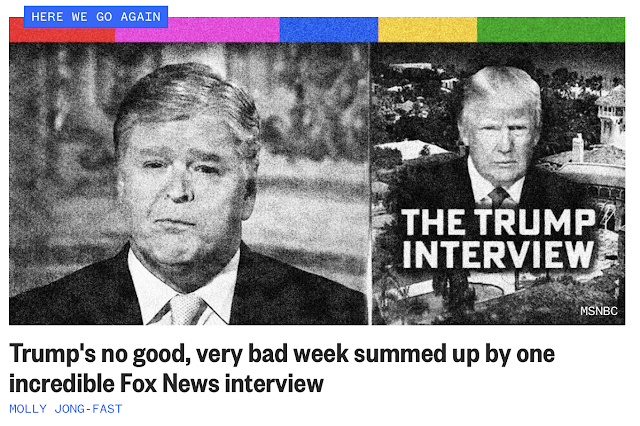 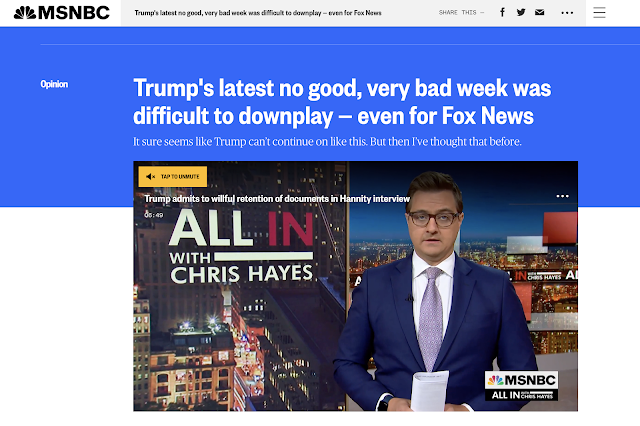