Kevin and Marjorie, sitting in a tree, K I S S I N G

Kevin and Marjorie, sitting in a tree, K I S S I N G
By Hal Brown
Scroll down for Jan. 25th update The insert was manipulated by me to bring McCarthy within kissing distance of Greene.

When I looked at Salon this morning this was the main article:

McCarthy's nauseating adoration for Greene continues throughout the article (in The NY Times), leaving it impossible to believe there's anything resembling reluctance on either side of this alliance.

The title uses the words "hopelessly devoted" plus the texts say nauseating adoration, indeed... I rather doubt these words were chosen at random.
And then there's this quote:

There are non-too-subtle implications here, so I'm going to come right out and say it. If it looks like an amorous duck, walks like one and talks like one, perhaps it is one.
I suppose you can say that the Devil made me do a wee but of tinkering with the image when I saw, like how anyone could miss it, how intimate these two appeared to be in the photo.
The "Kevin and Marjorie sitting in tree, K I S S I N G" was too euphonious not to use it in a blog for a title.
Democrats are  reveling at the level of Republican dysfunction within the House. Angry non-MAGA Republicans may be saying "you made your bed, Kevin, now sleep in it" bring up the image of Kev and Marge under the sheets. If I could draw I'd make a cartoon showing this.
The notion of a political marriage was not lost on journalists. Consider:

“He was not talking about his wife of 31 years, the mother of his two children,” the MSNBC anchor said of the House speaker's promise to the far-right congresswoman.

Excerpt:
O’Donnell pointed to a New York Times article in which McCarthy was quoted as telling a friend: “I will never leave that woman. I will always take care of her.”
McCarthy wasn’t “talking about his wife of 31 years, the mother of his two children,” noted O’Donnell.Instead, McCarthy was reportedly making a political marriage vow to extremist Rep. Marjorie Taylor Greene (R-Ga.).
The Times article — titled “How Kevin McCarthy Forged an Ironclad Bond With Marjorie Taylor Greene” — explained how Greene’s help was crucial in McCarthy finally winning his drawn-out bid for the speakership.
McCarthy “can only hope no one back home in Bakersfield, California, was reading The New York Times today,” O’Donnell added.

If you have a subscription to The New York Times you can read the article O'Donnell was referring to. Here's the photo used to illustrate it. The background suggests it was taking at the same time but a few moments after the photo Salon used was taken.

Their political union — a closer and more complex one than has previously been known — helps explain how Mr. McCarthy rose to power atop a party increasingly defined by its extremes, the lengths to which he will go to accommodate those forces, and how much influence Ms. Greene and the faction she represents have in defining the agenda of the new House Republican majority.

“If you’re going to be in a fight, you want Marjorie in your foxhole,” Mr. McCarthy said. Both he and Ms. Greene agreed to brief interviews for this article. “When she picks a fight, she’s going to fight until the fight’s over. She reminds me of my friends from high school, that we’re going to stick together all the way through.”

It is a relationship born of political expediency but fueled by genuine camaraderie, and nurtured by one-on-one meetings as often as once a week, usually at a coffee table in Mr. McCarthy’s Capitol office, as well as a constant stream of text messages back and forth.

From reading this and other articles one might conclude that for the most part McCarthy a savvy political tactician and is manipulating Greene by giving in to her demands. I wonder whether the reverse is true with Greene using her wiles to manipulate McCarthy.

Greene and her husband Perry divorced in 2022. Here they are in presumably happy times for the couple celebrating their 25th anniversary. 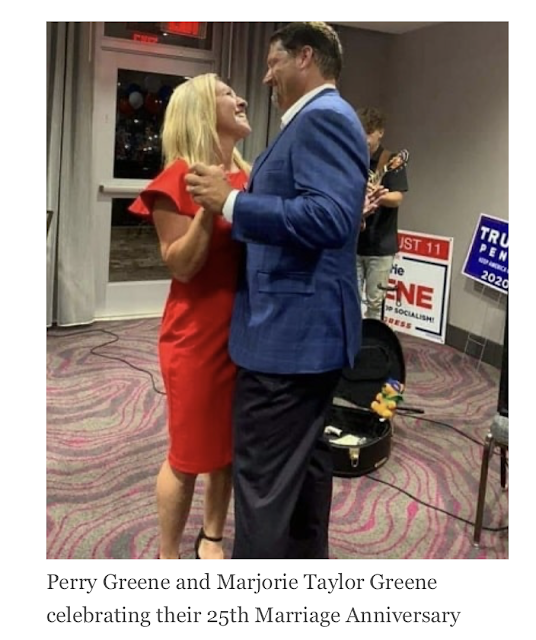 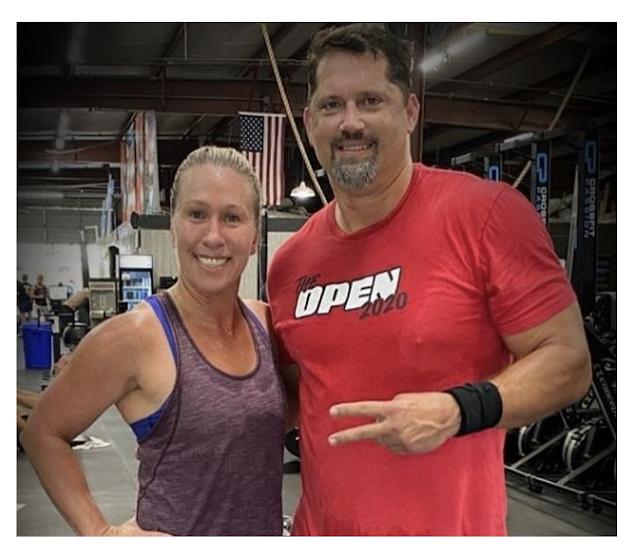 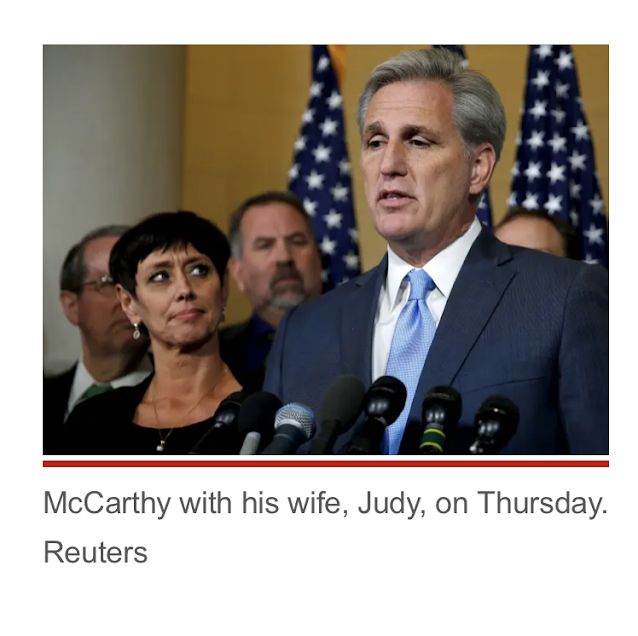 Up close and personal with Marjorie Taylor Greene: 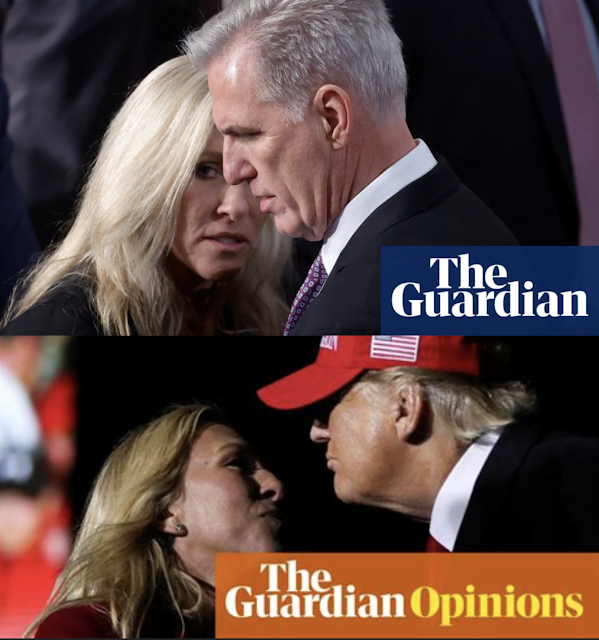 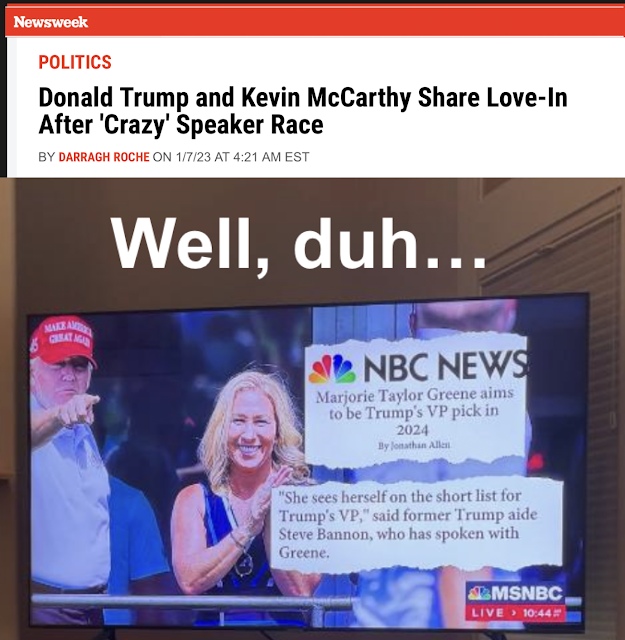 Marjorie Taylor Greene aims to be Trump's VP pick in 2024 -- "She sees herself on the short list for Trump's VP," said former Trump aide Steve Bannon, who has spoken with Greene.

What a no-brainer this is. Of course MT Greene aspires to higher office.  This leaves only three options. She could run for governor. She could run for the Senate. She could be Trump's choice as his VP running mate, no inference meant by using the term "mate" intended. This would be her most likely ladder to the presidency since actuarial tables suggest Trump might not live to complete a term should he be elected.
What she has to be careful of is that for the present she serves two masters, Kevin McCarthy and Donald Trump. If these two have a falling out she will have to chose sides.
That might not be easy. McCarthy has the power to derail her ambitions to be the unofficial Speaker of the House calling the shots whenever she thinks it will accrue to her benefit. On the other hand if she crossed Trump he would never select her to run with him.

About me
edit
The Cranberry era
edit

It takes courage to comment on publicly displayed trysts and you have put this out there. There's no unseeing it.
What sad little creatures the both of them are.
It is one thing to explore an extramarital dalliance.
It is quite another to decide that the adulteration will be to the whole of the nation.
Put them in togas, meandering about the seven hills, they're no different than the behaviors of ancient Rome. Oh, yeah, our plumbing is a little better...

Like I offered, there's just no unseeing all of this incestuous and contemptible behavior.