Could Michael Moore be right again? Is he Carnac the Magnificent?

Could Michael Moore be right again?

Is he Carnac the Magnificent? 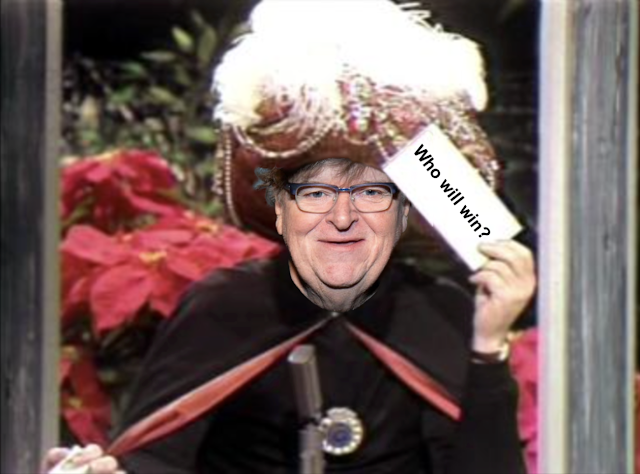 If you are too young to remember...

Longtime (Johny Carson) sidekick Ed McMahon ritualistically and bombastically introduced the Carnac routines. The announcement implied Carnac was responsible for some scandal or disaster currently in the news, as "And now, the great seer, soothsayer, and sage, Carnac the Magnificent." After Carnac entered and stumbled, Ed would continue as follows:

The act involved a variation of the magician's billet reading trick: divining the answer to a question written on a card sealed inside one of the envelopes, announcing it to the audience, then tearing open the envelope to reveal the question. The comedy came from an unexpected question following a seemingly straightforward answer.  Wikipedia

Let's hope he is when it come to this prediction... 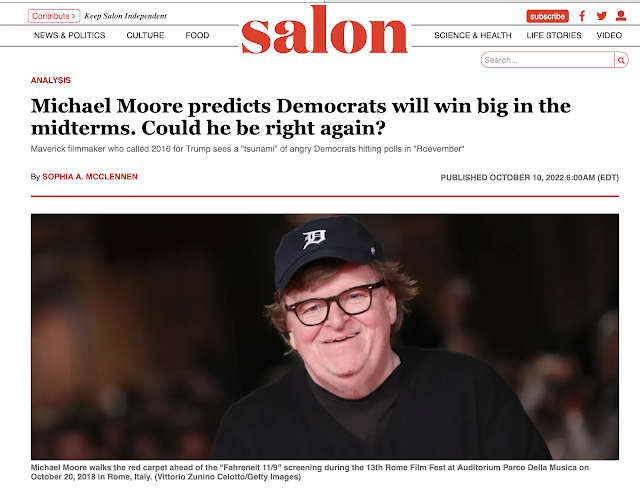 In his next "tsunami of truth," Moore reminded readers that despite all the ways that the media tends to make the American right seem massively powerful, they're really just a big bunch of losers. Republicans have lost the popular vote in seven of the eight last elections. As Moore explains it, "Only because of the slave states' demand for the Electoral College — and the Republicans' #1 job of gerrymandering and voter suppression — do we even have to still deal with their misogyny, their destruction of Planet Earth, their love of guns and greed, and their laser-focused mission to bury our Democracy."

That leads to the next installment: Republicans will lose because this time around they are "running the biggest batch of nutters nationwide in American electoral history."  He then promises to offer a list of the top 10 "biggest whackadoodles on the Republican side of the ballot."

If one is a famous enough pundit or personality and makes a prediction that goes against what others of the same ilk are saying and they are correct then they are lauded as being both brilliant and prescient.
If they are wrong then their prediction is usually ignored unless they are really famous. Some many people of note predicted that there was no way Donald Trump could beat the highly qualified Hillary Clinton. There was so much egg on so many faces that no single person got smeared with being egregiously wrong. There was plenty of egg to go around.
I hope Michael Moore is proved to be right about his prediction that a tsunami of truth will hit the American electorate. 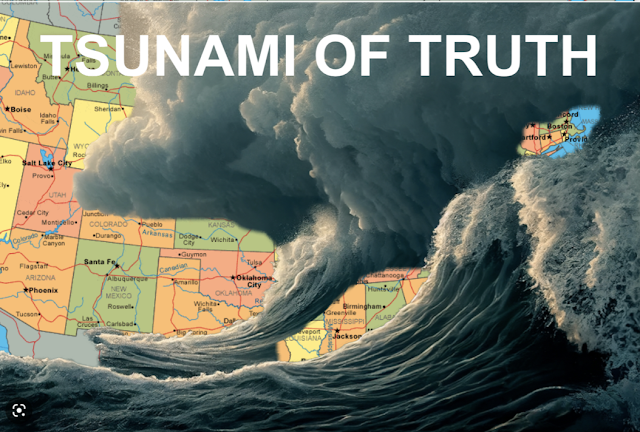 They also cross-publish with Salon, and summarize article published on websites which you need to subscribe to in order toe read them, The New York Times and Washington Post for example. They have an active c0mment section.

at October 10, 2022
Email ThisBlogThis!Share to TwitterShare to FacebookShare to Pinterest
Labels: Michael Moore