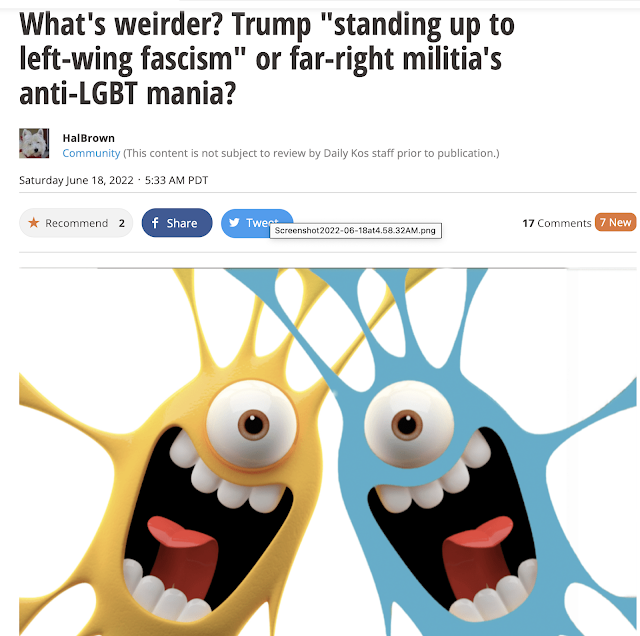 One thing stood out for me in Trump’s rambling word salad vomit-inducing hate-filled speech on Friday at a Faith and Freedom event in Nashville, Tennessee (watch video here). What may have stood out to those of you who saw it replayed (I saw it in RawStory article) his characterization of Rep. Adam Shift as “watermelon head” This is how he put it: “I watched this Adam Schiff the other day. Shifty Schiff, this guy is nothing. He's nothing -- we call him watermelon head."

Hmmm, now we know Trump may be watching stations like MSNBC which air interviews with Rep. Schiff. I doubt Fox News interviews him.

His all but promising he’d pardon those who stormed the Capital if he’s reelected is also making headlines, on HUFFPOST for example:

Trump uses projection all the time accusing Democrats of doing what he’s doing. This is the line which came near the beginning of the series of disjointed diatribes which jumped out at me:

“that is why this month we’re going to stand up to the left-wing fascism...”

Not only is this sheer projection but it defies the very definition of the word fascism. This is how my online dictionary defines fascism (my emphasis):

fas·cism| ˈfaSHˌiz(ə)m | (also Fascism) noun an authoritarian and nationalistic right-wing system of government and social organization. • derogatory extremely authoritarian, intolerant, or oppressive ideas or behavior: an outright ban is just fascism. • [with modifier] very intolerant or domineering views or practices in a particular area: this is yet another example of health fascism in action. The term Fascism was first used of the totalitarian right-wing nationalist regime of Mussolini in Italy (1922–43); the regimes of the Nazis in Germany and Franco in Spain were also Fascist. Fascism tends to include a belief in the supremacy of one national or ethnic group, a contempt for democracy, an insistence on obedience to a powerful leader, and a strong demagogic approach.

Fascism is a far-right, authoritarian, ultranationalist political philosophy. Fascist governments traditionally take the form of a one-party dictatorship led by a single person. Fascism stands in contrast to the principles of democracy, in which the government should work to benefit all of its citizens, and instead views the nation's wealth and success as far more important than the welfare of its citizens. As a result, there are very few individual human rights, if any, at all, under a fascist regime. Fascist regimes often create stark divisions between classes in both society and the economy and use force to suppress opposition and keep the masses under control. Some extreme fascist regimes can also be classified as totalitarian countries.

The ignorance of a man whose own Secretary of State called a moron about the meaning of various political terms is not surprising. For the man who not only lies like a rug and is also a font of misinformation and ignorance personified, this one struck me as particularly weird.

In a completely different way than my reaction to the segment of Trump’s speech that I watched did, it struck me as weird how the far-right militias have expanded their enemy’s list to include members of the LGBTQ+ community and target, literally, Pride parades.  Did some group have a meeting and decide to do this or was there some secret national strategy meeting and they decided to enter the culture wars? Regardless, it’s like these people, mostly young men, have to have something to vent their collective spleens over and they decided, what the hell, we hate gay people and they’re having parades, and there are no political events making the news this week so lets head to Idaho and if we don’t get to do some gay bashing at least we’ll make the news. Guess what? They did the later:

At least in the appalling event that if Trump becomes president again, he can’t pardon them because if convicted it will be for breaking state laws. I wouldn’t be surprised if some of these men are so stupid that they think Trump has the authority even now to pardon them.

The competition for the weirdest political news of the day or week is always tough. I’d have to call this one as a toss-up between the two I thought were pretty damn weird.

Here’s a three minute segment of Trump’s hour long speech if you can stand to watch it. I think it ranks up there with his most unhinged and incoherent speeches.

He also said that these extremists (on the left) are “consumed by rage against nature” among other off-the-wall things.

Having watched this video I have my doubts whether he even wrote the coherent parts, few as they were, of the speech. I suspect someone gives him bullet points which end up on his teleprompter and he riffs with his disgusting sure to get laughs in a friendly crowd (as some of these did) ad libs.

If Trump was actually a nearly as good a comedian as Volodymyr Zelensky was, even though he’s reprehensible it would be one thing, but he’s about as funny as a rubber crutch… oh wait, he and his audience think a rubber crutch is hilarious.

I see from the poll that some readers haven’t watched the three minute video. I know it is time you will never get back, and it is sickening to some to even watch and listen to him, but I recommend you do. Ask yourself whether Republicans in political office watch speeches like this and really think they want someone as unhinged as this to be their standard bearer.

This is from Trump disparages Pence for lack of 'courage' as Jan. 6 hearings continue in The Tennessean.

But Trump appeared to be paying attention, spending more than a half hour of his speech disparaging the committee and current Republican leadership.

"We have to fight some very sick and very evil people,” Trump said, describing the bipartisan House committee as having a “menacing spirit” and being “con artists" putting on a "theatrical production."

For now, Reed (the organization founder) sees it as the evangelical group’s role to remain neutral during the primary, like in 2012 and 2016, and offer potential 2024 candidates an opportunity to make connections with the Christian voters who will play an outsized role in deciding the nominee.

The stage in Nashville offered potential 2024 candidates like Sens. Tim Scott(R-S.C.) and Rick Scott (R-Fla.) and former United Nations ambassador Nikki Haley the chance to directly address some of the nation’s most influential evangelical grassroots activists and local leaders. On Saturday night, former Secretary of State Mike Pompeo is scheduled to deliver a speech.

Notably absent from the lineup were former Vice President Mike Pence, a veteran of the conference with deep ties to the evangelical Christian movement, and Florida Gov. Ron DeSantis, a potential top contender for the Republican presidential nomination.

On Friday, Trump talked extensively about Pence, attacking him in front of the Republicans who are most sympathetic to him: evangelical Christians.

“Mike Pence had a chance to be great,” Trump said. “He had a chance, quite frankly, to be historic. Mike did not have the courage to act.”

After an awkward pause, the audience responded with light applause.

These may be the kinds of really scary things that far-right militia members are being influenced by:

I don’t know whether the Michigan Attorney General regrets saying this, noting she ended up throwing red meat to the far-right culture warriors like Donald Trump, Jr.

Here in Portland, where I live, we are a magnet for far-right groups like The Proud Boys, this is making the news ahead of our Pride events:

Reply
0Recommend
Posted by Hal Brown at 7:15:00 AM
Email ThisBlogThis!Share to TwitterShare to FacebookShare to Pinterest