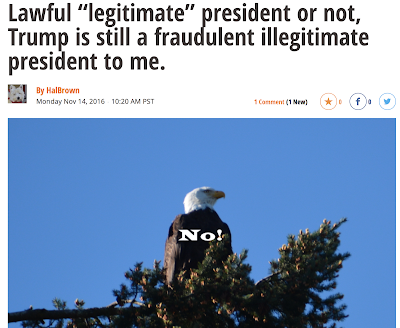 Not the Washington Post, not the New York Times, not Newsweek, Time nor Mother Jones.
Not even from Wikileaks. The National Enquirer scopes all these investigative news organizations with one of the biggest scoops since the Rosenberg spy case.
I was already seething with anger as I was about to click publish when I thought I checked the National Enquirer online and, not to my surprise, found they are shamelessly gloating over predicting Trump would win (left).

Now I am really, really pissed.
So, readers, here’s my poll. My answer is “other” because I have opened it and used my iPhone to take pictures of the articles in case I


On the protests: The nightmare scenario is that Trump orders the National Guard (can he do that?) to stop the protests using non-lethal force --- that he would even have to add non-lethal force is incredible thought.... but of course this could lead to lethal force from both sides.. Kent State?
Would soldiers who are after, all citizens too, actually using any kind of force against non-violent protests?
Warning signs will come when we learn of his appointments.... that a sherrif -- however unhinged as David Clarke -- is being mentioned to head Homeland Security is appalling. That a mere county sheriff, even from a big city like Milwaukie, without the credibility of even a big city police commissioner like William Bratton (NYC) would even be mentioned to head up Homeland Security is strange, but this man is dangerous.  Read this….