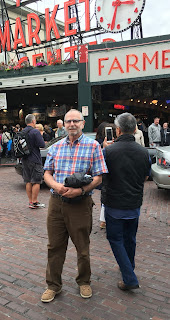 Dallas. I drove from Portland to Seattle to visit an old friend who I hadn’t seen in 30 years. Listening to satellite radio it was all a tape music show from the seventies so there was no news. Once in Seattle, we walked through the amazing Seattle attraction, Pike’s Place Market where I doubt many people knew what was happening in Dallas.

It was a great day spent getting reacquainted and discovering as often happens that our relationship had picked up where it left off and we still could talking about anything.

I left at 5 PM but was caught in heavy traffic for more than four hyper-caffeinated hours trying to stay alert in the rain which made visibility problematic.

When I got hone I called my friend and she told me not to watch the news because it was so awful it would keep me awake half the night.

Of course I couldn’t resist. I turned on MSNBC and saw the all too familiar pictures of police cars with flashing lights and cops huddling behind them with guns drawn.

So I didn’t slept much last night since every time I woke up I checked the TV.

Now there’s no sense writing about the issues about race relations and policing once again highlighted in a terrible way.

Instead I will say that in some ways this is the best talking point for Republicans, who will no doubt figure out a way to blame everything they can twist into a condemnation of Democrats.

On the other hand, it is the worst thing for Republicans, since it will dominate the news for at least a few days, thus taking the focus on Hillary’s “treasonous” emails and how they prove she too reckless and inept to be president.


Thursday, July 7, 2016  I will be on the road driving to Seattle so it’s unlikely I will be able to update this website. Just for now we all need to consider what will happen if enough Republican delegates realize that Trump is just BATSHIT CRAZY and is incapable of controlling his unhinged diatribes so they nominate somebody else. I’m hearing more and more pundits say that the problem is not that he doesn’t want to tone down his rhetoric, it’s that he can’t.
What a nightmare scenario for Clinton who is all set to run against Trump. She’ll need an entirely new game plan for whoever is nominated, be it Rubio, Bush, Cruz, Kasich, Ryan, or somebody else.
Wednesday, July 6, 2016

Here’s one quote from Politico (“Trump goes off on Clinton’s email, Obama’s plane, Saddam Hussein, and just about everything else”) that strikes me as yet another example not only of Trump’s narcissism; but of his vanity, braggadocio, and hedonism. Perhaps, to be compassionate, it may be indicative of what Conor Friedersdorf wrote about in The Atlantic:
The Unnerving Insecurities of Donald Trump

The Republican front-runner claims he “had no choice” but to publicly discuss his anatomical endowments.

In an article describing the speech where Trump got a lot of negative media attention for praising Saddam Hussein he also dropped in a few morsels of psychopathology:


Other topics explored included: Obama’s carbon footprint for flying in an “old” plane (Air Force One), Trump’s ability to phone into television shows, Obama’s golf schedule and proof that Trump did indeed have real hair.


What struck me first was his called Air Force One an “old plane.” The two highly customized Boeing 747’s used as presidential planes are going to be replaced with newer planes. No doubt Trump envisions implementing that into his first 100 day plan, even before starting construction on his decidedly unglamorous wall.

Trump’s “little” Boeing 757 —  you know, the one fitted with gold plated fixtures and seat belt buckles —  is 25 years old, about the same age as the Air Force One 747’s. Upgraded passenger planes in service for 20 years aren’t considered old by airline standards. However the new planes are much more energy efficient.

While the plane called by some “ Trump Force One,” is fitting for a mere low level hedonistic billionaire, it hardly compares to the genuine Air Force One.

Here’s a look at Trump’s plane.

And of course, the amazing Air Force One.


Was the Bill Clinton and Loretta Lynch meeting a brilliant, if devious, ploy to get the email issue over and done with?

Loretta Lynch said that she wouldn’t involve her department in the process which usually follows an FBI investigation. By leaving the decision as to whether our not involve the DOJ in deciding whether or not to prosecute to the recommendation of the FBI, the matter should be decided.

Now that the FBI has announced they didn’t find any reason to prosecute, in retrospect this looks like this

There’s been lots of commentary about the Star of David being used in a Trump Tweet, but I have another take on it. No matter whether or not, consciously or unconsciously, somebody used the symbol so powerful and symbolic to Jews and others to appeal to neo-Nazis and white supremacists, there are other facts that have to be considered.
.
What we heard was denial, especially from the wormy Corey Lewandowski, saying it was merely meant to be a star, or a sheriff’s star. And, in the Trumpian manner, comes a heeping  helping of blame the media deflection.
.
All over the news this morning is that Trump is defending the original post, despite the fact that it originated first from a notoriously racist Tweeter, and then was repost on a racist website. I have yet to hear someone confront a Trump surrogate by directly asking why Trump can’t simply say he is sorry.
.
Admit he or someone associated with him made a mistake? Really, and pigs fly and Shrek is real.
.
About the closest to an apology that has come from the Trump camp is that their deleting the star and replacing it with a circle was enough to show they recognized it was inappropriate. Some Republican on MSNBC just said that everyone in the campaign “regrets that this has happened.” Of course they do! Because it was wrong? No, because they had to do damage control.
.
HERE ARE MY FACTS
.
Fact 1) Many people were offended, and nobody apologized.
.
Fact 2)  “I’m sorry” is something children usually learn early on to say when they’ve done something wrong, whether deliberate or not. If you say something that hurts someone’s feelings, you say that you are sorry.
.
Fact 3) People with narcissistic personality disorder never apologize. They feel no shame.
.
All this brings to mind the most famous line from the Army-McCarthy hearings:


I meant to do you no personal injury, and if I did, beg your pardon.
Let us not assassinate this lad further, Senator. You have done enough. Have you no sense of decency sir, at long last? Have you left no sense of decency?  Special Counsel for the Army Joseph N. Welch.

Your Grandma Needs To Be Smoking Pot

It's going to be pretty hard to keep weed illegal when your grandparents are smoking it to prevent Alzheimer's.
This week scientists found evidence that the psychoactive ingredient in marijuana, tetrahydrocannabinol (THC), may be able to remove the buildup of a toxic protein linked to Alzheimer’s. It’s good news for the fastest growing group of marijuana users—seniors—and gives those above the age of 50 who haven’t come out of the pot closet a good reason to do so.  LINK
Or for the scientific among us:
Article | OPEN

The beta amyloid (Aβ) and other aggregating proteins in the brain increase with age and are frequently found within neurons. The mechanistic relationship between intracellular amyloid, aging and neurodegeneration is not, however, well understood. We use a proteotoxicity model based upon the inducible expression of Aβ in a human central nervous system nerve cell line to characterize a distinct form of nerve cell death caused by intracellular Aβ. It is shown that intracellular Aβ initiates a toxic inflammatory response leading to the cell's demise. Aβ induces the expression of multiple proinflammatory genes and an increase in both arachidonic acid and eicosanoids, including prostaglandins that are neuroprotective and leukotrienes that potentiate death. Cannabinoids such as tetrahydrocannabinol stimulate the removal of intraneuronal Aβ, block the inflammatory response, and are protective. Altogether these data show that there is a complex and likely autocatalytic inflammatory response within nerve cells caused by the accumulation of intracellular Aβ, and that this early form of proteotoxicity can be blocked by the activation of cannabinoid receptors. CONTINUED
Saturday, July 2, 2016
What’s wrong with this picture?

I didn’t read the 800 page Benghazi report but someone did, give me a break, Gowdy wanted people to print it out…
In one sentence:
The internal documents don’t prove evidence of a scandal, but they do show an administration reflexively concerned with the politics of a national security emergency.

Friday, July 1, 2016
Quote of the day: “Donald Trump is like the ball in a pinball game.” Stuart Evans on the Lawrence O’Donnell show on MSNBC.
Evans wrote a book about a president similar to Trump, except he never could have imagined a president as batshit crazy as Trump.

A few years ago I started noodling on a novel that I hoped would expose the fault lines that seemed to be splitting our politics. My thought was to take reality and push it to the edge both for comic affect and to offer up a cautionary tale of where our politics might be headed. I finished the book in the summer of 2015 and I was a little worried that I had gone too far. How believable would it be that a xenophobic Republican who wanted to ban immigration and deport millions might actually be a real contender for president?
Well, now we know. Donald Trump hasn’t called for a new Bill of Rights like Armstrong George, the handsome fire-breather in my novel, The Innocent Have Nothing To Fear, but he’s the first candidate who’s running as if the Bill of Rights doesn’t exist. (If we get through this election without some reporter asking Trump if he can name the amendments in the Bill of Rights, it will be a crying shame.) Even while channeling my darkest impulses—and Lord knows we all have them, which is probably the key to Trump’s success so far—it never occurred to me that a candidate for president of the United States of America could call for a religious test to enter the United States without being considered a frothing lunatic. Continued on Daily Beast