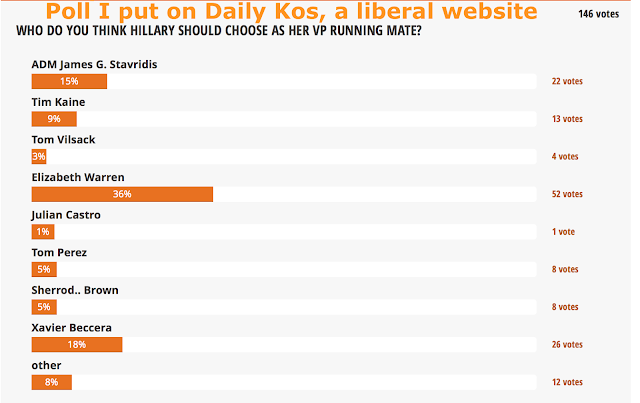 While Kaine and Vilsack, who seem to be on the top of the speculation list at present, are good choices they don’t seem to add much to the ticket. They are hardly household names.
That brings me to Admiral James G. Starvidis. To say he’s not a household name would be the understatement of the year. But that should hardly matter because of the appeal he would have to so-called suburban soccer moms currently wavering in who to vote for.
Trump is stirring up a panic in many of them, and will continue to exploit their fears that only he can protect them from threats, be they homegrown or overseas.
ADM James G. Stavridis adds something to the ticket that Trump doesn’t have. The medals on the admiral’s chest actually mean something.


There is no filter from brain to mouth with Trump - which in one way is a good thing because despite all the pressure to appear presidential which we can assume is coming from the sane people close to him, he either can't or won't heed their advice. I lean towards “can’t.”
We know there’s pressure to rein in the inflammatory positions which he will occasionally heed, witness his shift regarding no longer banning all Muslims from coming to the United States. But off the cuff he still can’t control himself. (See latest news on Muslim ban.)
I want Trump to keep revealing that he’s not only hateful and hate-fueled, but that he’s unbalanced.  If he does this, that’s the good news.
The unhinged true self of Trump being repeatedly revealed will hopefully convince sensible Republicans not to vote for him. Unfortunately, the media is complicit in buying into the probability that Trump can morph into a new being, and actually become “presidential” or as I would put it, a person without ingrained mental pathology.
The bad news  obviously is that he could become president - a hatefilled and hate-fueled narcissist is bad enough, but a president who can't self-regulate and is also showing more and more that he is (at the least) showing traits of paranoid personality disorder .... look at it this way.... combine the former Nazi Dr. Strangelove and the manic paranoid General Jack D. Ripper and we have President Trump.
Many people will but the cynical attempt to use the recent news to scare people into voting for Trump. What evil genius came up with the new slogan “Make America Safe Again?” It fits right in with “Make America Great Again” and “Law and Order President” was already used by Nixon.

So, as a refresher….
Paranoid personality disorder is characterized by a pervasive distrust and suspiciousness of others such that their motives are interpreted as malevolent. This usually begins in early adulthood and presents in a variety of contexts, as indicated by four (or more) of the following:
If enough the majority of American voters want a president who believes in what they believe in, and don’t care that he is a hedonistic narcissist, and are too blind and stupid to see that he is mentally unbalanced, then we will elect a president who is also a batshit crazy paranoid.
Related: Ethics, Shrinks, and Trump: Should they speak out?

at July 19, 2016
Email ThisBlogThis!Share to TwitterShare to FacebookShare to Pinterest