I read this article in RAWSTORY - it was the inspiration for today's blog. 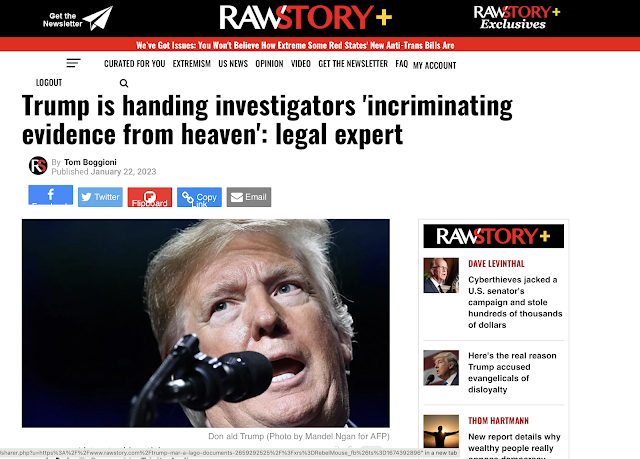 Donald Trump's inability to stop talking about his legal problems, and his penchant for floating possible defenses on his social media accounts, will likely come back to haunt him, explained one legal expert.

During an appearance on MSNBC early Sunday morning, former Army prosecutor Glenn Kirschner was asked by host Katie Phang about the former president's inability to keep quiet while he is under multiple investigations.

For Trump, "talking" means posting on Truth Social. Whether he actually speaks out loud or types when he makes these posts remains to be reported, but it hardly matters.

I have little doubt that Manhattan DA Alvin Bragg, Fulton County, GA DA Fani Willis , DOJ Special Counsel Jack Smith, and NY State AG Leticia James have staffers monitoring all of Trump's Truth Social posts in real time and taking screenshots of them lest he decides to remove them.

Trump's mental health has been progressively deteriorated ever since he lost the election. As much as he psychologically denies the legal jeopardy he's in and his losing his position as the unquestioned Demi-god of the GOP it has to be roiling around somewhere in his psyche.

He's a self-involved megalomanic and malignant narcissist whose modus operandi to being attacked of disrespected even in fairly mild way is to escalate to a DefCon 1 level counter-attack.

Narcissistic rage can be defined as intense anger, aggression, or passive-aggression when a narcissist experiences a setback or disappointment, which shatters his (or her) illusions of grandiosity, entitlement, and superiority, and triggers inner inadequacy, shame, and vulnerability.

Examples of narcissistic rage range from intense outbursts and sudden fits of anger, to passive-aggressive acts such as simmering resentment, icy silence, deliberate neglect, or cutting sarcasm. What distinguishes narcissistic rage from normal anger is that it is usually unreasonable, disproportional, and cuttingly aggressive (or intensely passive-aggressive), all because the narcissists’ wants and wishes are not being catered to. It is a blow to their superficial, idealized self-image. Reference

He behaves like a child who has problems with impulse control who is having a temper tantrum when he doesn't get his way. Once a tantrum starts there's a point of no return where the child, or adult in people like Trump, is no longer considering the negative consequences.

There was a time when Trump felt, with some justification, that he owned Twitter. Trump posted more than 56,571 tweets before he was banned from Twitter.

After the FBI raid on Mar-a-Lago Trump made over 50 posts (he calls the "truths") in one day.

The former president has written a total of 51 "truths" on the social media platform he set up after getting permanently banned from Twitter, while also sharing dozens more posts from other accounts since early Tuesday morning.

Among Trump's Truth Social posts were attacks on the FBI, including one alleging the agency told Facebook the Hunter Biden "laptop from Hell" story was Russian disinformation "when they knew very well that it was not."

Trump added in the Tuesday night post that the "fake statement" from the FBI changed the outcome of the 2020 election by "millions of votes, and it was by no means the only corruption which took place." NEWSWEEK

One of the difficulties in prosecuting some cases is the "he said, she said" conflicting testimonies of eye witnesses. If there's no recording of a conversation it can often be left up to a jury to decide whether to believe the witness or the defendant.

In this age of social media a post has become the equivalent of the spoken word. All Trump can do to deny something that was posted of Trump Social is to claim someone else made the post.

This claim would ring hollow in front of a jury. It would be a version of a kid telling his teacher that "the dog ate my homework" and expecting the claim to be believed.

As I finish up today's blog I checked in with my favorite breaking news website, RAWSTORY, and this was on top of their page: 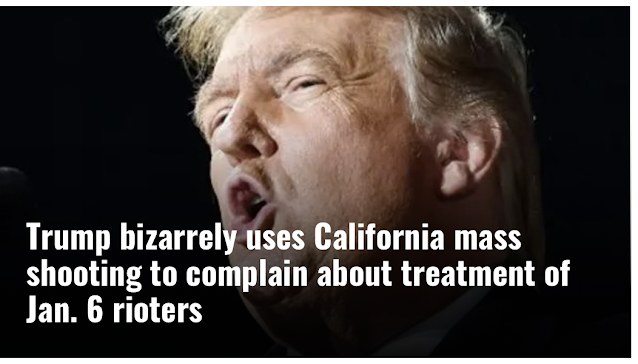 Early Sunday morning Donald Trump reacted to the mass shooting in Monterrey Park, California that claimed at least ten lives by tieing it to the treatment of those who have been indicted or convicted for participating in the Jan 6 insurrection...

Taking to his Truth Social account, he began, "10 dead in California shooting, horrible gun wielding ANTIFA protest against our great police in Atlanta - Nothing will happen to them despite night of rage and destruction."

That was followed by, "Yet our January 6th protestors, over a Rigged Election, have had their lives ruined despite nobody killed except true Patriot Ashli B."

"This situation will be fully rectified after 2024 Election. Thank you!" he concluded.

Note that the article has a link to the story that prompted be to write this blog. Screengrab below: 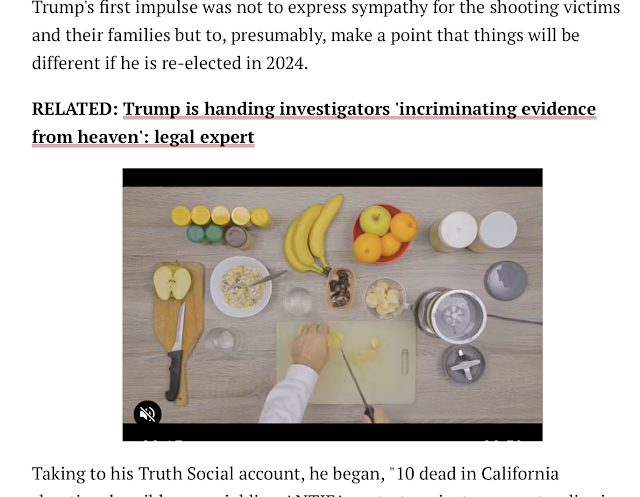 Thanks, Trump, for making my case!

About me
edit
The Cranberry era
edit

at January 22, 2023
Email ThisBlogThis!Share to TwitterShare to FacebookShare to Pinterest