False Equivalence: Biden and DeSantis have put aside being nasty to each other

False Equivalence: "Biden and DeSantis have put aside being nasty to each other"

For President Biden it is sincere, for Gov. DeSantis it's all about optics.

Scroll down to read stories that piqued my interest today

Someone on MSNBC was describing President Biden and Gov. DeSantis talking on the phone about the devastation of the hurricane and the need for federal assistance showed that people can put aside their nastiness basically for the common good.

Biden, DeSantis put politics aside with Hurricane Ian bearing down

EXCERPT: After talking to Biden, the governor went on air with Fox News’s Sean Hannity and lauded the administration’s response to the hurricane so far.

“When people’s lives and their property are at risk like this, we all need to work together regardless of party lines,” DeSantis said. “It’s my sense that the administration wants to help.”

Oh come one! Of course when there's a disaster presidents and governors of opposing parties work together even if the are worse than rivals, even when one of them has an easy going personality and is slow to anger and the other has a nasty streak as wide as the white stripe on a skunk and is just as eager to spray his stink on anyone or any group that he wants to hurt.

It is breaking news when President Biden expresses anger, for example:

Angry Biden Screams: ‘I Don’t Want to Hear Any More of These Lies About Reckless Spending!’

It stuck me that Biden and DeSantis would eschew being nasty to each other because of the devastation of hurricane Ian was an outrageous false equivalence.

Biden has been excoriated by Republicans but it's never been for being a nasty man. DeSantis... well his stock in trade is being nasty to the core.

This is the last time Biden and DeSantis were pictured meeting together. It was following another catastrophe. 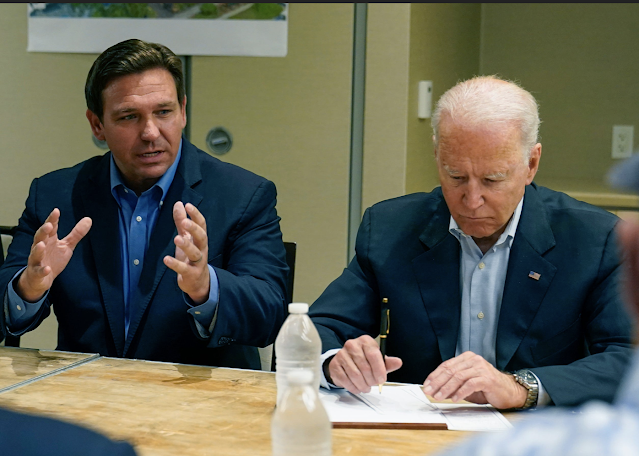 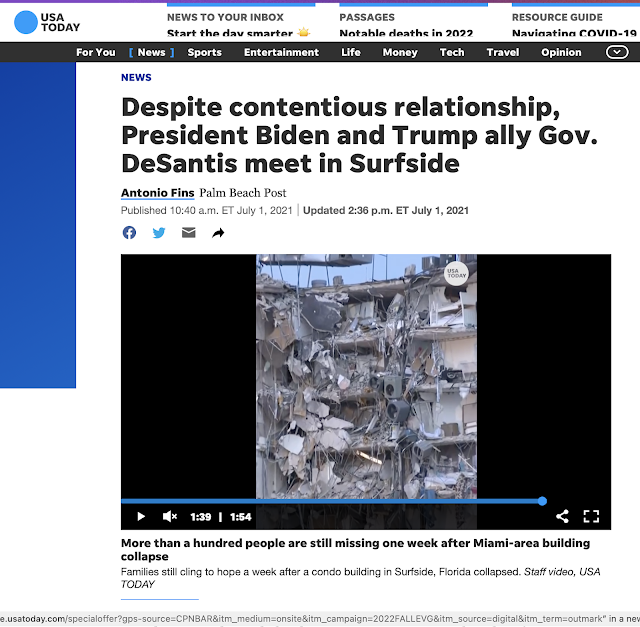 3. Shaky relationship for DeSantis and Biden

DeSantis and Biden have had a contentious relationship. Just a week into the new president's term, DeSantis called "disingenuous" White House Press Secretary Jen Psaki’s claim that Florida had not doled out more than 50% of its vaccine supply. A month later, DeSantis called "absurd" and "unconstitutional" reports that the White House was mulling domestic restrictions for states, like Florida, where there was, at the time, a rise in COVID cases.

Since the Surfside building disaster, the Biden-DeSantis relationship has been publicly cordial and all business. The two men spoke the day after the structure's collapse and discussed the "heroic" efforts of emergency workers. That discussion followed the Biden administration's issuing an emergency declaration for Miami-Dade County. DeSantis has also been holding daily joint briefings in Surfside with a Biden ally in Miami-Dade County, Democratic Mayor Daniella Levine Cava.

The USA article reminds us of the last time a Democratic President hugged a Republican governor during a crisis.

Bipartisanship aside, don't expect a Biden-DeSantis embrace. A hug is the lasting image of the last time a Democratic U.S. president was greeted in the state by a Republican Florida governor during an emergency. That is when then-President Barack Obama and then-Gov. Charlie Crist met in Fort Myers in 2009. Democrat Obama came to Florida to pitch a $787 billion stimulus plan. Crist, the state's Republican governor at the time, greeted Obama in a spirit of bipartisanship.

According to Crist, the two shook hands and then Obama leaned in to give him a hug that Crist later said wasn't anything "special." In 2014, Crist, then running for governor as a Democrat, wrote a first-person account of the encounter for Time magazine in which he said: "I didn’t know it yet. But that high-spirited day in Fort Myers—meeting Obama (bad enough) and greeting him with a hug (even worse) — ended my viable life as a Republican politician. I would never have a future in my old party again. My bipartisan hopes and dreams, I would discover soon enough to my shock and disappointment, were vastly overstated and hopelessly out of date."

President Biden will go to Florida. He will meet with Gov. DeSantis and there will be photos of them both looking concerned and all business.

There will be no hugs. 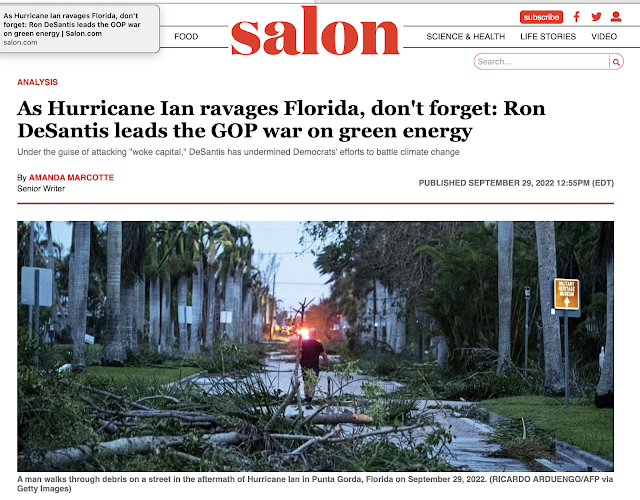 I won't even click on this or provide you with a link to right-winger Thiessen's Washington Post column. 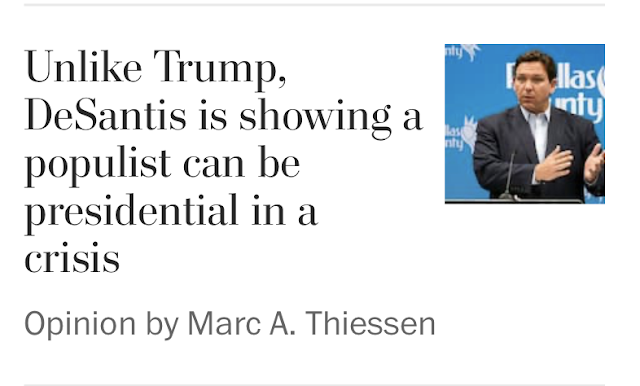 All DeSantis is showing is that he can play act a being presidential, or in this case acting like a governor ought to act in a disaster. In between tormenting and traumatizing migrants and demonizing the LGBT+ community of Florida he can put aside the persona that has rightfully earned him the Twitter hashtag of DeSatan. 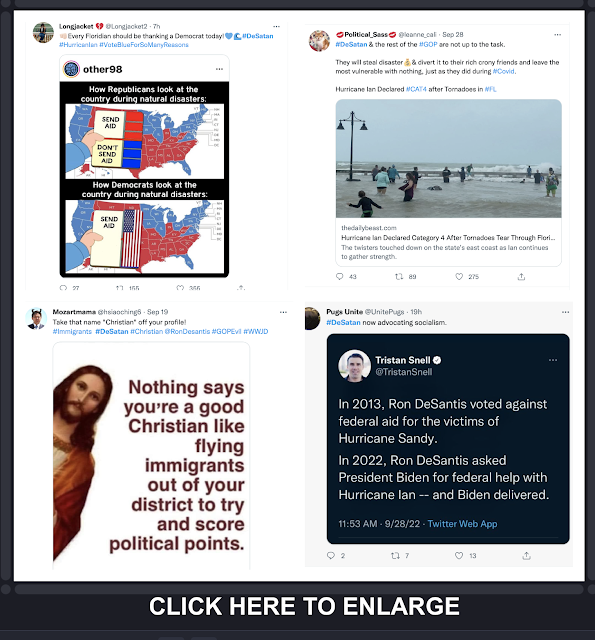 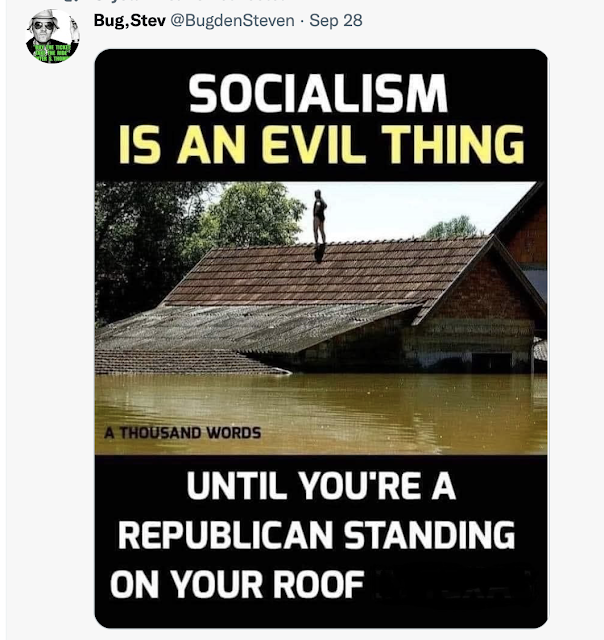 Other news that piqued my interest today.

The Supreme Court Returns on Monday, Stronger and More Terrible Than Ever

This term, the high court will cement its grip on political life in America, overturning affirmative action and other critical protections along the way. 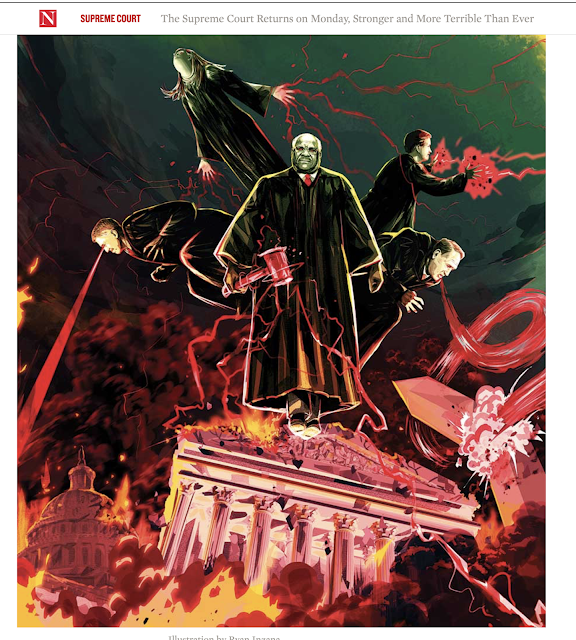 Obviously this isn't the biggest news story of the day but I'd be a liar if I said I wasn't pleased to read this. I doubt we'll hear the real reasons for this anytime soon. 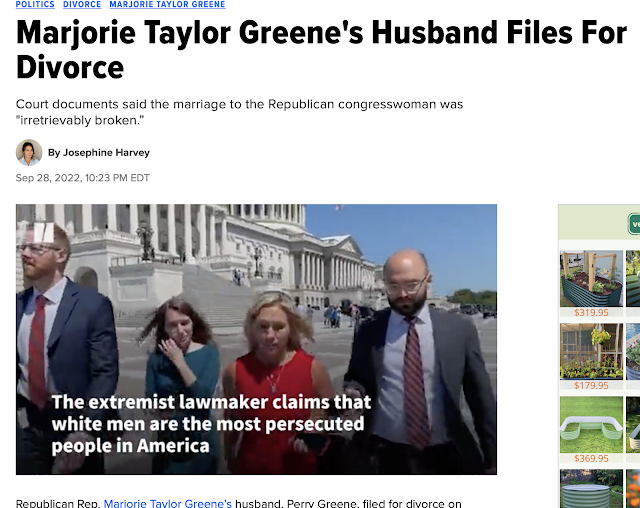 There's not much available online about husband Perry Greene. This is what I could find from this website: 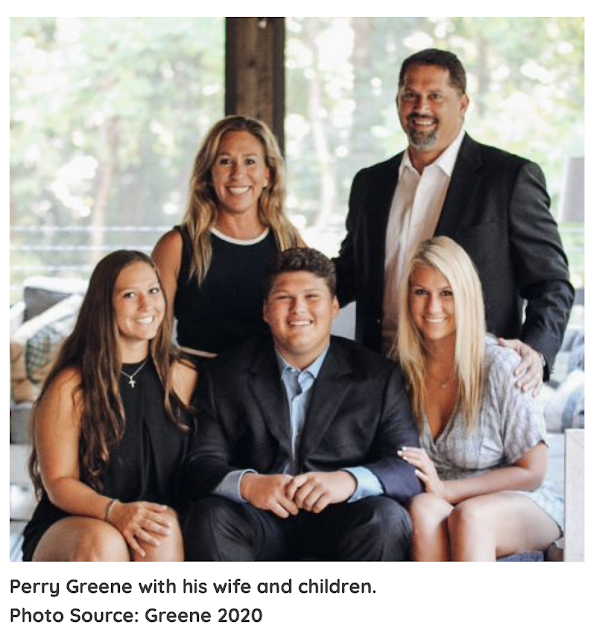 Speaking of Perry Greene’s academics, he went to the University of Georgia’s Terry College of Business. He graduated with a bachelor’s degree in accounting from there back in 1996.

Net Worth and Career Details of Marjorie husband, Perry Greene

The 48-years-old, Perry Greene is estimated to hold an impressive net worth of $2 million as of 2020. Indeed, he is a millionaire; however, not only him but his better-half, Marjorie also hold that tagline. It is believed that her fortune touches $4 million.

at September 29, 2022
Email ThisBlogThis!Share to TwitterShare to FacebookShare to Pinterest