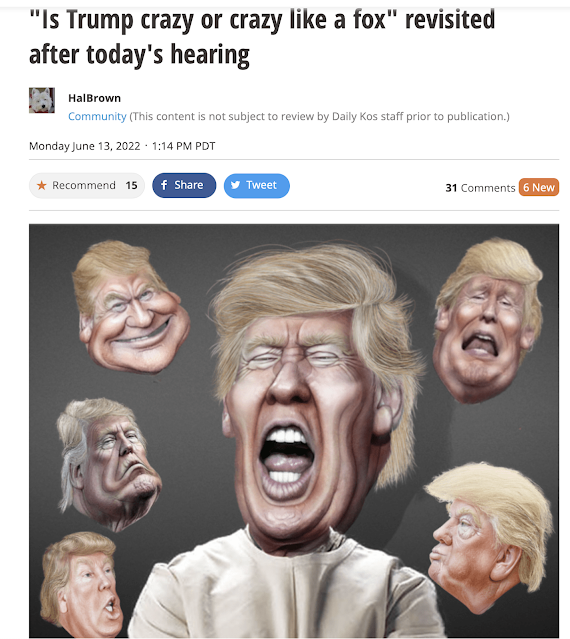 For those of you who watched the hearing this morning I pose a question which I and others have asked before: is Trump crazy or is he crazy like a fox.

.
This morning if you watched the J6 hearing you saw a video of Williams Barr saying Trump was not a rational person.
.
He said that if Trump truly believed the things he was saying then he was “detached from reality."
.
Not being able to tell what is real from what isn’t is a hallmark of several severe mental disorders or conditions.
.
Today Rep. Jamie Raskin said Trump either knew he was lying or was mentally incapacitated. (Read article)
There has been a lot of debate about whether Trump is crazy or crazy like a fox. I think there is fairly uniform agreement that early in childhood her developed into a malignant narcissist. It would fit that if he had so much, really just about all, of his identity tied up in his grandiose self-identity that when he lost the election he suffer something he’d never experienced. This is called a narcissistic injury. This is how Wikipedia describes it:

A narcissistic injury is also known as "narcissistic wound" or "wounded ego" are emotional traumas that overwhelm an individual's defense mechanisms and devastate their pride and self worth. In some cases the shame or disgrace is so significant that the individual can never again truly feel good about who they are and this is sometimes referred to as a "narcissistic scar".

This was published in The Week in 2017: Is Trump crazy or crazy like a fox?

You're not taking crazy pills. The president and a distressingly large number of people around him regularly say things that sound quite literally insane.

I don't mean neurotic. The president and his advisers don't appear to suffer from anxiety disorder or depression. I'm not even talking about the severe narcissism that every commentator and armchair psychotherapist discerns in Trump's self-absorbed, needy, vindictive tweets and other public pronouncements. I'm talking about something far more serious: clinical psychosis — an incapacity to distinguish between fact and fiction, reality and illusion.

In The New York Times in their regular Conversation column on Dec. 15, 2017 Gail Collins and Bret Stephens discussed the question: Is Trump Crazy Like a Fox or Plain Old Crazy?

Gail Collins: Bret, I’ve had a lot of these conversations over the years, but I cannot remember ever starting one by asking whether you think the president is off his rocker. In the real, mentally ill sense.

Bret Stephens: Um, was he ever on his rocker, Gail?

Look, I’ve gone back and forth on this question. If you look up old interviews he conducted 20 or 30 years ago (check out this video of his testimony to a congressional committee in 1991), what you find is a much more coherent thinker and verbally acute speaker than the man he is today. I’m not expert enough to say at what point mental decline slides into senility or dementia, but there’s clearly been a decline.

I wrote this almost exactly a year ago:

The question of whether Trump is crazy or crazy like a fox is not new. What is new is that since his election loss there is evidence that he actually now meets the criteria for having a psychiatric disorder or at least a condition where delusions are a prominent feature.

Is Trump crazy, i.e. Marjorie Taylor Greene QAnon or Lin Wood (who believes the earth is flat — see story) crazy or is he crazy like a fox who is a master manipulator?  Or, is he something in between?

Posted by Hal Brown at 7:36:00 PM
Email ThisBlogThis!Share to TwitterShare to FacebookShare to Pinterest