Stories that piqued my interest today on bottom of page

There are several aggregate non-partisan websites to choose from so you don't have to click on individual websites to keep up with news as it breaks and the best opinion stories of the day.

Update from RawStory staff on Twitter where three of their writers react to my tweets: 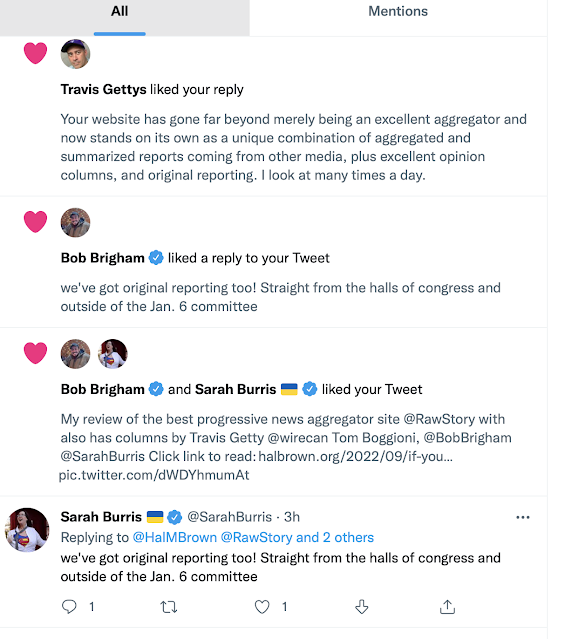 As these RawStory journalists (above) remind me they indeed do have original reporting! The website has gone far beyond merely being an excellent aggregator and now stands on its own as a unique combination of aggregated and summarized reports coming from other media, opinion, and original reporting.
---------
While I look at Google News, have several keyword Google News email notifications enabled, and subscribe to Yahoo News, and have friends who are satisfied to use Facebook in this way, my preferred website as a liberal is RawStory.
This is a highly partisan progressive website. The website acquired a similar website, AlterNet, in 2018. Recently they also began to cross publish stories which were originally published on Salon and Salon posts some original RawStory articles.
RawStory publishes original opinion pieces by senior editors Travis Gettys, Sarah Burris, Bob Brigham, and Tom Boggioni. While not as well known as other opinion columnists from major media like The New York Times and The Washington Post, and progressive websites like Salon, they are just as good. What they lack by way of columnists is someone as adept as writing satire as Dana Milbank (Wash. Post) and Heather "Digby" Parton (Salon). I'd also like to see them have an editorial cartoonist, it would be great if they could publish someone as good as Ann Telnaes from the Washington Post.
They also have staff reporters like Matthew Chapman and  Jordan Green who covers extremism. Green spent 16 years writing for alt-weeklies and freelancing for the Washington Post and other publications (his story today). 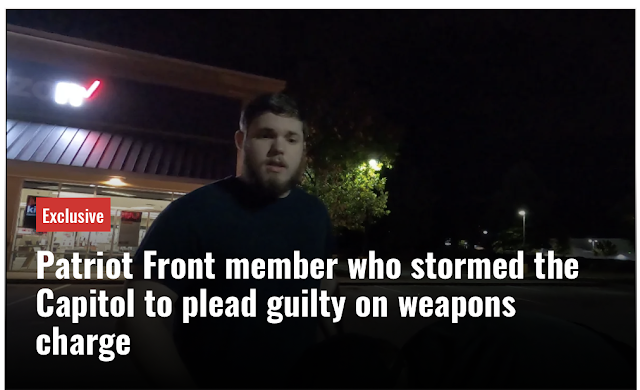 One of the benefits of RawStory is that they are more than a aggregator because it summarizes articles from other websites with enough excerpts so you get the gist of the story and explanations of the main points of the articles, and then they provide a link to the article. This enables you to follow articles on websites to which you don't have a subscription.
Another plus of RawStory is that they have a comments section. It previously used Disqus, but now they use their own comment platform. Once you register or sign in with Facebook or Google it is easy to post your comment and you can even include images. When you post an image it makes your comment stand out. Because they don't have between 1000 and 3000 comments like some stories in The New York Times and The Washington Post (both subscription websites) you will often find more give and take between a smaller number of commenters. If you want to make a comment to a story they write about which for example, appeared on Daily Beast or Salon which don't allow comments, you can post one on RawStory or just read what other comments had to say.
Last, but certainly not the least benefit of RawStory as a aggregator of breaking news of interest to progressives is that they manage to get their story online very rapidly. For example within an hour after something is discussed on an MSNBC show RawStory reports on it with a link. For example reporting on a segment from Morning Joe: 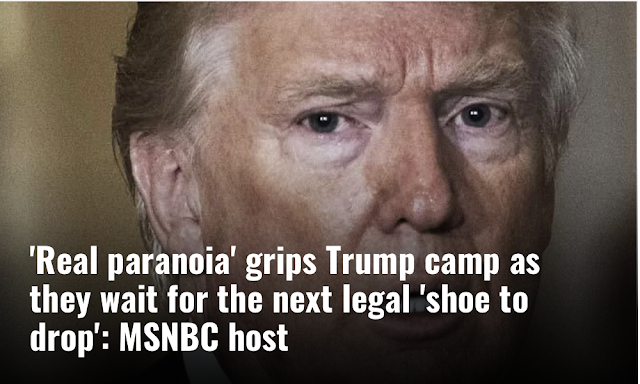 The only fault with RawStory is that in their rush to get a story online they occasionally make minor typos. This is easy to do when you don't have a proofreader so I forgive them. Since I read it so frequently I send in corrections so I suppose I am at least one of their unofficial proofreaders. It is to their credit that they not only fix the errors rapidly they also send me a personal email thanking me. 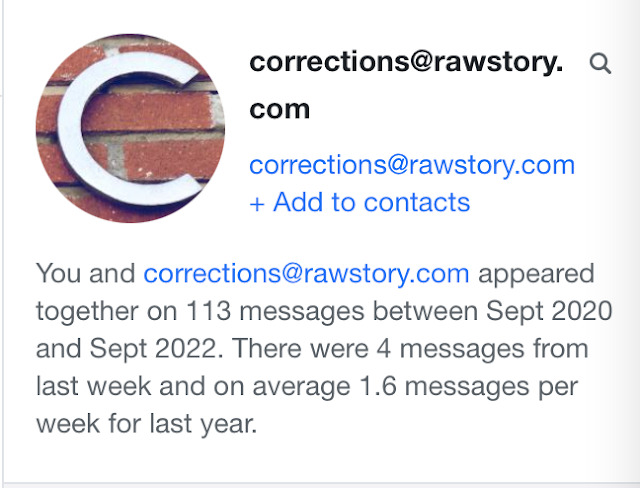 Here's the Wikipedia page on RawStory.
If you read the Wiki page you'll see that the website isn't perfect. They have made mistakes. Also this is from Media Bias Factcheck.

In review, Raw Story is primarily a news aggregation site that aggregates news from AFP and Reuters. Raw Story also summarizes information from other sources such as this: “Irate customer drags salon owner 50 feet to her death after running out on manicure without paying.” Infrequently, they publish original stories such as this: Trans activists detained in Arizona and threatened with deportation due to bureaucratic catch-22. Raw Story consistently utilizes strong, emotionally loaded headlines such as “Trump insists border wall will be ‘all concrete’ — except where it’s ‘see-through’: ‘Makes sense to me!’” and “MSNBC’s Morning Joe mocks ‘confused’ Trump over shutdown boasts: ‘Voters are blaming him.’”

Raw Story generally sources credible media outlets such as the Washington Blade, Las Vegas Review-Journal, and the St. Louis Post Dispatch. Generally, story selection always favors the left and frequently has an anti-Trump tone. Raw Story has published misleading articles promoting miracle cures such as this: Scientists discover virus that kills all grades of breast cancer ‘within seven days.’ This headline is misleading, as, within the article, they clearly state, “but not in normal mammary epithelial cells.” Regarding consensus science, they sometimes promote anti-GMO propaganda; however, they also publish credible, scientifically sound information.

Overall, we rate Raw Story Left Biased based on story selection that favors the left and Mixed for factual reporting due to half-true, false, and unproven claims, as well as the promotion of mild pseudoscience misinformation. (5/15/2016) Updated (M. Huitsing 08/10/2022)

I suggest using good sense when reading stories that report on things that seem almost too good to be true if you're a progressive. Use due diligence in following up to see if the same story is being reported independently by other media known for scrupulous fact-checking.
I compared RawStory with Daily Kos on a review website called sitejabber.   Daily Kos is the site which banned me after I posted over 1,700 stories there. I tried not to engage in sour grapes and be objective in my review:

I find Kos pales in comparison for aggregating political news article published elsewhere along with excerpts to RawStory. The later recently added original articles. The pluses are that Kos allows anybody to post their own stories, called diaries, and that there's often thought provoking discussing in the comments. The minus is that community posted stories rarely include original material and opinion, in fact they don't even have an opinion section like major newspapers. For my take on why my story got me banned, with the story removed from the site, without any reason sent to me, can be found if you Google my name, Hal Brown, and a keyword like Daily Kos or Trump. That will get you to my blog.

I do not find Daily Kos to be a particularly useful site for political news or opinion.There are better websites to do this with. If you want to post your own material it is the only liberal website I know of where any registered member of what they call their community can do so and potentially get up to 2000 readers and over 200 comments as I did a about a dozen times with my over 1,700 posts there before I was banned without them letting me know why.

Stories that piqued my interest today: 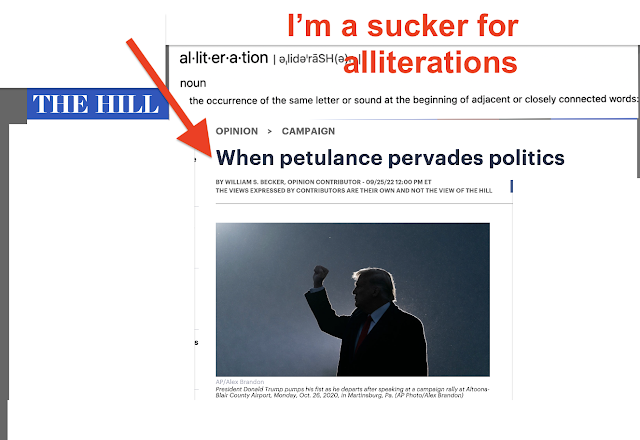 I adore alliterations. I am a wee bit ashamed to admit that I have been known to use the thesaurus to build on an initial idea with only three or four words. For example in describing Trump using a magic wand to declassify top secret documents I wrote he was a flying fat fatuous fantasy flailing fairy.
--------

Main points from Washington Post Column on possible Russian use of nukes: 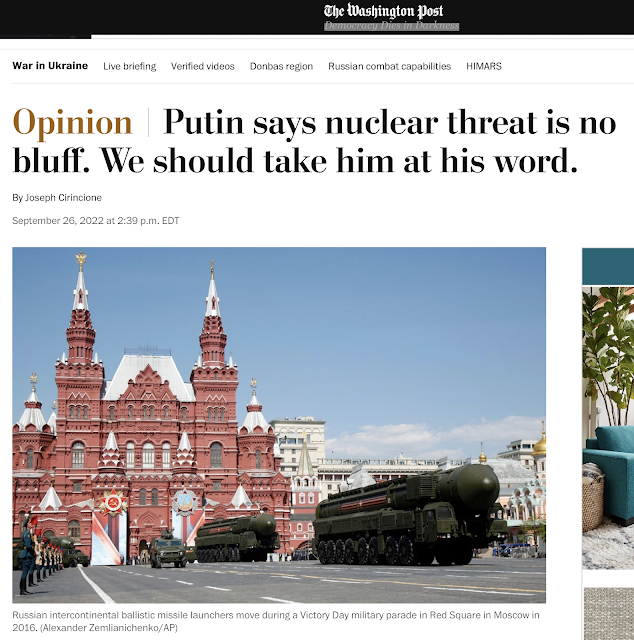 Demonstration shot over uninhabitated area- least likely because it wouldn't be shocking enough.

This explosion would not require a nuclear response by the United States. To prevent further escalation, President Biden could call for Russia’s international isolation (China and India, for example, would quickly distance themselves), impose extraordinarily harsh new sanctions and issue warnings of grave consequences should Russia proceed with additional explosions.

Low-yield weapon. Russia could fire a “low-yield” nuclear weapon on a Ukrainian military target. The explosion would kill hundreds or thousands and cause significant damage.

This might be the most likely scenario. Again, it would not require a “response in kind” by the United States, though some would urge that. The likely response, in addition to those in scenario one, would be massive increases in military aid to Ukraine and possibly concerted NATO or U.S. strikes on the Russian units that launched the attack.

Large-yield weapon. Putin could dial up the explosive force of the attack to the 50- or 100-kiloton range, or about three to six times the Hiroshima bomb.

This would almost certainly trigger a direct U.S. or NATO response, though not likely nuclear. The United States and NATO have sufficient precise, powerful conventional weapons that they could use to devastate Russian forces in Ukraine and command headquarters, including those units responsible for the attack. This would likely be accompanied by large-scale cyber operations.

Nuclear attack on NATO. This is the least likely scenario. Russian first-use doctrine includes the option of striking NATO targets.This could trigger a nuclear response. Some would argue a limited nuclear counterstrike was necessary to preserve nuclear deterrence. More likely is an all-out conventional assault to try to eliminate either Putin himself or the weapons he commands before he strikes again.

These are horrible scenarios to consider. If you are worried, you are having the appropriate reaction. We should do all we can now to prepare a massive political response that might deter Putin from crossing the nuclear line.

I have a negative opinion about Daily Kos since I think I am justified in believing they unfairly banned me for a story I posted there without ever letting me know why or giving me a chance to appeal. I wanted to check out if I was still banned, something I could do just by clicking on a story to see if I could make a comment. I couldn't, so I know I am still banned. I noticed that they are tracking how many times I click on a story and asking me for a donation. I consider this crass chutzpa even if it is done automatically. I certainly won't be donating to them and will refrain from clicking on any of their stories.
Posted by Hal Brown at 6:27:00 AM No comments:
Email ThisBlogThis!Share to TwitterShare to FacebookShare to Pinterest
Labels: RawStory

Words that jumped out in Jennifer Rubin's column

Words that jumped out to me in Jennifer Rubin's column

Stories breaking through the day that piqued my interest are on the bottom of the page.