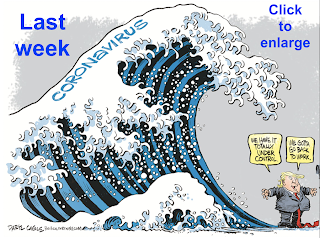 (click cartoon above to enlarge, LINK TO STORY) This is an internationally read blog  with original essays and my  opinions on news stories that pique my interest. My Bio; also Internet search for Hal Brown and Trump
Oct. 5, 2020 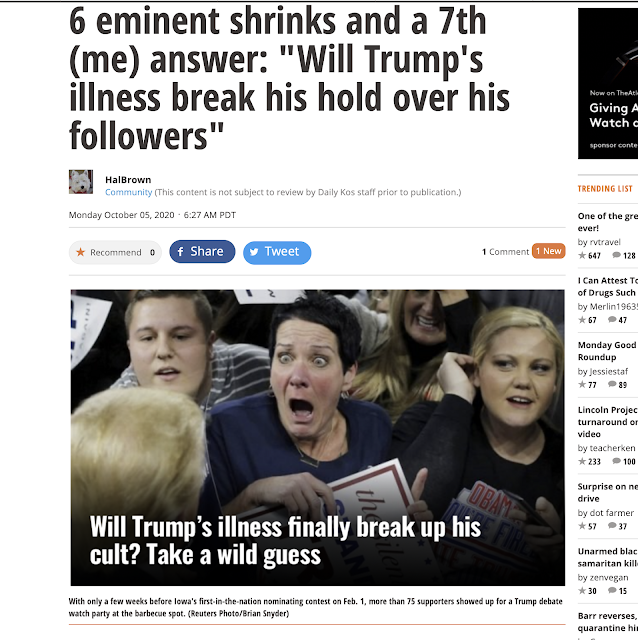 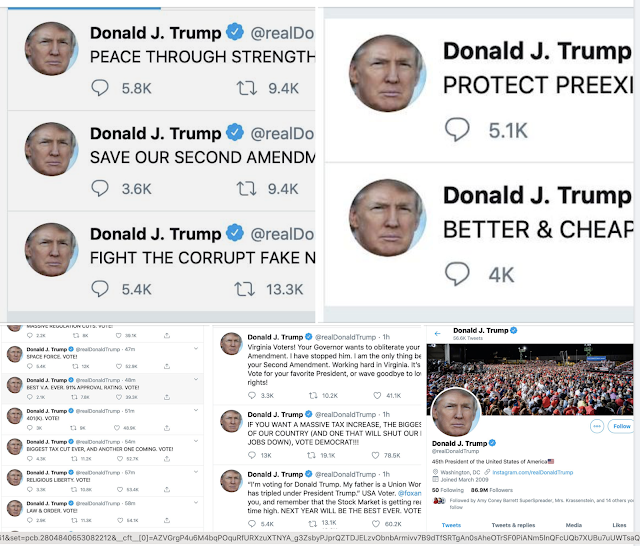 Just reported, he's tweeted 18 times so far this morning.  Trump goes on all-cap rage attack at Democrats in 3 AM tweet from hospital 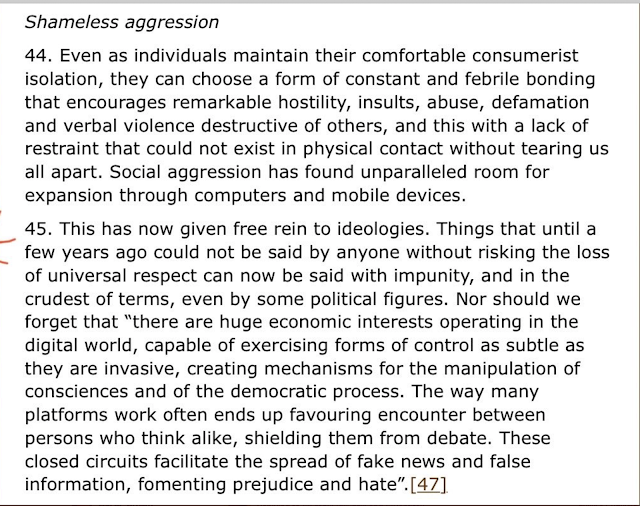 ... Trump told a rally of his fans in Minnesota that Biden would “inundate your state with a historic flood of refugees.”

He whipped up the crowd by saying that Rep. Ilhan Omar (D-Minn.), a naturalized American born in Somalia, wants to tell “us how to run our country — can you believe it?”

In response, Trump’s fans roared: “Lock her up!”

Last year, Trump said Omar and the three other non-white Democratic congresswomen known as “The Squad” should “go back” to the “crime infested places from which they came” — even though they are all American citizens, have all sworn allegiance to the Constitution and, with the exception of Omar, are all American-born.

When Trump was criticized for those comments last year he said he does not have “a racist bone in my body.”

But The Squad’s most famous member, Rep. Alexandria Ocasio-Cortez (D-N.Y.), shot back on Twitter that Trump may not have racist bones but “You have a racist mind in your head, and a racist heart in your chest.”

“The president is in the hospital with a disease known to kill people,“ Jennings said. “Mike Pence’s health and security is paramount.”

Although Pence and his wife Karen have repeatedly tested negative since Trump first announced his positive diagnosis early Friday, the vice president was around at least eight people who tested positive for Covid-19 after attending a White House Rose Garden ceremony where Trump unveiled his Supreme Court replacement for the late Justice Ruth Bader Ginsburg. 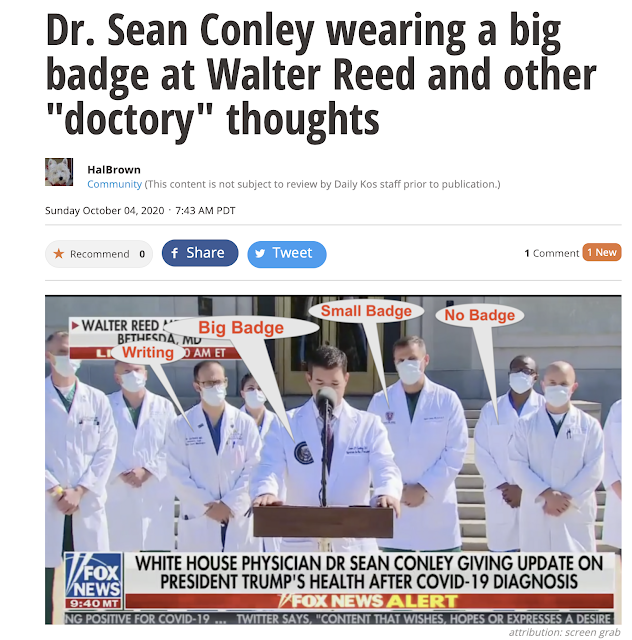 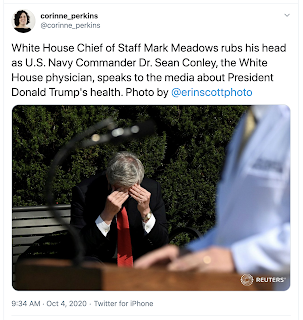 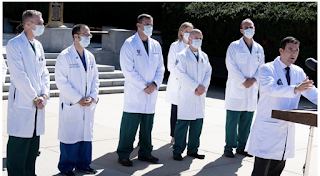 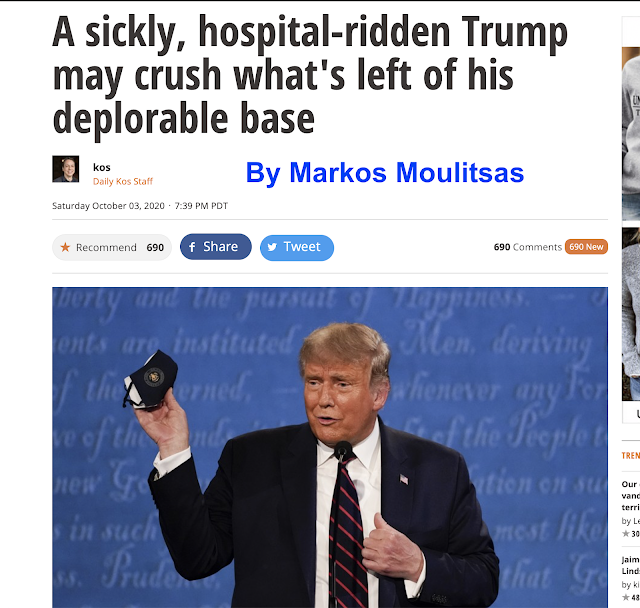 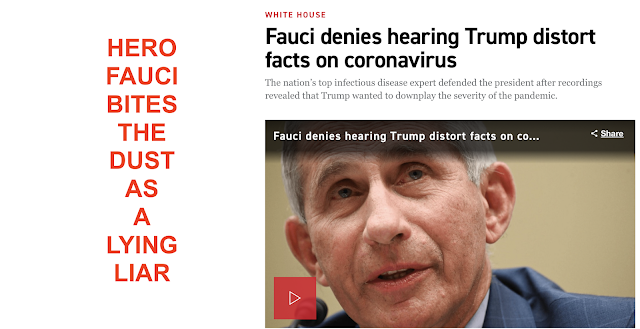 More: House Probe into Trump’s COVID-19 failure shows ‘unprecedented, coordinated’ political interference ( I guess all of this slipped by Dr.Fauci) 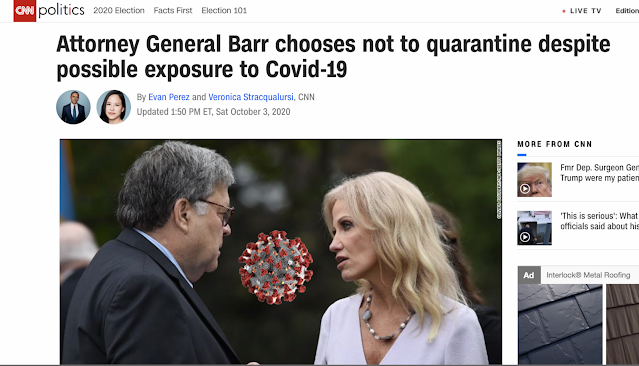 You may want to consider begrudgingly giving him some credit for the level of delusional thinking which may exceed even the president's. He may believe that he has even more power than Trump to beat the virus even after he was inches away from so many people who subsequently tested positive.
Good summary of the Vanity Fair article, which is a fee site: 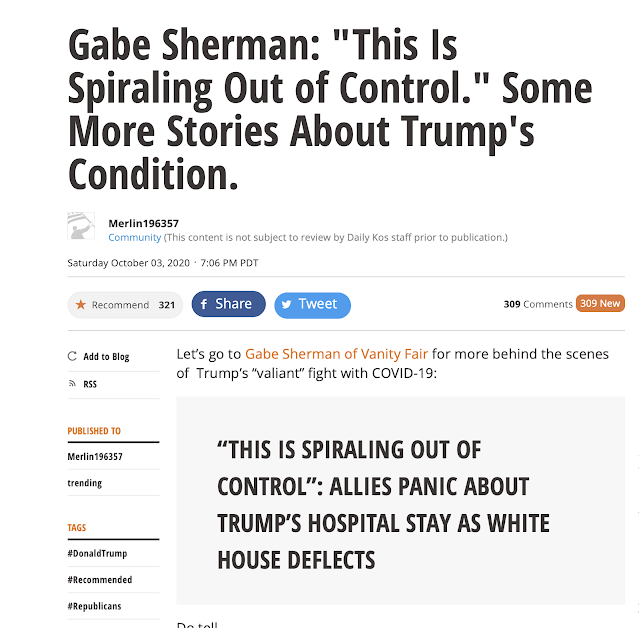 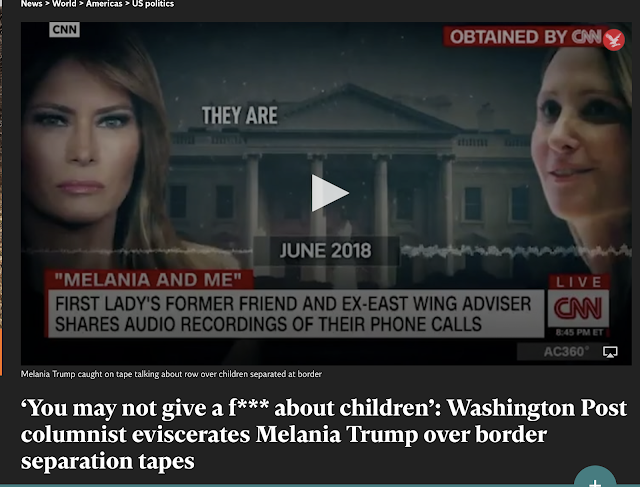 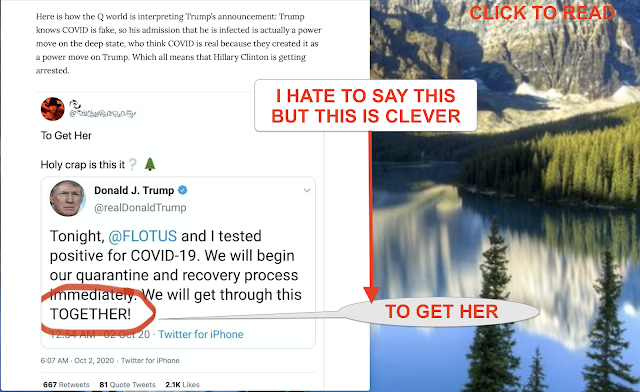 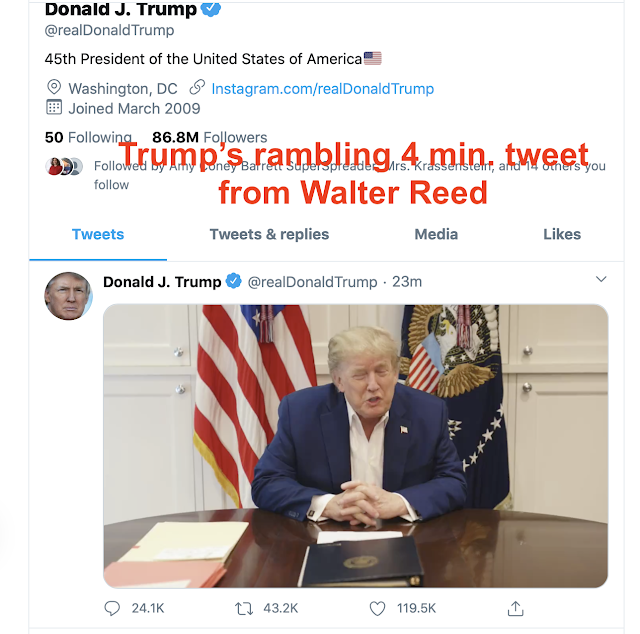 Above: Trump's rambling four minute tweet from Walker Reed. Just from this it appears he is on the road to recovery. What are the odds though that he gave Covid to someone else who isn't as lucky? If he is breathing a sign of relief it is for himself and perhaps Melania and his children, but depending on the celebrity or sympathy factor (a child for example) of anyone also who may get severely ill or die and who it can be shown contracted it from him it will probably prove to have a deleterious effect on public perception. 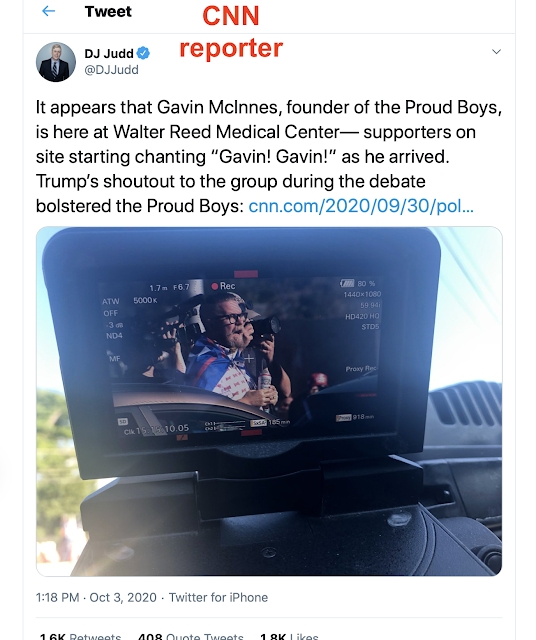 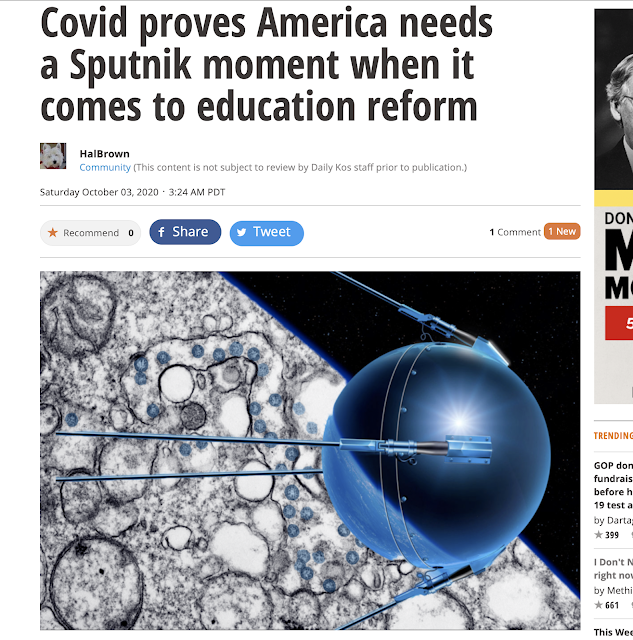 Trump's doing very well, says the presidential physician Dr. Conley. Of course we believe him, because, well, he has a giant presidential seal on his white coat.

I made the above image before I read this article on Buzzfeed: 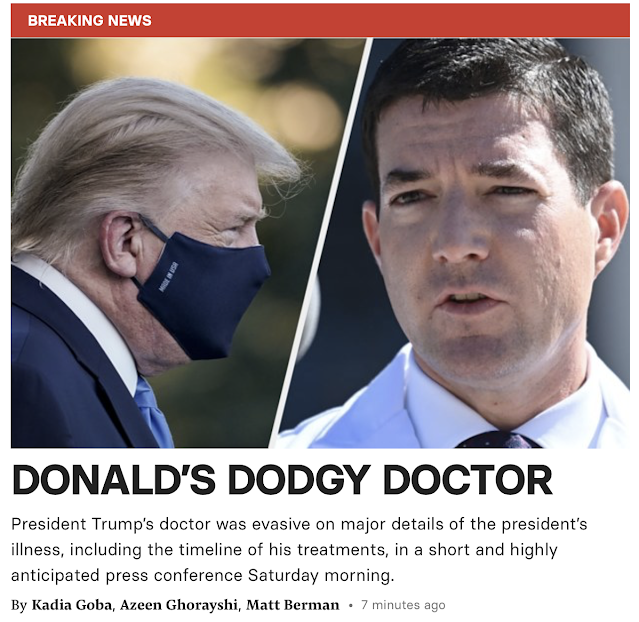 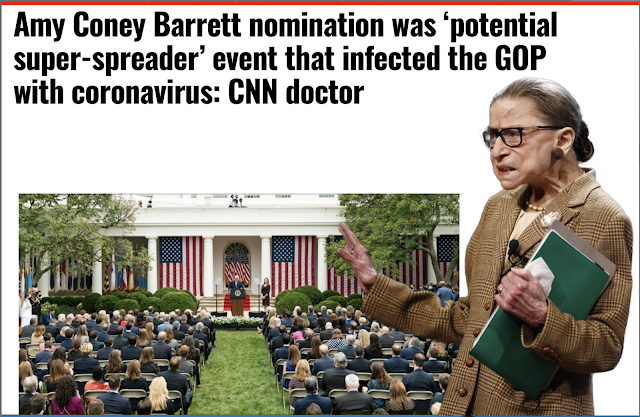 Link above, Photo augmented by HB

Check out this blog:

The first thing to say is simple: Best wishes to President Trump and the first lady for a speedy recovery from Covid-19.

After the announcement that they had tested positive for the coronavirus, I tweeted that I hope we can all remain civil, avoid snark, seek lessons and wish the Trumps a swift recovery. The result was an outpouring of gloating and snark — one person responded that “my thoughts and prayers go out to the virus.”

Let’s think about that. One of my objections to Trump has been the way he has eroded norms that underpin this country — like accepting election outcomes, respecting science and acting in a respectful way to opponents. If we decry such behavior and hope that the election can begin a period of national healing and recovery, then don’t we uphold norms best by modeling them?

A second point is also straightforward: Let’s learn from the president’s infection. Let’s make this a wake-up call that leads to mask-wearing and social distancing, saving lives.

This is a subscription story. I thought the revelations about the Secret Service agents was noteworthy. Excerpt:

Now, dozens of people — donors, aides, Secret Service agents — who had been close to Trump before his diagnosis wondered if they, too, might be infected. A whole world, with Trump at its center, suddenly faced the threat that the president had encouraged them to deny or understate.

Secret Service agents expressed their anger and frustration to colleagues and friends Friday, saying that the president’s actions have repeatedly put them at risk. “He’s never cared about us,” one agent told a confidant, who spoke on the condition of anonymity to describe the internal reaction.

Former Secret Service agents said it was unheard of for agents to openly complain about their president but that some currently in the ranks had become convinced during the pandemic that Trump was willing to put his protectors in harm’s way.

Agents who work in field offices around the country complained that since late August, they are no longer being tested when they return home from working at a rally for the president.

“This administration doesn’t care about the Secret Service,” one current agent relayed in an internal discussion group. “It’s so obvious.”

What happens if a presidential candidate dies or is incapacitated before an election? 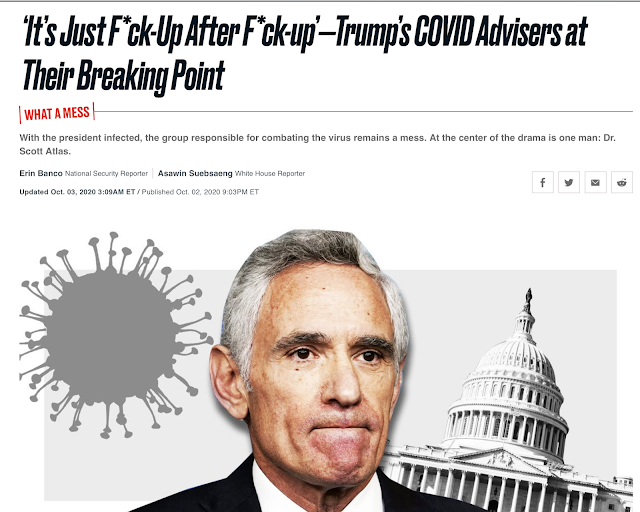 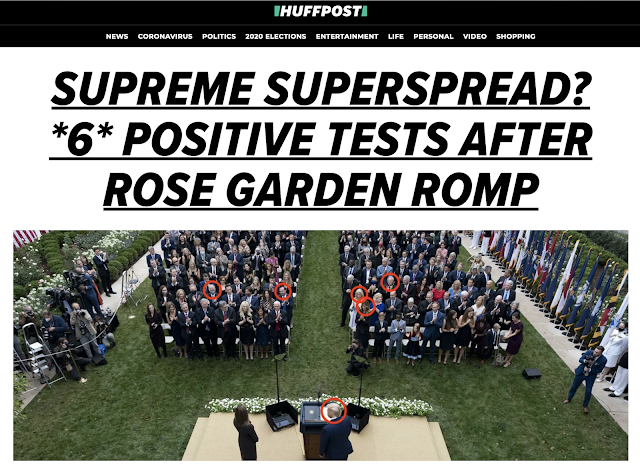 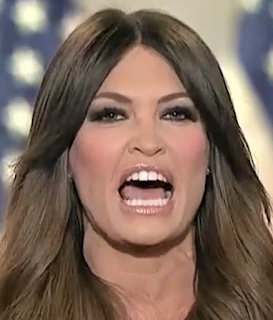 Kim Guilfoyle, the Trump campaign finance chair and romantic partner of the president’s eldest son, was allegedly terminated from her previous job at Fox News in 2018 after her former assistant accused her of sexual harassment. Moreover, Guilfoyle and her network employer allegedly took significant steps to silence the accuser. 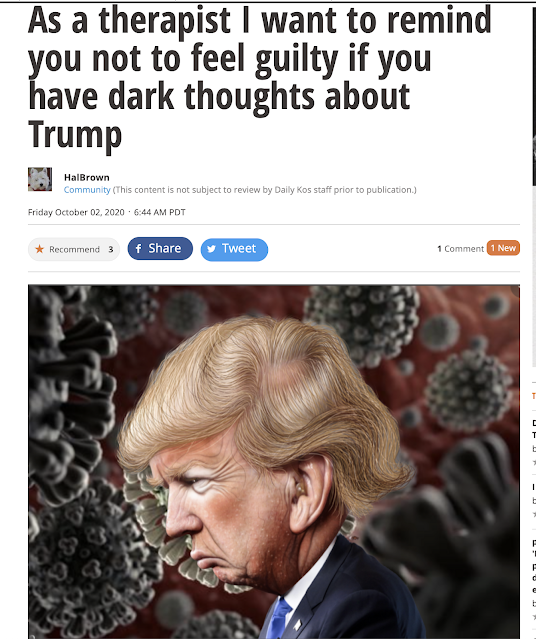 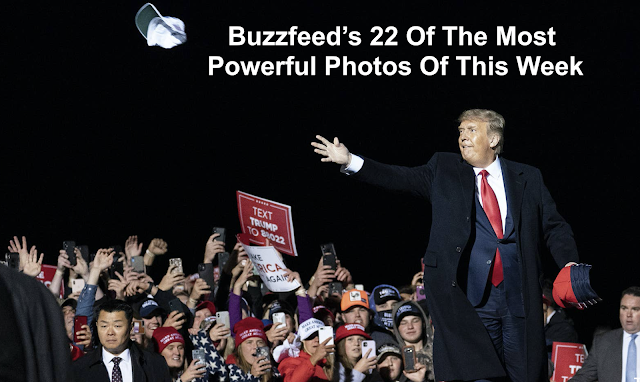 Above, considering the news that Trump has Covid some of these photos are particularly relevant.
Tomorow's story will be about the need for a Sputnik moment in American education and will feature this chart (click to enlarge both): 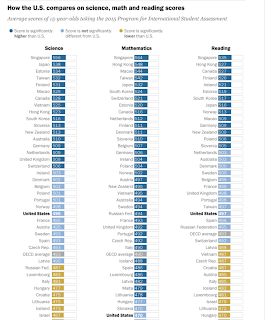 Bottom half of chart: 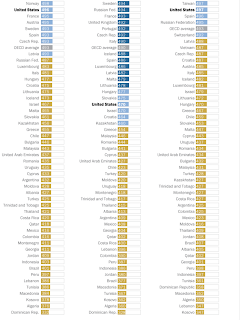 Not a link. Will be on at 5 AM Saturday 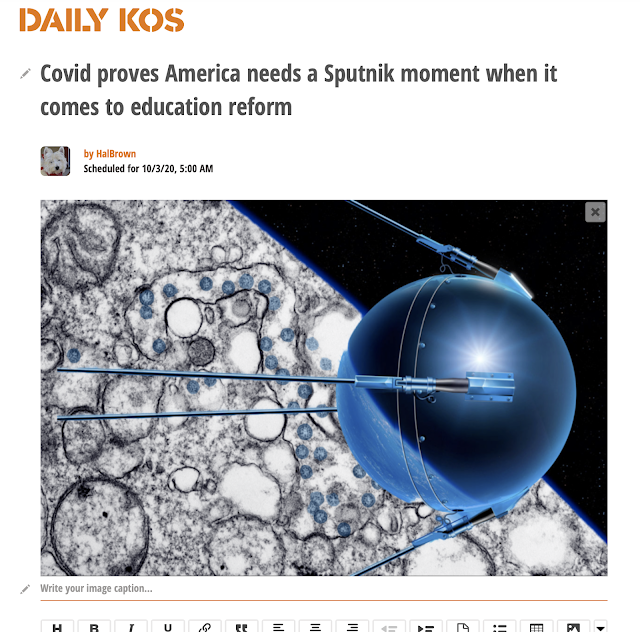 Vote for Biden and get Trump out of your head - Eugene Robinson, WaPo
Excerpt:

If you are like me and you watched Tuesday’s debate with a voice in your head screaming make it stop, take heart: We have the power to do just that. We can evict President Trump from the territory he has forcibly seized in our minds. We can — we must — vote him out of our thoughts.

We can remove this awful man from our collective headspace, which he has so thoroughly befouled. We can reclaim our serenity, our equilibrium, our sense 0f common humanity. We can return to a time when it was possible to go hours or even entire days without once thinking about what our president might be saying or doing. We can exhale.

At a recent rally in North Carolina, Trump was making one of his rambling attempts to mock Joe Biden when he told the crowd: “If I lose to him, I don’t know what I’m going to do. I will never speak to you again. You’ll never see me again.” Biden’s social media team quickly posted a clip of Trump’s remarks, then added a zinger: “I’m Joe Biden, and I approve this message.”

Conclusion: Through repetition and force of will, Trump creates his own “reality.” But we know it is not really real, so we must constantly spend time and effort dispelling the miasma of mendacity that pours out of Trump’s fog machine of a mouth. Doing so is exhausting, Sisyphean, psychic labor that drains the soul. Yet it is necessary — because the words of a president, by definition, are consequential — and so the only way to end this epistemological trench warfare is to end Trump’s presidency and send him home to Mar-a-Lago, where he can mutter at the walls.

If Biden wins the election, Trump will not go happily and might not go easily. But he will indeed go — and when he leaves the White House, he will also vacate our national consciousness, giving us all some psychic room to breathe.

A vote for Biden is more than a vote for sane governance. It is a vote for American sanity, period.

What should we think about pundits who tell us what this really means for the election? Could this have any impact on who people actually decide to vote for? Who knows! Voters’ minds have seemed very made up for months now, but this isn’t exactly a normal event. Trump, one could argue, could be the beneficiary of a wave of sympathy if he publicly handles this right. Or, one could counter, Trump has just again proven how reckless he’s been throughout the pandemic, how his bungled response to a deadly virus was always going to end like this.

Trump’s case against Biden has often boiled down to a machismo-infused “toughness”: That he’s the one who’s mentally and physically fit enough to take on America’s adversaries, foreign and domestic. How does that argument work now with Trump potentially fighting a very deadly virus in the weeks before the election? Or if he winds up being asymptomatic, does this just become proof of concept to his base?

It is going to be days until many of these questions begin to have true answers. Literally, the incubation time for the virus is days. We are not going to know much of anything for days. It is OK to be uncertain. This whole year has been uncertain. We’re all very practiced.

Anyway, back to screaming. 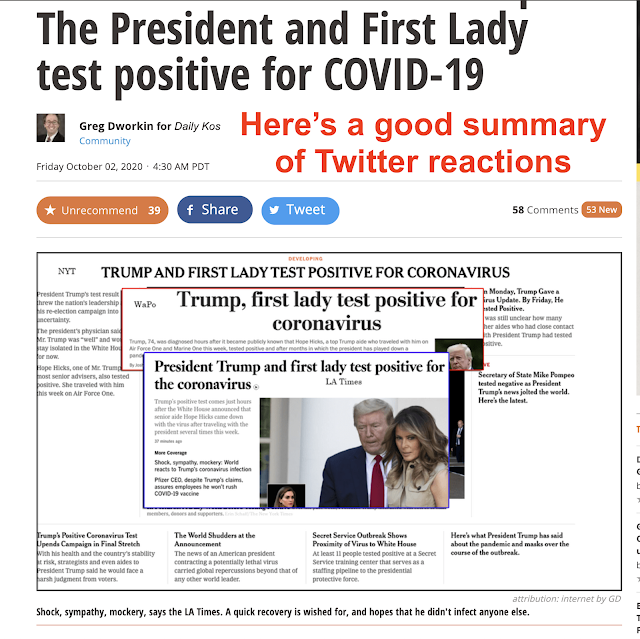 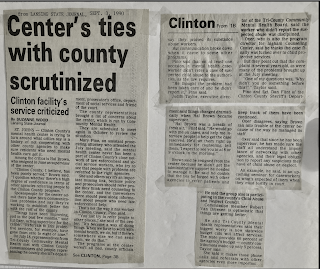