Click here for just Thurs. edition  This is a blog with my  opinions on news stories that pique my interest. My Bio here. 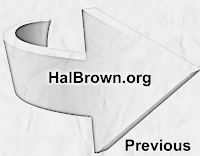 
You can comment on this story on Daily Kos here. 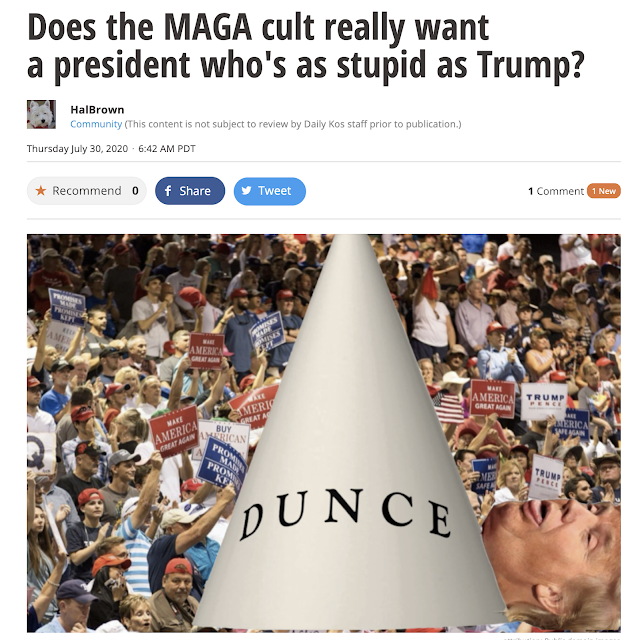 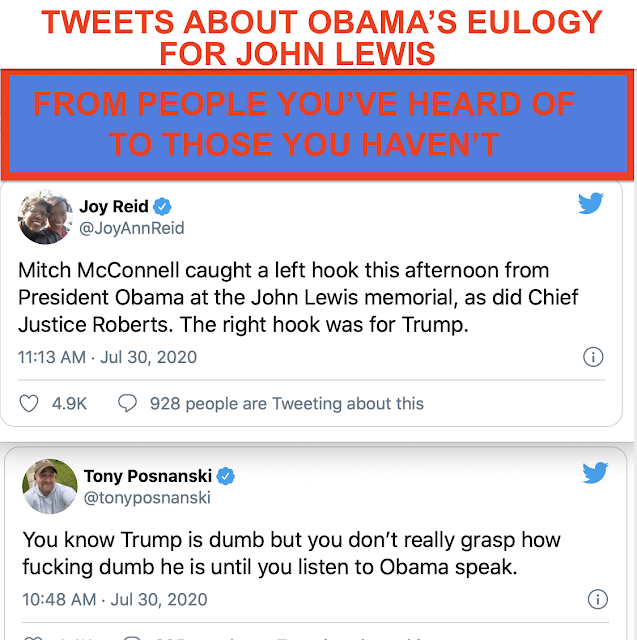 Would-be dictator Donald Trump would be unstoppable in a second term. That must not happen - by three mental health professionals -Salon

Publishers comment: This article doesn't offer anything particularly new. For that we have Mary Trump, the one mental health professional who has, at least informally, examined him in real life. I have nothing against articles like these and I have written dozens which I posted on Daily Kos.

These psychology (or Trumpology) articles have been published mostly on liberal websites. One of the only article published in the mass circulation media was "Donald Trump's malignant narcissism is toxic" by John Gartner, PhD, the founder of the Duty to Warn group.  At first these articles did a service by informing the general public about Trump's psychopathology. Of course they were not read by Trump supporters. Now the term "malignant narcissism" has become well known by those who have been reading about why he is psychologically dangerous. Bandy Lee, MD, the editor of The Dangerous Case of Donald Trump, distributed copies of the book to all Democrats in Congress and briefed a dozen members of Congress, including one unnamed Republican, on Trump's mental state.   Hal Brown

As one of Trump's most prominent black supporters I wonder how coming just after Trump's shrugging off the death of John Lewis how he will pay tribute to someone whose contribution to the back community was being a pizza entrepreneur.

Statue of Robert E. Lee in Richmond, VA, seen at night.
This is an amazing exchange between Democratic senator Tim Kaine and Mike Pompeo. 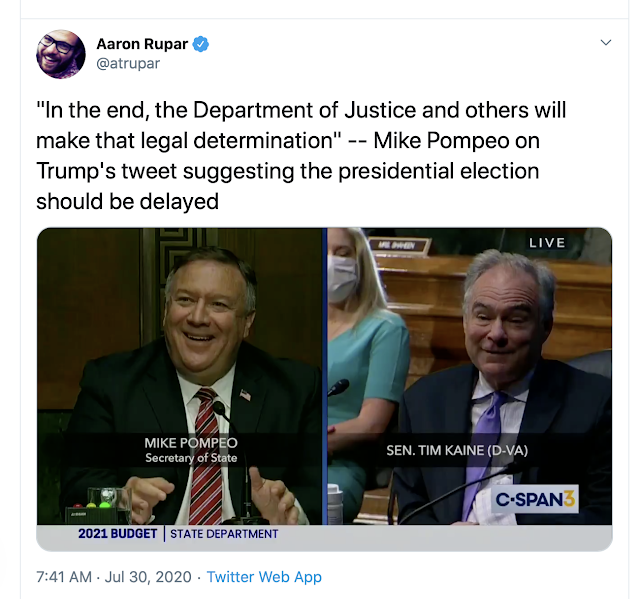 Read more about Trump wanting to delay the election and how other Republicans are reacting. 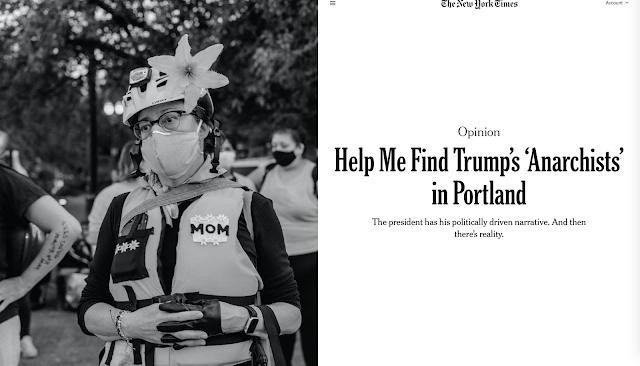 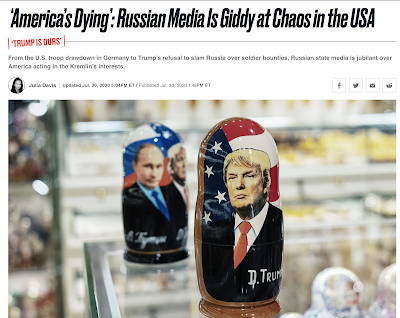 You need a subscription to read this. Below are a few excerpts:


I’ve been on the front lines of the protests here, searching for the “radical-left anarchists” who President Trump says are on Portland streets each evening.
I thought I’d found one: a man who for weeks leapt into the fray and has been shot four times with impact munitions yet keeps coming back. I figured he must be a crazed anarchist.

But no, he turned out to be Dr. Bryan Wolf, a radiologist who wears his white doctor’s jacket and carries a sign with a red cross and the words “humanitarian aid.” He pleads with federal forces not to shoot or gas protesters.

“Put your gun barrels down!” he cries out. “Why are you loading your grenade launchers? We’re just standing ——”

And then they shoot.

I’m against all violent attacks on officers, and I worry that Trump’s provocations are succeeding in seeding violence — as we’ve already seen in Seattle, Oakland and elsewhere. Every time angry progressives burn a building down, they win votes for Trump.

That’s what this is about: politics. The big threat in Portland and across America is not anarchists but Covid-19, so Trump welcomes street clashes to change the subject. If he actually cared about the defacement of the federal courthouse in Portland, he would remove the graffiti; instead, he leaves it there for photo ops. It’s the protesters, not the federal authorities, who deploy teams each night in Portland to clean up the area around the courthouse.

It also must be said that while there’s violence from both sides, what I’ve seen firsthand is that the most violent behavior overwhelmingly comes from the federal agents, and indeed the most serious injuries have been suffered by protesters. Your federal tax dollars paid to shoot a man in the face with a “less lethal” munition — an unprovoked assault that left him with a fractured skull and possible brain damage.

If you want to call one side “rioters” or “anarchists” working to create tumult in Portland, it’s the uninvited feds who qualify.


Food for thought: With Trump sometimes a so-called "softball interview" will be more revealing than a tough interview with questions he will evade or deflect from. 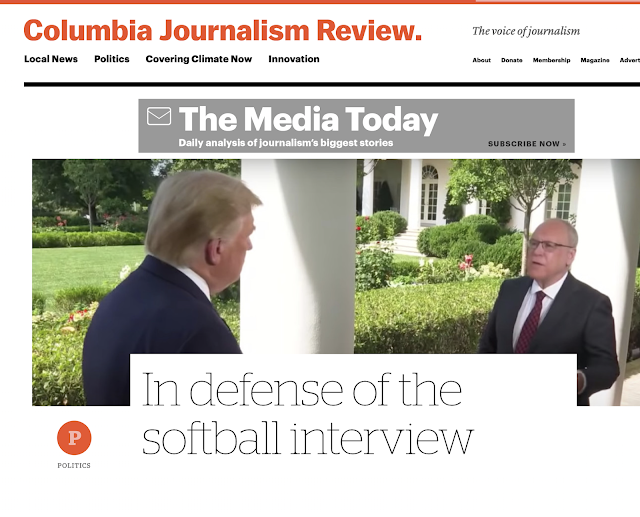 WHEN IT CAME TO ASKING THE PRESIDENT about his mental soundness last week, which Fox News reporter extracted the more revealing answer?
First up was Chris Wallace, the tough Fox News Sunday anchor, who said this about the Montreal Cognitive Assessment test that Trump so proudly passed: “I took the test too when I heard that you passed it,” said Wallace. “It’s not—well, it’s not the hardest test. They have a picture, and it says, ‘What’s that?’ And it’s an elephant.”
A few days later, Dr. Marc Siegel, Fox News’s medical commentator, asked Trump about the same topic, but framed his inquiry this way: “Presidential health, or health of the candidate, is going to be on the table.… I’ve seen a lot about your health, being in good health. What do you think should come out…regarding Vice President Biden?”
Wallace’s question may have been more emotionally satisfying, but it was Siegel—a commentator prone to adulation of Trump—who got the more telling answer: a six-minute meander through Trump’s thicket of self-diagnosis, during which the president mentioned China, Russia, Ukraine, judicial appointments, the Twenty-fifth Amendment, and, most notably, his ability to recite a string of five words while under observation by medical experts. The camera, trained mostly on Trump, occasionally cut to Siegel, who smiled sweetly and nodded understandingly, barely uttering a word as the president repeated “Person, woman, man, camera, TV” four times. 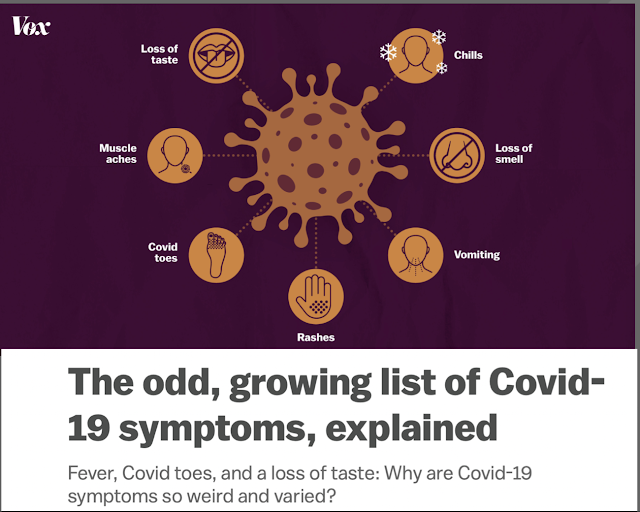 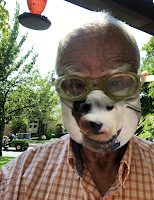 Left: Yours truly with my Westie mask and swim goggles.

This is an important Covid-19 article which I think is available without a subscription. 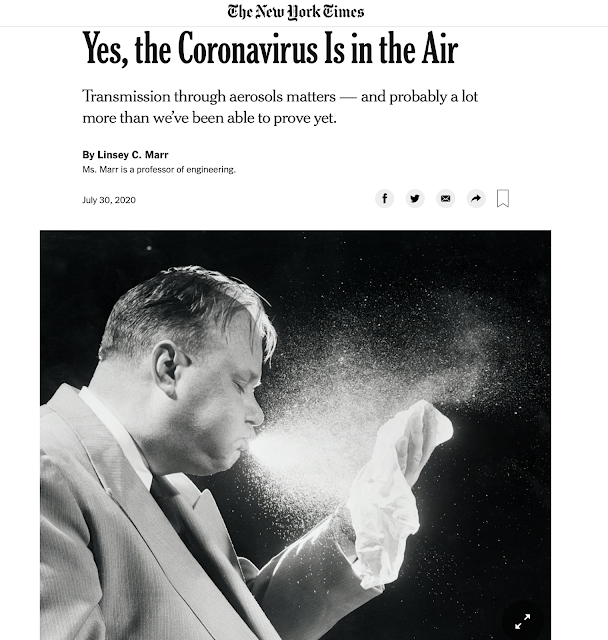 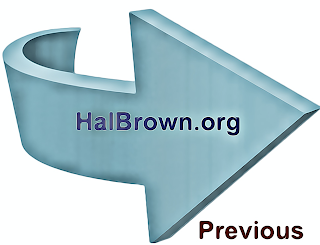