Click here for just Weds. edition  This is a blog with my  opinions on news stories that pique my interest. My Bio here. 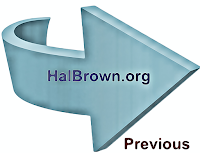 July 29, 2020:
Portland TV websites: KOIN and KGW for a local perspective on the protests and Gov. Brown's victory today. 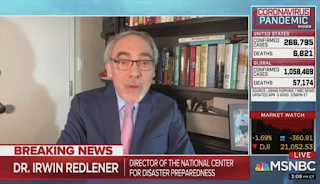 Quote of the day: Dr. Irwin Redlener, the director of the National Center for Disaster Preparedness, explaining that Trump’s “self-pitying” is “pathetic” and “incomprehensible.”

It’s “a side of him we really haven’t quite seen before, but what we’re dealing with. If you combine that with his statements on the hydroxychloroquine, we either have a case of really incurable madness or some sort of intentional manipulation of public opinion around some absolutely dishonest statements about the effect of hydroxychloroquine added to the pantheon of untrue statements that the president has made for, you know, since the beginning of all of this. I can only imagine, and maybe this is some sort of twisted logic in trying to create some image that will help him in November for his re-election. I just don’t see how that all works. And he’s looking increasingly unstable. And the promotion of this pitiful recurrent, you know, imagination is just one of many. I don’t know how they’ll create a narrative around COVID in November, but I suppose they’ll keep trying.” 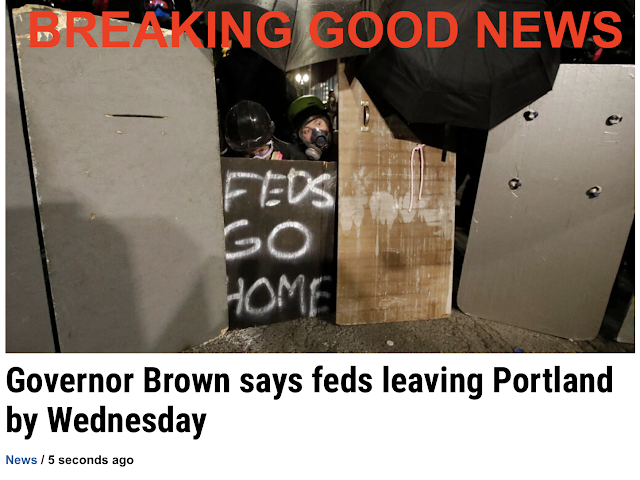 
The Louie Gohmert story gets "better" and better..... and even better as House Minority Leader Kevin McCarthy, yes, a Republican, called him Congressman Covid but mistake (watch video) 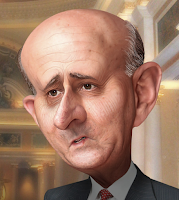 This morning: You can comment on this story on Daily Kos. 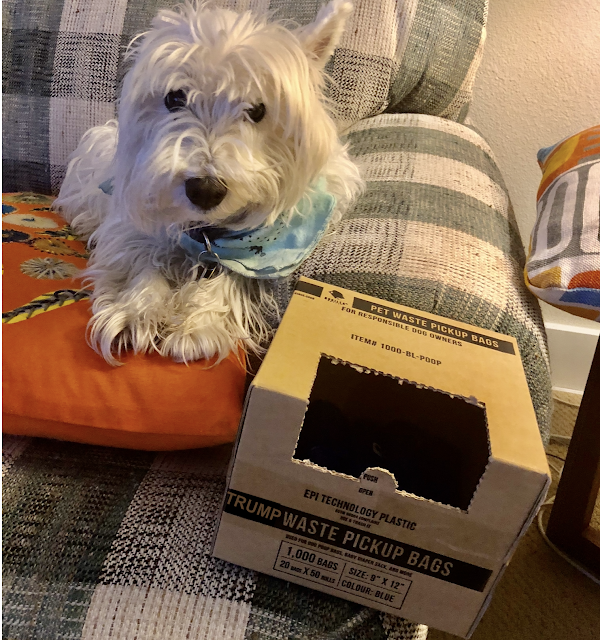 As someone who writes on Daily Kos and on my blog about Trump I feel like the circus worker in the joke whose job it is to clean up the elephant excrement. It has two basic versions.
Someone asks him why he works at such a stinky job and he either says “it’s a dirty job, but someone has to do it” or the most popular answer “what, and give up show business.”
Following Trump with the job of sorting through the excrement he discharges on a daily basis to chose an interesting mound of his shit to write about, or put another way to shovel into the blogging mill, is a challenge.
If I am in the mood to post something on Daily Kos I am challenged to write something halfway original which lots of others aren’t writing about. There are so many possibilities but some many far better writers than me are writing about them.
Actually elephant poop is being used to make paper. 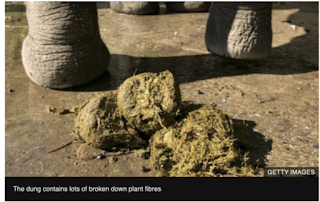 Elephant poop contains lots of broken down plant fiber. The excrement that Trump creates is a heaping pile of lies, magical thinking, and self-serving delusions.
Just look at the stories from yesterday which I posted on my blog. They range from the story about Trump’s new favorite COVID doctor who believes in alien DNA, demon sperm, and of course Trump’s snake oil drug, Hydroxychloroquine, to how Trump's malignant narcissism and sociopathic personality makes it impossible for him to respond appropriately to a crisis on the scale of COVID-19.

I am in @AirForceOne_HQ flying to the Great State of Texas. It is AMAZING in watching @FoxNews how different they are from four years ago. Not even watchable. They totally forgot who got them where they are! 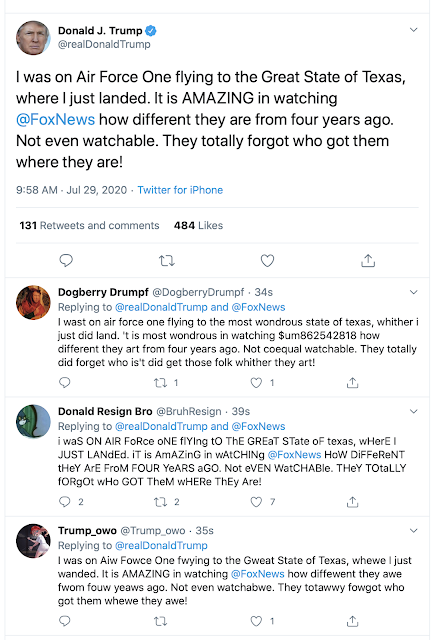 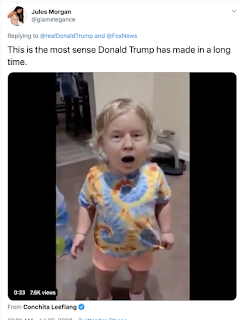 Trump made him famous and now a previously obscure FBI agent is got to have a best seller thanks to him.
James Comey and former Deputy Director Andrew McCabe have each released books that describe aspects of the Trump investigation. Andrew Weissmann, a former Justice Department prosecutor who served on Mueller's team, is due out with a book in September. My hunch is that the book by Lisa Page's former lover will outsell those books. 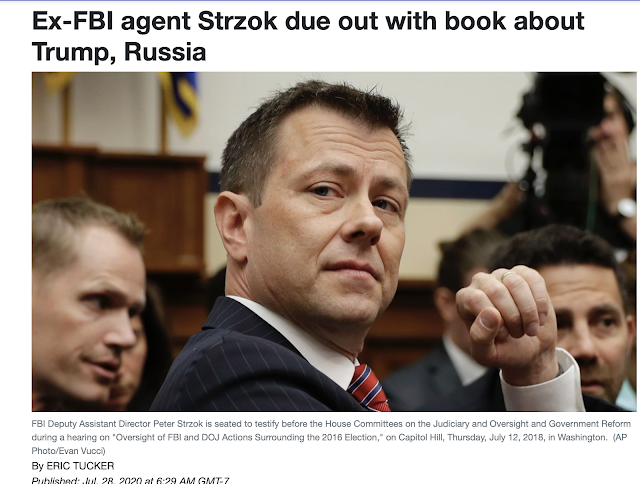 Erik Erikson was a German-American developmental psychologist and psychoanalyst known for his theory on psychological development of human beings. He may be most famous for coining the phrase identity crisis. When he came to the United States at the start of WWII he consulted with the OSS to help them understand Hitler's popularity with the German people. In this article psychoanalyst Martin-Joy concludes with these ominous words (my emphasis added):

When Erikson introduced “The Legend of Hitler’s Childhood” to a general readership after the war in Childhood and Society, he put eloquently the reasons for the recurring concern that so many psychiatrists, psychologists, and psychoanalysts continued to have about dangerous public figures in the following decades.  The West, Erikson said, “hopes that after some feeding and policing by occupation troops, these same Germans will once more emerge as good customers, easily domesticated…and forever forget the martial foolishness they were once more trapped into.”  But forgetting too quickly is a hazard.
Instead, he said, “it is our task to recognize that the black miracle of Nazism was only the German version—superbly planned and superbly bungled—of a universal contemporary potential.  The trend persists; Hitler’s ghost is counting on it.”
The DonkeyHotey which I added below is all the commentary I need to add to this story.

Trump's last-ditch display of fascist theatrics is straight out of Orwell. It's ghastly, but it might not be enough:

In total, Trump's terrordome is the theater of political terror and the "American carnage" he first promised in his 2016 inauguration speech. Trump hopes to use the same themes to win the 2020 election -- and then to stay in office for as long as he wants.

Trump's terrordome has a new attraction: his personal stormtroopers, a de facto Gestapo.

In a massive violation of the civil and human rights of the American people, Trump's secret police are operating in Portland, Oregon, grabbing protesters off the streets and disappearing them for interrogated. Trump's Gestapo is beating, gassing and shooting protesters with so-called non-lethal weapons, which in reality can cause grievous physical harm.

Trump has promised to unleash more than 50,000 of his personal enforcers in Democratic-led cities across the country. He will likely use these same enforcers to try to steal the 2020 election.

Trump's theater of terror in Portland (and soon elsewhere, perhaps) is following a script common to the authoritarian playbook where the leader creates a crisis, the people resist and then the threats and violence are amplified — with the end goal being a "state of emergency" that "justifies" the authoritarian seizing even more power.


Americans are suffering. Trump offers them a doctor who warns of sex with demons. Washington Post subscription 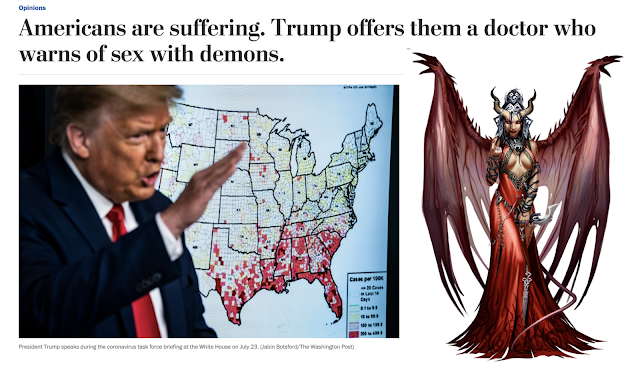 EXCERPT
Not so, says Stella Immanuel, a Houston pediatrician and spiritual leader of Fire Power Ministries, a pronouncedly non-orthodox church. Endometriosis and other potentially dangerous gynecological conditions are the residue of sexual intercourse with demons, Immanuel teaches. These demons, known as “spirit husbands” and “spirit wives” (you might prefer their pet names: Incubus and Succubus) once walked the Earth in physical form. After they drowned in Noah’s flood, however, they carried on only in non-corporeal form. They visit humans in sexy dreams, which aren’t dreams after all but spirit spouses making a booty call. The demons are responsible not only for diseases of the female reproductive system but also for male impotence, most financial troubles, marital discord and spiritual malaise.


This is not Immanuel’s only diversion from the medical mainstream. She also maintains that alien DNA is a component of some therapeutic drugs and that government scientists are developing a vaccine to prevent religious faith. You can find these and other teachings of hers on YouTube.
Or you can find Immanuel on President Trump’s Twitter feed, where she testifies to the power of hydroxychloroquine (yep! we’re back to that one) to cure covid-19 and assures the public that masks are not important to fighting the pandemic. More than 10 million Americans heard her advice, thanks in part to the president’s amplifying effect, before Facebook took down her page. In response, Immanuel threatened to have Jesus unplug Facebook’s servers.
.........
Publisher's Comment: Not only do we have a dabbler in delusions for a president who presents fringe viewpoints as factual because "some people" or "some doctors" agree with him or saying that something is fake news, but we have someone who has normalized insults to reporters who ask him tough questions. This is from his press conference today:

“I was very impressed with her and other doctors that stood with her. I think she made sense, but I know nothing about her, she made a statement with other respected doctors. She was making a statement about hydroxychloroquine with other doctors that swear by it. They think it’s great, but she was not alone. CNN said I said this and I said that. You ought to tell your network the reason the ratings are so bad is because the coverage is so bad, and that goes for MSNBC also. Your network is so dishonest about the coverage about everything and there’s the example.”

File this under if this wasn't bad enough, how about this?
It goes beyond Trump not believing the intelligent about Russia paying bounties to the Taliban for Americans they killed.
But that wasn’t the most surprising revelation Trump made, Swan said. “The second question is actually more important, which is, fine, you don’t believe this intelligence, or you’re skeptical of it,” Swan said. “Let’s try and take the most good-faith interpretation of it. But you know that Russia has been supplying weapons and money to the Taliban because the man who ran your forces in Afghanistan, John Nicholson, under your administration, said this on the record when he worked for you, and for him to say then, well, I didn’t — I don’t know if I’ve heard about this, never reached my desk, and by the way, we gave them weapons, too.”
“I mean, like in a different era,” he added. “I just — honestly, it was one of the most shocking — I’ve covered president Trump for five years. I think it’s one of the most shocking exchanges I’ve ever had with him.” 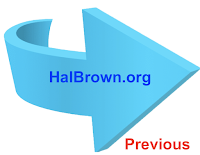