Website speeds up if you click here  This is a blog with my opinion on news stories that pique my interest. My Bio here. 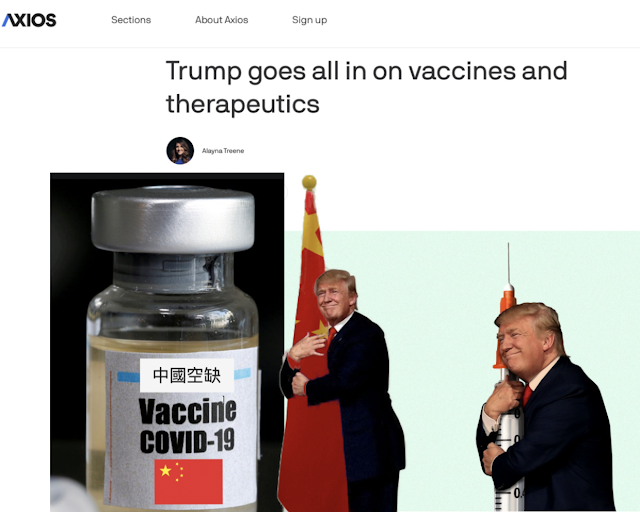 Covid News: What if you get it?

From Jennifer Rubin's Washington Post OpEd about how Trump's team still does not get it (Paywall).


She begins:
Judging from their TV appearances, President Trump’s advisers are unwilling to admit error and adjust their handling of the coronavirus pandemic accordingly. They still insist they are doing everything perfectly, and still blithely point to about a third of the United States as merely some “hot spots.”

On CNN’s “State of the Union,” Adm. Brett Giroir, who heads the widely panned federal testing operation, would not admit that much of anything was wrong, only conceding he wouldn’t be “satisfied” until the virus is eradicated. Giroir hedged when asked if everyone could get a test, saying everyone who “needs” one can get it. (This would not include all asymptomatic people.) Presented with a Harvard University analysis that says we should be doing between 3 million and 3.5 million tests a day, Giroir raised a straw man that 300 million tests was unrealistic. He insisted that, despite long wait times for test results, that the Defense Production Act did not need to be invoked to increase the supplies necessary to collect and process test specimens.

She concludes:
Cutting unemployment benefits while giving employers immunity is a peculiar way to win votes in an election year, but a good way to pander to donors and right-wing ideologues.
Whatever the Republicans present and whatever the final package will be, their attitude helps explain why they are losing coast to coast, be it in presidential and Senate races or the congressional generic poll for House races. Their denial of the degree to which they have botched the pandemic response and their blindness to the experience of ordinary Americans have not changed. Their suspicion that Americans are somehow goofing off, that parents are irrational for not wanting to send their kids to in-person school and that we should not be concerned about 60,000 or more new cases a day does not suggest they have learned much of anything after 143,000 deaths.
I figured that since I created this image I might as well use it in a tweet. Whether Giroir, the pediatrician and four star general, chooses to wear a military uniform or would rather dress in a suit is unknown. I suspect Trump has told him  to wear a uniform even though doing so is, to say the least, deceptive. He isn't a soldier. It really is ridiculous as there are so many of the things Trump does to make him appear to be a powerful leader.

Sometimes Trump prefers that his generals and admirals wear their prom outfits:

His Surgeon General who holds the rank of vice admiral in the U.S. Public Health Service, Jerome Adams, also wears a uniform.Here he is in his dress uniform: 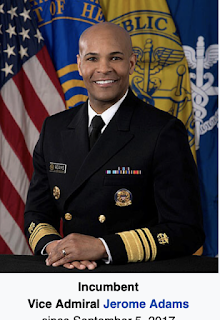 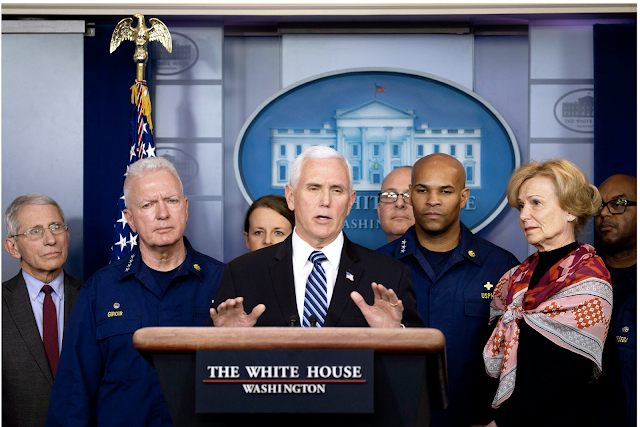 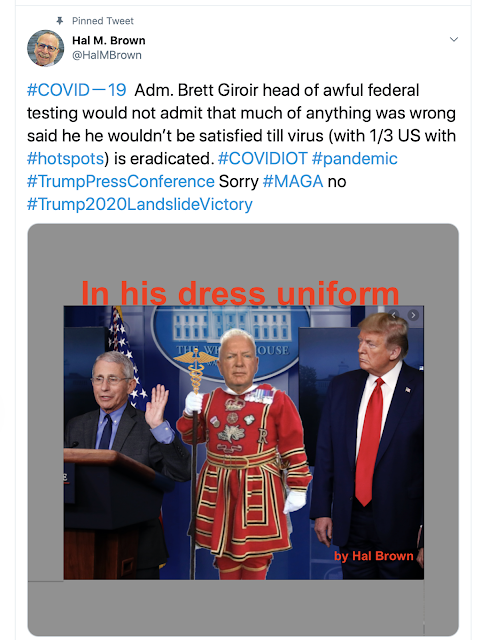 You need a subscription to read this. Here are a few excerpts.
The evidence that Mr. Trump’s electoral woes stem as much from the gender of his opponent as from his own failures begins with his net approval rating: the percent of Americans who view him favorably minus the percent who view him unfavorably. Right now, that figure stands at -15 points. That makes Mr. Trump less popular than he was this spring. But he’s still more popular than he was throughout the 2016 campaign. Yet he won.

What has changed radically over the past four years isn’t Americans’ perception of Mr. Trump. It’s their perception of his opponent. According to Real Clear Politics’s polling average, Joe Biden’s net approval rating is about -1 point. At this point in the 2016 campaign, Hillary Clinton’s net approval rating was -17 points. For much of the 2016 general election, Mr. Trump faced a Democratic nominee who was also deeply unpopular. Today, he enjoys no such luck. 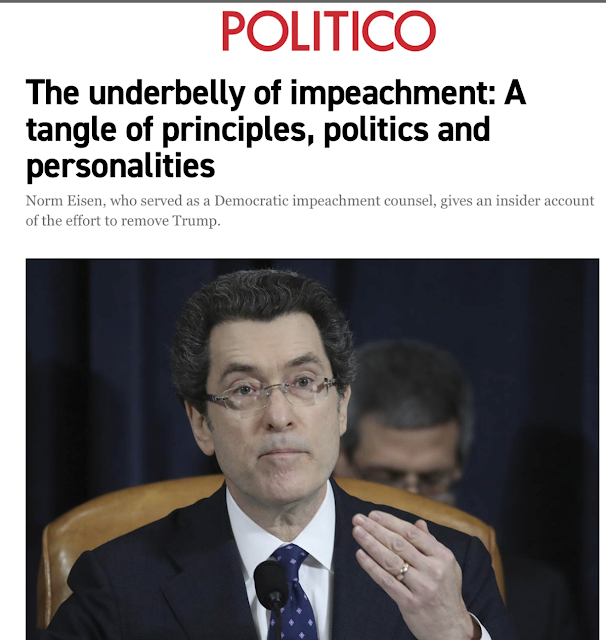 Eisen, who signed up as a House Judiciary Committee attorney in early 2019 with an eye toward impeachment, also describes the hail of early “f--- you’s” he delivered to House Intelligence Committee aide Daniel Goldman, who he said had accused him of treading on the panel's turf. (They would later get past the initial tension, Eisen says). He describes how internal Democratic politics led him to shave a planned 10 articles of impeachment — encompassing a sweeping range of allegations such as “collusion” and “hush money payments” down to three, and then two, after vulnerable Democrats rejected charging Trump with obstruction of justice.

Eisen reveals the sometimes painful conflicts between House Judiciary Chair Jerry Nadler (D-N.Y.) — in Eisen’s eyes, the unsung hero of impeachment — and House Intelligence Chair Adam Schiff (D-Calif.) and Speaker Nancy Pelosi, who often resisted Nadler’s lead-foot on the impeachment accelerator. Nadler drew Pelosi’s ire throughout the process by leaning into calls for impeachment faster than the rest of the House was ready for, and Eisen said Nadler had accepted that it would take time to restore his “former level personal warmth” with the speaker.

Drugmakers refuse to attend White House meeting after Trump issues executive orders on costs - A White House meeting with top pharmaceutical executives that President Donald Trump promised for Tuesday is off, five industry sources familiar with discussions told POLITICO. Three said the drug-pricing discussion was canceled because the major drug lobbies, reeling from Friday’s cluster of executive orders on the topic, refused to send any members.