About me: background, credentials etc. 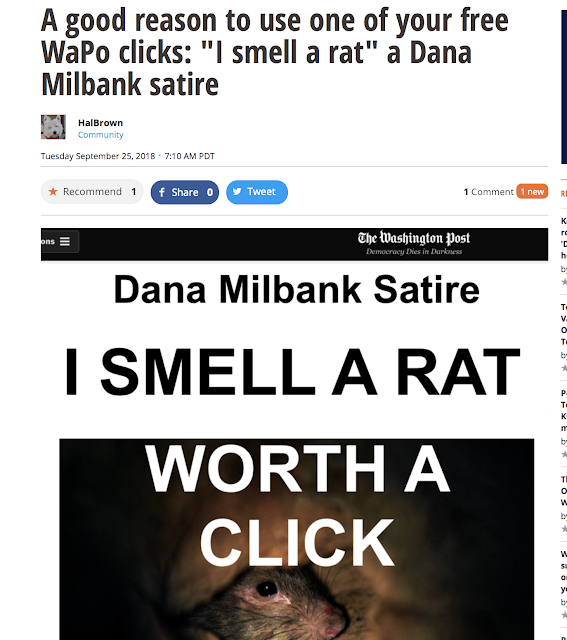 Kavanaugh Was ‘Aggressive And Belligerent’ When Drunk, His Yale Roommate Says 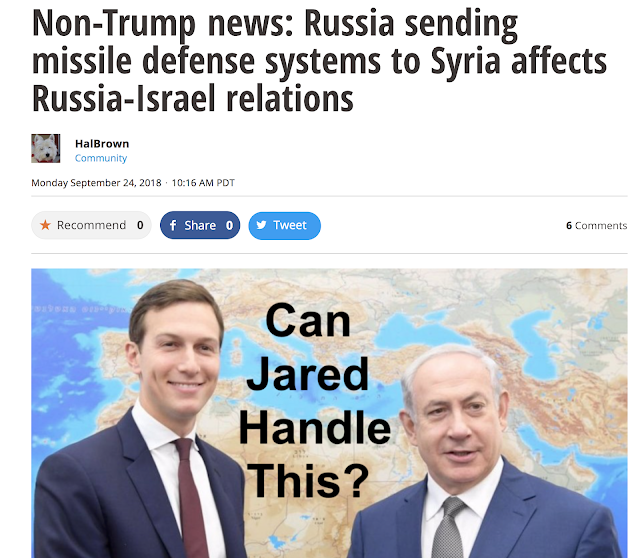 Update: Nothing until Thursday when Trump comes back from the UN meeting in NYC.

From what I am hearing on MSNBC, and what makes sense, is that he will not resign and will force Trump to have Kelly fire him. If that happens this WaPo headline will have been proved to be wrong.

Commentators on MSNBC are also saying that this could be an "air clearing" meeting and that nothing will change for now.


What I haven't heard is the chance that Kelly set this up on his own and something far more drastic is in the works if it turns out that, as one person has speculated, Kelly was the author of the anonymous letter to the NY Times.

The Kavanaugh confirmation is a festival of misdirection and ugliness - E.J. DionneGOP pushes for swift hearing as Kavanaugh accuser discusses terms for testimo

Although many of the Supreme Court’s decisions have been contested and even condemned, its justices have been remarkably successful in performing the role Alexander Hamilton assigned them in Federalist No. 78: to be “an essential safeguard against the effects of occasional ill humors in the society.” What Hamilton didn’t count on was that the “occasional ill humors in the society” would infect how members of the court are chosen.

The Republican Party Has Laid Itself Bare by Christine Embe
Ah. We had wondered what the hurry was, and now it all makes sense. It turns out that Graham and other in-the-know Republicans were likely in a rush because they were hoping to get out ahead of a second female accuser, to ram through a confirmation vote before any new potential roadblocks could be brought to light. It was “imperative.”
Here's Why You Call the FBI by Jennifer Rubin
Republicans’ argument against investigation is so flimsy and absurd that one is tempted to believe Republicans think voters are dolts and/or that there’s no harm in putting Kavanaugh on the court even if he did what he is accused of. Nevertheless, in the wake of the “mistaken identity” fiasco, the line for Republicans now seems to be that we shouldn’t call in the FBI to investigate distant events in a nominee’s past.


Why Is Michael Avenatti Involved Now?
The lawyer for Stormy Daniels and 2020 presidential hopeful inserted himself into the Kavanaugh story late Sunday after he tweeted that he’s representing a woman who has “credible evidence” against the nominee. Avenatti said he and his client will “be demanding the opportunity to present testimony to the committee” and added that he’s aware of “significant evidence” that Kavanaugh targeted women with alcohol in order to allow “a train” of men to take advantage of them sexually. So far, his client is unnamed. Daily Beast

But Whelan was in communication with at least one Republican member of the committee this week, and that member told associates he was aware Whelan’s theory involved the home of a Kavanaugh classmate near the Chevy Chase Country Club.

Matt Whitlock, deputy chief of staff to Sen. Orrin Hatch (R.-Utah), directed people to Whelan’s Twitter feed on Wednesday in a tweet of his own and later deleted his tweet.
“Keep an eye on Ed’s tweets the next few days,” Whitlock wrote

After Whelan unveiled his theory Thursday evening, Whitlock deleted the tweet, explaining that he “didn’t want to promote” anything that “dragged an unrelated private citizen into this unfortunate situation.”

“I had no idea," Whitlock added, "what Ed was planning.”

About where Orin Hatch is coming from:
from


Republican elites are also defending Kavanaugh, with Sen. Orrin Hatch, R-Utah, going so far as to say that even if the rape allegations were true they might be excusable: "I think it would be hard for senators not to consider who he is today". Once again, per America's tradition, culture and habit, elite white men are protected from the consequences of their behavior. Toxic white masculinity is encouraged in America. White men are infantilized, while black and brown men and boys are pathologized. Salon 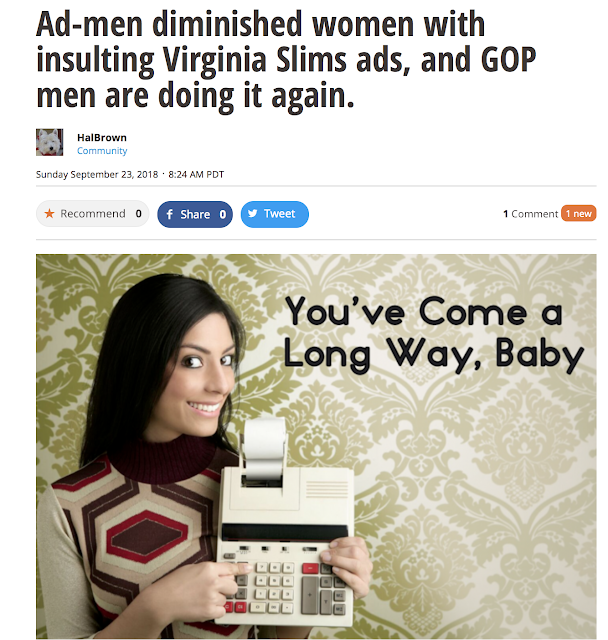 No surprise who Trump liked to pal around with: 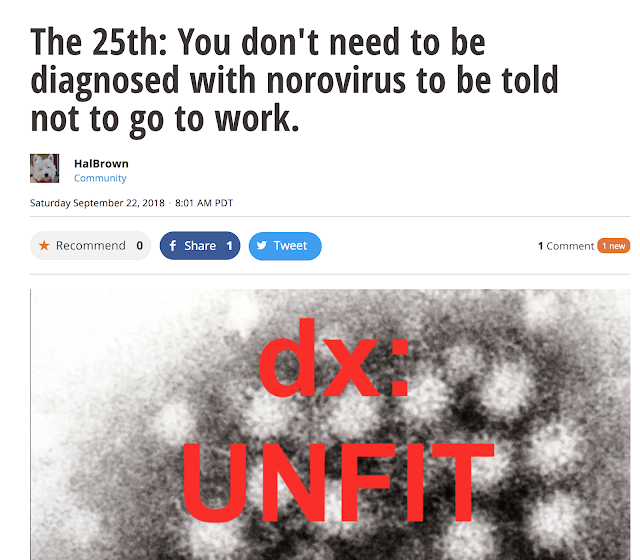 Not to miss: Trump just walked back his controversial order to declassify Russia investigation information

Rendered speechless with this news:

President Trump Suggested Spain Build Its Own (3,000 mile) Border Wall Across the Sahara

Is this insane or what department? Big bucks for new but worn out looking sneakers! 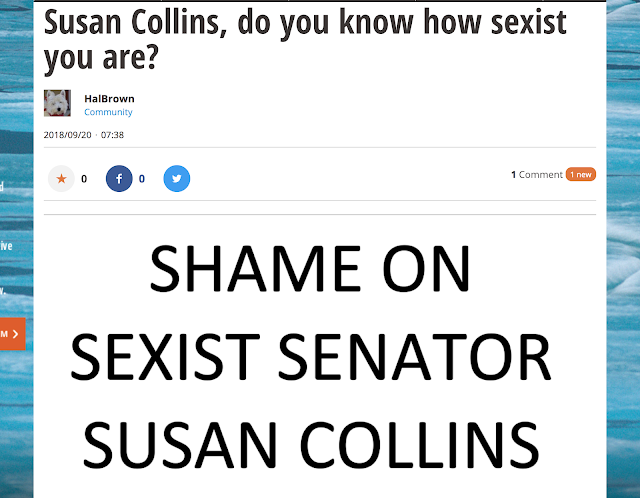 It's a good thing Trump doesn't read. I doubt anyone will let him look at this Salon article. Why? Hmm... take a look yourself.

When I readthis Washinton Post storyI thought “what if what is happening in the United States was happening in Russian?” What if Putin was in charge of theRussian spy agency equivalent of the CIA or FBIand he had a president of Russia who was a doppelganger of Donald Trump”

The chapter from “The Apprentice” by Greg Miller (about the author) published in the Washington Post describes how on his second day in office Trump went to the CIA and stood in front of the hallowed wall of stars for fallen agents and gave unscripted remarks. Consider what Putin as a head of the Russian equivalent of the CIA would have thought about this in a new president came to his headquarters and this happened:

Absorbed in self-adulation and grievance, Trump was blind to a stunning array of problems, some in plain view from the CIA stage: the failings of a national security adviser he’d insisted on hiring despite warnings; the existence of a larger agency workforce beyond this clapping, self-selected crowd that would be profoundly disturbed by his vainglorious performance; the fragments of intelligence being assembled several floors directly above him in Russia House that would help expose a web of connections between his campaign and Moscow, and feed into investigations that would threaten his presidency.
Trump’s ability to see these perils was impaired by his own unfamiliarity with the norms of governance, his insecurity and self-regard. Other presidents had varying levels of these traits, but none had ever possessed such a concentrated combination. These qualities had been on display from the start of his campaign. But now, against a backdrop that symbolized the profound burden of presidential responsibility, his shortcomings seemed suddenly and gravely consequential.

Of course, if Putin was really in charge of one of the primary Russian intelligence agencies he would have been compiling intelligence about all the possible politicians within his own government who could end up as the president. It may not be our way, but I am sure it was the Russian way before Putin became president.
Let’s say Putin decided to give the new president the benefit of the doubt and wait to see how he governed.
Then over time the new president attacked the intelligence community run by Putin repeatedly and relied on the Russian equivalents of Sean Hannity, Lou Dobbs, and Jeanine Pirro (not that there are any Russian counterparts to these people) who told him that the Russian spy agencies were part of a deep state out to undermine his authority.
What if the Russian president demanded that top-secret documents which could compromise investigations and put agent’s lives in danger?
What if, in an interview with the media he said“I hope to be able revealthe corruption of the Russian intelligence community and make this one of my crowning achievements by exposing something that is truly a cancerin our country.” (see Interview with The Hill)
Finally, after an exhaustive investigation, what if Putin decided that he could prove that the president of Russia had conspired with the United States?
What would Putin have done?


President Trump should thank his lucky stars that he is the president of a constitutional democracy. 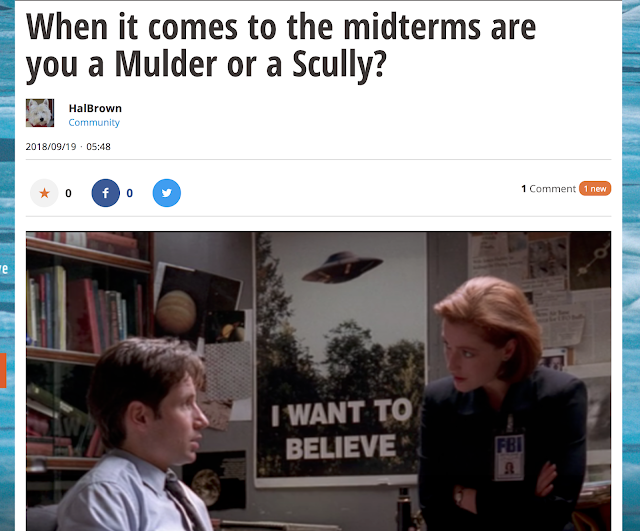 The master of distraction is trying to turn attention away from the #KreepyKav hearing with this: 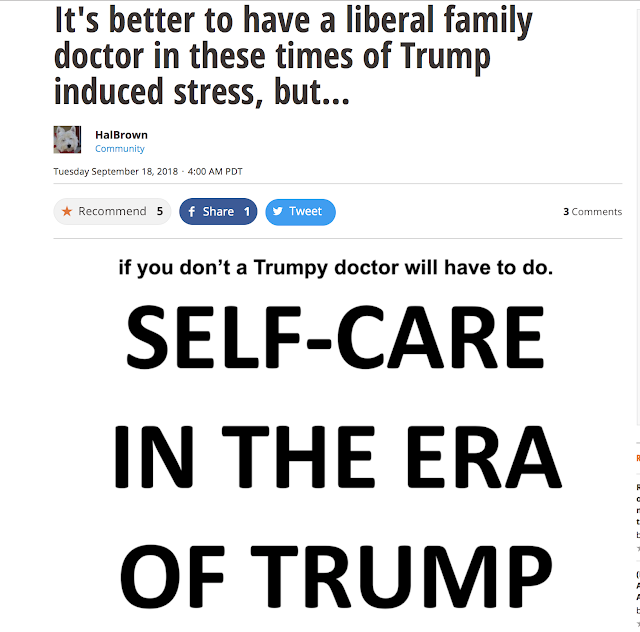 My Daily Kos story is about somene whose name everyone will soon know: Christine Blaisey Ford research alcoholism, addiction, post 9-11 trauma, and more 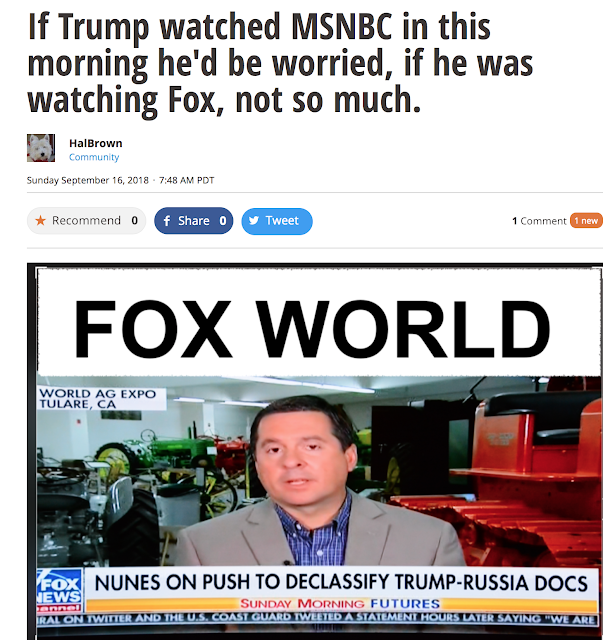 Here's an article wth a manure truck load of profanity:

One could plausibly argue that nobody has done more for the anti-Trump #resistance than Trump himself.
Sept. 15, 2018 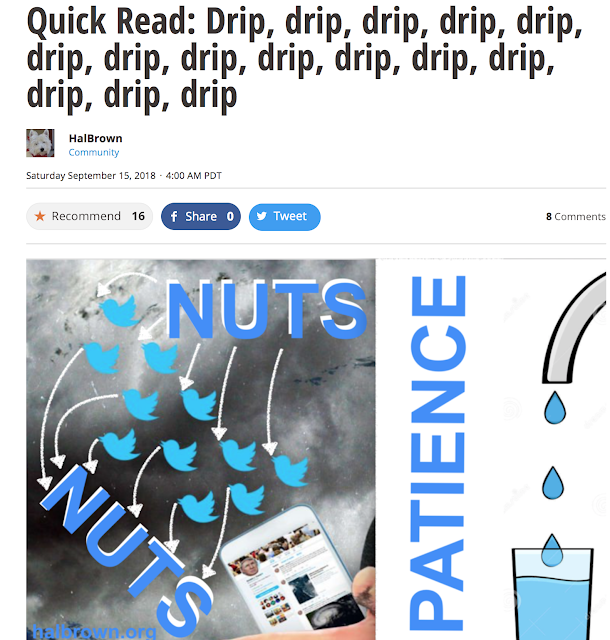 This could be major, read the entire article: How Putin Could Be Planning to Make a Fool Out of Trump — and Throw the United States into Chaos

One Russian insider whom I cannot name has emphasized that Trump is merely a tool to Putin’s determination to cause chaos in America.

As long as America stays locked within its domestic political turmoil, its role on the world stage is diminished and, reciprocally, Russia’s is enhanced. This analyst suggests that, if Democrats win the House of Representatives in November, Putin will release such damning information on Trump that the new Democratic House will be forced to draw up articles of impeachment.

With a Senate that may still lack a two-thirds majority to convict given the Republicans are expected to hold onto more than a third of the seats, such a release would tie up the United States in domestic knots for at least a year and a half, perhaps two — right up until 2020.

This political immolation would be Trump’s last service as a stooge of Putin’s.

Under the Radar:  The CEO of retail conglomerate L Brands, which owns Victoria’s Secret and Bath & Body Works, announced at a leadership summit in Columbus on Thursday that he “won’t support this nonsense in the Republican Party” anymore. Ohio billionaire and longtime Republican donor Les Wexner says he is officially done with the party, and was prompted to leave after former President Barack Obama visited the state.
Sept.14, 2018 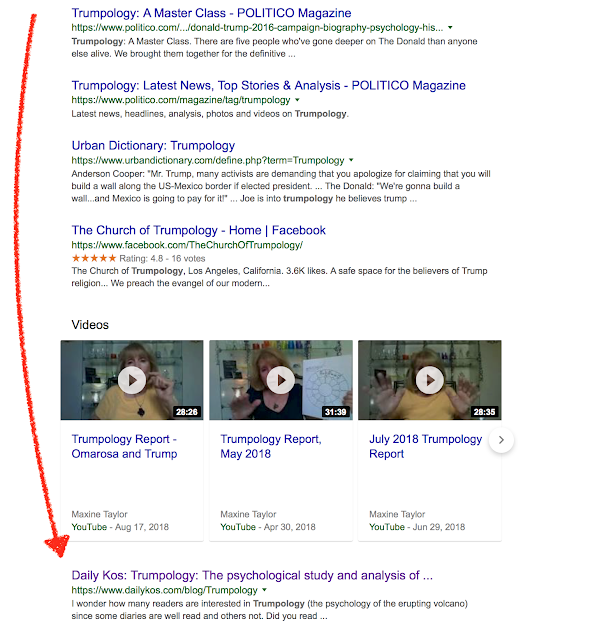 What with Trump and Florence in the news, here's a story to be aware of that may turn out to be very significant:

Letitia James wins the New York attorney general primary. She could be the first black woman ever elected to the job (and possibly take on Trump). 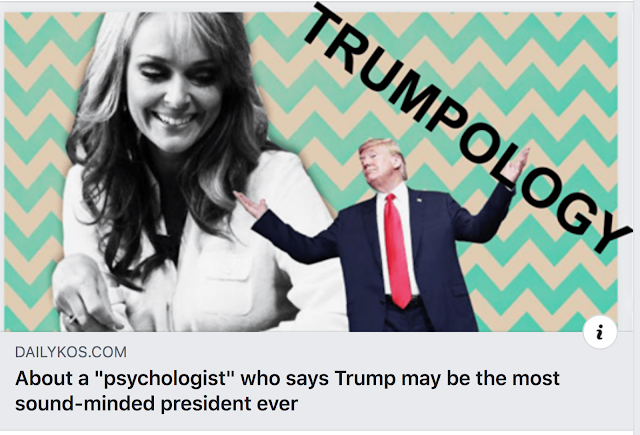 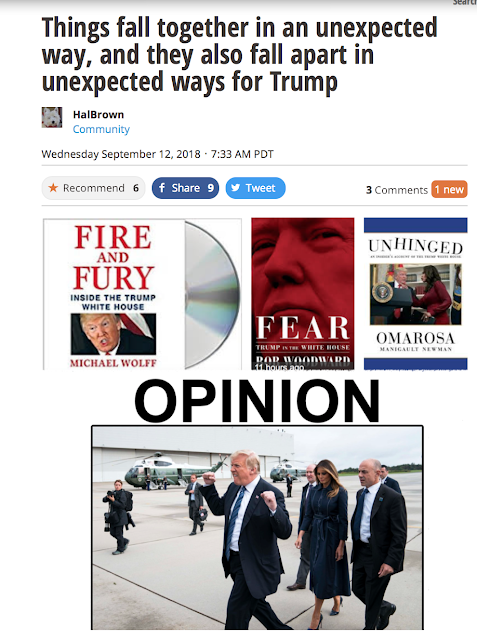 This was my original story. I wrote it last night but thought of a better subject (above)