About Me
Link: Cranberry harvest video


I wish CONSPIRACY THEORY wasn't in the language. The proper term should CONSPIRACY HYPOTHESIS. 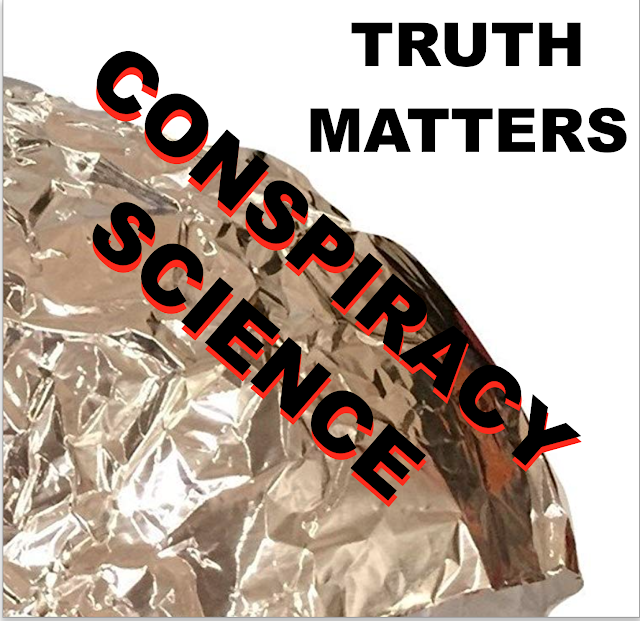 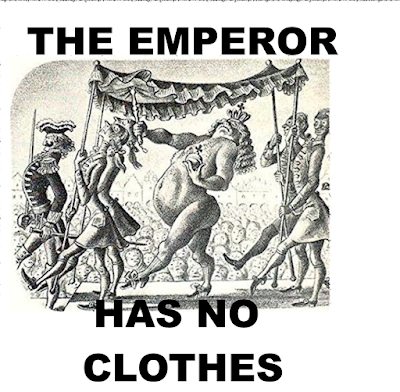 From Sojourners: What Does It Profit ...? The Faustian Bargain in Full Display at Trump's Evangelical Dinner

There are moments when we are also called to name and critique religious hypocrisy, particularly when leaders misuse and abuse their moral authority to prop up and provide cover to immoral leadership.

Dr. Martin Luther King famously said that the church at its best “is not the master or the servant of the state, but rather the conscience of the state.” This precaution is desperately needed in our politics today, particularly in a moment in which President Trump has already given guidance to the IRS to ignore the Johnson Amendment, which prevents religious and nonprofit organizations from publicly endorsing political candidates.


I believe that the majority of pastors (even evangelical pastors) in this country are at some level deeply uncomfortable with the president’s rhetoric, leadership, and character but many are either afraid to speak out due to a fear of dividing and alienating their congregations or because they are hiding behind the conviction that their primary job is to focus on people’s soul salvation and not political matters. Yes, it will take moral courage and even some significant risk-taking to point out and challenge the hypocrisy and sycophancy we are seeing among many evangelical leaders. But the silence of far too many more moderate to conservative evangelical leaders only enables and reinforces the public’s perception that Trumpism and evangelicalism are one in the same. The growing public perception of evangelicals as an overly politicized, intolerant, and nationalistic movement represents a direct threat to the cause of evangelism or spreading the good news of Christ. Therefore resisting the amorality of Trumpism and challenging hypocrisy within the religious right has become an imperative for the witness, integrity, and reputation of the church. Nothing less than the soul of our nation is at stake.

HELP WANTED: Lickspittle lawyer ready to replace Sessions as Attorney General. Who could it be?

A view of Trump from Nigeria:


As flamboyant as Trump can seem, he demonstrates the banality of evil: he's obvious and boring

Outrage Overload You may have missed 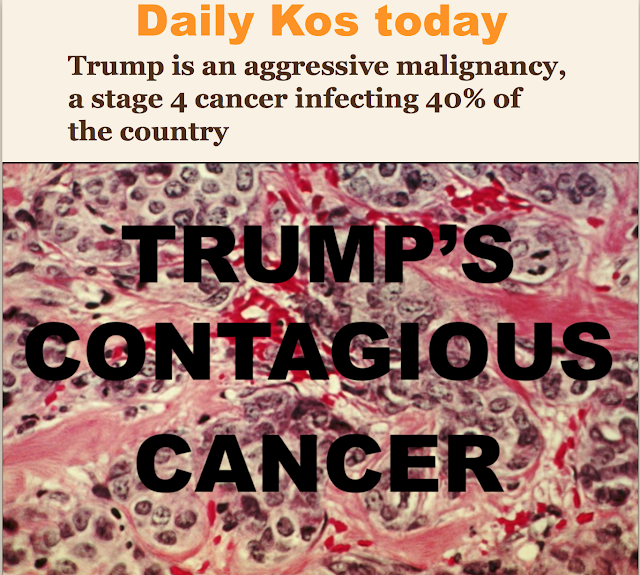 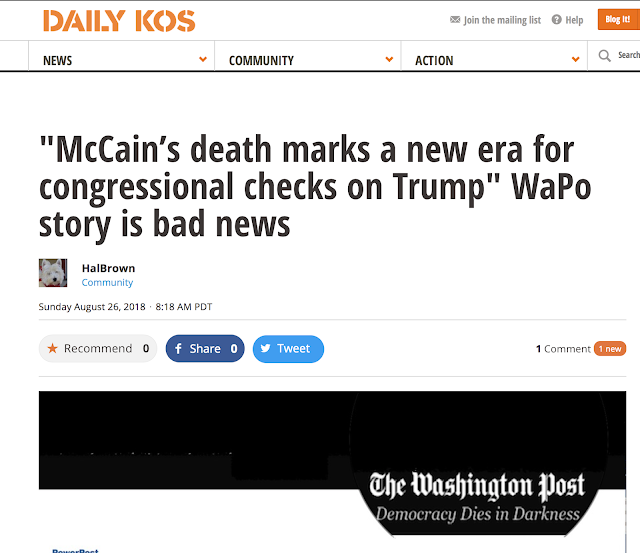 How Far America Has Fallen by Roger Cohen, NYT

The thing with every shocking revelation about Trump is that it's already baked into his image. I've never met a Trump supporter who did not know exactly who he is.
They’ve (Trump suporters) known all along that he’s a needy narcissist, a womanizer, a lowlife, a liar, a braggart and a generally miserable human being. That’s why the “Access Hollywood” tape or the I-could-shoot-somebody-on-Fifth-Avenue boast did not kill his candidacy.
It’s also why the itch to believe that the moment has come when everything starts to unravel must be viewed warily. Sure, Trump sounds more desperate. But who’s the enforcer if Trump has broken the law? It’s Congress — and until things change there (which could happen in November) or Republicans at last abandon a policy of hold-my-nose opportunism, Trump will ride out the storm.

There’s a deeper question, which comes back to the extraordinary Western landscape and the high American idea enshrined in it. Americans elected Trump. Nobody else did. They came down to his level. White Christian males losing their place in the social order decided they’d do anything to save themselves, and to heck with morality. They made a bargain with the devil in full knowledge. So the real question is: What does it mean to be an American today? Who are we, goddamit? What have we become?
Trump was a symptom, not a cause. The problem is way deeper than him.
For William Steding, a diplomatic historian living in Colorado, American individualism has morphed into narcissism, perfectibility into entitlement, and exceptionalism into hubris. Out of that, and more, came the insidious malignancy of Trump. It will not be extirpated overnight.

Embattled President Donald Trump failed spectacularly at a simple photo-op with children in Ohio on Friday.
President Trump toured the Nationwide Children's Hospital in Columbus with First Lady Melania Trump and Health and Human Services Secretary Alex Azar.
As part of the tour, "they took part in a time-honored tradition: sitting in tiny desks alongside adorable kids in hope that the guileless innocence on the little faces surrounding them will take some of the heat off of their craven politicking," in the words of Esquire. 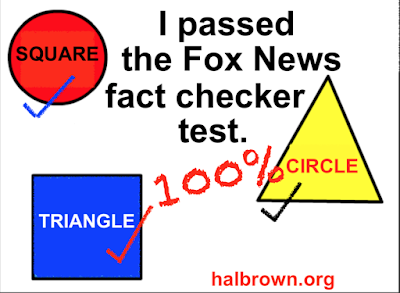 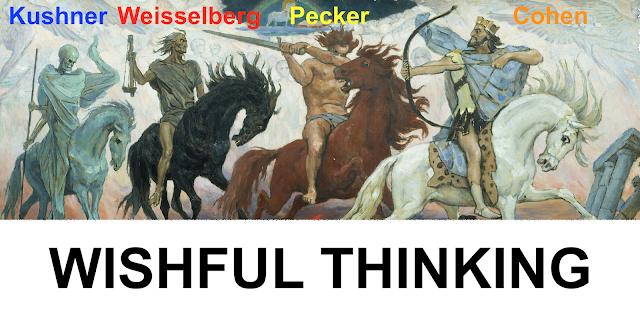 Slate: We Already Know Trump Is Betraying His Country

Investigation or no, the evidence has always been right in front of us. Here it is. 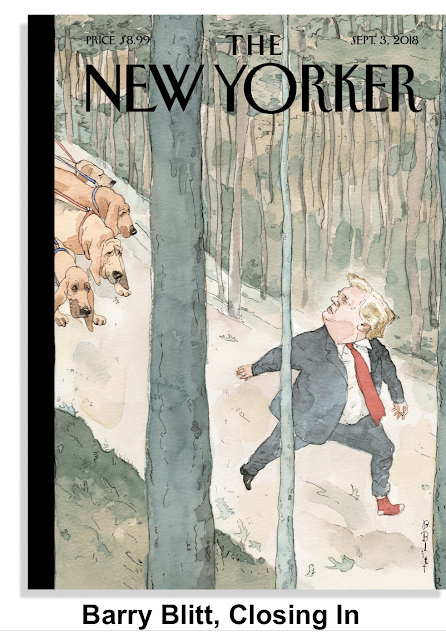 "What everyone should want, and the country needs, is a 'President' capable of comprehending what it means to 'take Care that the Laws be faithfully executed.' Art. II, § 3." George Conway (Kellyanne's husband) 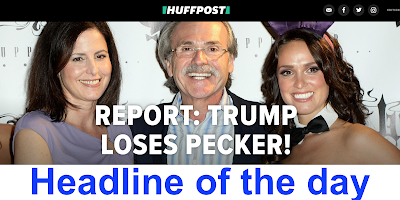 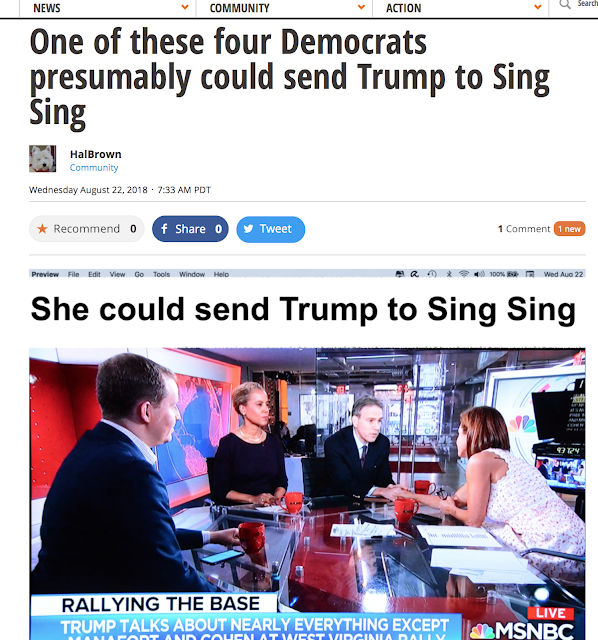 This is what happens when Trump only watches Fox News which I think covered the MTV music awards instead of the ramifications of the Cohen plea to Trump. 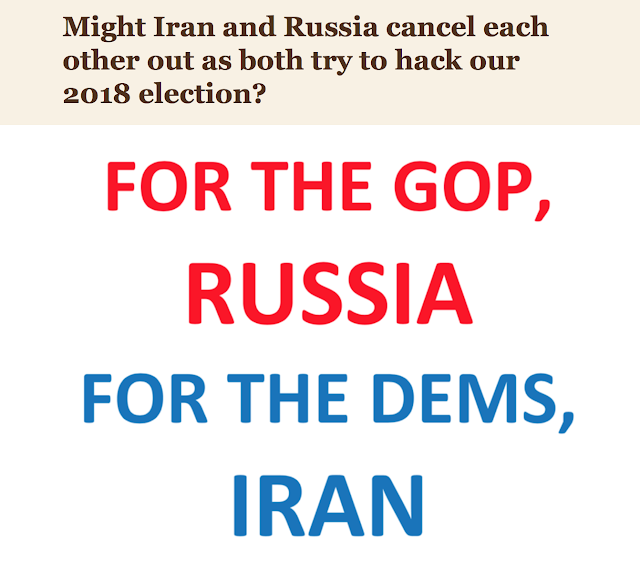 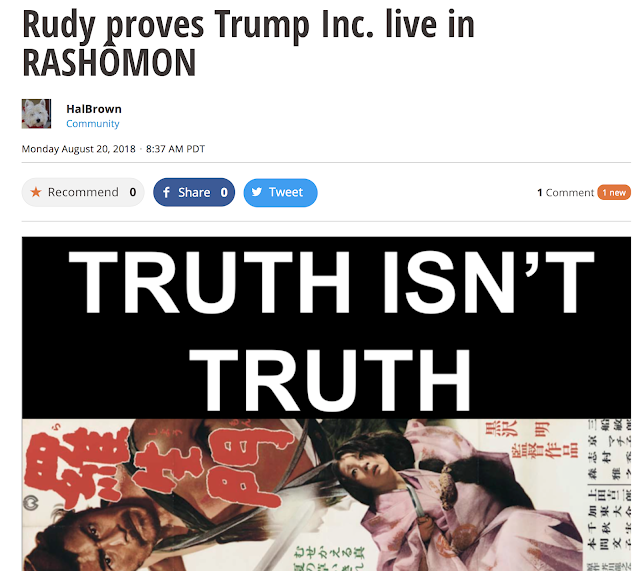 For the uninitiated
QAnon is a conspiracy theory that posits that all presidents elected before Trump were part of a secret global ring of pedophiles that the president is now currently working behind the scenes to expose. The theory also claims that special counsel Robert Mueller is not actually investigating Trump, but is rather doing the president’s work of investigating the purported pedophile ring. RawStory 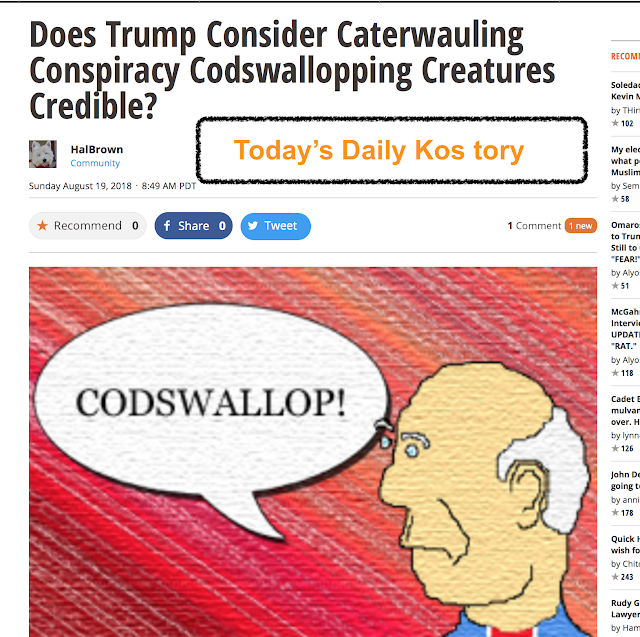 
Why can't Trump stop this by claiming exceutive privilege? Because then it would be taken before a judge by Mueller and the crime fraud exception would be invoked if McCain was testifying to Oval Office criminality. HB 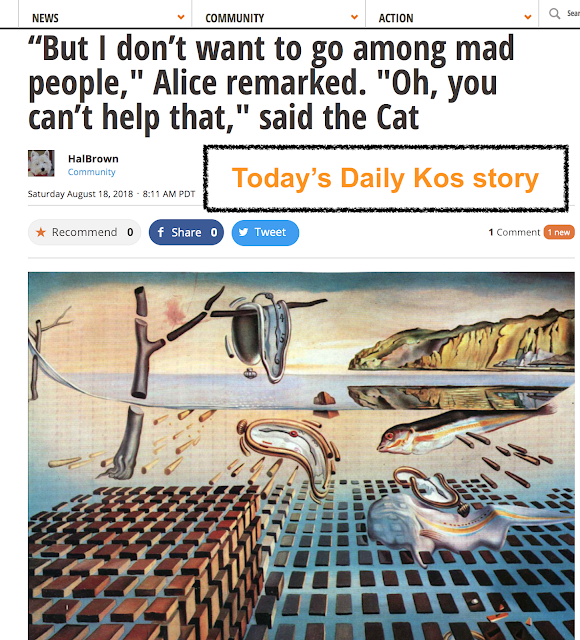 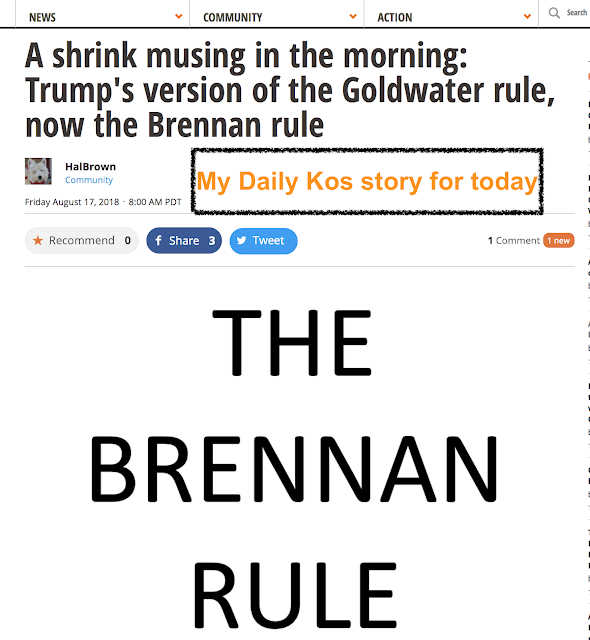 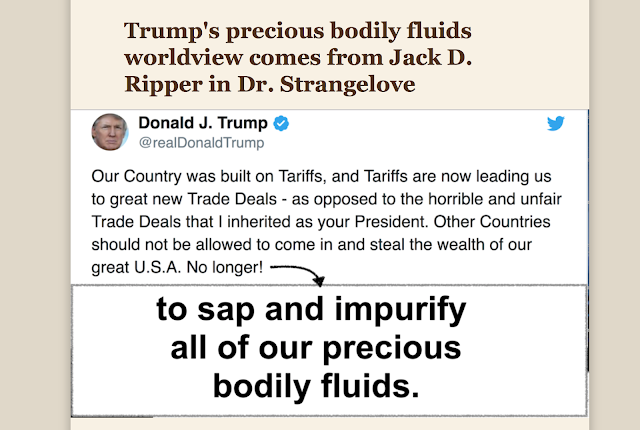 Scarborough said he believes that the president has a pathological need to be liked which leads him to take irrational steps with the sole purpose of getting praise and support from people who already like him.
..
“Donald Trump now is at the point he’s so fragile and cannot ever, ever be in any interaction, any exchange in any room that’s just not pure lionization, canonization, and it defies any left-brain logic. He’s built so fragilely now that he can only exist in an alternative universe, regardless of whether it’s the smart or dumb political thing, where he is basically pillowed around by that 30 percent.” Donnie Deutsch
...
“They just sort of erupt out of him. He learned to do one extraordinary thing during the campaign, which is the sort of stream-of-consciousness rallies in which for a segment of the electorate, they are catnip, they are amphetamines. They are whatever you — some kind of drug that really pump people up — and that’s really what he knows how to do. So that’s what he’ll continue to do, and it turns out the other 60 percent, more and more, but this is not just all some diabolical plot. This is a man out of control.” Eugene Robinson

'If they take the House, he wins big': Trump loyalists see upside in impeachment: Politico

I hope Trump ends up believing this because I'll enjoy watching him decompensate as the Democrat controlled House Judiciary Committee led by Congressman Jerrold “Jerry” Nadler issues subpoenas and takes testimony and makes a compelling case against Trump for everything from conspiring with the Russians to violating the Emoluments Clause. If the Senate say at 50/50 R and D doesn't convict it probably would fall a few votes short of the 2/3rd super-majority. Trump still will be branded as someone who barely dodged being removed from office. He would have to run for a second term having solidified his base, but having lost so many moderate Republicans he would loose in a landslide.

It is worth noting that The House members present the prosecution case, and Trump would mount a defense with his own attorneys. Rudy? That would be amazing.

There is no comparision to Clinton because his impeachment was bogus. A blue dress is hardly the same as conspiring with the Red Menace. 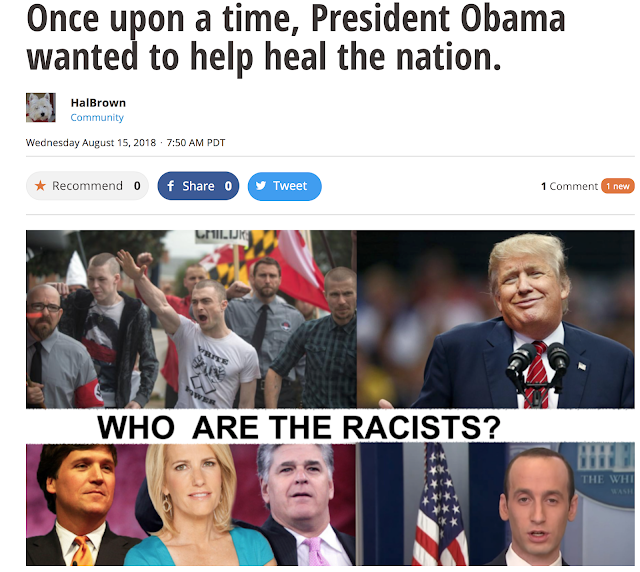 New construction has sent a flood of new apartments onto the market. A month's free rent has become standard.-------

'The Greatest Intelligence Operation of Our Time': Investigative Journalist Details How Trump Has Been Compromise by Russia for Years 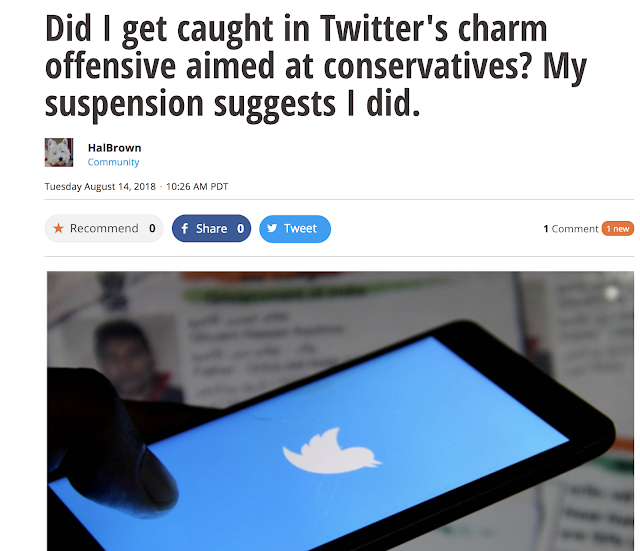 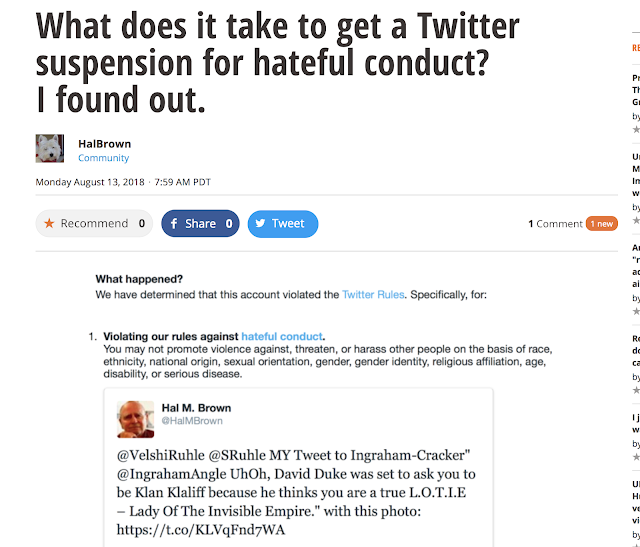 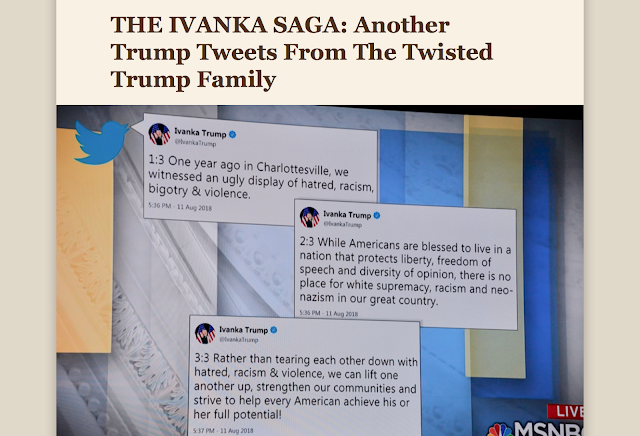 The Lesson of Omarosa’s New Trump Book - The New Yorker


EXCERPT: Trump’s hard-core supporters have proved to be morally malleable. They are unconcerned about a wide array of his character failings; there’s no reason to suspect that this one would have been different.

Trump’s personal history was a bramble of backward racial ideas long before the tiki torches were lit in Charlottesville last summer. His personal history yields an impressive greatest-hits collection that would include him beginning his Presidential campaign by conflating Mexicans with rapists and later stating that Judge Gonzalo Curiel should not preside over the Trump University fraud suit because of his Hispanic heritage. Trump asked a friend of Karen McDougal, the former Playmate with whom Trump had an extramarital affair, if she liked “big black dick.” There is also, of course, the matter of the Justice Department accusing the Trump family firm of discriminating against African-American renters in the seventies (Trump settled the suit without admitting guilt), his racist public assault on the Central Park Five, and his use of birtherism to propel himself into national politics.

In a more recent spree, he questioned the intelligence of Representative Maxine Waters, LeBron James, and the CNN host Don Lemon—each of whom is black—and (again) assailed African-American football players.

The issue of whether Trump used the word in question is almost completely inconsequential, yet the fact that it does not matter is itself of great consequence. 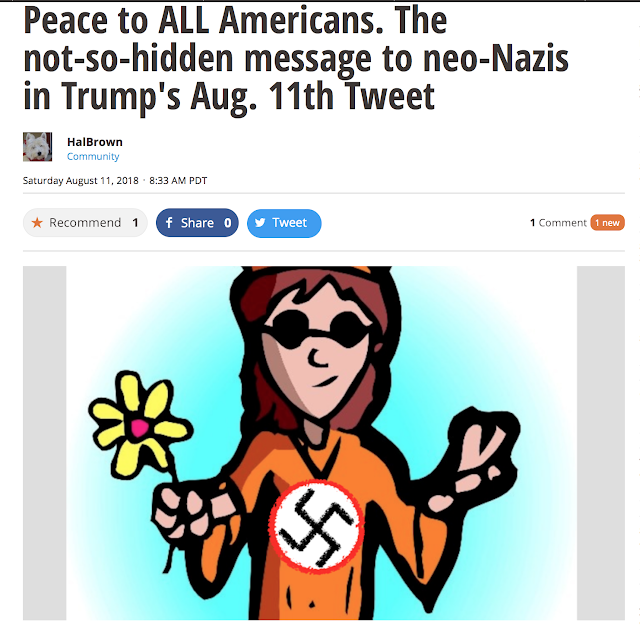