May 4, 2018
Breaking news: Pence's doctor resigns after reports of concerns about Jackson's conduct 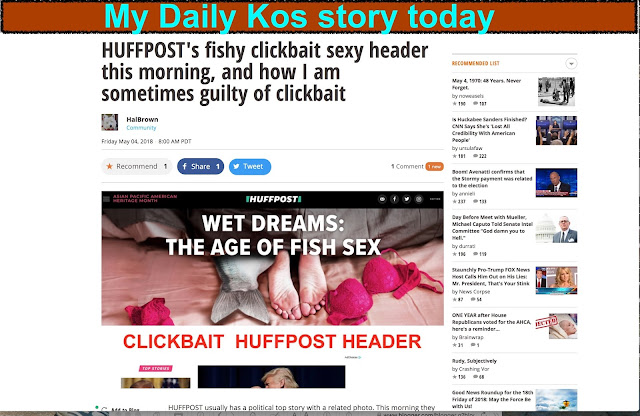 Excerpt: Last week's summit between South Korean President Moon Jae-in and North Korean leader Kim Jong Un produced an official declaration that is now being studied by experts around the world. But more mundane-seeming details are also being devoured.

For example, one South Korean newspaper published an article this week that was largely based on photographs of Kim and Moon's shoes. (See below)

A reasonable reader might wonder if such details matter, but keep this in mind: Despite being the supreme leader of North Korea, many aspects of Kim's life are unknown. Until his unannounced trip to Beijing in March, there was no indication he had even left the country since taking over from his late father in 2011.

That means virtually all the images and video of Kim scoured by foreign analysts since he took power have come from North Korean state media. Those outlets are unlikely to show Kim in anything but the most flattering light — indeed, many photographs of Kim appeared to have been digitally altered.

An accurate image of or detail about Kim could provide some important clues about his health and other physical characteristics. These are details that could actually be useful for crafting policy toward North Korea. If Kim were in seriously bad health, for instance, it would raise questions about his leadership and the line of succession in Pyongyang. 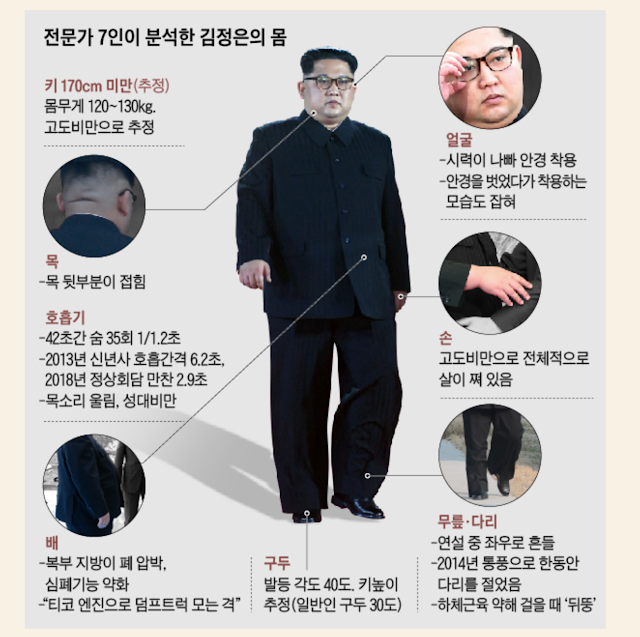 On the 27th, Kim Jong-un was revealed to the public on the status of the North Korean state secretary. One day, Kim Jung Eun's move was broadcast on TV on a full HD camera. It is the first time Kim Jung Eun has been exposed to external media cameras for such a long time in the Kim family of three generations. Kim Jung-eun took the toilet to care for "biometric information" security, but could not avoid "physical exposure".

◇ Breath once every 1.2 seconds after walking 200 meters
Kim Jong - eun had difficulty moving about 200m from the north side of Panmunggak to the house of peace in the south.
When I signed up for a real Peace House guest book, I breathed a sigh of relief. I stopped breathing or breathed deeply during the conversation.

In the video, Kim Jung Eun is smaller than Moon Jae-in. Moon is 172cm tall. Kim Jung Eun's case is known as 170cm. In fact, Kim Jung Eun seemed to be 2 to 3 cm smaller than Moon President when President Moon and Kim Jong Eun were standing side by side. However, the story is different when it reflects the "height" shoes. The foot angle of Kim Jung Eun is 40 degrees. The angle of the shoe that Mr. Moon was wearing was 30 degrees. The difference of 10 degrees is ① when there is a lot of flesh on the instep ② when the '

Kim Jong-kyoung, chairman of the shoe shop, said, "As the insole is structurally inside the shoe, the slope of the shoes and other parts that catch the center of gravity increases." He said, "Kim Jong-eun's outer appearance is about 4cm, which is a little higher than the general shoe's surface (3 ~ 3.5cm)." Instead, the height of the rooftop is about 4 ~ 5cm, did. The key difference between President Moon and Kim Jong Eun is estimated to be more than 5cm, not 2cm. 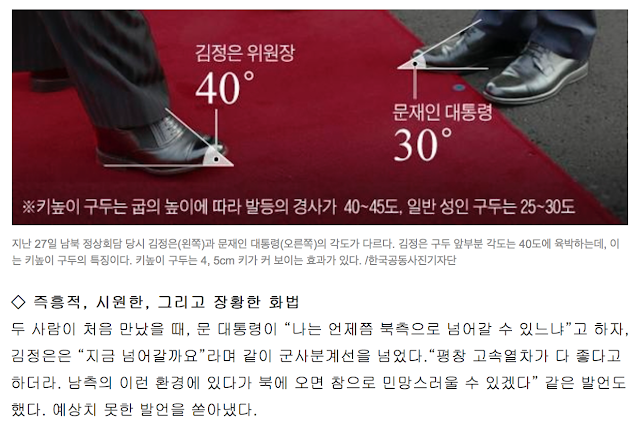 Kim Jung-eun (left) and Moon Jae-in (right) were at different angles at the inter-Korean summit on June 27. Kim Jung-eun's frontal angle of the shoe is approaching 40 degrees, which is characteristic of KIEP NO. The height of the shoes has the effect of looking 4 or 5 cm tall. / Korea Co Photo Reporters

When the two first met, President Moon said, "When will I be able to cross over to the North?" Kim Jong - eun crossed the Military Demarcation Line, saying, "Let 's go now. I can say that if I come to the north in such an environment of the South, it will be really frustrating. " I made an unexpected remark.

Kim Hye-ry, a lecturer at the speech and presentation specialist, said, "When Kim Jong-eun repeatedly used 'I talked about before' and 'I lost 11 years', I talked with impatient and emotional rather than pre- I have used the adjectives and adjectives that reveal emotions such as 'open mind' and 'earnestly'. 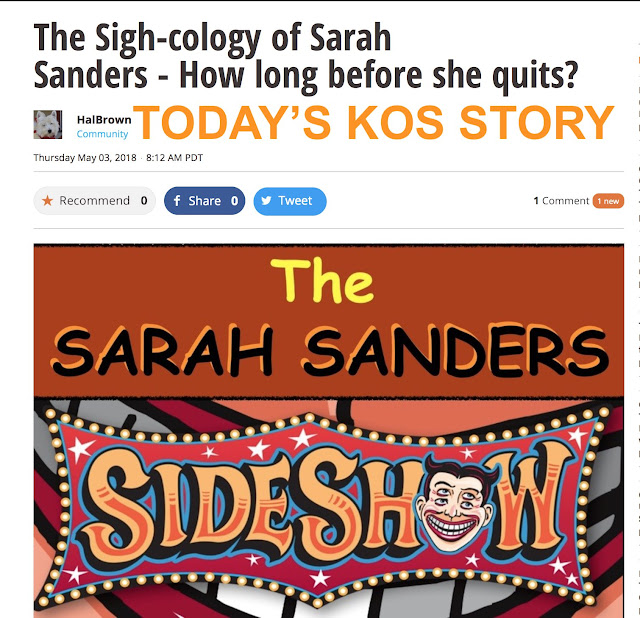 Hill: Giuliani calls for Sessions to 'step in' on Cohen investigation

Giuliani: I Don’t Believe That Michael Cohen Was Wiretapped 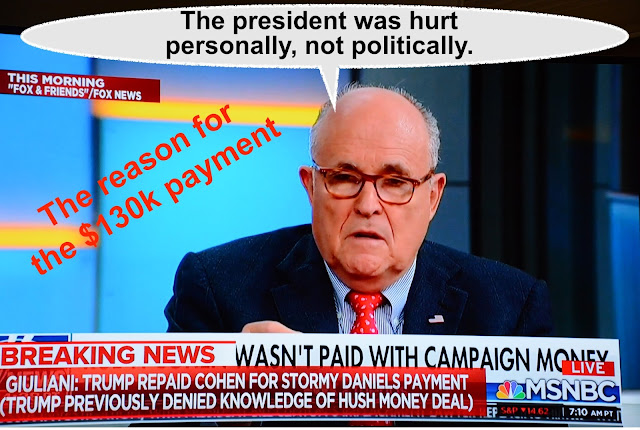 And then there's KellyAnne Conway's husband:


George Conway Appears To Shut Down Rudy Giuliani’s Claim About Stormy Daniels Payment This must be an interesting marriage.


Stormy Daniels’ lawyer may have stolen away Michael Cohen’s ‘get out of jail free card’ Wednesday night.

Can you hear these silent GIFs? You may have a new form of synesthesia. 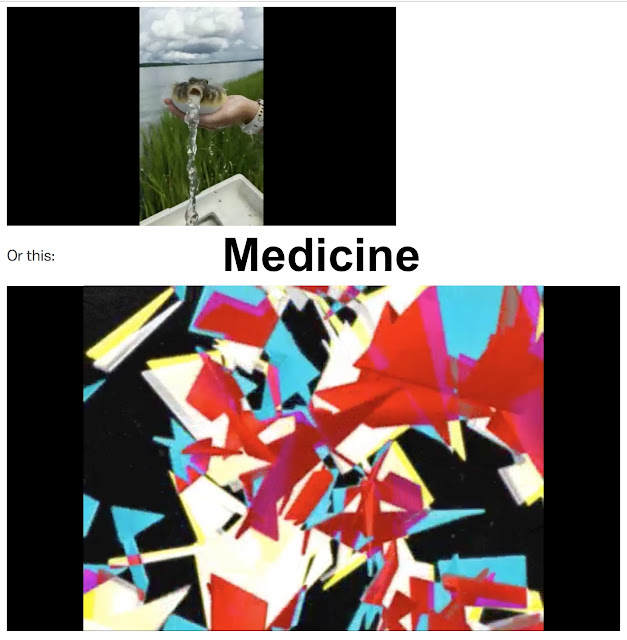