On Trump pandering to the far right: "his base is important to him, it's like his binky."

Why did TASS report this before it hit the American MSM (Agence France-Presse even had it before it the the USA)? It is about the phone call Trump made to congratulate Putin for winning the rigged election. Was this a cover-up? Was it something Trump didn't want made public? Well, tough break, now Sarah Sanders had to cobble together an answer. I expect more fallout from this as our allies weigh in. Another question is what Russia hawk John Bolton will have to say about having Putin as a White House guest.

More:http://tass.com/politics/997292
I put this article on Daily Kos where it was selected to be on their recommended list. You can read the numerous comments here. 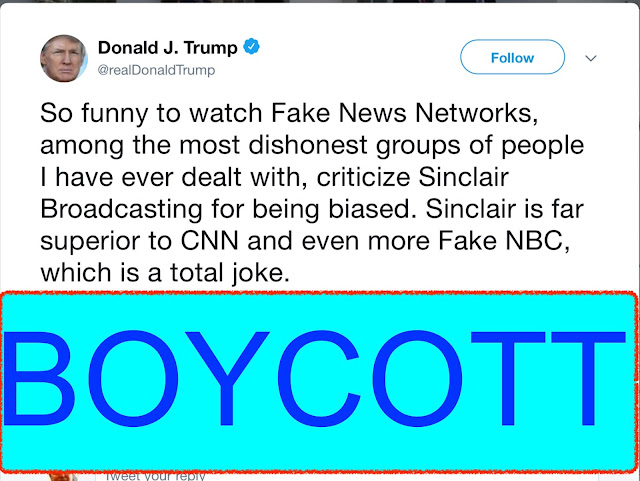 My station is KATU, channel 2, an ABC affiliate in Portland, Oregon.

List of stations owned or operated by Sinclair Broadcast Group — From Wikipedia, the free encyclopedia

This is in HUFFPOST: Sinclair Broadcasting Orders Local Anchors To Record Bizarre ‘Hostage’ Video: Supercut shows broadcasters across the nation reading the same script, and it is also is being covered on MSNBC (screenshots below).

List of stations owned or operated by Sinclair Broadcast Group

From Wikipedia, the free encyclopedia
Sinclair Broadcast Group is the largest owner of television stations in the United States, currently owning or operating a total of 173 stations across the country (233 after all currently proposed sales are approved) in nearly 80 markets, ranging from markets as large as Washington, D.C. to as small as Steubenville, Ohio.
The stations are affiliates of various television networks, including ABC, CBS, NBC and Fox as well as numerous specialty channels.
Many stations are owned outright by the company, but many others are affiliated through other companies through a local marketing agreement, a concept Sinclair pioneered in Pittsburgh in 1991 when the Federal Communications Commission (FCC) forbid duopolies. (The stations involved in the initial deal, WPGH-TV and WPTT — now WPNT— are now both owned by Sinclair outright.) Sinclair has done this with various companies, most notably Cunningham Broadcasting and Deerfield Media.
In March 2018, Sinclair Broadcasting Group required their news anchors to read a prepared script charging a proliferation of "fake news" in the media, suggesting that attacking President Donald Trump's view of events was "extremely dangerous to our democracy." Sinclair's editorial approach leans heavily toward conservative ideals.

Hi, I’m (A) ____________, and I’m (B) _________________…
(B) Our greatest responsibility is to serve our Northwest communities. We are extremely proud of the quality, balanced journalism that _____ News produces.
(A) But we’re concerned about the troubling trend of irresponsible, one sided news stories plaguing our country. The sharing of biased and false news has become all too common on social media.
(B) More alarming, some media outlets publish these same fake stories… stories that just aren’t true, without checking facts first.
(A) Unfortunately, some members of the media use their platforms to push their own personal bias and agenda to control ‘exactly what people think’…This is extremely dangerous to a democracy.
(B) At ______  it’s our responsibility to pursue and report the truth. We understand Truth is neither politically ‘left nor right.’ Our commitment to factual reporting is the foundation of our credibility, now more than ever.
(A) But we are human and sometimes our reporting might fall short. If you believe our coverage is unfair please reach out to us by going to _________  and clicking on CONTENT CONCERNS. We value your comments. We will respond back to you.
(B) We work very hard to seek the truth and strive to be fair, balanced and factual… We consider it our honor, our privilege to responsibly deliver the news every day.
(A) Thank you for watching and we appreciate your feedback.

Yesterday
Recent diaries:
Posted by Hal Brown at 11:56:00 AM