Monday, April 23, 2018
BREAKING: Stay Tuned. Her story also addresses the predatory behavior of Trump. He offered her $10,000 to come to his room. He kissed her on the lips without permission. Here's the story and the video of the Ari Melber interview. 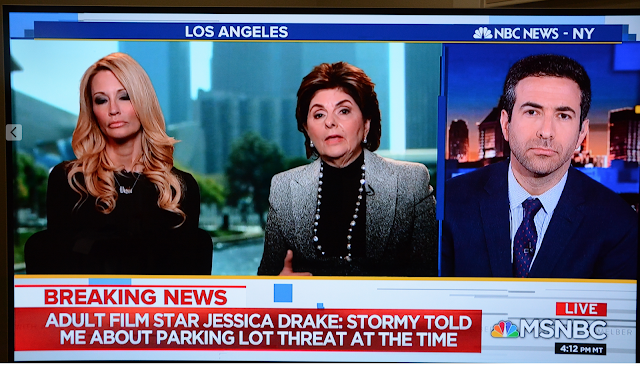 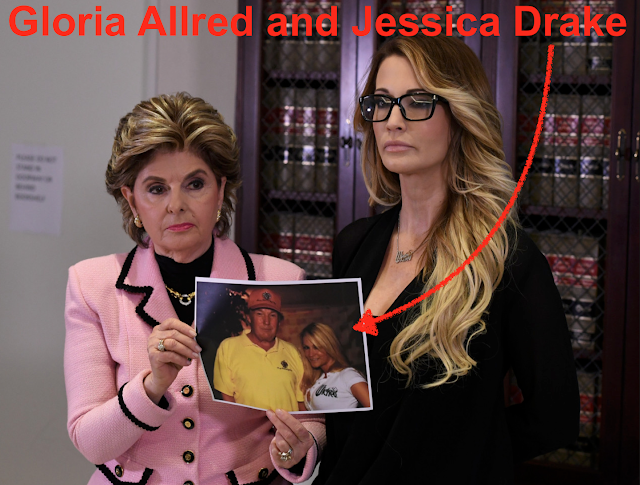 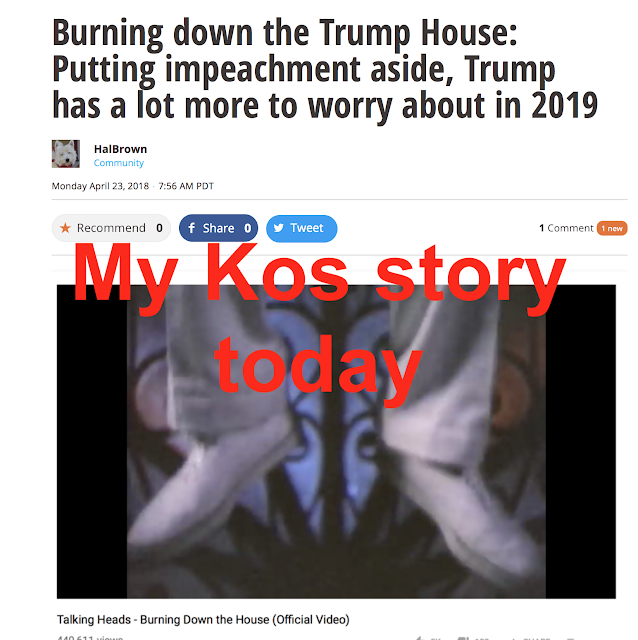 ‘Nowhere near close’: The bond between Trump and Giuliani is less than it appears - Washington Post . 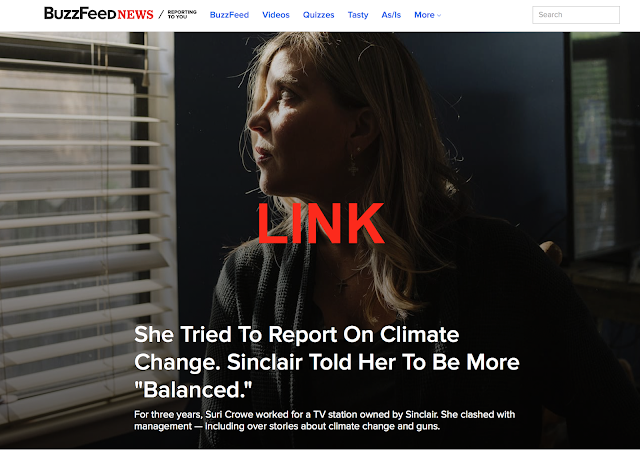 On the surface, the president and the man he has now turned to for a defense against special counsel Robert S. Mueller III’s investigation of alleged Trump campaign ties with Russia share some similarities. Trump and Giuliani are both street-savvy New Yorkers, Yankees fans and political populists with a passion for straight, blunt talk.
But the notion that Giuliani and Trump share a special bond does not comport with the recollections of people who worked closely with both men in the 1980s and 1990s, when the mayor and the real estate developer were two of the biggest names in the nation’s largest city.
“They were nowhere near close in spirit or how they operated,” said Cuker, a dealer in classic cars who was friends with Giuliani for many years. “Back then, Donald was more concerned with his image, his playfulness, a different kind of narcissism, whereas Rudy was much more conservative, more drawn into himself. I never saw a real bond between them. Whatever relationship they had was convenient for both.” 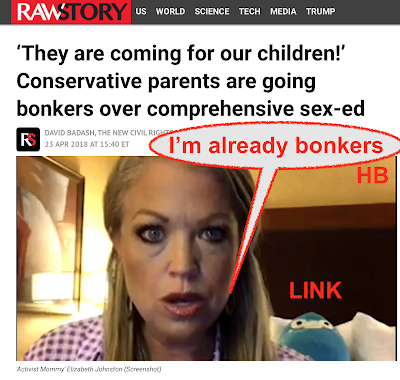 Both men relished being in the public eye, going to great lengths to build their images. Both were mainstays in New York tabloid headlines and regular guests on David Letterman’s TV show and Don Imus’s and Howard Stern’s radio broadcasts.
“Rudy was prepared to work very hard for applause and so was Donald Trump,” said Wendeen Eolis, a former adviser to Giuliani who runs a legal consulting firm in Manhattan. “Rudy became very well known in the later years for being not just blunt, but also critical for effect, and I think it’s fair to say they share that trait.”
But Eolis said the two men were too different to have been buddies. “I believe Donald is savvy about encouraging relationships, both for his business purposes and his personal convenience,” she said. “I do not recall the name Donald Trump coming to Rudy’s lips in the consideration of a government initiative, only as a reaction to coverage of him.”


Others who worked with the two say it was Trump who sought favor from the mayor, although at least on paper the relationship went both ways. 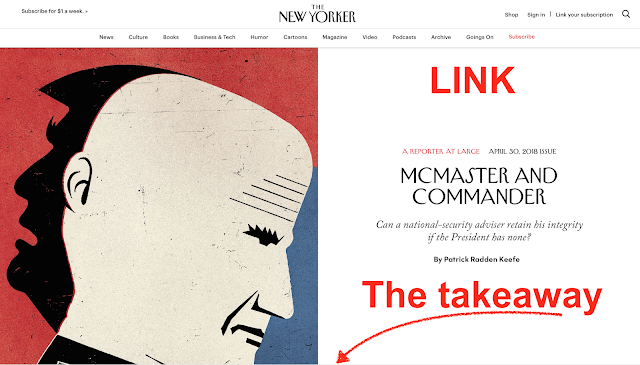 “To McMaster and his colleagues, Mattis’s apparent attempts to limit Trump’s options verged on insubordination,” the New Yorker explains. “One senior N.S.C. official told me that Mattis perceives his role as playing ‘babysitter’ to the President.”


Erin Simpson, a defense analyst who once worked with McMaster, tells the New Yorker that one problem for Trump’s national security team is that he always seems to favor taking the most belligerent and drastic action available to him — which may explain why Mattis sought to limit his range of available strategies. Simpson described this as a “Goldilocks problem,” in that if Trump is given a range of options that range from “too cold” to “just right” to “too hot,” he will always pass over the “just right” option in favor of the hottest one on the table. (RawStory) 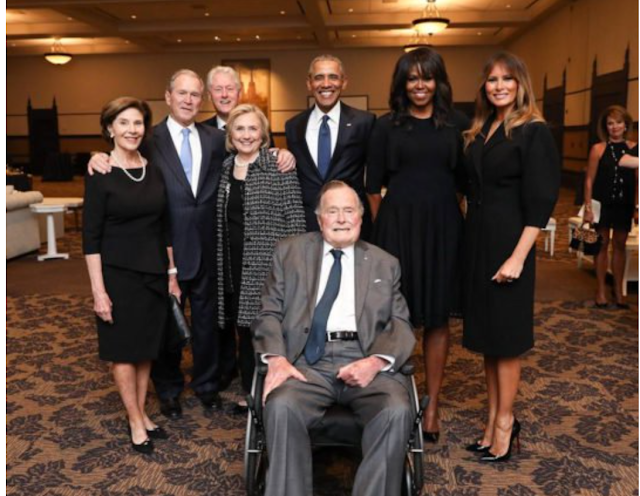 Trump was right not to have attended Barbara Bush's funeral because she hated him. I think he would have gone if he thought if would be a fun way to spend the day, where he would be the center of attention. That's difficult to do at someone else's funeral. Easy to do at your own funeral. But then unless you believe you can be in Heaven looking down, you can't enjoy the fawning eulogies.  Had he gone he would have been trying not to show how he was gloating on the inside because someone on his enemy list was dead.

Using The word class in the same sentence with the president's name is only accurate if the word is prefaced by "has no." Thus to deomonstrate this while TV includng Fix had extensive coverage of the funeral, Trump was keeping busy trying not to be ignored by Tweeting and of course since it was a nice day, playing golf. Melania, the enigma of a wife, showed that she is the only one that has any class in the high profile Trump family of Donald Jr., Eric, and Ivanka. Melania even brought regular White House staff who knew Barbara Bush because they worked there during her husband's administration.

Pictures show her looking relaxed and, unsual in other photos, having a geniune rather than forced smile.  HB

First Read is from Salon: 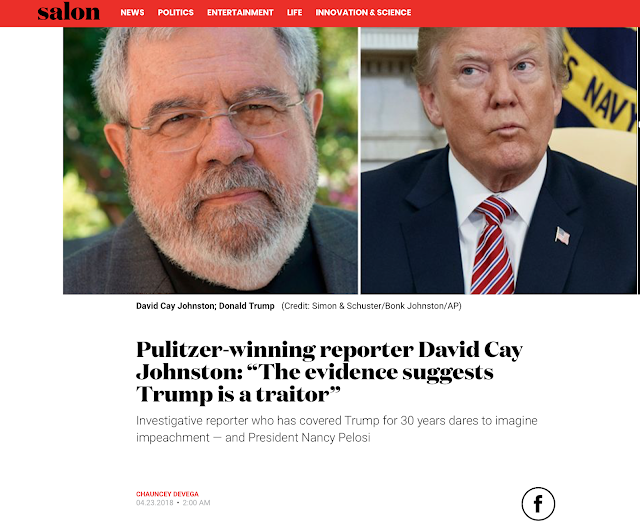 Cut to the chase (excerpt):


If the overwhelming conclusion of the Mueller report is that the Russians put Trump in the White House, then you face a second terrible problem: What do you do about Mike Pence who is also the beneficiary of Russian interference?

If the Congress impeaches and removes Trump and Pence, it will only be because the Democrats control Congress. So unless something else changes, we get President Nancy Pelosi. You can just imagine the people who will be in the streets screaming coup d’état if she's president. I think the only way to address that is for her, or whoever is speaker, to announce they will be a caretaker president who is not going to do anything extreme.

There is no good ending to the story. America will survive this, we'll get past it, but whenever Trump leaves, there's no good ending. If Trump is removed by impeachment or by the voters, whether in a Republican primary or a general election, I know what he will do. He's already told us what he will do by his actions. Trump will spend the rest of his days fomenting violence and revolution in this country.

He's be careful not to directly say "revolution," but he will call the government illegitimate. He might even call it criminal, since he called Democrats who didn't stand up during his State of the Union speech treasonous. If they're going to impeach Trump, I believe they have to have a plan to indict, try, convict and imprison him. But Trump will be a role model for some people and there may well be violence over it.

As Malcolm Nance and others have warned, Russia's interference in the 2016 election and likely infiltration of Trump's inner circle could be one of the worst intelligence disasters in American history, a failure of Benedict Arnold or Rosenberg proportions.

Trump's morning Tweetstorm was unusual because, unlike his usual 3:00 AM venting, for some reason these Tweets were put on at around 9:00 AM. What's with that? What's on FoxNews at 9:00 AM? 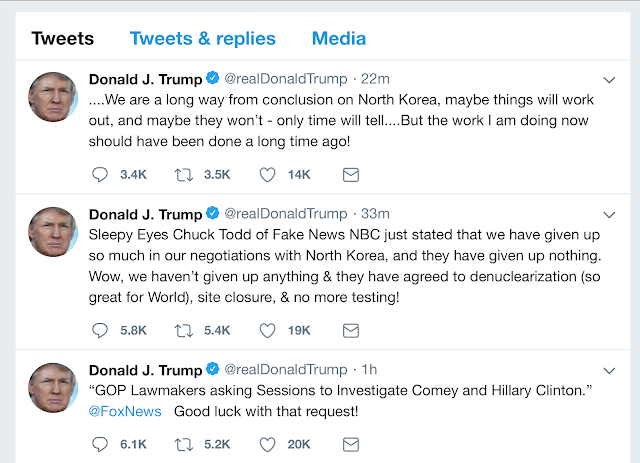 My first edit on a Wikipedia page:

I added the last line because there was nothing on Mike Kennedy's Wikipedia page about this story. This is what Wikipedia sent me:

Hello, HalBrown44, and welcome to Wikipedia! I hope you like the place and decide to stay. Here are some pages you might find helpful:


I hope you enjoy editing here and being a Wikipedian! Please sign your name on talk pages using four tildes (~~~~); this will automatically produce your name and the date. If you need help, please see our help pages, and if you can't find what you are looking for there, please feel free to ask me on my talk page or place {{Help me}} on this page and someone will drop by to help. Red Director (talk) 15:28, 22 April 2018 (UTC)

This led me to write this story for Daily Kos: 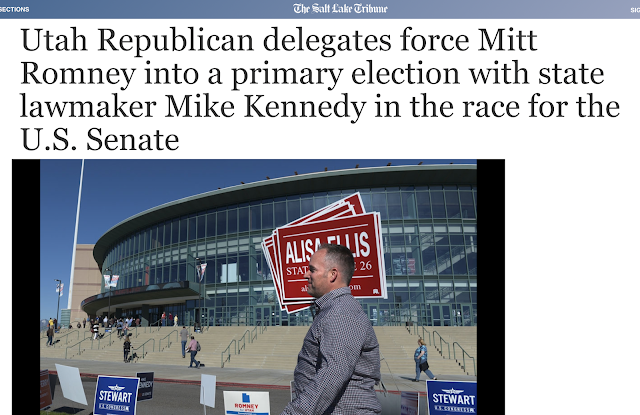 Utah Republican delegates force Mitt Romney into a primary election with state lawmaker Mike Kennedy in the race for the U.S. Senate
Who is Mike Kennedy? As usual, we expect Wikipedia to give us a general idea, and generally they are up to the minute in updating their profiles. Not so today.
Bragging rights: A month ago I registered on Wikipedia and thus was able to be a contributor. This morning I made my first edit, the last entry below is mine.

When District 27 incumbent Republican Representative John Dougall ran for state auditor and left the seat open, Kennedy was selected as one of two candidates from five by the Republican convention for the June 26, 2012 Republican primary which he won with 2,586 votes (52.9%)[6] and won the November 6, 2012 general election with 14,335 votes (92.1%) against Constitution candidate Scott Morgan.[7]
Kennedy attracted media attention when in a meeting of Utah's Health Reform Task Force (as an argument against the state expanding Medicaid) he cited examples of medical malpractice as evidence that "access to hospitals" was killing people.[8] During the 2014 general election, Kennedy faced Democratic nominee William McGree, winning with 6,997 votes (88.4%).
During the 2016 legislative session, Kennedy served on the Public Education Appropriations Subcommittee, the House Health and Human Services Committee, and the House Political Subdivisions Committee.[9]
On March 9, 2018, Kennedy distributed a letter to members of District 27 announcing that he would not seek re-election for the Utah House of Representatives. He instead opted to run for the U.S. Senate, winning a place in the June primary against Mitt Romney.
On April 22, 2018, Kennedy came edged out Mitt Romney at the Republican Convention with 50.88%. Romney came in a close second with 49.12%. Kennedy will now compete with Romney in a primary set for June 26. [10]


This is what Romney’ s primary challenger had to say after he beat Romney:

"This is terrific for the people of Utah, and I really want to thank the delegates who stayed so late to give me the kind of boost that I got here today," Romney said, standing on the convention floor after the proceedings were adjourned. "We're going to have a good primary."
Kennedy, who had framed the race as David vs. Goliath, said when asked why he had edged out Romney in the vote that he wasn't sure.
"I don't know," Kennedy said when asked why he thought his message appealed more to delegates than Romney's. "I don't know -- it's just my message."
"We've got 60 days to reach out to as many voters as we can."

From what I can tell looking at Kennedy’s legislative initiatives he is a typical conservative. For example, he proposed that approximately 7.7 acres of the northeast corner of the Utah State Developmental Center campus to be leased for commercial purposes in accordance with the master plan.
As a medical doctor and a lawyer it makes sense that he would be involved in health-related legislation, and as a Utah conservative he wouldn't be supportive of making health care more accessible:
.   This bill for example:

Romney’s bid for the seat was endorsed by President Trump and retiring Sen. Orrin G. Hatch (R-Utah). Aside from this, I can’t find any reporting about whether or not Kennedy took a position on Trump or his policies. It remains to be seen as this race gains national attention and voters are polled prior to the actual primary whether Romney’s complete about-face when he wanted to be Trump’s Secretary of State after saying this led to his losing:

“Donald Trump is a phony, a fraud. His promises are as worthless as a degree from Trump University. He’s playing the members of the American public for suckers. He gets a free ride to the White House, and all we get is a lousy hat.”

Depending on how Romney and Kennedy run their campaigns and whether Trump becomes an outspoken endorser of Romney, this could be yet another indication of whether Trump is losing support among conservatives.
Posted by Hal Brown at 6:21:00 AM