Trump Tweeted like the madman he is this morning. His blaming President Obama and attacking Hillary Clinton is no news. He jabs President Xi and The Washington Post in his Twitter tantrum. Nothing shocking there. However, actually naming Putin, not merely Russia, as responsible for “Animal Assad's” chemical attack, that is news. Joy Reid said it was like he said Voldemort out loud.
This is getting major coverage, at least on MSNBC. It will be interesting to see how Fox News covers the story.

The world now awaits to see if Putin has at long last crossed a Trump red line and how the United States will respond. How far will Trump dare to go to incur the wrath of Vlad?
Read the Tweets bottom to top to see how Trump’s anger developed over the course of two hours.
Trump's reference to the Washington Post (the poorly written newspaper, a criticism from the grammar-challenged president) is about ‘When you lose that power’: How John Kelly faded as White House disciplinarian.


Trump's reference to the Washington Post (the poorly written newspaper, a criticism from the grammar challenged president) is about ‘When you lose that power’: How John Kelly faded as White House disciplinarian.

Not known to have the patience or incliation to read a long article, it's possible Trump never read beyond the photo, and he didn't have to:

EXCERPT: After White House Chief of Staff John F. Kelly pressured President Trump last fall to install his top deputy, Kirstjen Nielsen, atop the Department of Homeland Security, the president lost his temper when conservative allies argued that she wasn’t sufficiently hard line on immigration. “You didn’t tell me she was a [expletive] George W. Bush person,” Trump growled.

After Kelly told Fox News Channel’s Bret Baier in a January interview that Trump’s immigration views had not been “fully informed” during the campaign and had since “evolved,” the president berated Kelly in the Oval Office — his shouts so loud they could be heard through the doors.

And less than two weeks ago, Kelly grew so frustrated on the day that Trump fired Veterans Affairs Secretary David Shulkin that Nielsen and Defense Secretary Jim Mattis both tried to calm him and offered pep talks, according to three people with knowledge of the incident.

“I’m out of here, guys,” Kelly said — comments some interpreted as a resignation threat, but according to a senior administration official, he was venting his anger and leaving work an hour or two early to head home.
The recurring and escalating clashes between the president and his chief of staff trace the downward arc of Kelly’s eight months in the White House. Both his credibility and his influence have been severely diminished, administration officials said, a clear decline for the retired four-star Marine Corps general who arrived with a reputation for integrity and a mandate to bring order to a chaotic West Wing. 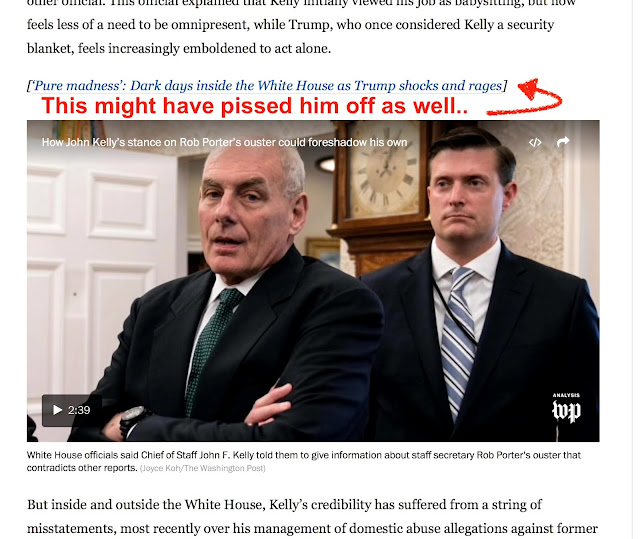 America's racism and narcissism is the reason why its foreign affairs are a mere projection of it's domestic ills.

EXCERPT: America's malignant racism and narcissism explain why President Donald Trumpcan get away with crass phrases like "America first" and "sh****le countries". Both narcissism and racism account for why the US has cared more about what happened to four Americans in Libya in 2012 than it has about Boko Haram in Nigeria or Syrian forces bombing innocent children in Eastern Ghouta. America's racism is at work when the US turns a blind eye to atrocities such as the humanitarian crisis born of Myanmar's ethnic cleansing of some 700,000 Rohingya now in Bangladesh. America's narcissism is why is there such a stark distance between America the ideal superpower, who claims to be "the leader of the free world," and America the narcissistic superpower, who only cares about herself.

Religion: A Strange Drawing Found in Sinai Could Undermine Our Entire Idea of Judaism

Is that a 3,000-year-old picture of god, his penis and his wife depicted by early Jews at Kuntillet Ajrud?


This Is How the Future Will Taste: 6 High-Tech Foods That Are Changing the Way We Eat and Drink

Technological innovations promise to make the food we eat more ethical and sustainable without sacrificing taste.

US Power Will Decline Under Trump, Says Futurist Who Predicted Soviet Collapse


We talked to Nobel Prize-nominated Johan Galtung, who predicted that someone like Trump would win the US, and that it will trigger a decline in power.

Accordingly, one of the more reliable polling average methodologies, at Five Thirty Eight, adjusts Rasmussen’s findings to counter-act the “house effect.” So Friday’s 47 percent Trump approval rating goes into the averages as 42 percent. Another polling average source, Real Clear Politics, does not adjust polls for “house effects,” but similarly shows Rasmussen as being off-kilter (the current RCP average for Trump’s approval ratings is 41.5 percent). In case you want to dismiss Five Thirty Eight as a “liberal” site (despite its against-the-grain predictions in 2016 that Trump had a real chance to win), it should be noted that RCP’s management is quite conservative.
Touting Rasmussen as the only “honest” poll was not enough for Trump, though. In a radio interview today, the president suggested that his job approval number should have been higher:

What we cannot really know, of course, is whether the president really believes what he’s saying, or just wants other people to believe what he’s saying. But the circular nature of his disinformation can be seductive to people who are inclined in his direction anyway. If the mainstream news about him is “fake” and so are the non-Rasmussen polls, then there’s only one source of information you can trust: the man himself. Evil as it is, it’s as good a method as any to keep his troops feeling upbeat and ready to vote.