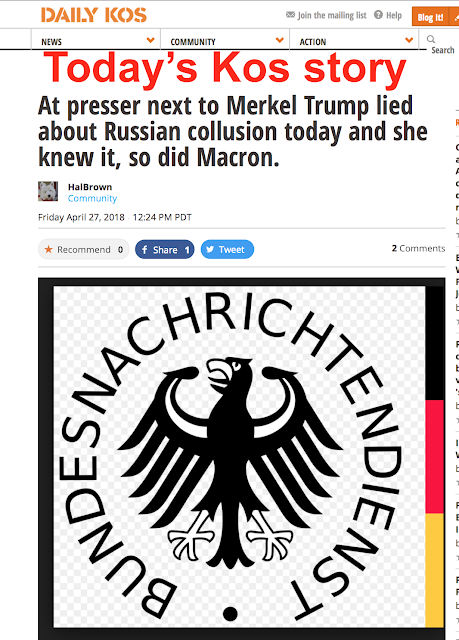 For those wondering why Ryan fired the House chaplain:


Republicans Reject Investigation Into Why Paul Ryan Fired House Chaplain Patrick Conroy was forced out of his job after praying for no “winners and losers” under the GOP tax law. We still don’t know why the head of the Department of Indian Affairs resigned.

Bill Cosby Yells At Prosecutor After Guilty Verdict: ‘You Asshole!’ Too the bad prosecuter didn't then give Cosby the Vulcan salute and say  "live long and prosper... in prison." (HB) 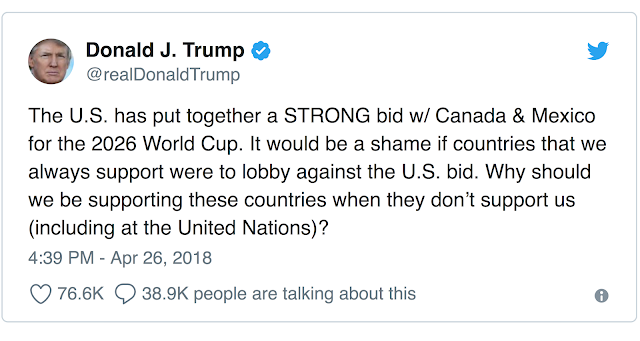 The president’s comments come as the North American campaign faces significant competition from Morocco, the only other country vying to stage the 2026 World Cup. The FIFA Congress will meet to select the 2026 host in Moscow on June 13, just before the start of this summer’s World Cup in Russia.
North America was initially heavily favored to defeat Morocco, in part because the three countries would offer dozens of high-quality facilities and require no new stadium construction to accommodate the massive tournament. Mexico and Canada would host 10 games apiece, in three cities each, while the U.S. would host 60 matches in 17 cities, according to the campaign. It will be the first World Cup with a field of 48 teams — a 50 percent increase.
But the competition with Morocco has become tighter than anticipated, ESPN reported, in part because of Trump, who has enacted a travel ban against mostly Muslim countries and drawn intense criticism for making vulgar comments about African nations. (Statements he denies making.)
The chairman of the North American bid, Sunil Gulati, said in January that political factors were complicating the effort.

“This will be a tough battle,” he said at the time, The Post reported. “This is not only about our stadiums and our hotels and all of that. It’s about the perception of America, and it’s a difficult time in the world.” Washington Post

The #ToddlerinChief thread is one year old today! Excerpts from Washington Post

I've spent the past year curating the #ToddlerinChief thread Here's what I've learned.

by Daniel W. Drezner
It would be hard to exaggerate the desperate craving many pundits possessed for Donald Trump to settle down into someone resembling a normal, grown-up president. Occasional gestures at maturity, like his joint address to Congress or play-acting like the commander in chief, were seized upon by commentators as examples of Trump growing into the office. That first tweet contained a garden-variety quote from one of Trump’s advisers characterizing him like a toddler. It seemed like a useful response to those wishcasting a mature Donald Trump.
It has been a year. From that tweet has grown 320 examples of staffers, outside advisers, Cabinet officers, treaty allies and members of Congress describing Trump like a toddler in news stories. If you don’t want to see them on Twitter, you can read them all on this Spoiler Alerts post. The sources include the Associated Press and Yahoo News. The toddler-like behavior includes demanding extra dessert and needing positive reinforcement, pure oppositional thinking and poor impulse control.
I am aware that Trump is not a toddler — he also acts like a hormonal teenager at times and at other times like an old man nostalgic for a bygone era. There are several examples in the thread of behavior that more mature presidents might display from time to time but which from Trump still seem toddler-like. A year of curating the thread has been illuminating. Here is what I’ve learned (I edited down the entries)
1) For a guy who values loyalty, Trump has the most disloyal coterie ever. My criteria for adding something to the #ToddlerinChief thread has been quite clear. The story had to be sourced to someone with a vested interest in seeing Trump succeed:

It doesn’t matter if Democrats or pundits describe the president as having the emotional maturity of a toddler. That’s just partisan politics or conventional wisdom. No, what makes these stories stand out is that these descriptions are coming from fellow Republicans on Capitol Hill in the Cabinet or loyal treaty allies or — most often — from within Trump’s own White House staff. The point is, this is how Trump’s most trusted advisers view Trump.

The amount of blabbing to the press has been remarkable. Kudos to the journalists covering Trump, without whom this thread would be impossible. Regardless of staff turnover, there has never been a dry spell in terms of adding to the thread. Trump stresses his need for loyalty to everyone. It is extraordinary how little his staff heeds that request.
2) There was never any calm period.  For Trump’s toddler-like moods, however, there has never been a fallow period. Trump’s immature, impulsive behavior has never slacked off.
3) Trump is a fundamentally lazy president. Being the president is not an easy job, but Trump barely makes an effort. Like a toddler, he needs a lot of downtime. He gets easily triggered by things he sees on television. And he watches a lot of television.
4) Trump sounds like a different kind of toddler now. The president has learned that he can reject any adult supervision and insist that he be treated like a big boy. But he still will not get his way as much as a normal president, and the bad press will persist. This means more tantrums.
5) Trump will never stop acting like a toddler. But you knew that already, didn’t you? 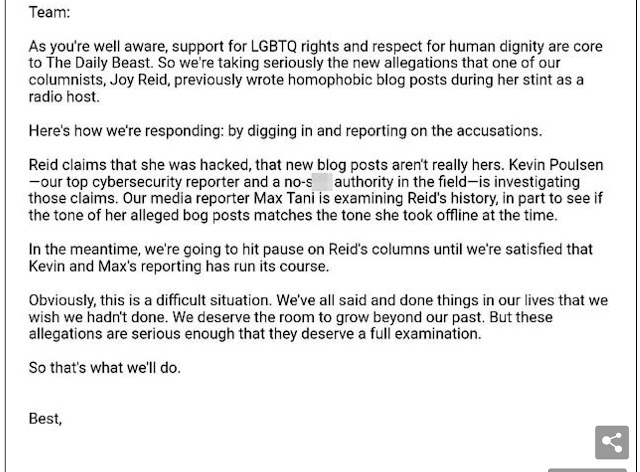 
Can a malignant narcissist with impaired impulse control Mirandize himself?


I resist getting my hopes up when I read stories like 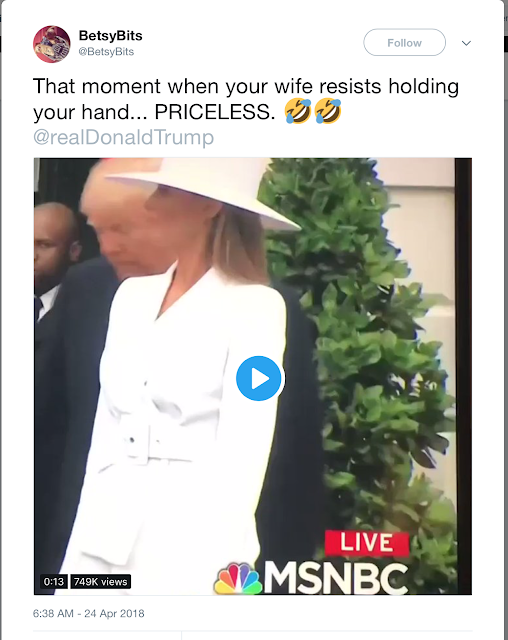 This is not the first time Trump has had difficulty getting his wife to hold his hand. Last May, a video emerged of Melania Trump slapping her husband’s hand away while the two of them walked side-by-side in Israel — and then one day later, Melania was seen moving her hand away from the president when he tried to hold it as the two were debarking from an airplane. 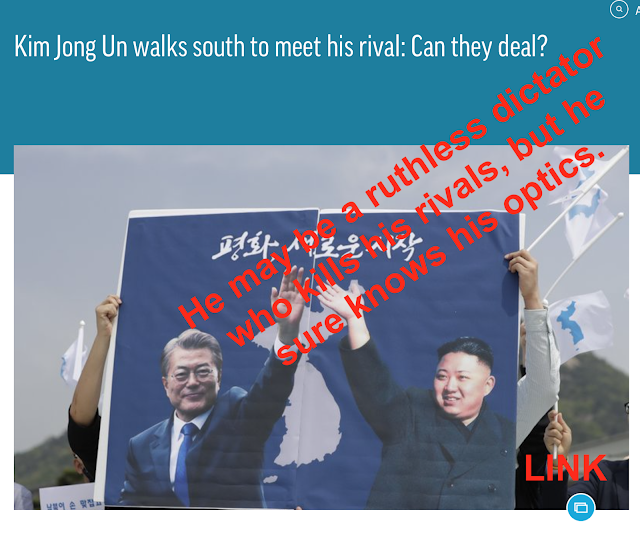 Ronnie Jackson withdraws his name, Scott Pruit goes before congressional committees, Rudy the Wretched is meeting with Mueller on The Don's behalf.

"He would represent me and represent me on some things, he represents me, like with this crazy Stormy Daniels deal, he represented me," Trump said. "From what I see, he did absolutely nothing wrong." He also said "it's a fix, it's a witch hunt." Living in Trump's mind I have to wonder about his obsession with witches and how many people are trying to find them. Trump launched into a tirade against the special counsel investigation into possible collusion between his campaign and Russia, before eventually replying: "I would give myself an A+." "Nobody has done what I’ve been able to do," he said. "And I did it despite the fact that I have a phony cloud over my head that doesn’t exist."

And then there's this:

Michael Avenati isn't afraid of Fox and Friends and Trump's bluster. Watch him on Morning Joe from this morning. He hints that the $1.6 million payout was for Trump and not some anonymous Republican donor as claimed. Mika presses him on what, if any concrete evidence, he has about the Stormy affair.

If you missed Marcon's address before the joint session of Congress where he basically repudiated Trumpism here's a segment. So much for the bromance.

But on the last day of his state visit on Wednesday, Macron showed he will not be trifled with. He used a speech to a joint session of Congress to engage in a full-scale takedown of Trumpism, wrapped in a love letter to the United States and a call on Americans to live up to the values embedded in our own history.

Macron, speaking forcefully in English, held nothing back. He warned against “the illusion of nationalism” and politicians who “play with fear and anger.” He brought home the nature of the menace by alluding to the U.S. president who led the war against fascism. “The only thing we have to fear is fear itself,” declared Macron, channeling Franklin D. Roosevelt.

Macron predicted that, despite Trump’s abandonment of the Paris climate accord, the United States would one day rejoin it. Turning Trump’s signature campaign theme on its author, the French president issued his patented call to “make our planet great again.” For good measure, he pointedly asked climate change deniers to confront the consequences if they proved to be wrong. “Let us face it,” Macron said, “there is no Planet B.”

“What is the meaning of our life, really, if we work and live destroying the planet, while sacrificing the future of our children?” Macron asked.


The veteran GOP senator and Judiciary Committee chairman is forging ahead with a Mueller-protection bill, bucking Donald Trump and his own leadership.

Chuck Grassley doesn’t see what all the fuss is about.

Ignoring protests from the most powerful people in his own party, the Republican senator from Iowa is plowing ahead with a plan to shield special counsel Robert Mueller from being fired by President Donald Trump. Senate Majority Leader Mitch McConnell says the bill will never make it to the Senate floor.

And Grassley himself acknowledges it won’t become law, but he’s presiding over a committee hearing on the proposal Thursday anyway. The move by the 84-year-old senator, who can still do more pushups than many people half his age, is a rare act of defiance of Trump in the Republican-controlled Congress.

Even so, Grassley told Politico during an interview in his Capitol office that his “relationship with the president is excellent as far as I’m concerned.”

“Now, I don’t know what he thinks about it. But that’s the way I look at it,” Grassley said. Asked whether Trump has talked to him about Mueller, he demurred in quintessential fashion: “If I had a conversation with the president, I wouldn’t tell you about it.”


The Macron-Trump Summit and the Dandruff Factor - The New Yorker

EXCERPT: The summit this week in Washington, D.C., between Presidents Emmanuel Macron and Donald Trump has caused an anxious transatlantic exchange between Francophile Americans and French observers of American life over a singular and urgent issue: the proper French translation for the word “dandruff.” The dictionary suggests “pellicules,” but that word, meaning film, or flakes, is far more generalized, and broadly applicable to things besides ugly hair-snow.

This implies either that the French have a less particularized relationship with the problem—which rings true, I can’t recall hearing it mentioned often as a problem in France—or that Americans have a specially fraught one with it, which also rings true. Though the condition exists in France, it is governed by the typically French taste for fine discriminations: they don’t treat it as a simple shoulder plague but as a subject for quasi-medical distinctions. (“There exist many kinds of flakes,” one French magazine reports, “including fatty flakes and drier flakes, according to the nature of the particular epidermis.”)

Certainly, Donald Trump’s decision on Tuesday, in the Oval Office, to ostentatiously remove a pellicule sèche from President Macron’s jacket was interpreted in France, as it was here, as one more bit of primitive theatricalizing on Trump’s part—a primate dominance display. (Among primates, the less dominant tend to groom the more dominant, though Trump clearly intended his housekeeping to indicate his, well, right to intervene.)

But Macron’s ability to, so to speak, brush it off was part of his well-considered long-range manipulation of Trump. It was obvious, and became still more so during Macron’s joint address to Congress, on Wednesday morning, that he sees himself as a kind of wise, old-world counsellor to Trump. He seems to read Trump not as a diehard nationalist authoritarian, with whom no reasonable business can or should be done, but, rather, as one would read a typical American tourist in Paris. That was clearly the measure that Macron took of Trump at the Bastille Day parade last year: not very bright, shallow, but not necessarily possessed of evil instincts if he can be gently cajoled into civilized behavior. Continued

My most recent Daily Kos stories